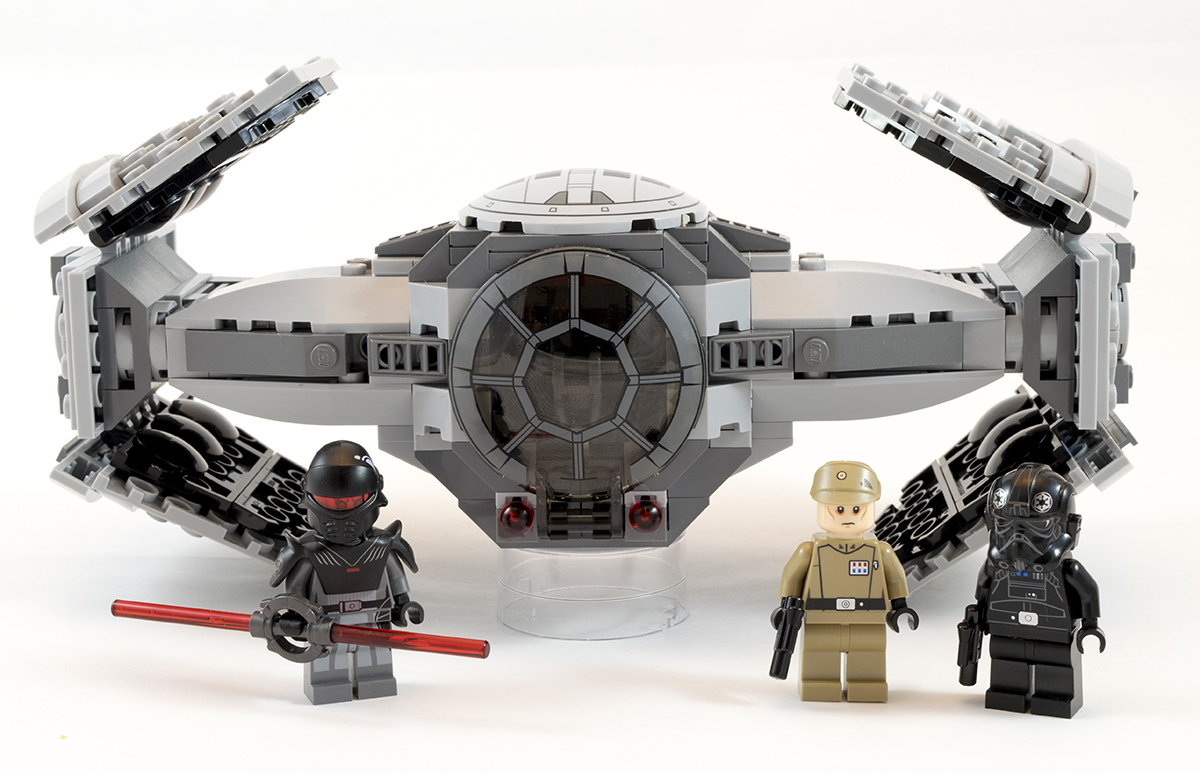 After a pretty weak start, the Rebels sets may have picked up a bit with Ezra’s Speeder Bike and the AT-DP. They’re not really spectacular, but they’re not awful either, and both added characters like Kallus and the far-future, soccer mom version of Sabine from that time-travel episode where she marriedÂ Tim Allen and they tried to skip Christmas and go on a cruise.

Of course, I just reviewed 75095 UCS TIE Fighter, so you’d think I’d be a little TIE-d out… course, I’m not sure that even exists. I love some TIE fighters, so reviewing 75082 TIE Advanced Prototype wasn’t that hard of a choice. The TIE Advanced Prototype is an interesting ship,Â since it’s far more OT designed than the PT-to-OT that a lot of Rebels stuff is. In the new canon, this is the precursor to what Darth Vader gets stuck in for a few weeks while he’s looking for a cell signal to call the Emperor and tell him the Death Star was destroyed by some farm kid that had never flown a spaceship and is now responsible for the sudden death of 342,953 people (pretty sure that the Jedi felt that one too).

The ship appeared in the show, briefly, towards the last episodes, but it wasn’t notable enough to really remember as it’s own ship. I don’t think that it was featured in the episode with the TIE factory (I’ll admit that I’m not certain about that, and that I’m too lazy to go look). The first problem with this set is the same as most of the other Star Wars sets… when you look at the final build, you don’t really see a 355 piece $39.99 set. It feels like many other sets we’ve gotten in that $30-35 range. Even on display in the stores, it doesn’t really feel like you’d be getting your money’s worth buying it at full price. Sometimes, looks can be deceiving, so maybe that’s the case here.

Oh, and there may be a few Rebels spoilers, so if you don’t want to be spoilered, skip the minifig stuff.

Normally, I’d try to immediately refute my last statement in a review, but I’m going to go in a completely different and unrelated direction. While poking around Wikipedia trying to find descriptions of Rebels episodes and see if the ship was in the episode with the factory, I clicked on the name of the guy who voices Bail Organa, Phil LaMarr… who also voiced Hermes Conrad on Futurama. Mind… blown… I’m not going to be able to watch him on Rebels without thinking about limbo and bureaucracy. 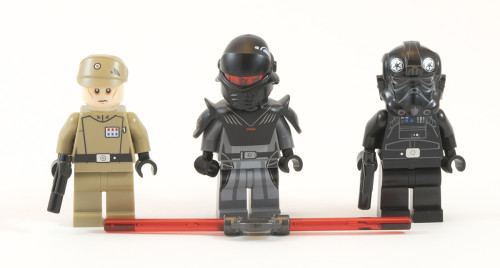 We get three minifigures in this set, and all three are unique (though I’d say our TIE buddy is more unique-ish). It feels like the right amount for a set this sized, even if the price isn’t right. Much like the AT-DP, all three figures have an Imperial bend, which is very nice to keep the focus in place. 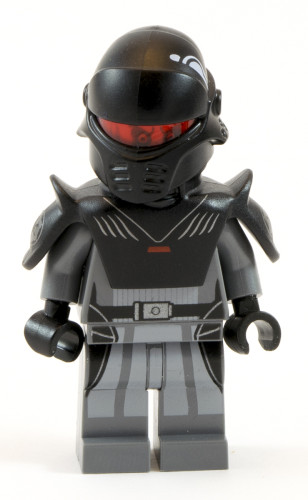 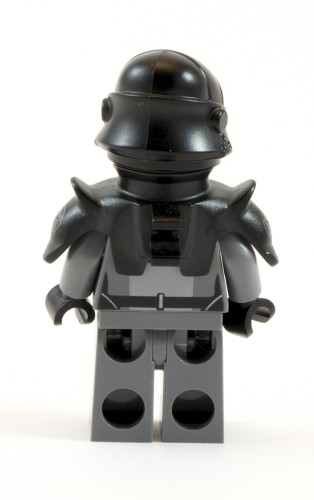 I’ll be honest, I specifically bought this set for the Inquisitor figure. I love TIEs, but IÂ liked him as a villain on the show, even if he was far more under-developed compared to Kallus. It’s just a shame that he didn’t survive the finale. Well, survive may be a bit of a misnomer, since if you’ve seen the show, you know the dude pretty much committed suicide at the end because he was scared of something “worse.” As a minifig, the first thing that absolutely has to go is that helmet.Â He wore it in the ship, sure, but that was like a minute of the full season. 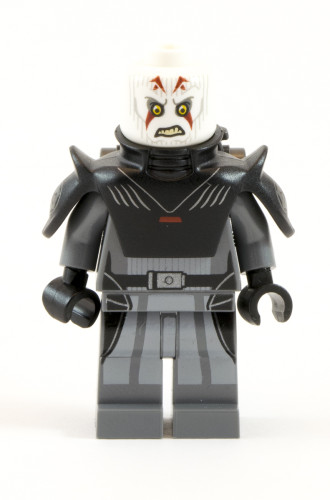 This is the look that makes a whole lot more sense for the minifig, though I think the look on the face is wrong. He was far more of an Emperor “I use knowledge and deception” kind of Sith, vs. the Vader or Darth Maul “anger is my weapon” kind of Sith. That makes the angry face seem out of place, since typically, his face was more bemusement and arrogance, especially when he was fighting Kanan. 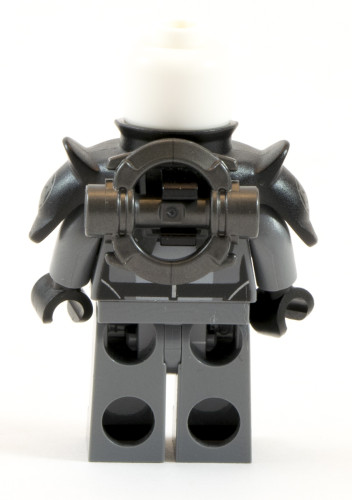 The armor provides a clip for his very unique lightsaber, which sadly doesn’t spin. You do have to love the design on a weapon like that. I can imagine the thought process behind it. “Hey, you know how a lightsaber is incredibly dangerous, and if you drop it, it can cut off any part of your body that happens to be nearby? What if we made it spin too, so it can take off other parts that aren’t near by?”

A lot of the Rebels figures suffer from the translation from cartoon art style, where they are thin and precise, to the stubby nature of the minifigure. It was especially apparent in Sabine, and to a lesser extent in Hera, and it most certainly is with the Inquisitor. I’d say the size is as jarringly off as Sabine was, even though the colors are a lot better. While I think he’s a cool figure, he just feels off. Sadly, since he’s dead, this is probably the only version we’re ever going to get. 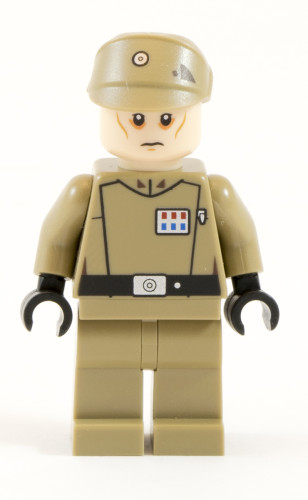 We get an Imperial Officer, who is likely CommandantÂ Cumberlayne Aresko, head of the Imperial Academy on Lothal even if his name was never given. Like the Inquisitor, he didn’t survive the first season. Of course, he was straight up executed by said Inquisitor on the orders of Tarkin for his repeated failures to do anything competently. This proves, yet again, that Tarkin is by far the most dangerous man in the Star Wars universe. 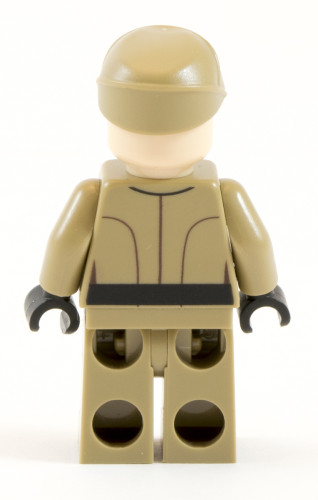 How all of the Stormtroopers that couldn’t hit water falling out of the boat in the middle of an ocean escaped this fate is beyond me, but this guy was pretty awful at his job. As a figure, he’s fine, and I like adding an older fleshy head to the mix. He’s generic enough that if you felt so inclined you could make a whole group of academy officers (or maybe just tan-uniform officers for your Star Destroyer… there’s enough gray on those things). 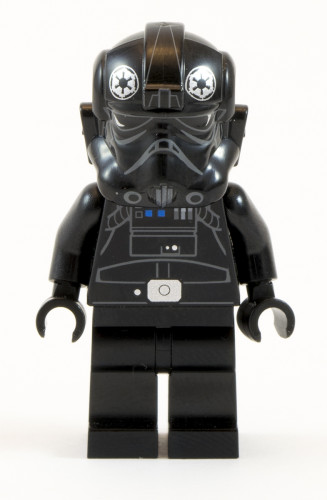 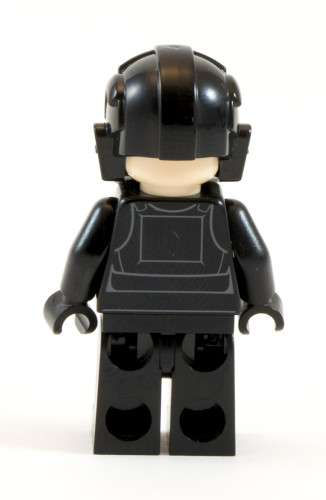 Our TIE Fighter pilot is different from the TIE Fighter pilot that comes with the UCS TIE I reviewed a couple of weeks ago. The torso printing is quite a bit different, likeÂ how the air tubes look and how they’re arranged, or the general nature of the switches and bars. It’s kind of odd that we get two different looking TIE Fighter pilots released within a few months of each other when only the most star-wars-fansy Star Wars fans are going to pick out any differences. 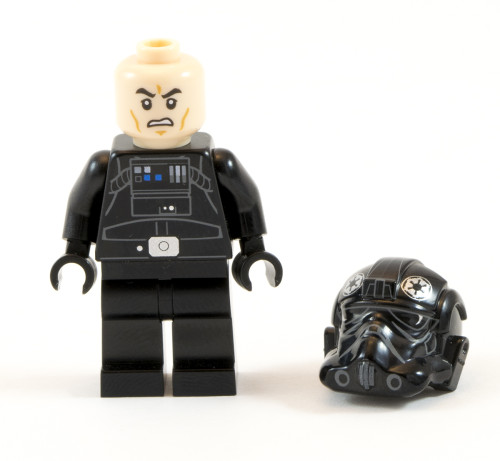 I don’t really like this guy’s inclusion in the set, honestly. The gap at the back of the helmet is as bad as the UCS TIE’s was, and the printing is nice on the helmet, but this is the Inquisitor’s ship. These guys flew regular TIE fighters, so it feels a bit tacked-on. Maybe if they would have made him more unique to being some sort of test pilot or the like, I could see it, but here, he’s just bait to get you to buy more than one of what is a unique ship. 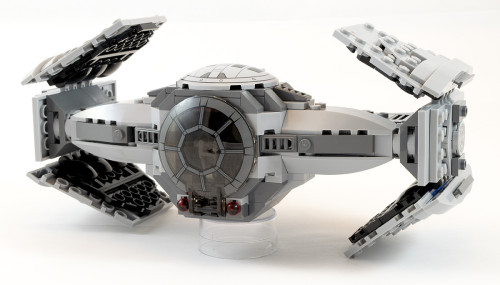 The ship itself is a nice little build that obviously ties back to the source material… which comes after it in the timeline but before it when we knew about it. Ugh, I hate prequels. Obviously, that little stand isn’t included, I was just using it to raise the ship a bit for pictures. In case you were curious what came in said stand, it was a tiny glass rubber ducky. 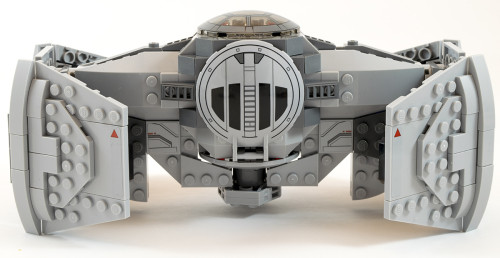 I’m not sure I’d call Vader’s TIE Advanced all that iconic of a ship, at least not in the regular scope of the movies. It was on the screen for a minute or two, tops, and most of the scenes with it featured these quick cuts where Darth Vader was trying to get the lid off a soda or something like that. 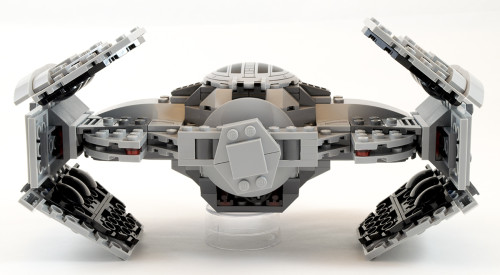 In the Rebels cartoon, this was probably on the screen about the same amount of time, but there’s still a lot to like in the build. That back section actually isn’t crooked, it’s a very interesting mechanism for triggering the long flick-missile bricks. While I’m usually harsh on wasting parts for features like that, it makes sense on this type of ship, it’s hidden and integrated well, and I really like that they put it in place of the standard lasers to give a relevant play feature to the set. My only knock is that I wish it wasn’t so lose on the turn, because it typically ends up looking crooked like that. 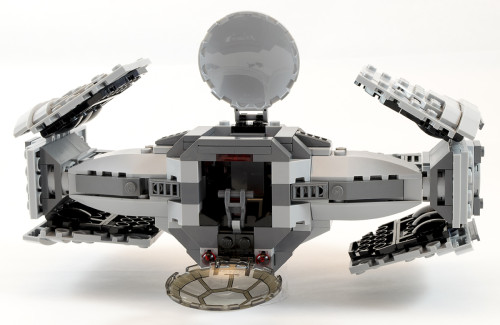 I’m a bit confused by the addition of the top opening along with the front, at least with that plate and support across the center. That support is needed to keep it from collapsing in on itself, but it makes both the front and the top openings a bit to small to do much of anything. The dishes are cool though, and I like the general effect on them more than the bit BURP-style canopy glass we used to have. 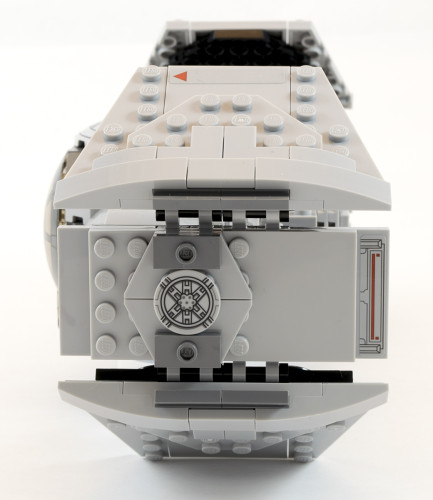 The panels on the side are secured pretty well, and have moved away from the BURP that used to connect these things. While I’d expect a premium set like the UCS TIE to come up with something fancy, it’s really cool to see it make it into a system-scale set. 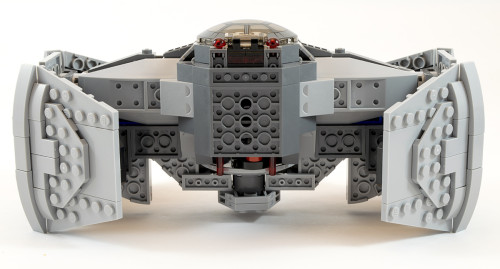 This is a fairly swooshable set to boot, though the problem with keeping the top and bottom of the panels on such light hinges is that they collapse in easily. When you look at the picture of the ship on Shop@Home, the thing just looks wrong, since they’re folded in turning it into a box. In the shop, this has a far more curved appearance, acting like a bridge between the V-Wing and the TIE Advanced more than anything. It’s pretty much impossible to get this ship to look like that in a display, unless you have a whole lot of trans bars to use for stability and don’t let cats, children, or other people near your shelves.

In the end, this is a good build with an important minifigure (the Inquisitor) that is slightly off in appearance but cool regardless. The other two minifigs are cool, and the set is fun, but when you finish building it or hold it, this most certainly doesn’t feel like a $40 set. Find it on a good sale and this becomes a very attractive ship, which is pretty much our definition of a 3 out of 5.

Verdict: A solid three out of five. You can pick up 75082Â TIE Advanced Prototype, and the rest of the Star Wars Line, at LEGO Shop@Home. 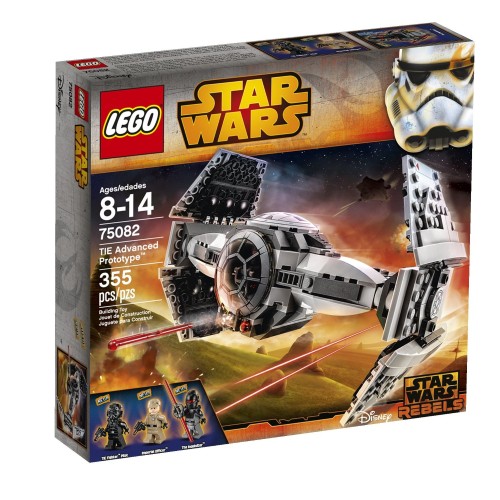