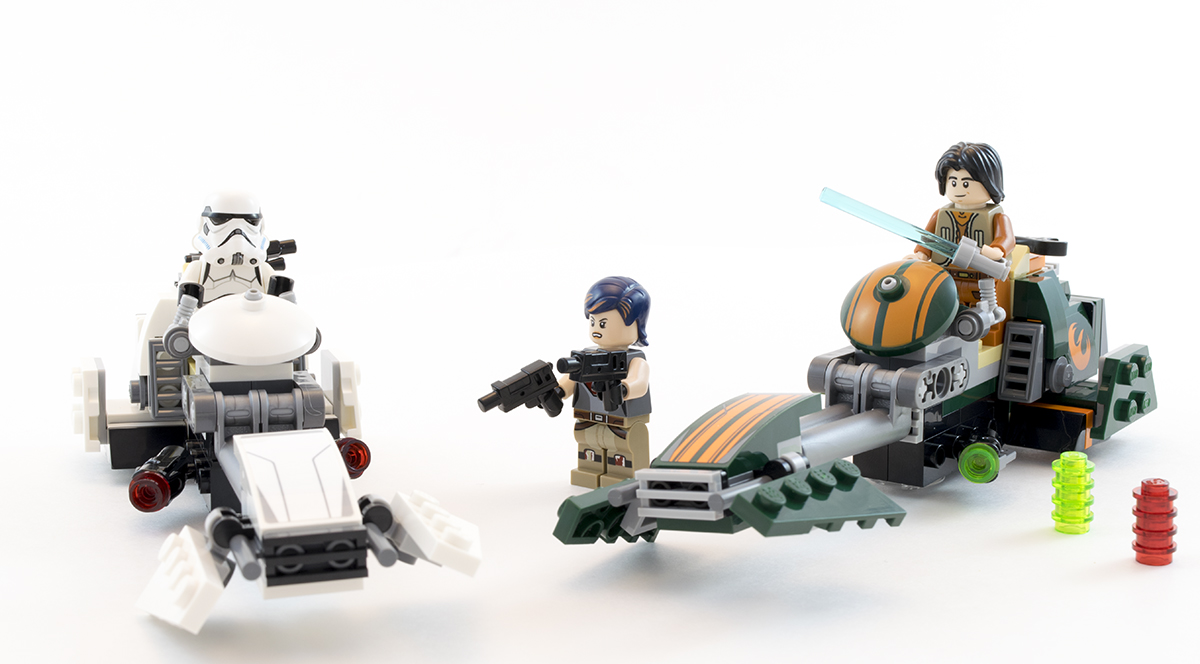 There was a really big oversight in the initial release wave for Star Wars Rebels set, and that was Sabine, our pink-wearing, graffiti-painting, kind of awesome Mandalorian. She was a main character from the start, but since there’s some sort of LEGO rule about only allowing one female character per year in Star Wars sets, we had to wait for the next release, and thank the Maker that we were gifted with a Hera at all.

Okay, that may have more than my usual amount of snark, but it’s nonsense that we didn’t get the whole main cast released in the initial wave (and LEGO certainly isn’t alone, as Hasbro has been making fools of themselvesÂ by only releasing a single figure for Hera and Sabine, only in a single scale, and saying “that’s enough” before editing the answer).Â While Rebels is mainly about Ezra, the namesake of this set, his relationship with Sabine is pretty central to a lot of things in the show now (and likely moreso in the future). The cartoon pretty evenly involves the main characters, so we needed Sabine in the lineup to get to some serious builds.

This $20 set comes in at a whopping 253 parts, three minifigs, and a mysterious sense of déjÃ  vu when you put together the same speeder bike twice. By itself, it’s sort of a forgettable sort of set, and I know that the only reason I wanted it was for Sabine and the ability to make jokes about a certain 90s alternative band that more people know the name of than know any of the songs they sang.

I was tempted to put the lyrics for “A Lifetime” here, but that song is just sort of depressing and they never had a specific R.E.M. song in mind when they referenced them in the lyrics.

We get Ezra with that weird binocular saber, Sabine that looks like a mid-30s mom that’s dying her hair to look edgy, and a Stormtrooper in that new style we also get in the Battle Pack. 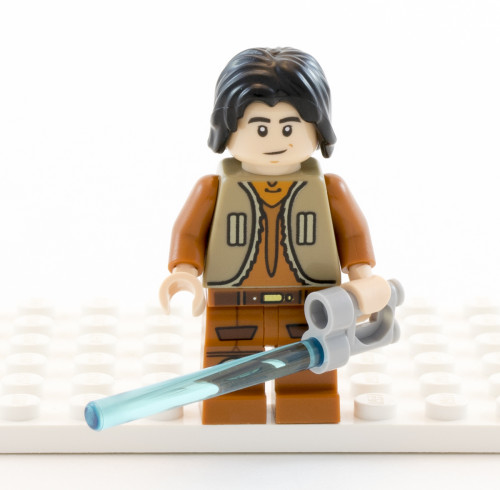 Ezra isÂ technically a “unique” minifig in the set, in that he doesn’t come with that doofy looking helmet from the Ghost set. However, since that set also included a hairpiece, it’s really just theÂ same figure. It’s kind of a curious thing in the LEGO-verse, since Ezra is, what, a 14 or 15-year-old kid in the show? He’s got a young but decidedly adult look here. 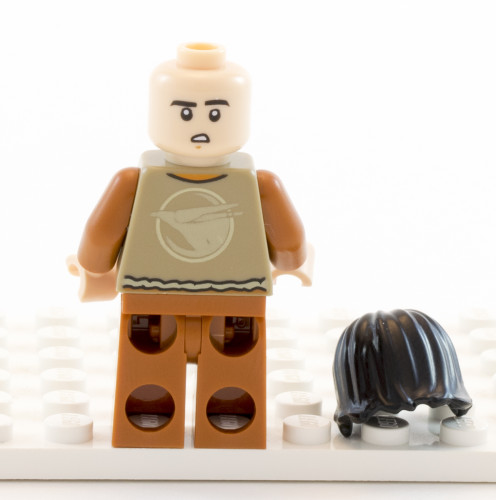 Same alt-face, same torso with that bird pattern. There’s not a whole lot to add here that wasn’t already said. 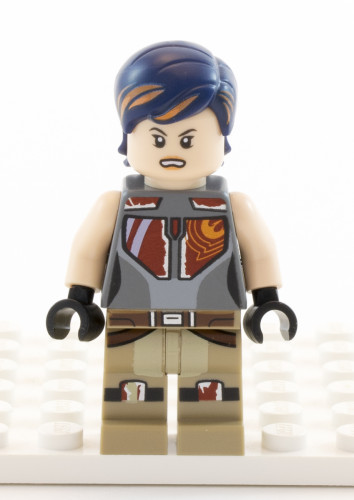 Obviously, since this is the only set for Sabine, and it was late, you’d think I’d be just ecstatic that we finally got the character… but there’s just something so wrong with this character. One is that the minifigure makes her look too old, which is a strange thing, as age rarely factors into minifigure appearance. We somehow have a figure that’s managed to put the minimum amount of detail on a face in a lego world where the details have too manyÂ details. 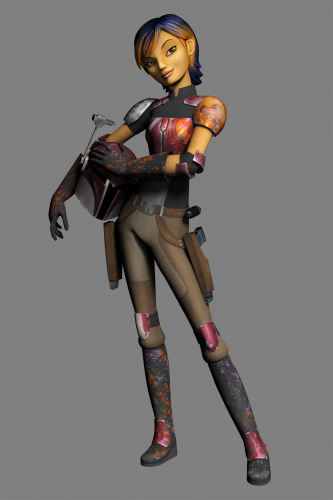 Sabine has a very distinctive look and ethnicity, and is represented as an Polynesians/Asian person-of-color, which fits to what we know of Mandos like Jango, who I suppose got similarly bad treatment… along with Clone Troopers… maybe I don’t want to crack that can of worms. This was a chance for LEGO to mix up the palette a bit and give us a great and unique character, and they didn’t do it. 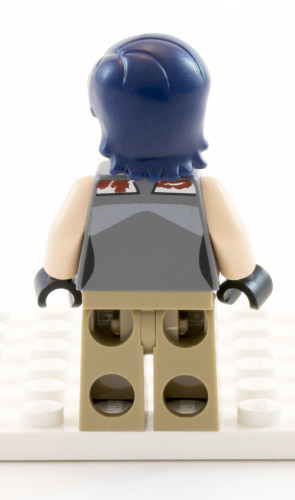 Her minifig has much more of a soccer mom vibe who’s trying to dye her hair so her kids think she’s cool. You see that character and you know there’s a minivan or a crossover SUV in the picture somewhere. Part is that Rebels has an aesthetic closer to Clone Wars, but LEGO made the humans look like regular minifigs. That means that figures like Chopper, Zeb, and Hera look right but Ezra, Sabine, and Kanan look off. She somehow feels even worse, since the armor is far too gray, and doesn’t end up looking like the character, even translated to minifig form.

Investing into character variety is actually fairly important to how LEGO does things, and they’ve done it elsewhere for several characters. This specific profile will come up again when Dawn of Justice or Justice League comes up and we get our first Jason Momoa figure… not to mention various other selections in the Marvel and DC Super Heroes world that are becoming decidedly more diverse.Â Regardless about how any of us feel about the whole Yellow vs. Fleshie fight, it’s been settled, and LEGO needs to continue on getting better at it. 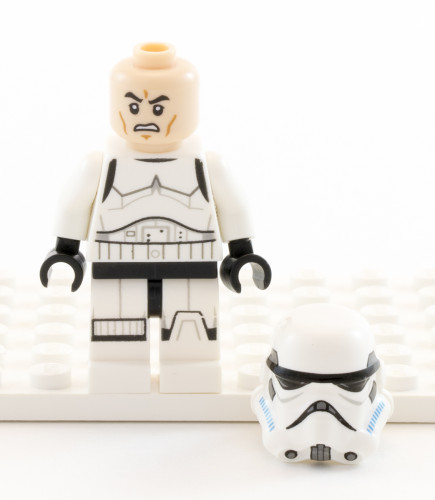 The Stormtrooper is the same as what we get in the Imperial Troop Transport Battle Pack, and what also appears in the AT-DP and the Ghost. Not much more to say about the guy that hasn’t been said.

The set itself is basically just two speeder bikes, one Rebel and one Imperial, but identical in part makeup. I mean totally identical… you basically repeat the build twice and just use different colors, which really makes this kind of a bummer of a build overall. The first bike is fun, but about halfway through the other one, you’re like “wait a tick” and realize it’s totally the same. 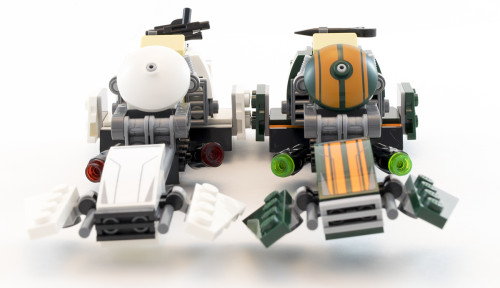 The actual bikes are very well built and solid, and a different sort of build than we’ve seen in the eleven million or so different speeder bike builds. I’d go count them up, but they’re rarely in a set all by themselves (or in the name), and honestly, I’m just lazy. Well, I’m lazy for things like that.

We did get a speeder bike in the Shadowtroopers battle pack, which was half a good speeder. There’s much more effort in this set, thanks to both the increase in price and the decrease in minifigurishness (is that a word; if not, I’m declaring it a word). There are a couple of stickers… a detail one on the back and a Rebel logo on the side. 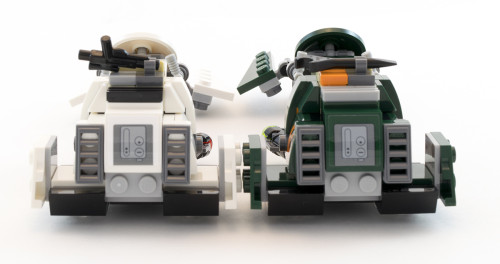 You know, I’m not an expert in rebellions or insurrections (barring my role in the “Canada Incident of 2011”), but it strikes me that if you’re putting your logo on the side of a machine, when your entire role is basically to hide and hit from the shadows, you’ve basically just stamped your vehicle with a “put bomb here” marker. Eventually, sure, the rebels will have bases and starships and things like that, so it’s a bit more crucial… but this thing can’t exactly be used for a getaway now that they’ve made it uniquely identifiable. 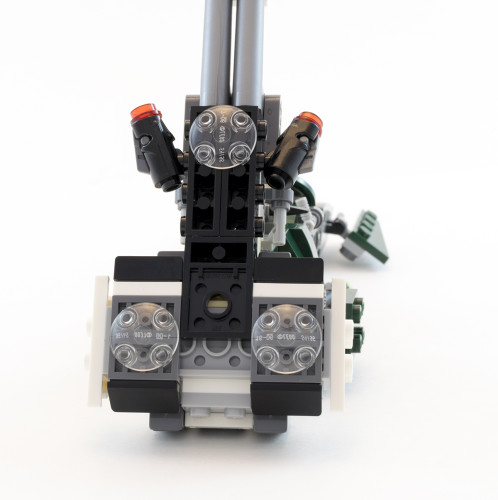 A few years back, the part makeup would be pretty interesting in this set as well, but that new part smell has worn off the inverted 90 degree plates and the new stud-blasters have been in everything. The curved tiles are quite nice, and still fun to get, and are probably the best value elements in here. There are some unique build techniquesÂ here as well, but not enough to get you to want to do it more than once (or twice, I suppose). Ultimately, the set boils down to “Sabine is the reason you’ll get this set.”

Nothing else about it is spectacular or flashy, and the rest of the figures aren’t exactly unique. If you really like speeder bikes, these will add to the unique element in your layout, but for parts there’s not a huge value, despite the number of parts you get for $20. We get Sabine, but she’s far from perfect. We get good parts value, but it’s a lot of smaller parts or non-unique things, and we get a couple other characters, but nothing that you can’t get elsewhere.

That makes this a pretty standard threeÂ out of five, as much “meh” as it is “wow.” I’d like to knock it more for Sabine’s look, but I’m glad to have her, even if inaccurate. So that’s more of a soapbox penalty. 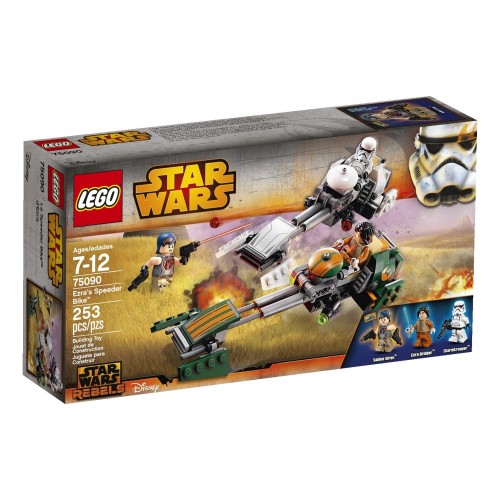