When I signed up for this set, I asked if I could just review it as a parts pack, and got told “shut up and stop your whining.” Okay, it might have just been “no” and most likely Ace has forgotten that entire conversation, but it was a quandary of a set. We’ve gotten an Elrond figure before, but Galadriel and the Witch-King are both new. Galadriel! I guess we have something to be thankful in Jackson’s changes to The Hobbit after all.

Of course, that Witch-King figure is probably the most inaccurate representation of a figure in the history of LEGO, and this whole set is a package of… “um, okay.” I think about 1/3rd of the Hobbit line has been sets that are basically just MOC parts for bigger sets, or things to add-on. This one isn’t even really a glorified battle pack, as you’re unlikely to need multiples of any of the characters, unless you really want those skeleton guys.

At $15, this is the “small” set in the lineup that’s typically been an okay spot (the real standouts for The Hobbit and LotR are typically the $30 sets). Riddles for the Ring was a good, inexpensive set, and the Dol Guldur Ambush was okay and a good source of Orcs (also, currently on sale on Shop@Home). Obviously, at first glance, this set is all about the figures… so is it worth it at the price, and do the figures actually represent the characters?

Having forced myself through all of the movies (still working on the review for the most recent one… it should be ready just in time for it to be out of theaters), I have a decent idea of all of the characters and scenes in the thing. Ace wouldn’t let me do the reviews for these drunk either, so I had to be all sober and attentive for building the sets and watching some terrible special effects.

The figure lineup for this set gets you a skeleton (which is actually part of the build), the witchÂ king as he’s pretty much never looked, Elrond and Galadriel. Honestly, this is mostly about Witchey and Queeny up there… Elrond is a nice figure but you can still find his council set around a few places. The skeleton used to be special back when those castle sets first came out, but they’ve been out in so many things that it’s mostly a meh thing. 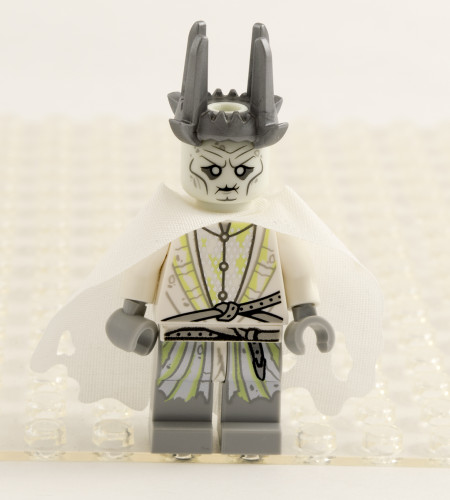 I don’t quite get the Witch-King in this set, or the look they went with. We sort of see him looking like this during Fellowship of the Ring, when he stabs Frodo while our little hobbit buddy is wearing the One Ring. In the hobbit, the Ringwraiths kind of show up for the fight in Dol Guldur, but the king is never explicitly identified, and they’re much more ethereal and ghostly… 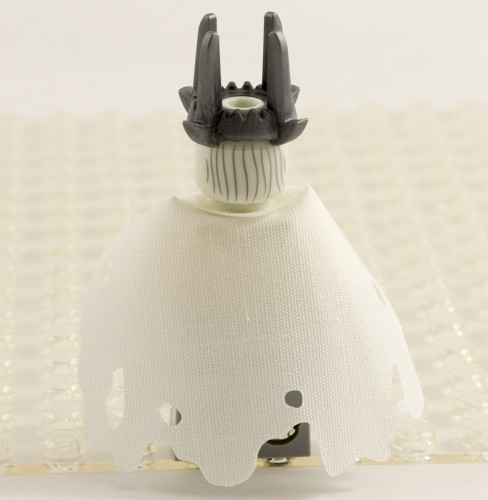 They’re also portrayed as dressed in black, much like they were throughout the Lord of the Rings. That’s why this guy’s design is just so odd. I was actually excited for a witch-king figure, but I wanted more of what we saw in Return of the King. He had a crown and helmet on there, and it could have worked out well. Enclose the helmet to cover the glowy head if you want… LEGO could have been creative here. 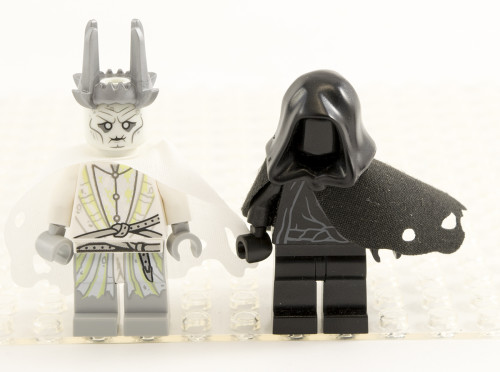 If you take this character out of context, he’s actually a cool little figure. Â The original ringwraiths were not perfect, but they were pretty cool (and the torso printing was useful in a lot of figures). This one gets some glow-in-the-dark features on the head and printing that just looks off because of how LEGO figures work. That belt and robe just looks bad in this presentation. 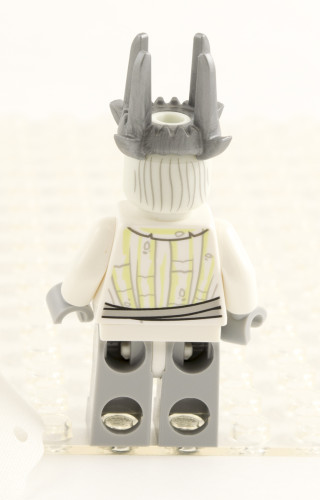 I can see all of the parts of the figure being used elsewhere. A glow-in-the-dark head under a cool hood or mask, that torso could blend into some other castle or monster stuff, and that crown fits on a stud, so I expect it to show up in unexpected places (my bet is it being used on some alien guns or the like). Â So if I was ranking this as a Witch-King, it’s a bad figure. Remove the “Witch-King” out of it though, and it’s an awesome figure. 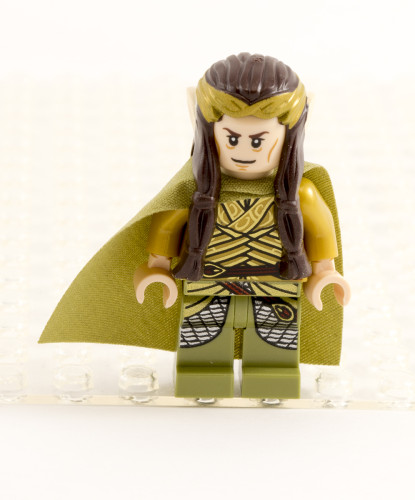 I remember when the Elrond figure was a Gamestop exclusive, one that I actually traded another FBTB member for because I loathe Gamestop and pre-orders in general. This figure is sort of a fusion of that first figure and the one that comes in the council set from Fellowship. 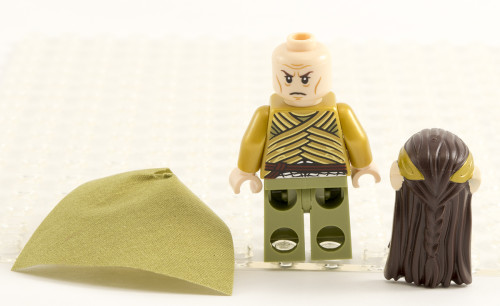 The most inaccurate part of the figure is that smile on the face. Elrond never smiled that I remember, not even when he was stabbing ghosts and orcs. The armor printing here is actually that rare time when better printing works out better. The added detail still feels LEGO-ish.

The new version uses the same face as the council figure, but it’s quite a bit different from the original one. For being an ageless elf, it sure looks like our guy aged a bit between minifigurings. I figured these guys aged backwards, if Legolas is any indication, but who knows. It’s actually a pretty neat little progression, honestly, and I probably like the latest version the best. It doesn’t hurt that we have a couple of different capes, and that you can easily use his torso to make a variety of elves. 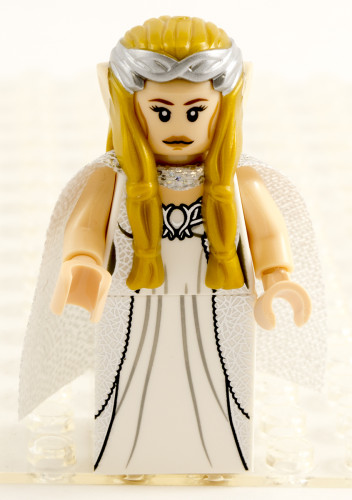 The last, and probably the most enticing character in the set, is Galadriel. Of course, she wasn’t in The Hobbit (book) but had a couple of small bits in the first two Hobbit films, and a much bigger role in the third film. As a likeness, this is a good little figure, though I wish they would have done something different with the hair other than just recoloring the same one Elrond uses (especially since said recoloring is in the same set).

That being said, the printing continues the awful trend of LEGO sometimes being great at lining it up and sometimes just being bad. I have no explanation for how the printing got so far off on part of the figure (the folds and her right side of the dress) but got it to line up on the right. Maybe this is just a bad printing batch or something, but it looks really bad when you look closely. I guess that’s why she has a sparkly cloak (which is awesome but also has the same fragility problem that Vitruvius’ had in the LEGO movie sets). 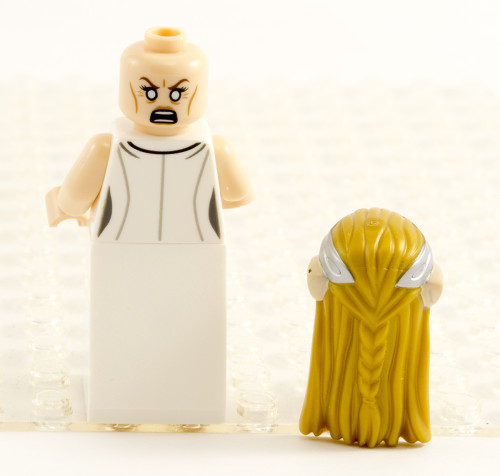 She comes with an alt-face as well, which is rather unusual. Not the eyes, her eyes kind of looked like that in the movie when she went all magic and emo… but she also tended to turn green and kind of weird looking at the same time. In the latest movie, you see her do that little “Terrible as the dawn” scene when she turns her power and smacks around the Necrosauranmancer. So, I guess she should be green or blue or something.

At this point, we’ve gotten ourselves a fellowship worth of elves, with a pretty decent variety if that’s your thing. One thing you can say about the Lord of the Rings and Hobbit sets is that there is a pretty good variety of minifigs to work with, and they’ve added a bit to the fantasy palette. Shame that all of my other castle figs are yellow and not fleshie. 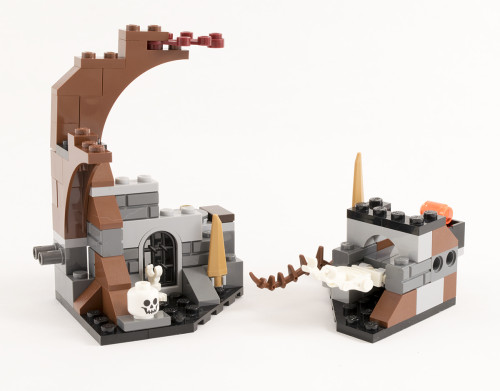 The set itself is really basic. I never did grab the Dol Guldar battle, so I’m not sure if this snaps on (but I’m going to wander out on the limb and say yes). I can tell you some things from it in the movie, in that it’s very grey and full of orcs and ghosts. 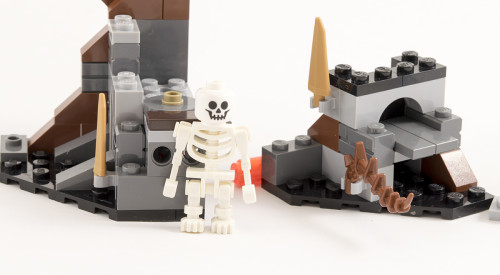 I’m not sure about catapults and skeletons though. Our skeleton buddy is actually part of the structure, not a minifig. In the picture before this one, you can see him split apart, and here assembled. The play features are mostly “eh,” since the set is too small to really do anything by itself. 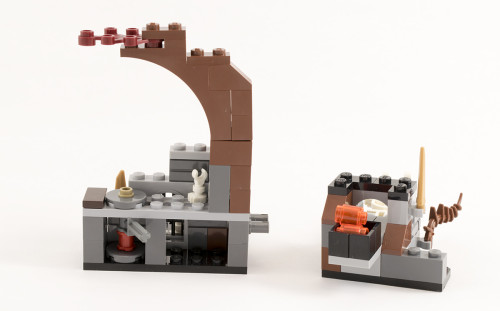 Not content to just confuse us with a catapult (that’s really just a plate on a lever), we get a little rotating plate because… I honestly don’t know. It’s one of the oddest features. It doesn’t spin around (so you can’t really swing the sword, and the tree positioning makes it so you don’t really want to battle there. This set is so insignificant it’s hard to come up with much to knock it on. Most builders (and kids) are just going to toss it into their parts bins.

Unless you’re really trying to build a somewhat pointless and annoying scene in a movie full of them, Dol Guldur isn’t a battle that will be imortalized in a bunch of great MOCs. There are a few decent parts, but nothing overly spectacular to justify the $15. It all comes down to the minifigs, which are quite nice, but this is a $12 set that LEGO wanted to see if suckers would pay $3 more (like me). I’m left wanting to give a terrible score to the set, like a 1, because it’s so insignificant, but a great score like a 5 to the minifigures (Disco WitchÂ and printing issues on Galadriel aside). I guess that makes this thing aÂ 3 out of 5, on the average. Decent for the figs, awful for the parts, and worth it if you find it on sale for a good price.

You can buy 79015 Witch-King Battle and all of The Hobbit sets right now on LEGO Shop@Home and Amazon. 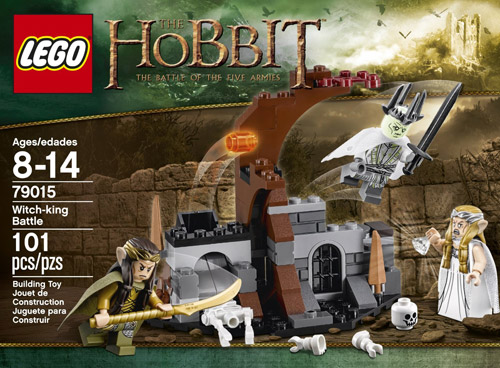