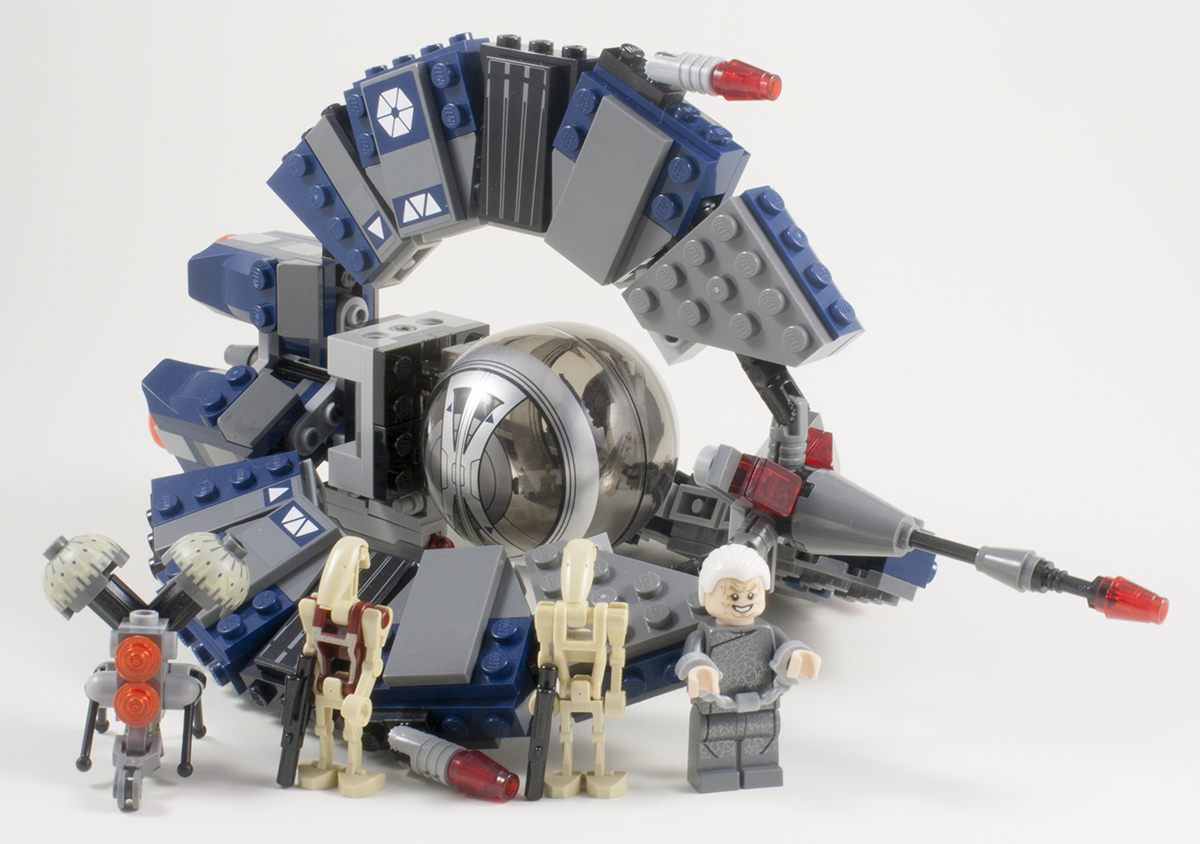 After fifteen years of collecting Lego Star Wars, and writing about them for the last eight, it’s pretty rare for me to come across a re-release that I don’t already have. Sure, there are a few, typically big sets, like the Sandcrawler or a lot of the UCS line (or any AT-AT that doesn’t have a motor)… but I’ve bought a lot of sets over the years, a lot of which I’ve liked, a lot I didn’t, and a whole lot that I’d be hard pressed to put back together. The Droid Tri-Fighter is even more unique, in that it’s a set I’ve passed on twice… this is the third release, after 2005’s 7052 ($15) and 2010’s 8086 ($25), which all had the same name. There’s also an honorable mention for 7283 Ultimate Space Battle, which is one of my “wish I would have bought that” regrets, which included the 7052 version as part of the bundle.

The 2005 version was notable in that it existed… pretty much all of the sets not called “Clone Turbo Tank” or “Clone Scout Walker” from that year are best forgotten.Â It was the first set to include a buzz droid, so I guess there is that, and, in something that is shocking in this day and age, no minifigures. The 2010 version included the orange rocket droids, which I got from that Hyena Droid bomber, and never felt a real need to get more. I kind of wish I had that secondÂ version, because it looks almost identical to this one… complete with all that lovely dark blue.

A Target Exclusive, this version adds an extra $5 on the price, drops 4 pieces (down to 262), loses the rocket droids in favor of the regular types, and for some reason gives us Chancellor Palpetine. It’s a set I obviously didn’t have a high opinion of to start with (to be fair, I basically have no opinion of it), so the real question comes down to “is it worth it, or did I just use this to get over $75 when I bought the Droid Gunship so I’d get Revan?”

I bet you can guess the answer to that question. It basically came down to this set or the walking cannon (or the Coruscant gunship over the droid one… but HarryÂ was the make/break there). Surprisingly, this ended up being the better set when they were built, which I’ll cover more. Lots of dark blue, repetitious sets that could give the wheel bike a run, and a new minifigure. I actually didn’t even realize this was a Target Exclusive until Tohst pointed it out in chat. My power to ignore this set is fairly strong. 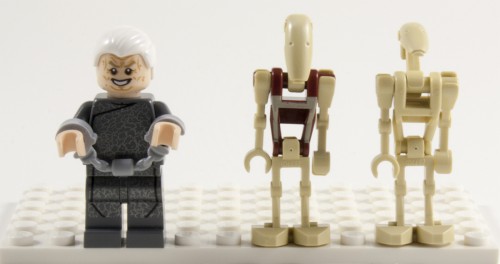 The inclusion of Palpatine in this particular set is… odd. Otherwise, we get a couple of battle droids, which is more than the 2005 version got. The 2010 came with some rocket droids, and that’s why most people actually bought the set. 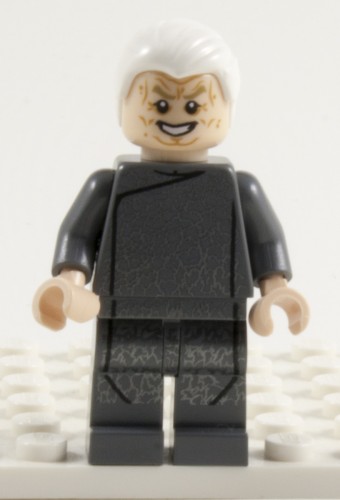 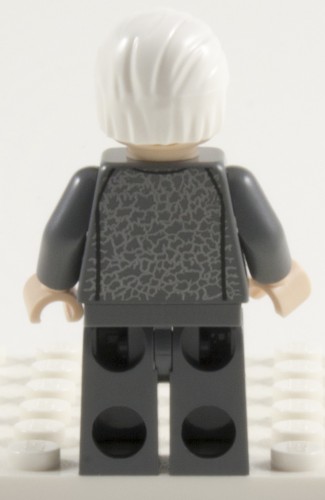 Yeah… did you think that Luke’s face in the Lego Sandcrawler had a few too many lines? He’s got nothing on our Sith Lord up there in his pre-“disfigured because why not”-face. I actually kind of like seeing him in non-Sithy form, as we’ve only had Clone Wars versions of him in the past (that look worse than said disfigured) or gray-faced. The outfit in particular is fairly cool, with a nice shiny pattern. It’d be interesting to see those turned into trooper uniforms in another setting. 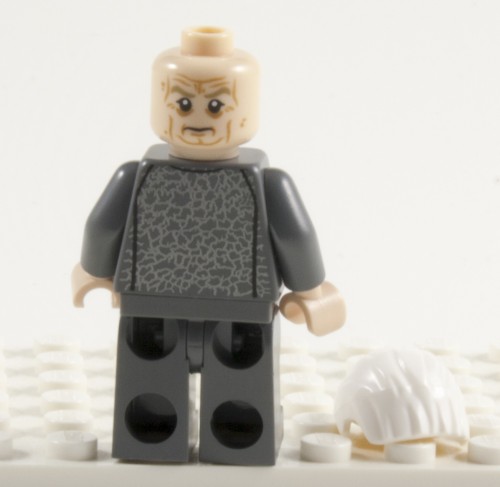 He’s got an alt-face here that could be useful in various “old guy” settings. Maybe an Archie Bunker minifig? 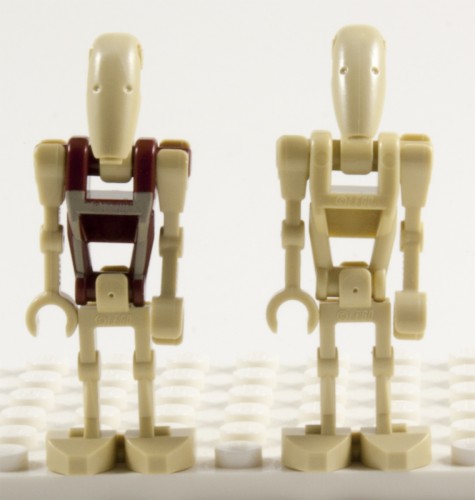 We also get Battle Droids, including a return of our old buddy, the Security Battle Droid. Forum member jnd2k3 pointed out that this guy was actually in 7877 Naboo Starfighter, another Target exclusive that based on current aftermarket prices…Â was not especially popular. I never picked up that set (because I own several of the previous remake… purchased on some nice clearance sales), so I can say it was “new to me.”

It is more notable for including a printed head, with that little red accent. Odd that he’s the only colored battle droid with that accent. 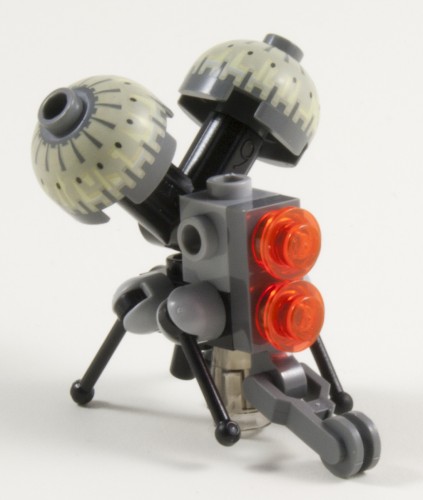 Buzz Droids are returning in force, and this guy is the same as what we got inÂ the Vulture Droid. The number of sets that include Buzz Droids has doubled this year, even if this is a newer version of it. I don’t have anything to add from the earlier review. 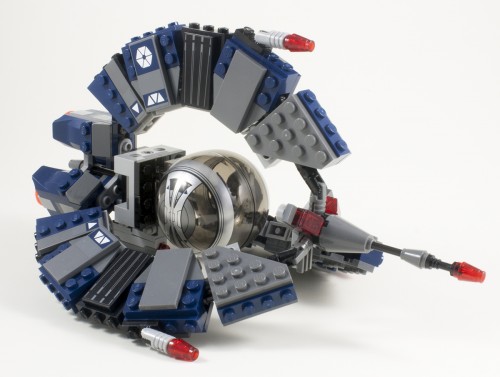 I don’t have the earlier ones to compare it to, but I’ve been told that it’s “similar but a bit bigger.” I don’t mind it, it’s swooshable and a fairly fun build. It can get a bit repetitive, since you’re basically building the same thing three times, but it’s cool how it fits together and can only fold/position a particular way and all fit together. There’s also a lot to be said for the dark blue, tiles, and hinges that you get with the set. You sticker a lot of parts, but they’re all small accents on tiles, and they’re the kind of thing you could easily move into something else. 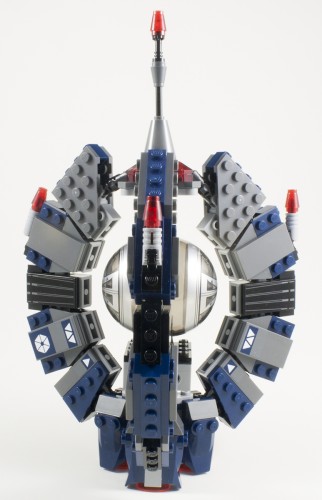 The Tri-Fighter is an odd-duck of a ship. On one hand, it does fix the whole “droid in the cockpit” thing that I’ve ragged on some other builds for. On the other, you have two big cockpit glass parts that don’t quite close and do nothing but make up the big eye. There’s nothing inside there, it’s just a big bubble. It’s a nice printing, though, and I could see that show up in some MOCs (I’m thinking they’d make good covers for turrets or observation pods on larger ships). 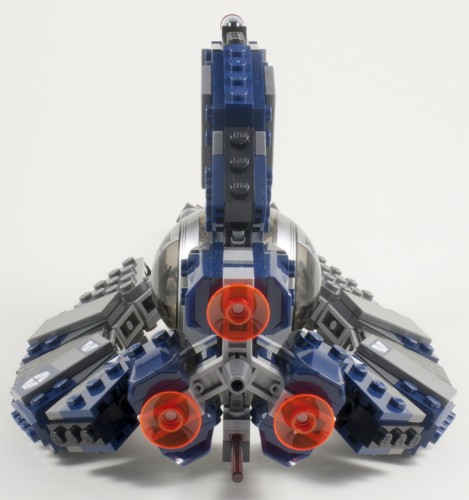 The ship does include one of the new flick-fires, because of course it does. It also has that tri-base, which I always welcome more of (and saves me from having to part out those awful Droidekas I have sitting around).

This is a simple ship that strikes me as a bit more fun as the others in the price category. It’s been released more recently than the yellow Interceptor, but like the Vulture Droid, it’s the kind of ship that you need in a horde for a good space battle MOC. Unlike the Vulture Droid, it’s not just awful and oversized. A solid little 3 out of 5 set, with a good part makeup and value that gets a lot better when on sale. The biggest knock I have on the set is that it feels a bit overpricedÂ at $30 compared to the $25 lineup, given that they’re all similarly sized. Given that it’s only 262 parts and only has one “real” minifig, this should have been at the same price point. 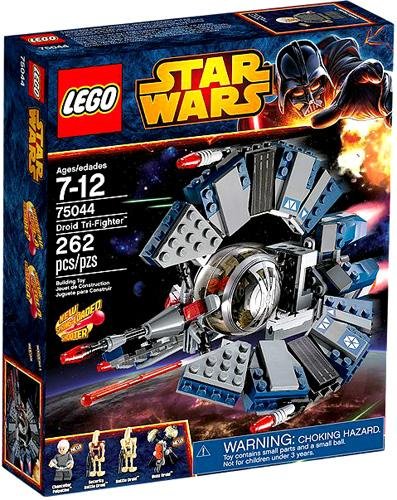