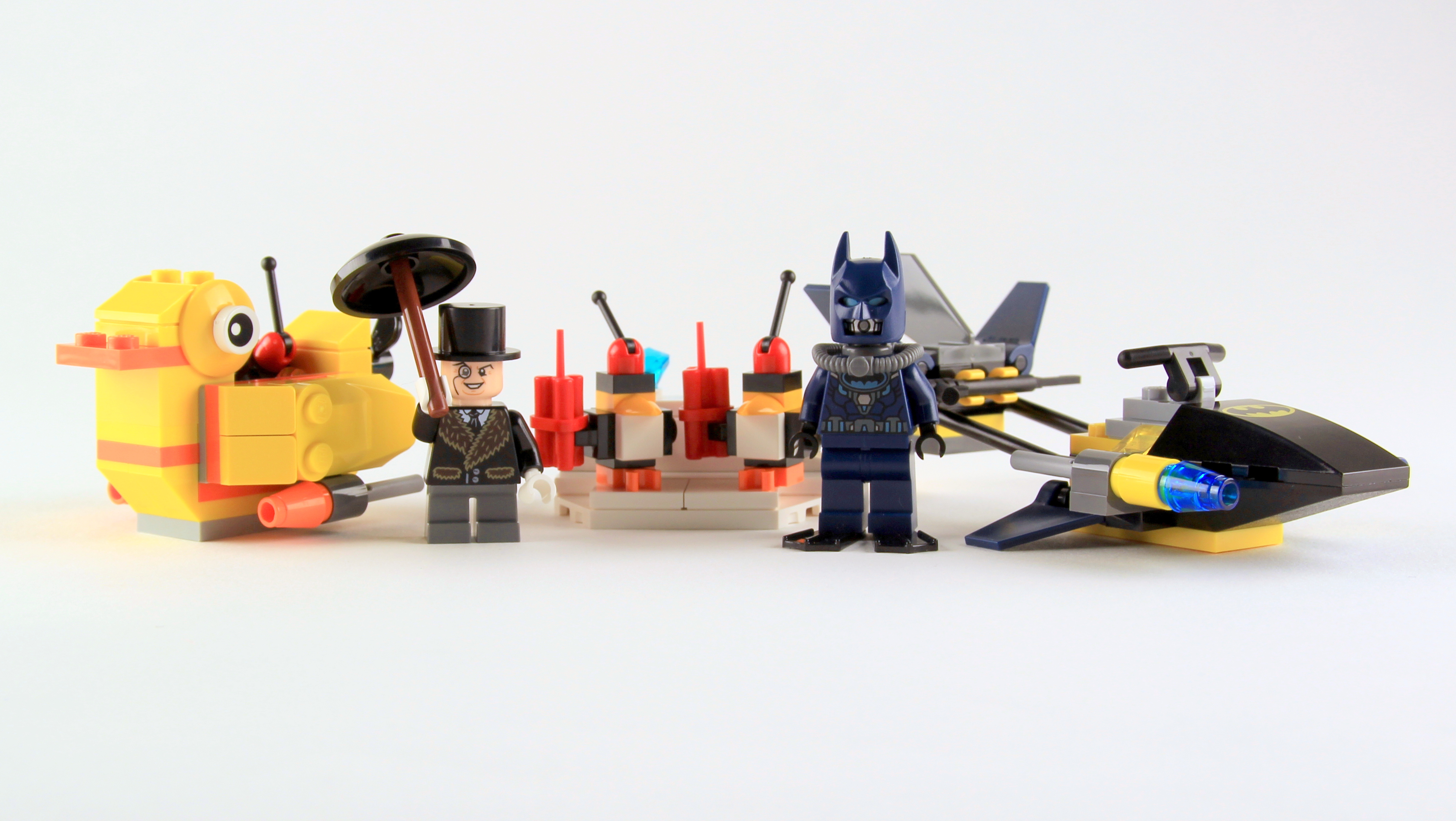 I don’t buy a lot of Batman sets. I only bought the small Catwoman and Mister Freeze sets for myself during the original run and of course the UCS Batmobile. All, ALL on clearance. I should probably mention that I have almost every one of the other original Batman sets put away for my son and those too were all picked up on heavy clearance. When the sets were first produced, I was excited in general. Batman is cool, kids love that guy! I wanted a big Batmobile and I wanted a Batman minifigure, $30 later and I was satisfied. I closed that door and threw any other set I saw on sale in a box for the inevitable arrival of offspring. Surely, a theme that seems to be so ill received won’t last long enough for my kid to enjoy it. Years later and the bat is back and bigger then ever and I have bought mostly none of the new sets. I bought the Ar(c)tic set, the new version of the Catwoman set and the Dark Knight Rises based set… only because it was on a massive clearance.

Don’t get me wrong, I love me some Batman. I have every season of every Batman cartoon I can get my hands on (other then Beyond) including Justice League, Super Friends and the DCU animated films. I even still read a Batman comic from time to time when a writer or artist strikes my fancy and that’s saying something for me, because I fell off the DC wagon in the late 90’s and have mostly only read them when I felt like I wanted to stand in a comic shop holding a book in one hand and shaking the other clench fisted in the air at the comic gods who had so vehemently forsaken me. I still count the ’89 Batman and it’s sequel as a couple of my favourite comic book films. I just never cared about the sets very much. Bat-car, Bat-boat, Bat-bike, Bat-tank (oh wait! I have that one too. It’s a freakin’ tank!), etc. A lot of the same and while I completely get that it totally fits with the whole Bat-verse to have all that. I just wasn’t buying them all.

But something happened this year. I bought every set.

Call it a moment of weakness, call it nostalgia for the 75th anniversary of the caped crusader, call it whatever you want.
I call it a rubber ducky. 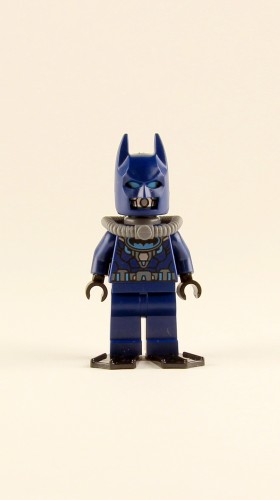 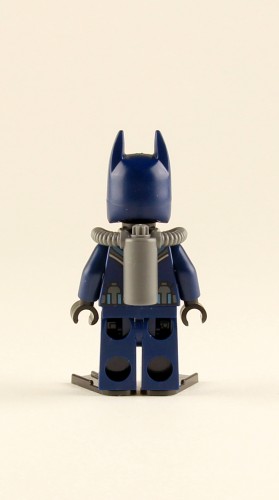 From the second I saw this little set, I knew it would be an instant buy. New mission specific Batsuit, villain only available in last year’s most expensive set AND a big rubber duck for him to drive around in. Sounds like a winner to me. Let’s take a look at those figs. 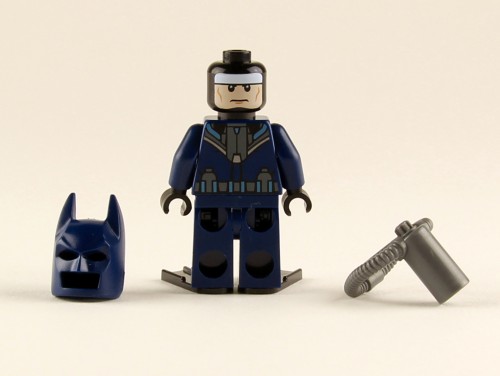 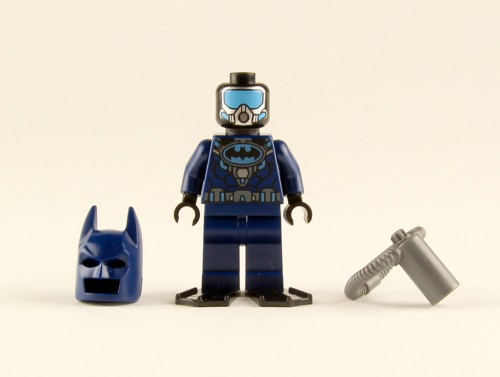 First up is a brand new Batsuit to rival the arctic suit from last year or the exclusive electro suit from the DK Batman book. This aquatic suit looks great in dark blue with light blue bat symbol and face mask, allowing the eyes of the cowl to show as light blue instead of the standard white. The dark grey utility belt with tanks in the back and a printed harness are a great way to pretend the main air tank attaches to the suit and most likely allows him to release it quickly when need be. The dive mask face is generic enough to be a robot or just a scuba guy with a wet suit, assuming you don’t need to see the back of his head. The alt face in standard with Bruce’s usual white sweat band, so it looks like he’s still wearing the wet suit but took off the goggles and breathing apparatus. Bruce doesn’t look happy, but you’d be cranky too if you had to wear a sweatband all the time, even under a wetsuit. Tank is standard, but really fits with the fig and the flippers are the same. A little disappointing to me that I can’t have him stand attached to studs while wearing the flippers. If I put him in the case I have with the others, he’d stand too tall on top of the studs and it would throw the look of the line-up off. What’s that OCD? Screw that noise… yes sir. 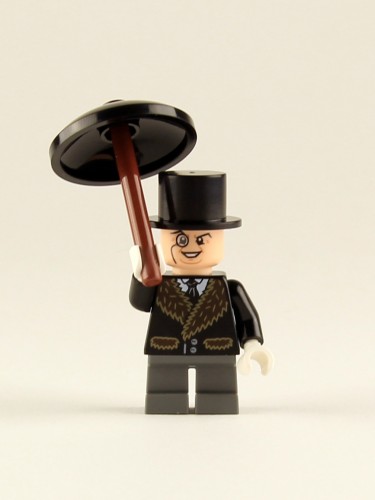 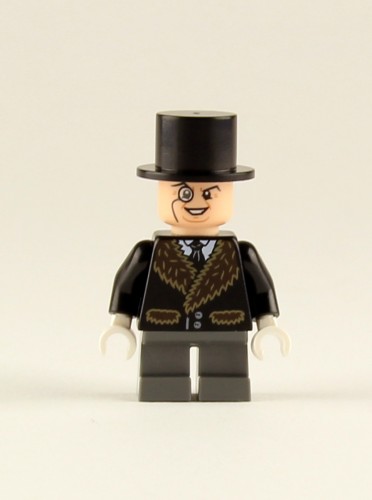 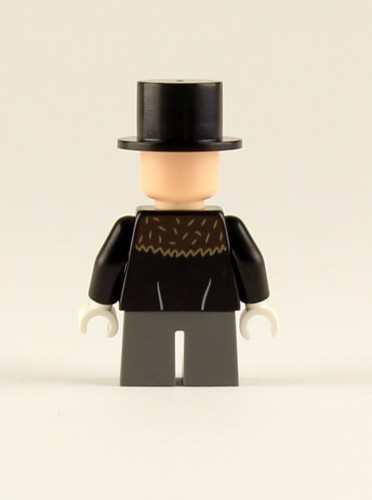 Now, as I said before the penguin appeared in the Arkham Asylum set from last year, but not the exact same fig. Head and hat are the same, but he has dark grey pants and a brand new fur-lined torso. Based on the overall design of the set, you’d be hard pressed to convince me that this isn’t specifically based on Tim Burton’s Batman Returns and this torso on the Penguin’s fur trimmed attire from the film. I love the torso and it could be quite useful for a fancy fig as there is nothing that would immediately make someone think “Penguin” when they look at it on another fig. Very useful, if a bit specific. 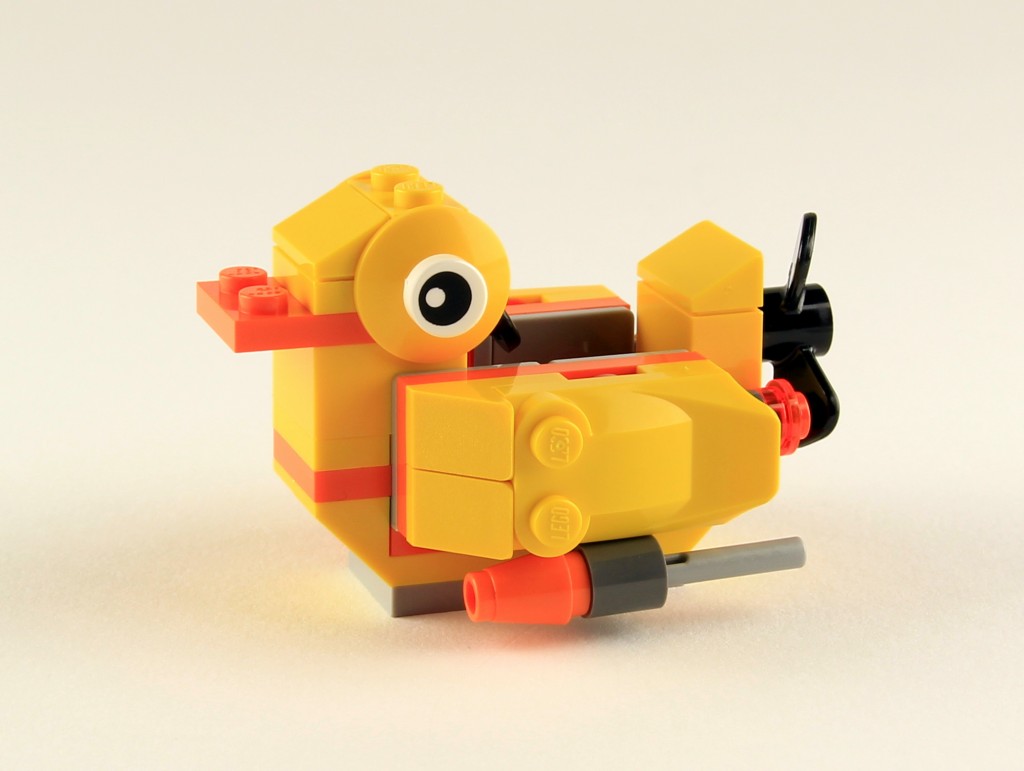 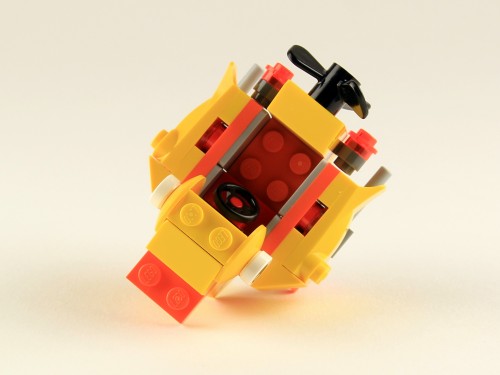 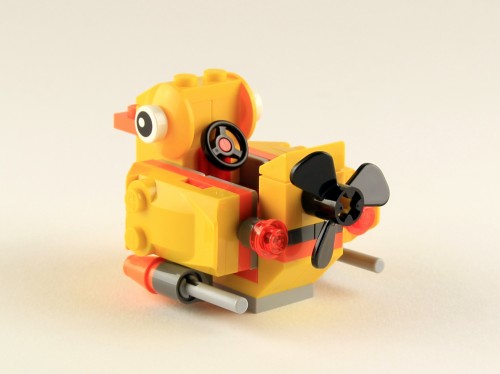 Oh Rubber Ducky, you’re the one. This is probably the cutest build you could include with a super hero themed set. It’s simple, it’s bright, it’s goofy, it’s sturdy and you know it’s going to appeal to younger kids. It looks like something you could park at Cloud Cuckoo Palace and it would fit right in. It could use a couple of tiny tweaks to punch it up a bit in the beak and wing areas, but I prefer it just the way it is. Build a few more and you’ve got a great kiddie ride for your LEGO amusement park, or just zoom it around spinning the propeller and cackling like a madman. Fun for the whole family. 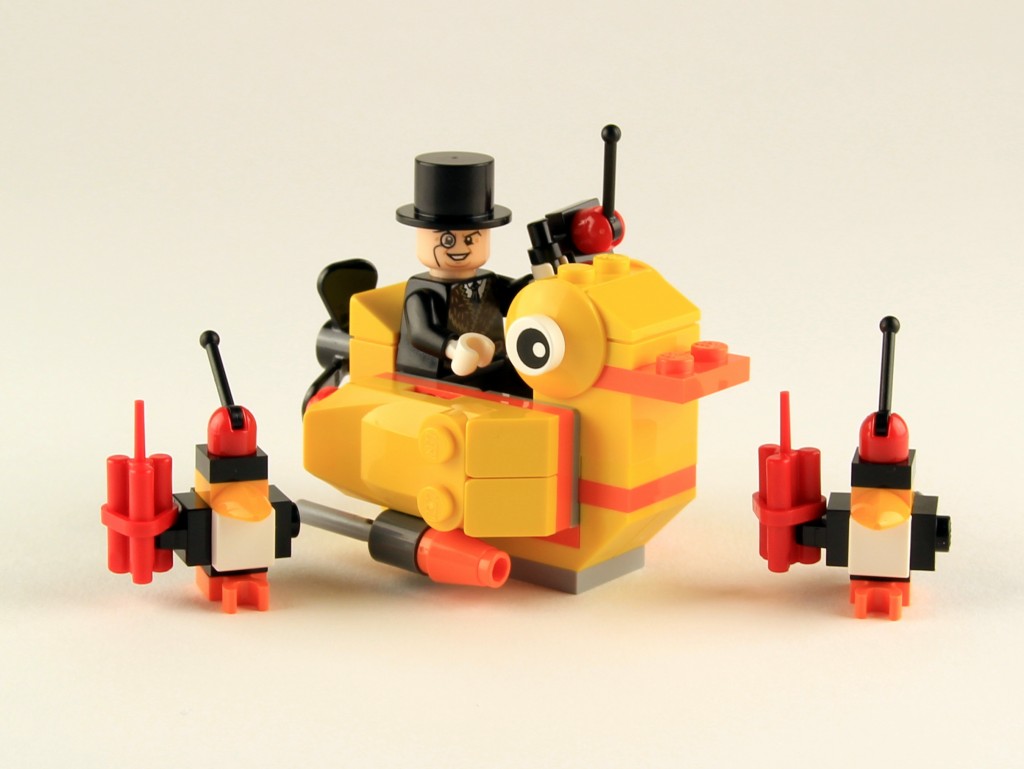 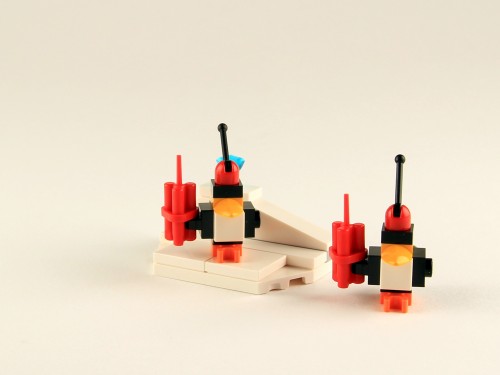 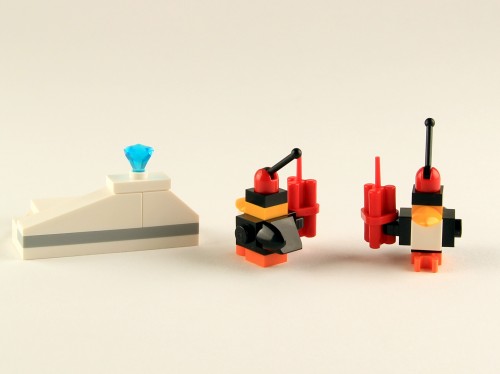 The flick fires work better here then in many of the recent sets, because the wings are on pretty tight and that clutch translates to you being able to apply more pressure. That being said, they add nothing to the look and only marginally to the play value. Enter: the hench-penguins. Or would they be min-guins? Whatever.

Basic brick built birds, just like those in often seen in creator sets. Much preferred in this context then the cutesy molded penguin in the Friends poly. Like the rocket armed ones in Returns, these little guys are packing heat in the form of dynamite and are being mind-controlled by the Penguin via a remote. Yay comics! 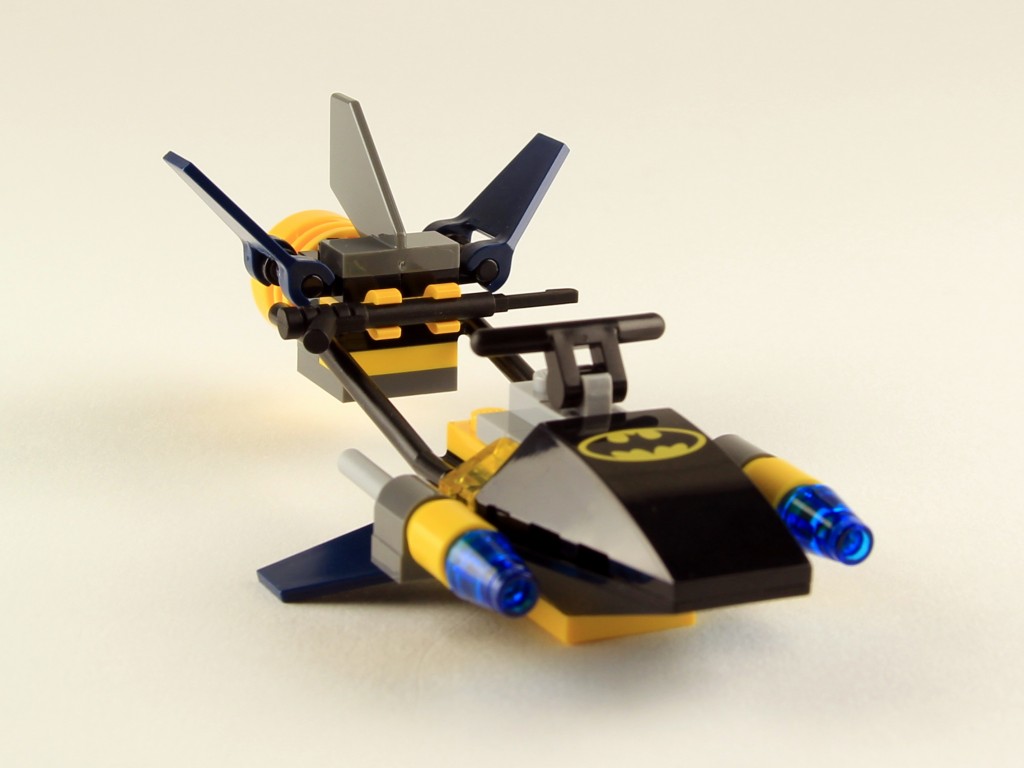 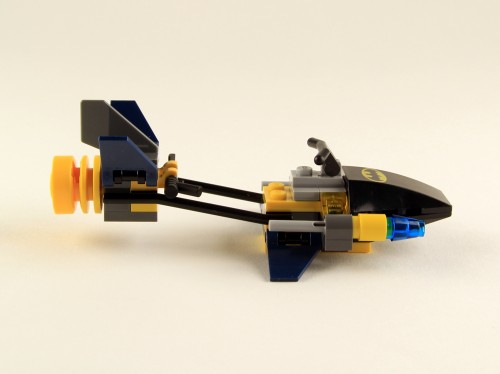 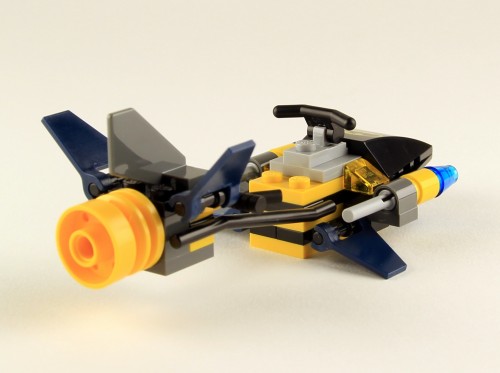 Now, with such an intense vehicle to go up against, Batman is going to need a pretty badass vehicle of his own.

Or, this thing! Woooooooooo!

As personal subs go, it’s not too shabby. James Bond would pilot it, but he’ll ride anything so that’s not really saying much. It’s actually not a bad little pile of parts and it has an interesting shape that I think fits Batman better then the jetski from the poly a while back. The highlight is the printed bat symbol on the nose, that just happens to be on the same part used for the chest piece on the Sentinel in the X-men set. You know what that means… BAT-BOT! 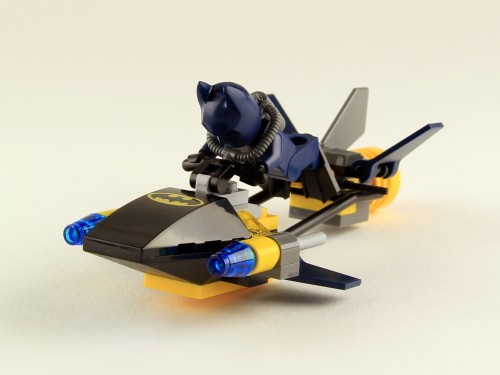 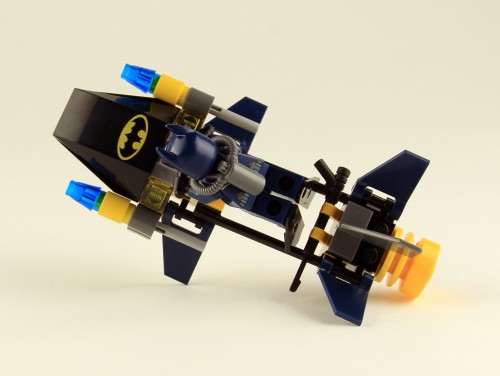 Batman looks pretty good riding it too and the balance of black, yellow, dark blue and dark bley works surprisingly well. Eye-catching as it is, I was surprised it didn’t end up off putting like the blue bits on the X-jet. There’s a lot going on in this little set and it pulls it off better then most of its size and price range.

Verdict: It’s definitely worth the money in my opinion, so I give it a 4 out of 5. The very campy nature of the set may be a turn off for those down with the new grittier takes on a grown man who dresses like a bat and fights a myriad of goofy freaks in a never ending cycle of catch and escape, but it’s a fun set and fun is fun.

You can pick it up on Amazon right now, no real discount but I still think it’s worth the price. 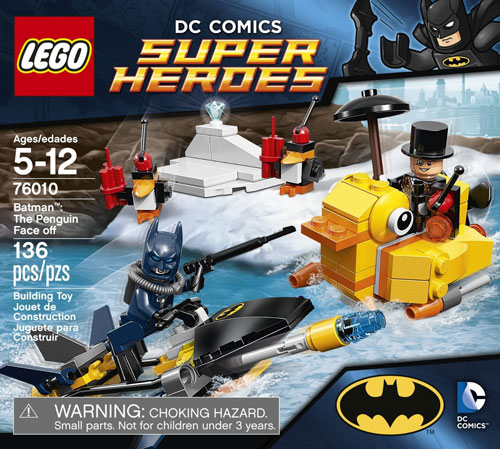