The May the 4th sales this year were a strange thing for me. I couldn’t quite swing getting the Sandcrawler, yet I owned almost all of the other Star Wars sets. After some deliberation (read, random clicking through products on Shop@Home), I realized that I really wanted the new Chewbacca figure, and I don’t really like buying them on the aftermarket anymore (inflated prices, scalpers… pick your reason). So, I settled on a pair of prequel sets that I hadn’t picked up yet… the Droid Gunship and the Droid Tri-Fighter… otherwise known as the “expensive set with Chewie” and the “dark blue parts pack” in my initial impressions.

I actually owned the original Droid Gunship, released all the way back in 2008 as part of the first wave of Clone Wars sets. Back then, it was a $30 set with 329 parts that was a big reason why most people had the initial impression that the Clone Wars sets were just… bad. It was just an awful set, with awful parts and only a fewÂ battle droids, and one that I had no interest in digging up to do a comparison. I know I usually like to do those, but I really disliked that set.

The new set brings along over 100 new parts (439 in total), loses a couple of battle droids, adds a Super Battle droid for some reason, along with Chewie and a Kashyyyk clone. I don’t even remember this thing being in the movie, so given the choices, I’ll guess it was either part of the battle for Kashyyyk or some desperate attempt to get us to buy an overprice set because it includes Chewie. Okay, that last part might be me projecting, because I totally fell for it, but this set is going to have to go a long way to convince me it’s worth $50…

Yeah, let me just say that it never manages to do it. I liked the other two Kashyyyk sets, the AT-AP and the battle pack, and felt they were both worth getting. You’ll see below how good and bad this set can be, but let’s just say at no point in time… during the build, during the obligatory swooshing around, orÂ during the photo shoot, did this set ever feel like it was worth the money. Even with little Revan sitting there, trying to go “you got me too,” this set just felt like it came up short. 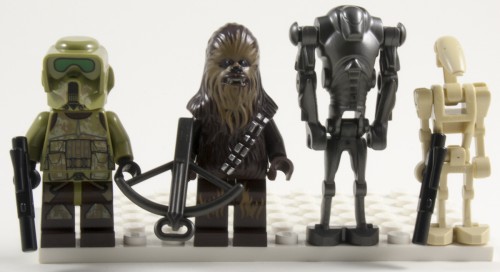 Let’s start with the minifigs. We get four (or two, depending on how you want to count a minifig)… a Kashyyyk trooper, Chewie and his 14th century crossbow, a Super Battle Droid, and a regular-old battle droid. 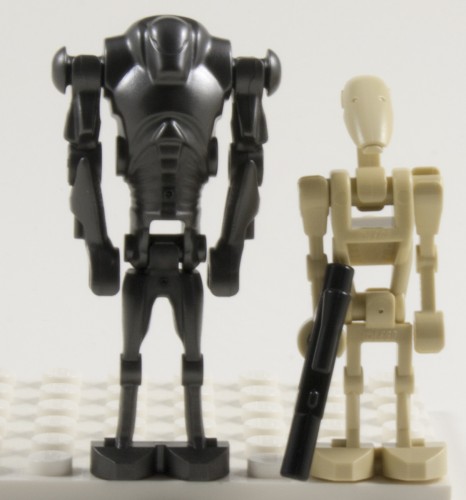 Let’s cover our droid buddies first. We get another SBD… which had been a fairly rare or generally hard to get droid for years, since it was only included once or twice per wave. We have four sets this year that include them, with the other three including multiple copies of the guy. MyÂ complaints haven’t changed on them (no gun, gun arm, or obvious way for it to defend itself)… I have nothing more to really add about him.

The Battle Droid has a similar problem. Shockingly, he’s only in one set, the $15 Battle of Saleucami… but he’s included here as a pilot (something I’ll rant about later), and he’s not even the pilot droid version. Both of these are just lazy includes to help justify the high price of the set.

Our trooper guy is the same version that’s in the battle pack, which really hurts his value. He’s the “Elite” version, which we get two of in the $13 set, and there’s no differences. The face is the same across all versions, and again, this is just kind of a throw-in. There’s not even something included in the set for the trooper to be around, he’s just there, with Chewie and a gun. 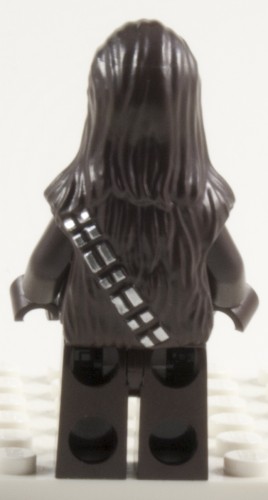 Let’s not kid ourselves, though… if anyone bought this, it’s not for the build, it’s because we want this guy. Well, okay, we wanted a new Chewie figure, the first since his inception, a fact I’ve pointed out in previous reviews. In early pictures, it looked like we were finally going to get a better rendering of our rug-inspired friend. And I guess we sort of did… there’s certainly more detail, his bandoleer looks a lot better when it’s silver, and we finally get some different tones for the hair.

It’s just that horrible, horrible grin. I want to like this figure. I desperately do. I love Chewie, even though he’s basically a set piece for the other characters. It’s just thatÂ heÂ belongs in the cockpit of my UCS Falcon, and I want the best figures for it. Originally, I wanted to say this version makes him look like he’s wearing a knock-off Halloween mask of Michael J. Fox as Teen Wolf… 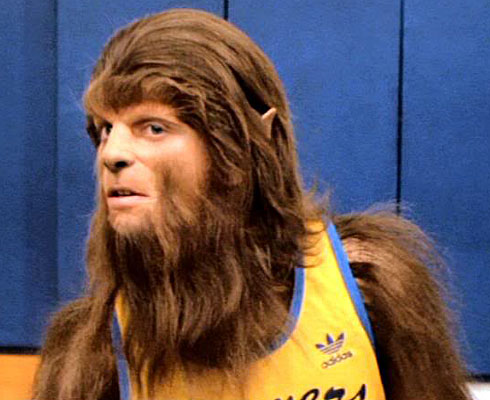 I wish I had a Shaq minifig to make into a custom, now. But buriedbybricks pointed out in our chat channel that there was a much better match, a much more 80s movie (it was a weird decade), that fit this figure. Turns out we didn’t really get Chewie in this set… we got Harry from Harry and the Hendersons. The 80s had this thing about strange and overly hairy protagonists. Harry and the Hendersons was different, because usually we had our hairy animal guys punching strange guys (sometimes they were Mum-ra). 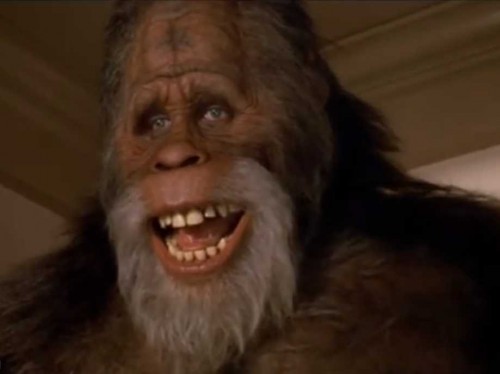 I’m sorry, but you can’t unsee that. If you really want to have your mind blow, just remember that the guy in that suit is the same guy who played the Predator in the first two movies. 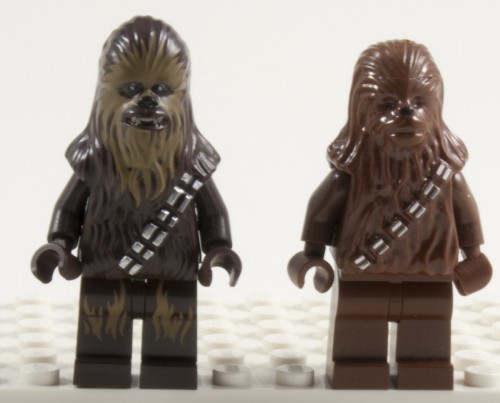 This figure does fix a few of the basic problems with the Chewie minifigs. He’s noticeably taller, the color is better with a bit more contrast, and he’s got some decent legs with that kicking flame-stripe pattern. Okay, so his bandoleer seems to be routed through his appendix (thanks Murph), but still, it looks okay, and it was something that the character wore. It’s the face that ruins what is probably the most overdue figure this side of Padme. Plus, now thanks to bbb, you won’t be able to look at it without seeing a terrible John Lithgow movie from the 80s about bigfoot.

Enough Chewie ranting, for now… this is actually a set called “Droid Gunship,” so I suppose we should cover the set. I know, it’s hard, since a lot of you are probably like me, and just dropped $50 on a set to get an 80s comedy version of Chewie, but we must go on. This ship was apparently first covered in concept art for Episode I, according to a fiveÂ second google search and a skim of the Wookiepedia page. I don’t remember it in the movie at all, but do remember it showing up in the cartoon (and usually exploding shortly thereafter).

As an overall design, it’s not an especially bad ship. It has far more bulk than the original, thanks to the extra row of large saucer bricks up top (the smaller kind that showed up with Alien ConquestÂ a few years back). The original version was basically just saucer, stickers, and annoyance. That being said… this version continues the problem of the original in putting almost all of the weight in the build into the front. That nose piece weighs more than the back of saucer section, which makes balancing it in a display almost impossible, and swooshing it feels very awkward. 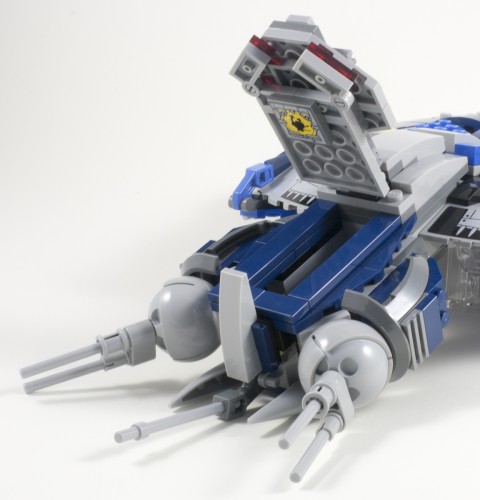 It also continues with the pointless adventure of adding a pilot to the mix, something I complained about in great length in my Vulture Droid review. I get that this is more Lego trying to add “play features” to a set, butÂ I’d like to think that kids are just going to ignore it. Robot ships are cool because they don’t need the pilot. I don’t know about you, but I spent a lot of my childhood imagining how cool it would be to have a robot friend and for everything to be turned into a robot well before Futurama ever showed us it was possible… 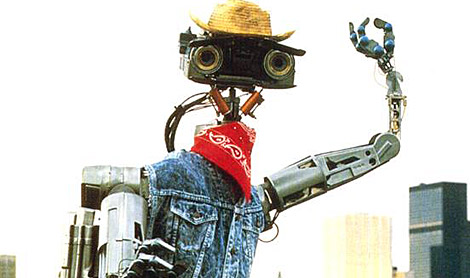 The 80s… it was a magical time for robot friends. I mean, come on… Night Rider was about K.I.T.T., not about The Hof… he didn’t get notable until he was on Baywatch and was “the guy that got in the way of us watching all the ladies run to the rescue.” What’s all this mean? Nothing. I was just enjoying reminiscing about 80s movies that are probably far better in my memory than in real life, and this set doesn’t need a pilot. 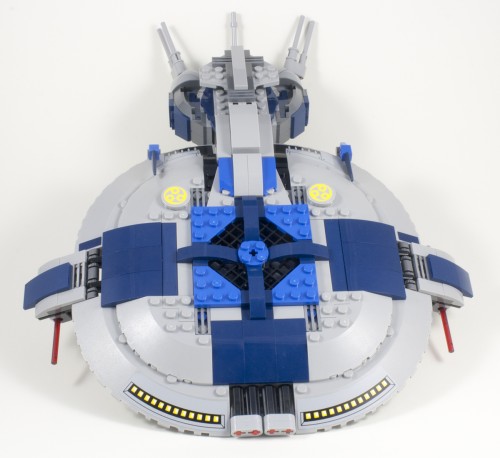 A good portion of your build time in this set, at least with the disc, goes into a complicated mechanism that is intended to launch what looks to be blasters when you build them, but are referred to as “dropping bombs” on the Shop@Home site (which also refers to the flick-fire launchers as powerful shooters). There are a few notable pieces here, all of which are dark blue and of the curvy-slope variety. One can never have too much dark blue, and it’s nice to get some of the curves that can be put to far better use elsewhere.

It’s the underside where this thing just elicits an “ugh” when you see it. I know that the underside is usually sparse, but this just strikes me as lazy, especially in a $50 set. It seems to be kind of par-for-the-course though… the latest minifig Falcon and the Sith Infiltrator both had terrible undersides, and were expensive sets. 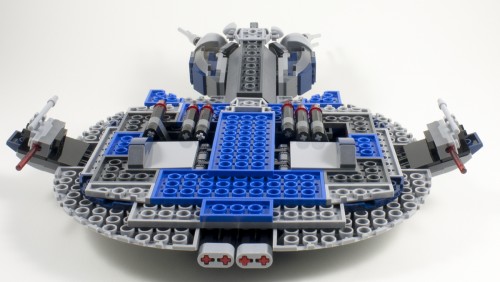 You can see the drop bombs sitting here, which are basically just there to drop and do, something, I guess? They’re shaped like blasters, so maybe they fall and go pew pew pew. Otherwise, it’s basically the flick-fire launchers on the hinged little winglets, and a whole lot of ugly plates. Shame they’re blue instead of dark blue… give me big plates like that in dark blue and this set and I could have been very good friends (before I tore him apart and discarded the waste in the sort bucket).

In case you were curious what that grid and tile was doing in the middle there, the answer is “pretty much nothing.” It’s not as bad as the original, which had a huge grill and flimsy gap in the center, but it’s still mostly for show. Don’t get me wrong, this version is certainly better than the original… it’s just that the original would have forced me to invent new numbers on our rating scale. Worse, it’s not even one of those “glorified minifigure packs” sort of sets. It’s a sub-par build with only one notable figure that ends up being a terrible figure when you get a good look at him.

Ultimately, if you want Chewie, just hit the aftermarket. This set isn’t worth it unless you see some parts you just absolutely need, you get it on an incredible sale, or you really love Trade Federation gunships (or you got a couple for the contest, I suppose). This is a 2 stars set for me. It’s got just enough value to keep it out of one, but the figures do far more to drag it down than to bring it up…

You can buy 75042 Droid Gunship, and many other sets, at Amazon.com! 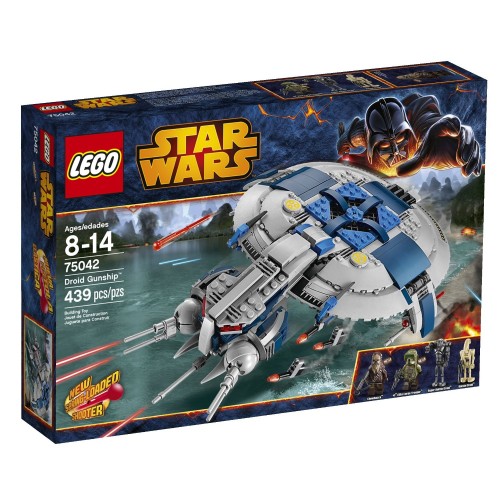