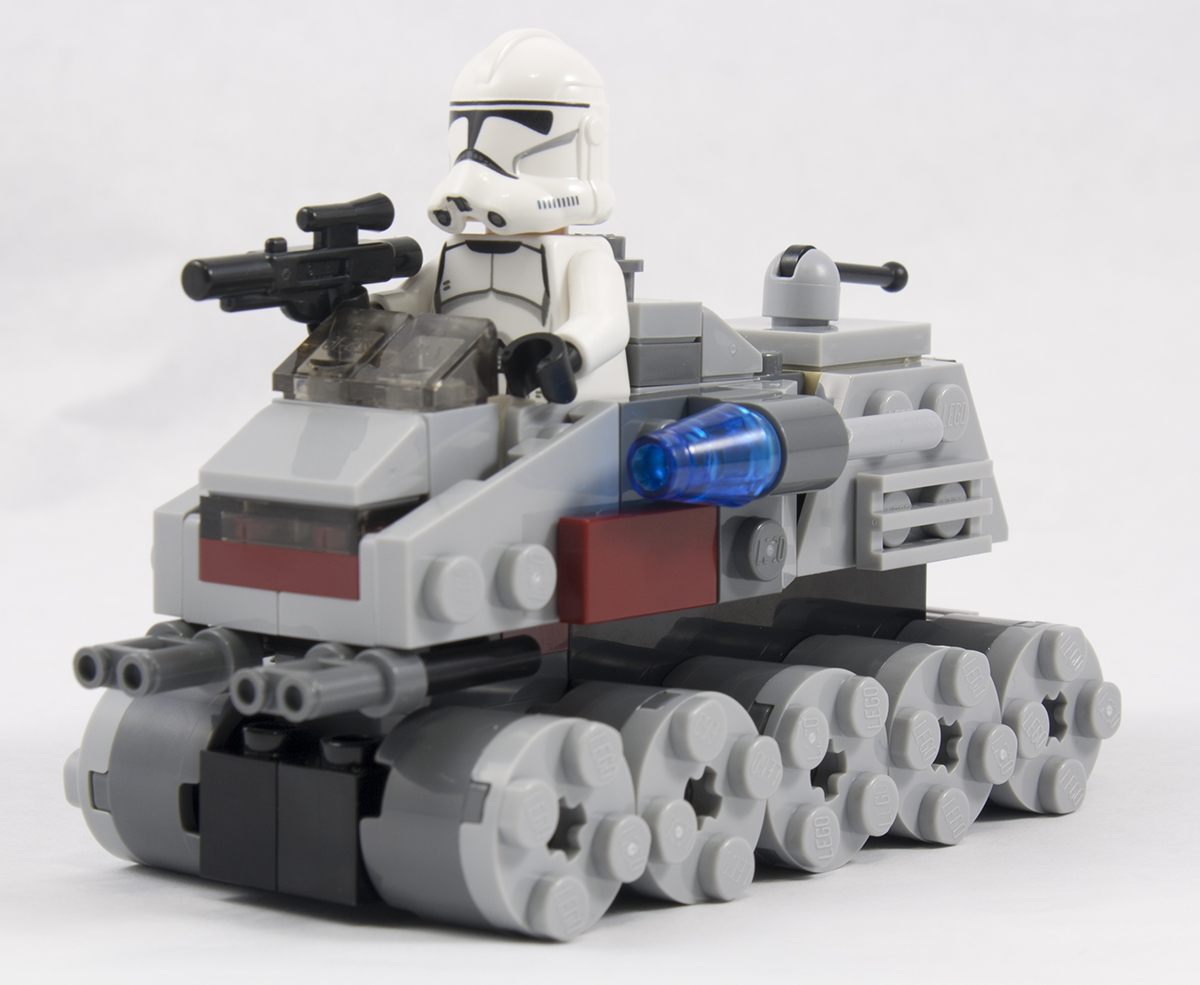 The Clone Turbo Tank and I have a weird history. As a vehicle, it was on the screen for probably less than a minute in the movie, and I didn’t even realize that it existed until I saw the Lego set for it sitting on the shelves of my local Walmart waaaaay back in 2005. It also first launched when I was in the only dark age of note I’ve had as an adult collector, from about 2003-2005, and I was never all that interested in the PT stuff anyway. Then I noticed that the set came with Mace Windu, and I absolutely had to have it! I was young and hadn’t discovered FBTB yet, so I knew nothing of the aftermarket sites and thought eBay was for people with more money than good sense (the years since have taught me that thought was true most of the time). I ended up getting lucky, and found a couple of the original CTTs on a 50% clearance, so I got my Samuel L. Jackson fix and got introduced to the aftermarket to sell my extra.

The weird history continued with the updated CTT that came out with the Clone Wars, since by that time, I’d gone on to doing reviews for the site and angering hundreds of people with my opinions. I actually had the review for the CTT lined up in a big blitz a long time back, and was doing a whole bunch of pictures on a beautiful summer day. This was before I had a decent setup or lights, so I was actually taking them outside in my driveway, because the sun is better than any lamp I can get on Amazon.com. After getting through a half-dozen sets, I set up the new CTT for pictures, turned around to do some positioning on my tripod, and heard the sound that you never, ever want to hear, and that is the connection of a large lego set and a driveway from a fall of a few feet. I grabbed most of the parts, though I occasionally still find a brick or the like in the driveway, but never got around to doing that review.

The Microfighter version is the first one that we’ve had since the Clone Wars one in 2010 in anything other than a micro format, so I suppose we take what we can get. This one is an interesting choice for the Chibi style, since the full-size sets have never been very great at capturing the original model. Much like the X-Wing Fighter, there isn’t a whole lot there, but this guy does feature an exclusive figure, for now, in the Phase 2 Clone Wars Trooper. I’ll rant about the fact that such a basic army building figure is in such a not-army builder set later, but at $10 and 96 pieces, it’s not as if this is going to be a huge hit to the wallet (unless you try it as an army builder). But are those parts worth it, or are we paying for a whole lot of 1×1 round studs?

For those keeping score at home, we’ve gotten a different Clone Wars Trooper in almost every single PT set this year. We were talking about the counts for them in chat and in one of my previous review, and I think we were up to ten or eleven, when you lump in the sets from late last year. 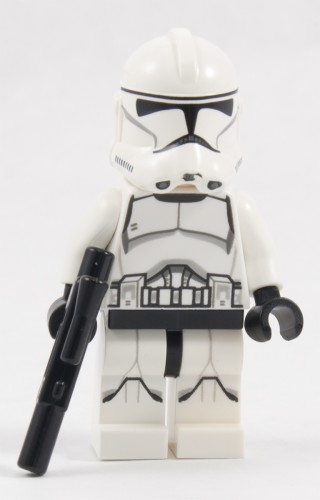 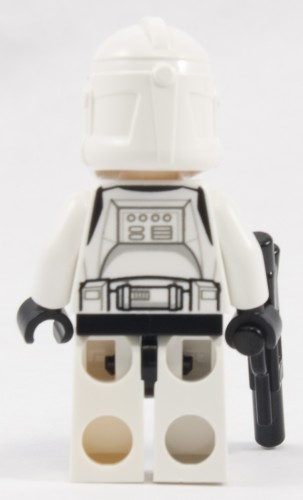 In short, madness that this guy is the one that comes in this set and the specialized guys come in the battle packs. It’s funny that the description of this set in the DK Lego Star Wars Visual Dictionary that was announced recently said that this guy was blue. Switch out a couple of the Utapau Troopers for regular guys, or better yet, just give us a whole battle pack full of these guys, and we’re just golden. 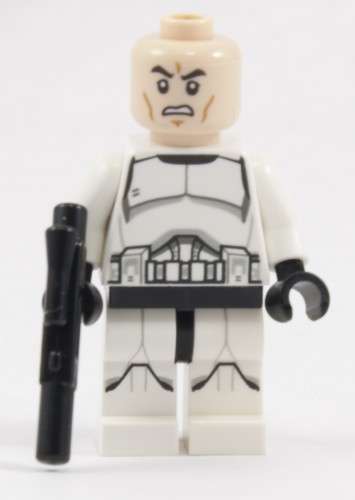 He’s just a standard clone with the new printing and no markings. If you like the new style and helmets, you’re going to want a whole bunch of this guy. If you don’t, you’re going to wish you had found that extra Clone Turbo Tank set just like I did. 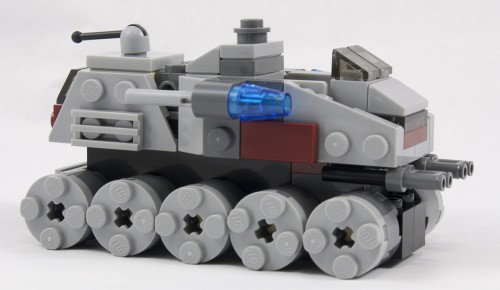 The set itself is obviously the Microfighter for the Clone Turbo Tank. I guess this one is designed to fight against the poor little droid that’s steering an AAT. I never get why you need a robot to drive a machine that’s effectively a big robot. Seems like just putting the brain in the vehicle would make it work a lot better. The Clone Wars would have been a whole lot shorter if the Clones and Jedi couldn’t keep knocking the droids off vehicles and then using said vehicles to get away or cause havoc. 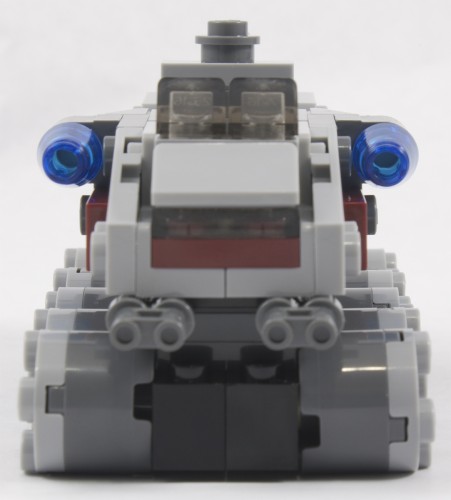 This set is a bit less impressive than the X-Wing, honestly. Sure, there are a lot of round bricks and round plates… but if you’ve been collecting for awhile, you have a lot of those. Same with the wing and wedge pieces that make up the sides. Under those, though, there are  five of the 2x2x1 inverted angular plates, and two of the 2x1x1 inverted ones. 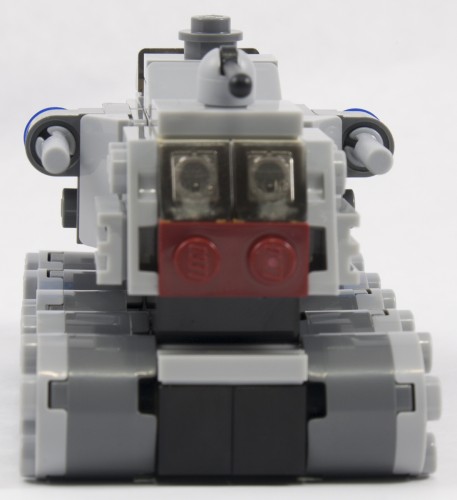 The rest of the parts aren’t really all that spectacular. A couple of bricks, a couple plates, and then a whole lot of cheese slopes, tiny studs, grill bricks, etc. Unlike the X-Wing, that had the pin-plates in white for the first time, there is nothing even remotely exclusive about the parts in this set past the Clone Trooper. If you’ve been buying stuff for awhile and part any of it out, you likely have the stuff to build one of these without ever purchasing it.

Even stylistically, this one feels a lot more off the Chibi mark than the X-Wing Fighter did. The X-Wing had some elements that felt out of place, but did a good job capturing the Chibi look in general. On this one, if you close the spot for the Clone and make the wheel bricks into plates, you basically just have a CTT Mini. That’s really the frustration with this set. They took a very generic, basic, “You’re going to want a lot of figure” and slapped it into a very “meh” set. Hopefully he shows up in some different sets, but that depends on how much the PT and OT stuff exists in our coming Rebels dominated future. Hopefully we get a battle pack that’s good for army building again, because I have trouble recommending this guy for that purpose.

Verdict: 2 out of 5. Nothing spectacular in the parts, a nice figure that’s not $10 nice, and a set that could have certainly been made to look more Chibi than it does.

You can buy 75028 Clone Turbo Tank and the rest of the Microfighters line on Amazon.com. 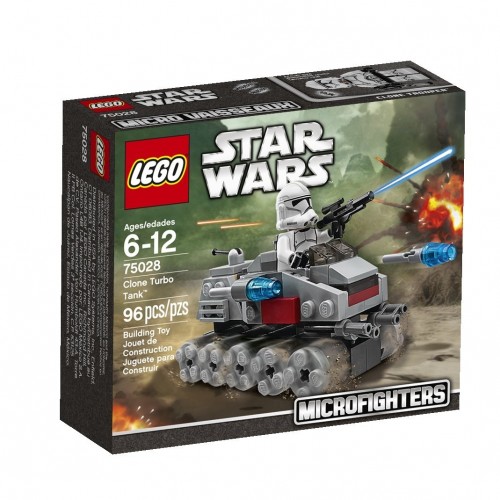