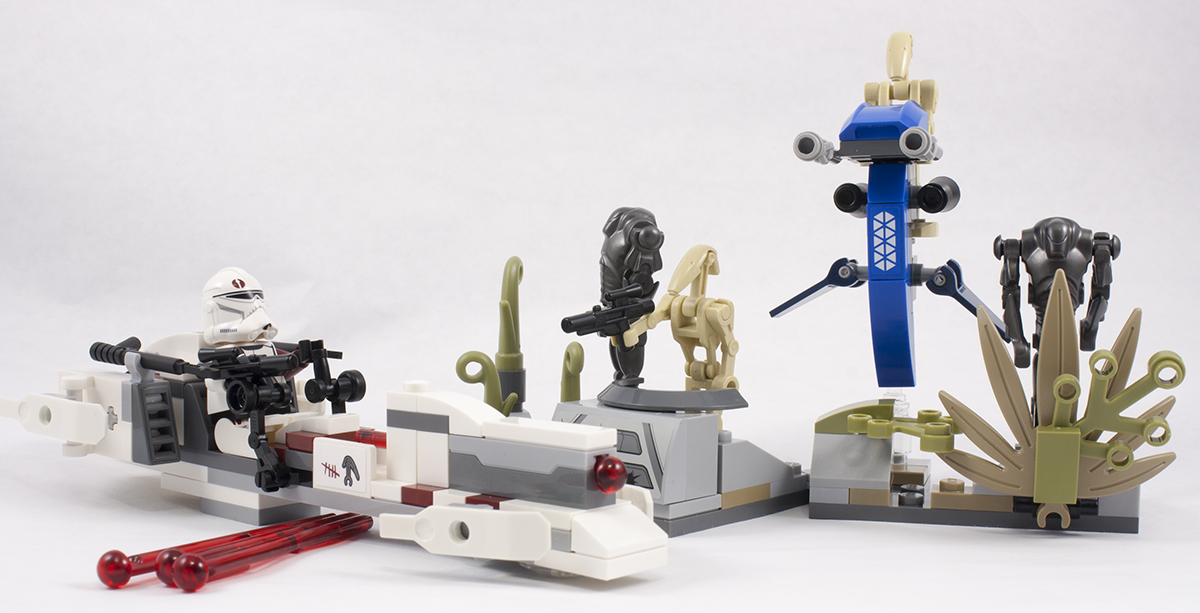 When is a battle pack not a battle pack? The obvious joke answer is “whenever it’s one of the crazy minifigure assortments in all the other sets,” but that’s too easy. Maybe when a set is focused on a few figures of the same type that can be used to build an army, and more than that, battle? Nah, can’t be that obvious.

Battle on Saleucami is an odd set. It’s battle pack sized, but marketed as a regular set. At $15, it’s the first set at that price point since 2005’s Tri-Droid fighter (or 2006’s $16 A-Wing), and sort of sits in a strange place between LEGO’s $12 battle packs and $25 base sets. 183 pieces is certainly nothing to sneeze at in a small set like this, even if it’s heavy on battle droids over regular minifigs (you get one, a Clone ARC trooper).

At first, I figured this was kind of a throwaway set in the lineup because Lego didn’t want three different battle packs for Clone Troopers. After building it though, I’m thinking that this should be the benchmark for all Lego Battle packs. It combines some very interesting and unique play features with some good builds and decent army builder figures (assuming you’re building a droid army, that is).

This set, more than probably any other Star Wars set, is designed with “play” in mind, and to show off the new flick-fire launchers. The launchers are in just about every 2014 Star Wars set that’s not a battle pack (Grevious’ Wheel Bike doesn’t have them either), and they’re going to end up being almost as common as flick-fires if you buy and part out sets.

This set isn’t listed as a battle pack, but $15 for 5 minifigs certainly qualifies it as one. Sure, we only get one clone and the rest are droids, but still, that’s a lot of builder right there. I don’t think it’s fair that a droid gets counted the same as a minifig on value or cost, since they’re a whole lot easier to made and generally less plastic than a minifig. That being said, it’s still nice to just get some normal guys, and I wish they’d do the same thing with Clones. 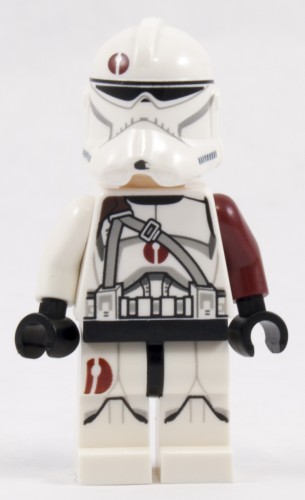 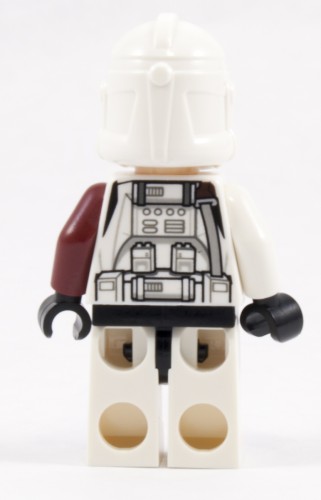 The clone we get is a BARC / ARC trooper. Shop@Home says BARC, the originally was typically called ARC, and Brickset just says “Saleucami Clone Trooper.” Really, he’s just the clone that gets to shoot a lot of battle droids while sitting on his speeder bike. We’re still in the theme we got in the battle packs of more elaborate printing, new helmets, and some customization. Mismatched arms are interesting, and not especially common. 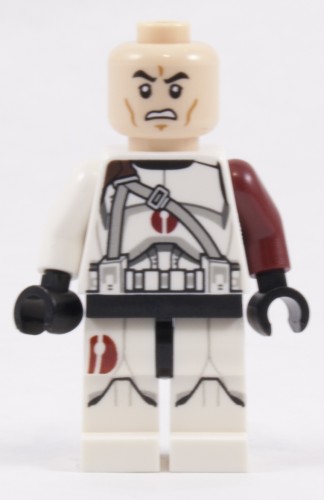 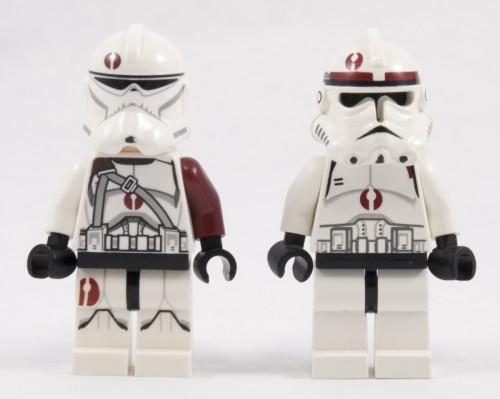 It’s odd to think that the original trooper is nine years old at this point. The Clone Scout Walker that came with this guy originally was a budget $10 in the era before battle packs. It was actually a pretty nice little set that I owned several of, which was shocking, cause I was a whole lot less capable of buying a lot of sets back then. Guess $10 makes impulse buys easier, and Lego is counting on $15 being the new $10? We’ve had quite the discussion on the forums about these new helmets and the height difference. Maybe Clones are just genetically engineered to look out of their eyebrows (that or they could just redirect the vision from the visor to a HUD screen). That or it’s more about the look of the helmet and not matching up alignment. 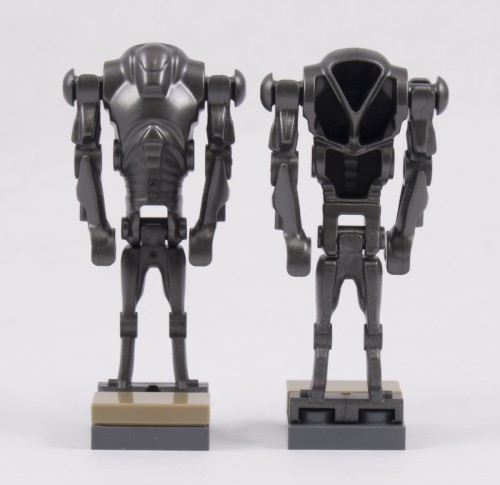 The stands are actually a crucial part of the set, and there are stands set up for each droid (one is used on the STAP instead of the droid). Otherwise, these are standard Super Battle Droids. The reason for the stands? To shoot with the new flick-fire gun! You’ll see how the plant section is put together later in the review, but this whole set is basically a big battle playset! 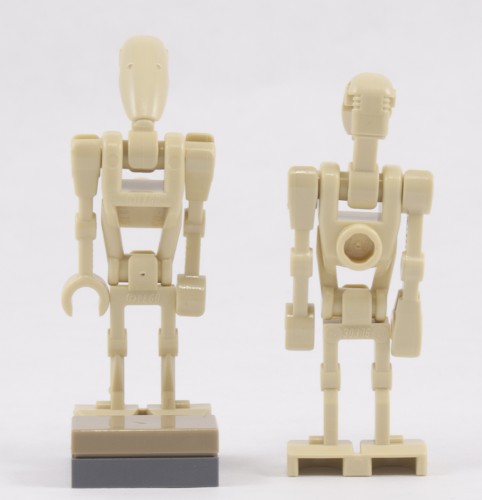 We get two regular battle droids as well, one with a sideways hand for holding a blaster and one for fling around on the STAP. 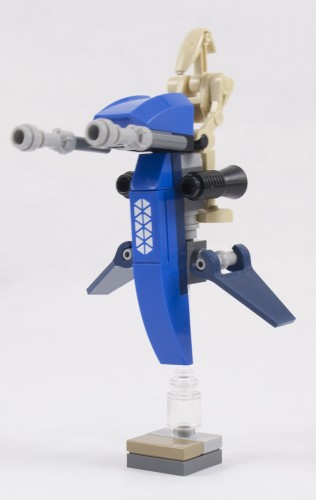 The STAP really hasn’t changed all that much from the previous versions we’ve gotten lately, most recently in a Mace Windu’s Jedi Starfighter (which came with two). 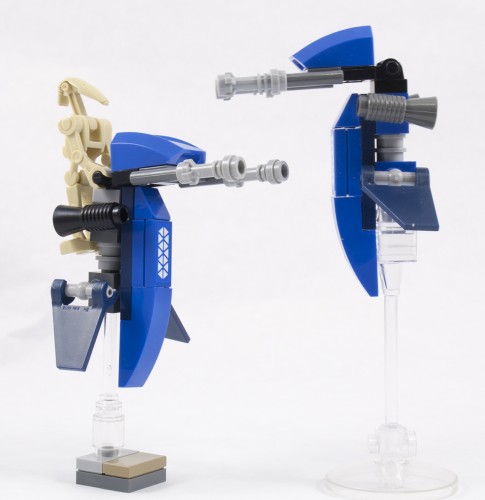 This is actually a near copy of that version, with just a difference on the base and the colors of the bricks with side studs that hold the wings and bullhorns. Otherwise, the same, down to the stickers. That’s not a bad thing, really, but it still has the issue of only really working when attached to the base. In this set, though, that’s kind of the point.

Our clone gets to ride a BARC speeder with the new flick-fire built right into the front. This is one of the more ingeneous uses of the new brick, since it builds it right into the speeder itself. The color looks a little weird next to all the white, but it’s nice that it doesn’t really add a lot of bulk to the ship overall. 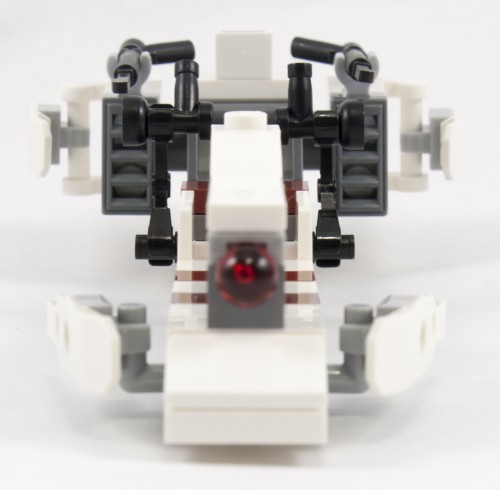 The build isn’t all that much different from the last BARC we got in a battle pack, though it is quite a bit more lightweight than the BARC in the BARC speeder set that came out last year. That’s not all that surprising, given that it’s lacking a sidecar. I am kind of curious to see if someone takes on the challenge of MOC’ing up that version with this new flick-fire mechanism. It’d look great on that version of the bike, and it’s sized to hide the launcher a bit more. 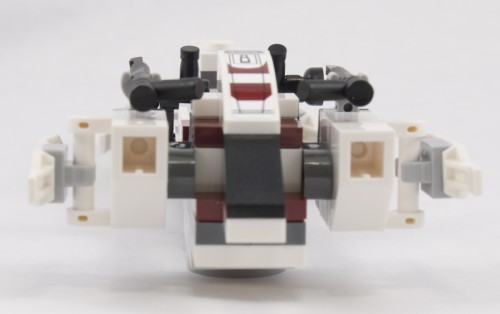 It’s actually a fairly simple build outside the launcher, and the back is sort of tacked-on. There are no stickers for accents or colors, only the “droid killing” marks that I made fun of Rex for. Given what I’ve seen of the Clone Wars (I’ve made it through season 1!), killing 5 clankers is like four seconds in any given battle, so this must be a rookie pilot. 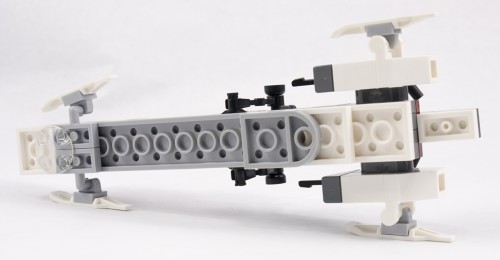 The underside is pretty much thus there, and not much to it.

Initially, you’d look at this plant section and just see it as a throw-in part of the set, but turns out, this is basically the point of the whole thing. We get some nice 2×1 curved slopes in olive green, and some new green vine plants that I want a whole lot more of. The rest of the plants and slopes are basic and simple, and the kind of things you can always use more of. 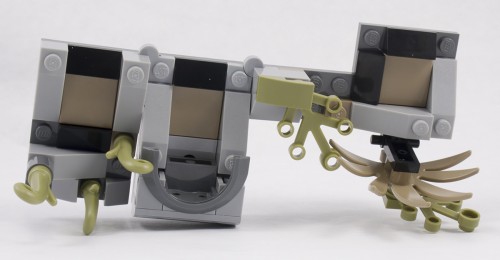 When you look down on the stand, though, you see the tiles and slopes are set up for those droid stands above. In other words, aim that BARC speeder, let the missile fly, and try to knock down the droids. As a playset feature, I just absolutely love it! This is one of the best little features that’s been included in a set in a very long time, and the kind of thing that should get worked into more sets (and every battle pack going forward).

What I love about this is that it gives a whole lot of choices for creativity past just building, and lets kids create a game with it. It reminds me of one of my favorite games as a kid, which involved plastic army men and marbles (do kids have marbles anymore)? Basically, we set up battle lines on either side, and you got to shoot with the marble (sometimes it was a super ball), and try to knock down the other guys troops. Me and my friends wasted a whole mess of our childhood playing that (and clogged a couple of drains with said marbles or balls, since we were playing in the basement… it was the largest flat surface).

There’s a lot of promise for setting up battle droids like this, and I wish more of the sets this cycle would have released something like that. Hopefully kids have enough parts to make them, or we see them hit pick-a-brick, because this is just too good of an idea to let go. The Lego Games might be dead, but they introduced something that could be even better and just requires buying a bunch of sets (seems kind of win-win for LEGO there).

In the end, this set ended up being a genuine surprise. It’s hard to call value on it being mostly droids, but really, at just $3 more than the battle packs, I’d lump it into that same value. It gives genuine army-builder ability and encourages some re-purchases with the base, shooter, and the ideas behind it. More than that, after some really terrible playset features lately (looking at you, Sail Barge), we got something genuinely unique and fun.

Verdict: 4 of 5. This set was a genuine surprise, and the playset value can give a lot of encouragement to repurchase it, especially if it hits a sale. You can purchase 75037 Battle on Saleucami on Amazon.com right now. This, and all the new Star Wars sets, are scheduled for release on March 1st. 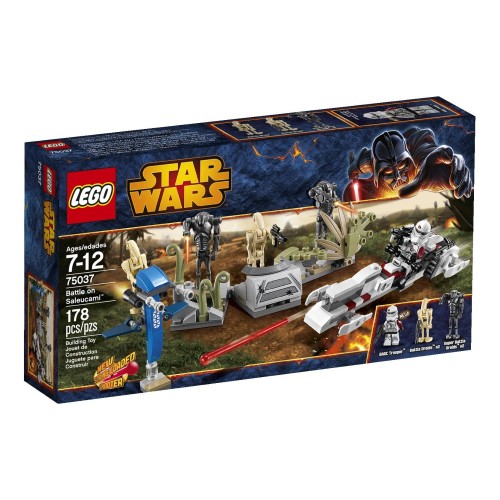