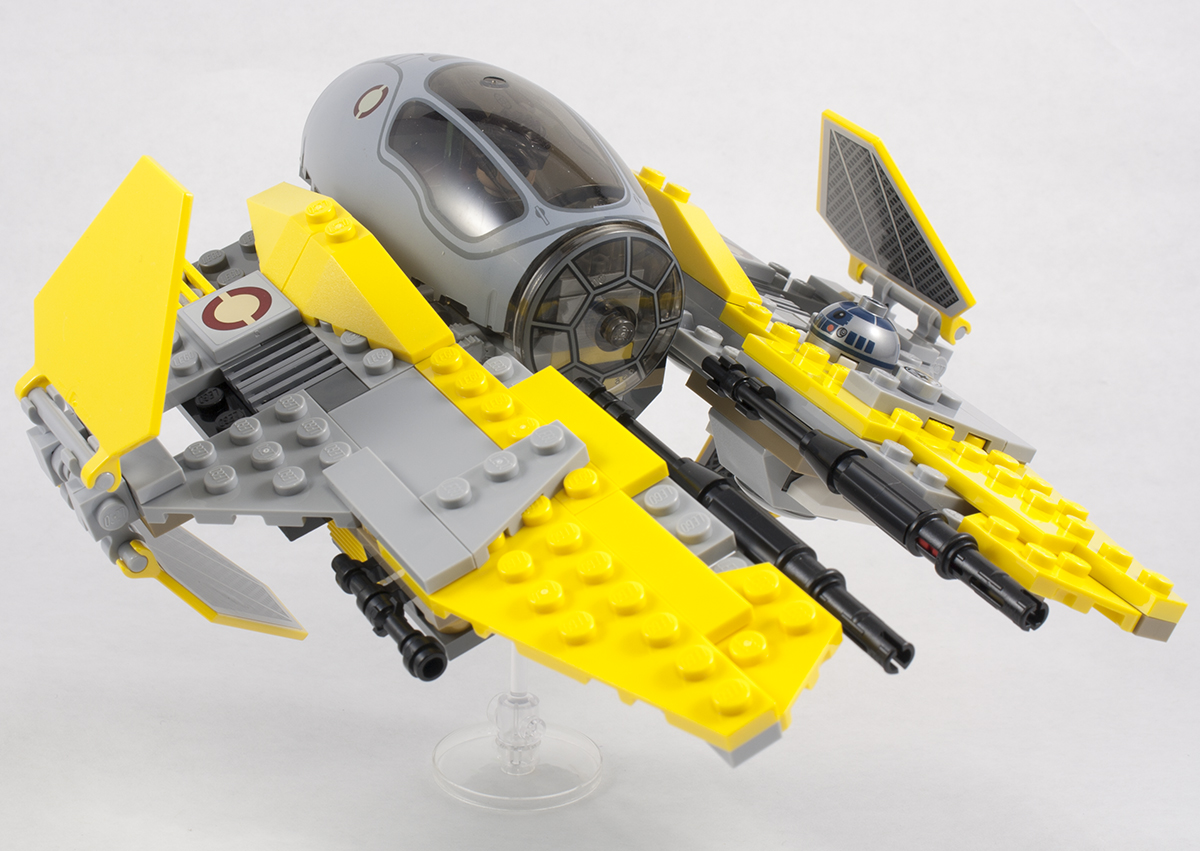 Quick, what’s yellow, flies, and is a totally unneeded re-release? Okay, I’m sure there are more than a few smart… um, alecks… that probably yelled “Naboo Starfighter!” at their monitor (and at least one who had to be different and said something about a lemon catapult), but for the rest of us, it’s Anakin’s Jedi Starfighter, I mean, Interceptor. I suppose that’s technically correct (the best kind of correct), as these ships are based on the Eta-2 Interceptor, but it makes finding them difficult when searching because all of them except this one and the green one before it are called Jedi Starfighters.

ThatÂ green oneÂ is really the big problem with this particular release, though, as you can still find them on a few shelves and it was just retired a couple of months ago. It was a Target Exclusive, which made it a little harder to find, but wasn’t exactly a knockout set by itself. To be fair, this version is nine years past when the original was made, and the Eta-2 fighters haven’t been the weeds that the Delta varieties have been, but still, it feels like they could do something else (like that Obi-Wan’s version, or maybe make the Hyperspace ring again).

At $25 and 223 parts, this is basically the new “budget” level set. It’s also a crowded price-point in the early releases, with Grievous’ Wheel Bike, the V-Wing Starfighter, and the Droid Fighter all in the lineup and running the same amount. I guess $25 is the new $20. The original included a Droid Fighter and Anakin’s fighter in just 202 parts, so obviously there have been some updates done. So the real question is how does this live up as a re-release of that set?

I’ll be honest, I had some negative expectations of this set going in, mostly because it just gets tiring to keep seeing the same rehash again and again and again. While the last version of the Delta-7 was my favorite and an overall a great build, we’ve pretty much had continuous versions of a Jedi Starfighter (either the Delta-7 or Eta2) since Episode II sets dropped years ago. I understand that Lego has a re-release schedule to go with turnover as kids age in and out of their target market… but a new version every year seems very quick to me. 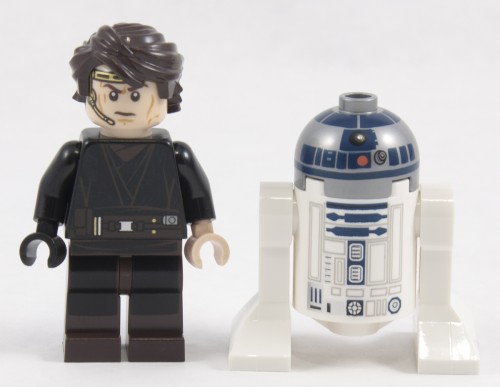 For minifigs, we the two that belong in the set from the opening battle of Episode III: Anakin Skywalker and R2-D2. Both are new figures, or at least a mix of some new parts. 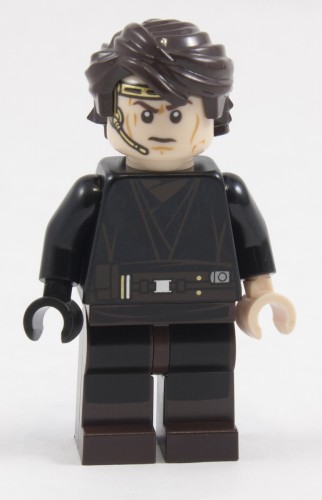 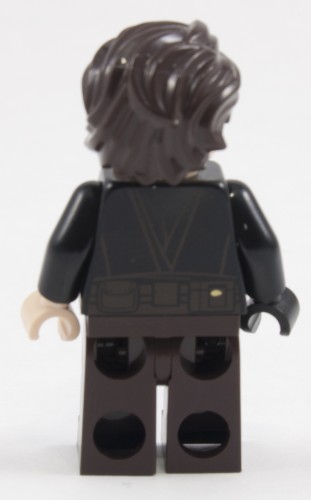 Anakin is basically the same as the version that came with the green Interceptor, just with a different head. I still like the printing he gets on this, and the face looks a bit better… assuming you can ignore all of the gratuitous lines around the face. I’m not sure which ones are cheeks, which are scars, which are frowns, and which are smears from his lunch. 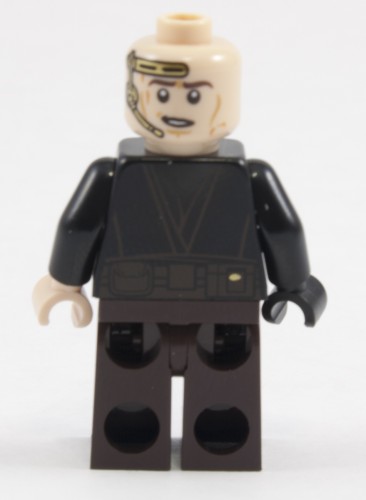 We do get an alt face with a little bit of a smile, as well as the headset. That’s probably the worst feature, since it reintroduces the same problem that we had with Anakin in the original Episode III sets. The only version without a headset was in the terrible Ultimate Lightsaber Battle set. Now, we get the Sith face in his other Jedi Interceptor, or a regular Episode III face / Sith Face that’s in that terrible Palpetine’s Arrest set. Some serious déjÃ  vu going on. 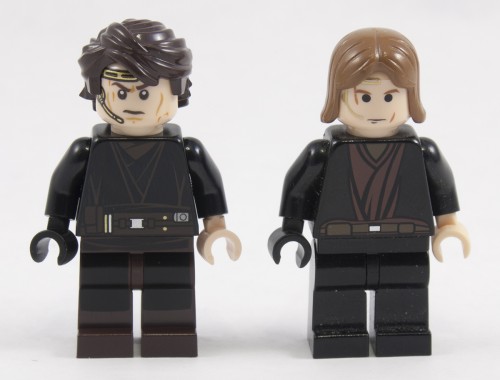 The upgrade is pretty obvious over a nine-year-old Episode III figure, which isn’t all that surprising. Figures have undergone a couple of stylistic transformations since then. I like the belt printing on the new one and the tunic printing on the old one (and printed legs always beat plain ones), so I suppose the new one wins out. 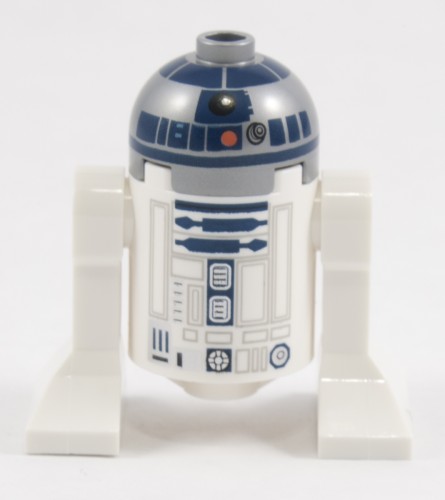 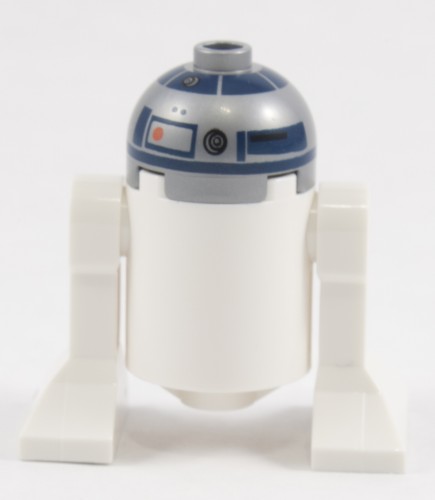 The real surprise of this set has got to be a brand-new R2-D2 figure. This one managed to sneak in past pretty much everyone, including Don, who saw the set displayed at Toy Fair (well, saw it in Ace’s pictures). If you can sneak a new R2 minifig past Don, you’ve accomplished something. 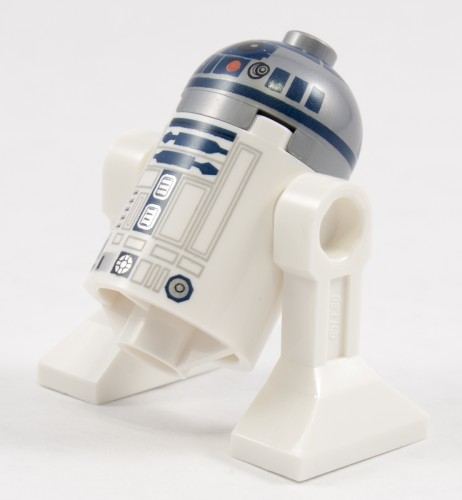 The printing certainly looks sharper, and the shiny silver looks better than the white and grey of previous versions. The one big knock is that they still haven’t fixed the general problem that the dome printing is still too high up. To paraphrase Don when I pointed out the new figure… “move the band down to the edge and then all of the printing down for the rest of it.

This is the fourth revision we’ve had of R2, for the most part, and the first real change to the torso in… ever. The torso printing on the new one is just fantastic by comparison, and brings out a lot more of the detail from a distance. I look forward to seeing this version show up in future sets. Of course, none of those future sets are slated for later this year, so if you want the new R2, this is the set you need to grab. 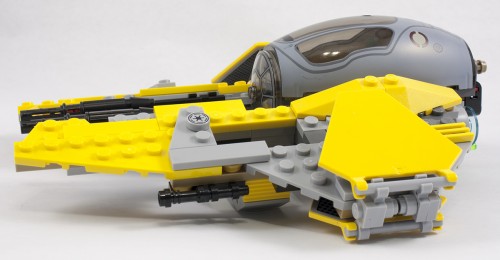 Okay, yes, I cheated on the picture at the top and used a clear bar/gun to hold it up. It just looks cooler that way. This, however, is how it looks if you don’t do something to raise it up. A lot of the PT ship designs look great in flying mode and somewhat lame when you fold it up to land (the new V-Wing has a similar issue). 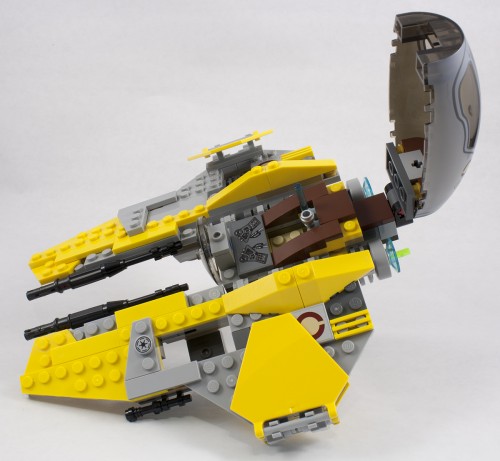 The interior has actually gotten a bit of an upgrade, trading out the control-stick of previous versions for a stickered 2×4 tile with controls. I’m not sure how I really feel about this. As a sticker, it has some use, but it feels sort of lazy as a solution to how boring the interiors of these starfighters usually are. This version also features the same astromech slot that Anakin’s green interceptor included, which I expect would be a regular feature in these ships going forward. 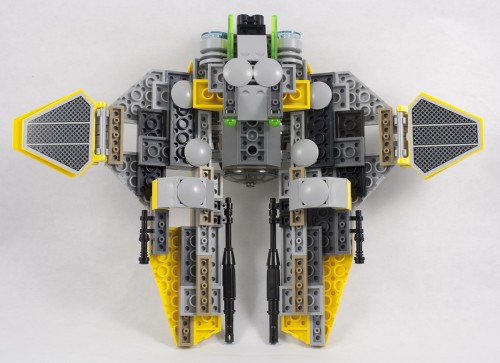 The underside of the wings is where the majority of the parts upgrade really comes in. We get the new flick-fire missiles, which integrate in pretty nicely. I know I’ve been hard on flick-fires in the past, but I like these as a solution, since it takes away the need to build the elaborate firing mechanisms that so many sets have wasted parts on. Now we just get two 1×4 flick-fire bricks and parts can go into more important things.

The difference between this and the original doesn’t really come across in the pictures. There are obviously more parts in the new one, and the wing is a couple of studs wider, but the real difference is that the old one is just a fragile sloppy mess. Sure, there are a lot more parts to choose from, but the old one was an exceptionally bad build in a whole sub-theme of bad builds. For those who didn’t get the original run of Episode III sets, they were probably some of the worst overall releases there were. The original Clone Turbo Tank was nice, but there were some real stinkers in there, like the Wookiee sets, Ultimate Starfighter Battle and Ultimate Lightsaber Battle.

The difference between the green version and this one is far more subtle. There are a few part differences, but the overall bulk and feel is pretty close together. Unless you’re a completionist or really want the yellow version, if you own the previous Jedi Interceptor there’s not that much reason to jump to this one (other than R2).

There are actually five Eta-2 Jedi Starfighters at this point… that accursed red Obi-Wan’s Jedi Starfighter is one of my set regrets. Luckily, the upcoming release of the Jedi Scout Fighter finally give me a way to pick up the wings/flags in the right color without spending a fortune. I’m thinking I’ll just MOC up one of the newer designs instead of trying to redo the old one at this point. I also never realized that the cockpit glass had changed from dark to light gray at some point, but hey, it did.

In the end, this set isn’t nearly as bad as it probably could have been. In one sense, it’s a very good upgrade to the original Anakin’s Jedi Starfighter. But in another, it’s a set that’s very similar to one that just retired, and there are a lot more sets in the price range just begging for your money. A bit cheaper, and this set is a good by, but hard to justify at full price. That being said, if you missed the earlier Jedi Interceptors, you have your chance… again.

Verdict: 3 of 5. It’s not a terrible set, and to be fair, is massively better than the original, and a new R2-D2 adds a bit. On sale (say in the $20 range) this is a fine set… I just really wish they’d make an Obi-Wan’s Starfighter version in dark red.

You can order 75038 Jedi Interceptor onÂ Amazon.comÂ right now. This set and the rest of the early-2014 lineup release on March 1st. 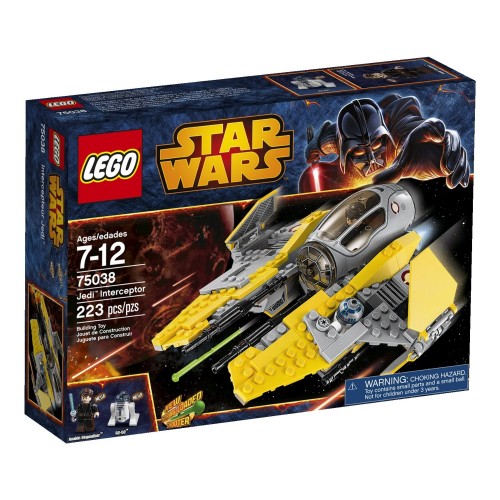