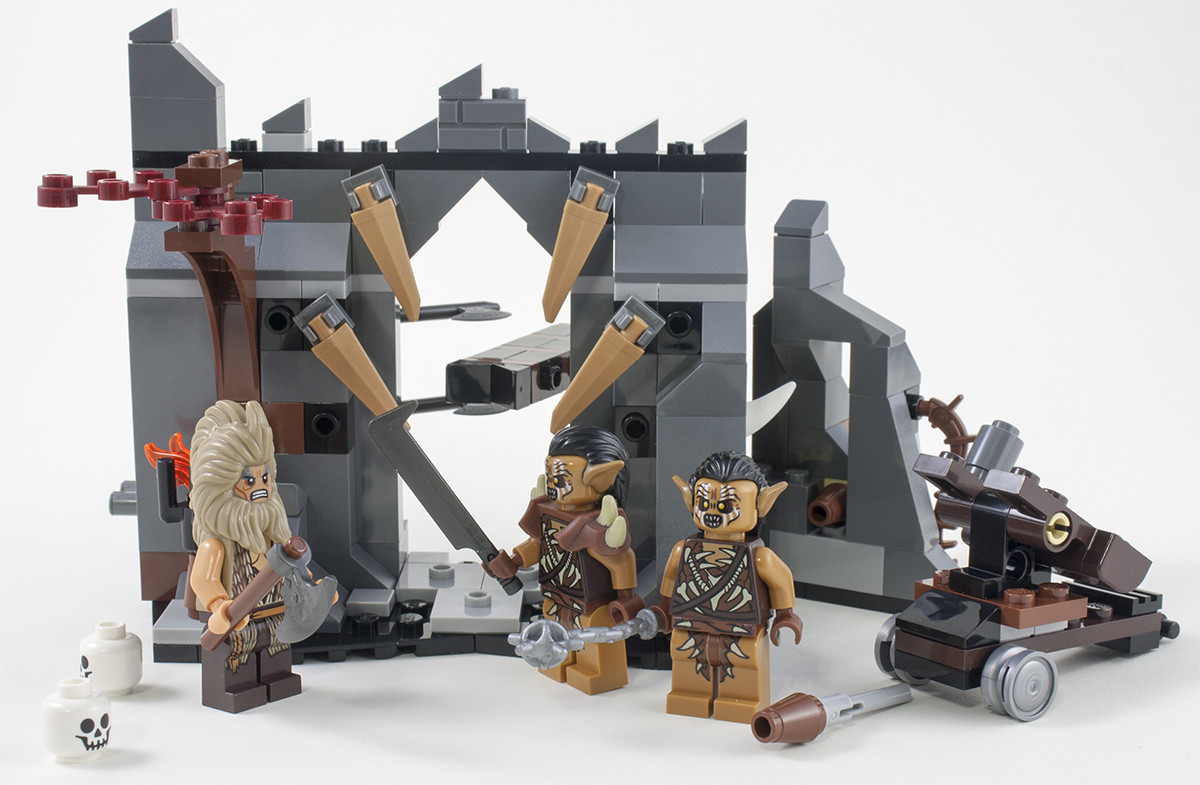 I really liked the first Hobbit set I put together, 79012 Mirkwood Elf Army. The movie it was (very loosely) based on… not so much. With the Mirkwood Elves, I at least knew a bit about what was there, and they were entities I remembered from the book. I won’t really say characters, because none of the elves, other thanÂ Thranduil, even had names as far as I can remember.

Dol Guldur, on the other hand, wasn’t something I remembered. Which meant I had to go to the great source of infallible information… Wikipedia, and it’s cousin that we don’t let near any matches, Wikia. Turns out it was mentioned in the original movies, as well as the books those were based on, during the Council of Elrond. In the book, it was just called the “Dungeons of the Necromancer” and never visited. Especially by Beorn, the skin-changer guy who played a crucial role in helping the dwarves and then at the Battle of Five Armies (and no point really in between).

This is the smallest set in the second wave of Hobbit sets, coming in at $20, and includes an Beorn as an exclusive figure, a couple unique parts, and of course, flick-fires. There might be some minor spoilers in here, so just a warning.

I’m starting to get the idea that these sets might be based on the movie in much the same way that the movies are based on the book. In short, we’ve got some names in commons, maybe some colors, and otherwise we’re in uncharted territory. It is kind of curious how we have sets based on a movie based on a book that doesn’t really follow either source though. Even in all the additions put in the movie, Beorn wasn’t at Dol Guldur. He was in Desolation for about three minutes, and that what he did was pour milk for the dwarves. Given that he could change shape, it’s probably best to not ask how he got it (though the fact that he had a cow in his house might be a more logical explanation than what I’m thinking). 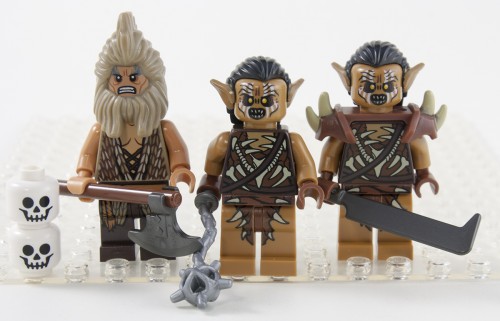 For minifigs, we get three, which would be okay if Mirkwood army, at just $10 more, didn’t offer us double that. Beorn is the unique one here, with the two goblins being “unique in this assembly,” i.e. they’re the same orcs but have some hairpieces. One has the same shoulder pads that I liked in Mirkwood army, so it’s nice to know we won’t be short on those things. 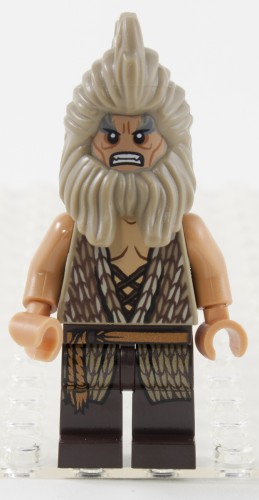 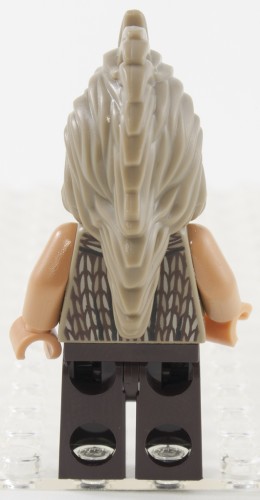 By now, most people interested knows the biggest failure of the Beorn figure: his head and beard are all one piece. This could have been a truly fantastic figure if those would have been separated out. Even if it was an over-elaborate hairpieces like what we got in PotC sets, it would have more utility. Instead, the hair sort of only works on this figure due to its unique coloring (actually, there are a couple of old Indy or Prince of Persia torsos you could swap in). I will say that Lego got the color printing between the face and the rest of the body, which is quite nice. 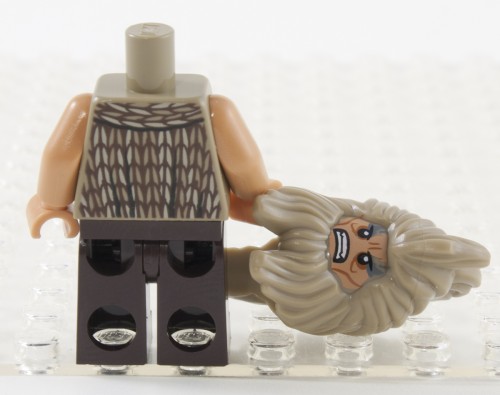 I suppose the figure is a decent enough match, but Beorn was a fairly pointless character in the movie. He didn’t go out and fight… he let the dwarves sleep under his roof, he poured them some milk, and then he loaned them some ponies. It’s a shame, because he’s a cool idea and a cool character. Maybe we’ll get some more Beorn-ing in the extended crazy cut, and he’d better be back in The Hobbit Part III: We can’t Believe you Fell for this Three Times when it’s released next year. 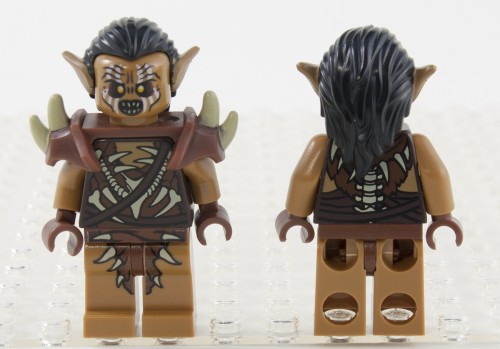 For the orcs, they’re orcs. They’re the same dark-flesh-ish color that the second-wave sets have been giving us. They have hair. And a couple of basic weapons. Beorn hates orcs more than dwarves. Not much else to say.

You know what Lego could have done to make this an awesome set, even with the loose connection to the movie? Give us a bear to “turn” Beorn in to. He’s a skinchanger, and in the movie, its implied that the bear is so fierce that even Azog and the orcs avoid him (and they were basically stopped by nothing else). So why would he go into this battle in the squishy human form? Seems like the bear would have been the way to go, and it would have given us something great and unique in the set. 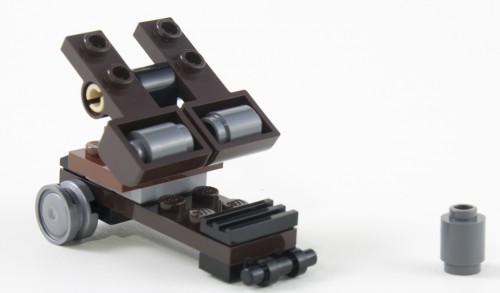 Dol Guldur in the movie is a big castle ruin that’s tucked into the corners of Mirkwood. because this little double catapult seems like it’d be kind of ineffective in the Dol Guldur I remember from the movie, and that’s not just because the person sneaking in was Gandalf (and not Beorn). This thing is really only notable for the inclusion of the small wheels in flat silver. I can always use more flat silver. 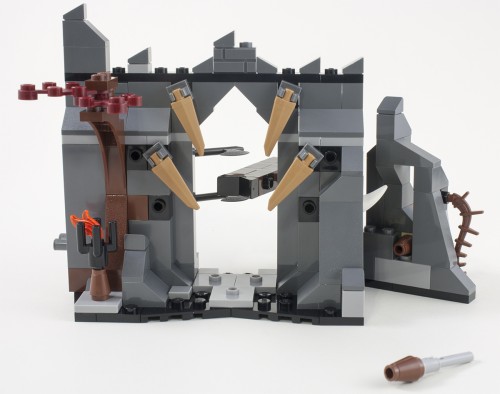 The “ambush” part of the set is a doorway that relies on a wildly impractical hammer and a few axes that you can swing open. There’s actually not a door there, just the opening. There is an “ambush” in Dol Guldur, but it involves Azog jumping out of magic and attacking Gandalf. Amazingly, Gandalf actually does some wizard stuff for once, instead of the least-reliable wingman that’s ever instigated a cross-country trip from every other moment in the movies. 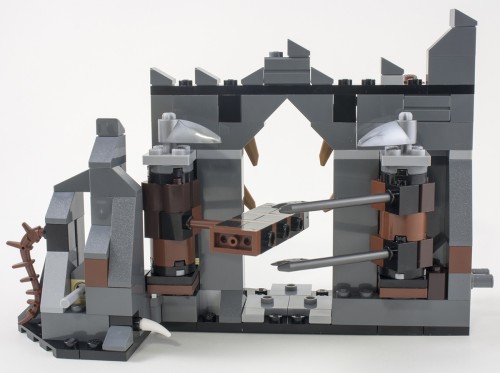 Truth-be-told, this is a wholly underwhelming build and set, and it seemed like a total “bleh” until I happened across a couple of new parts. 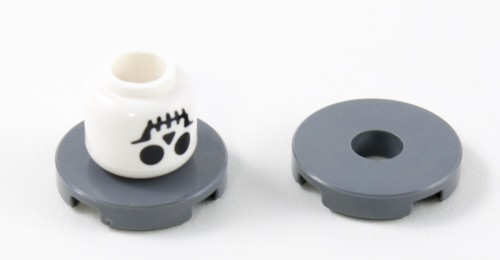 Well played, Lego, well played. You just got me interested in a set with low utility and value by creating a brand new tile that has an absurd number of potential uses to a space and castle builder like myself. These have the potential to be the easiest way to flip stud direction, and I look forward to seeing their use. I haven’t gotten enough of the 2014 sets yet to know if this is common in them, but I know I want a lot of them, in a variety of colors. 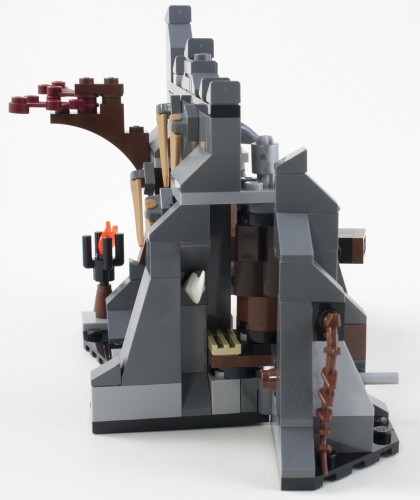 Oh, and that flick-fire sitting in the first picture isn’t laying out because I got excited and just had to try and shoot myself in the eye with the thing… Lego has decided that the easiest way to improve on a terrible feature, like a castle wall having a missile, is to include more of them. I like to call that the “Tyler Perry” marketing plan. 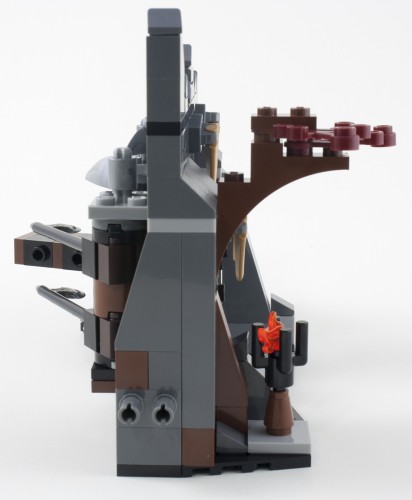 Like a lot of the other LotR and Hobbit sets, this one is designed to be attached to a larger set, presumably the Battle, which we can all just admit is really a glorified Radagast pack (and a “what the heck” necromancer figure). That review will be along early next year!

This is a wholly underwhelming set. There are some decent parts, especially those new tiles, some “brick” bricks, a few dark grey slopes… but the count is inflated by cheese slopes and the mechanisms for spinning the axes. Those little knife-blades come in a unique color (I think), but would have been much better in gold or silver than the dark flesh color there. I mean… are they made out of orc? How do you sharpen orc?

Ultimately, I got this set on sale, and I’m not sure it was worth it even at the discount. Perhaps it’s my opinion of the movie clouding it… but I built this set before I set out for the theaters. It’s nice to have Beorn, but the figure could be better and I’m willing to bet that he shows up in part three, at least for one of the endings that will be shown. Those tiles are awesome and I always like the brick-pattern bricks, but I’m not sure the price is worth it for the small quantities of either. That money could be better spent on any of the 3rd party resellers to get as many of them as possible (or better yet, when it comes to Bricks & Pieces). The set is best described as “meh.” It’s not outstanding, but certainly not special either.