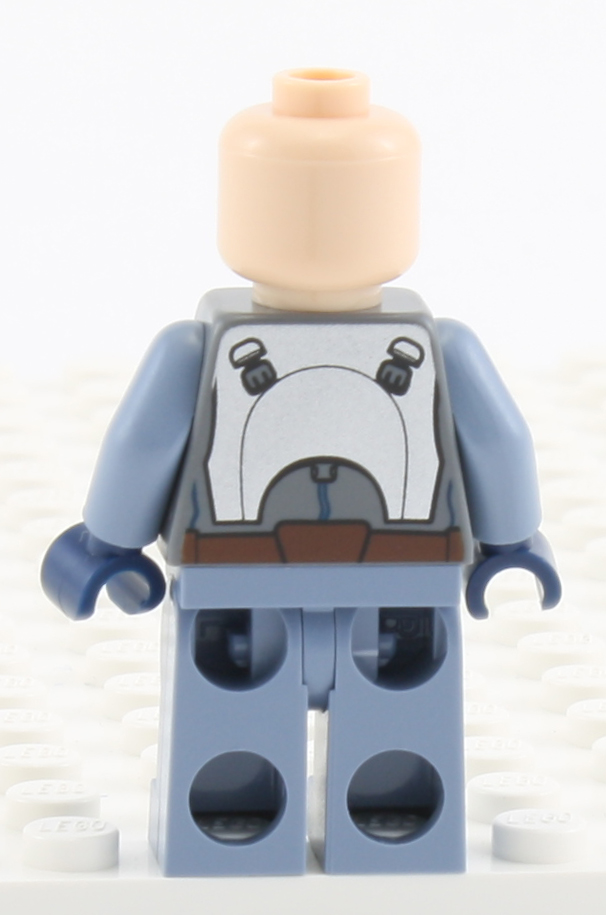 When I saw the leaks of the second-half sets for this year, it wasn’t the RGS that excited me (I didn’t like it at first, and I was totally wrong about that), or the Sail Barge (still think it’s awful), or even Jar-Jar’s Taco Truck. It was this simple little set, and for a very basic reason that I’ve decried in a lot of other reviews: because of a mini-figure. Jango Fett is one of those figures that I never managed to pick up.I disliked Episode II, and didn’t invest in many of the sets, being both freshly out of college when they came out (and as such, poor) and investing in other things like rent.

The sets I did buy, like Obi-Wan’s Jedi Starfighter or Bounty Hunter Chase were on the cheap side. I have gone back and filled in some of those gaps, like the AT-TE, but never wanted to pay the price to get Jango or his little, totally ineffectual, clone. Of course, I’ve been very hard to Boba Fett in my reviews, mostly because I think he’s just terrible at everything other than playing hide-n’-seek (R2-D2 has more confirmed kills than the most dangerous bounty hunter in the galaxy).

Jango, on the other hand, actually managed to kill a few Jedi, had an entire army created from his genetic code, and actually managed to live up to the “coolness” that was the Mandalorians.Â His only mistake was trying to take on Samuel L. Jackson… something that is never a good idea. The only thing that can kill SLJ is terrible writing (see Episode III).

At $20, this set is downright budget, and makes getting Jango easy (young Boba is in the Advent Calendar, so hopefully those old figures will drop in price). This is also one of the easiest sets to get a Clone Trooper in, something that’s missing in a lot of sets that need them. The droid tank itself is forgettable at first glance, though it did exist in Episode II (right up until it was blown up by a lot of Clone Gunships)… worst, it’s based on a design that was absolutely horrible when first introduced in the first Episode III wave and later revised in the first Clone Wars. It was fragile, flimsy, and kinda ugly looking. So for that part, there are reasons to be skeptical about building up your armies here…

Let me cut to the chase on that last complaint though: it’s not like the original. This thing is an absolute rock. We might be dealing with some RGS-level “first impressions are wrong” here. 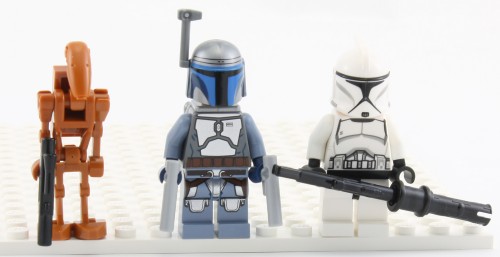 There are three minifigures in this set, and it’s easy to want to call this thing an over-sized battle pack initially. Sure, you’re going to get a lot of Jango, but the other two are a regular Clone Trooper and a Geonosis Battle Droid. Nothing flashy over over-complicated. The Clone Rifle has the technic pin we’ve seen a few other places, the droid has a blaster (because if you’re going to design a big fighting robot, you don’t want to just integrate the weapons in there directly… that’s silly), and Jango has a pair of fire nozzles.

The battle droid is the basic variety, the same as what we saw in the AT-TE. No printing, but it does have a back plate, so there is that. I actually like the dark orange battle droids, but hate knowing that I have to keep a lot more spare parts on hand in yet another color. 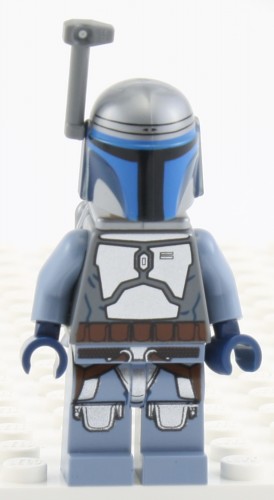 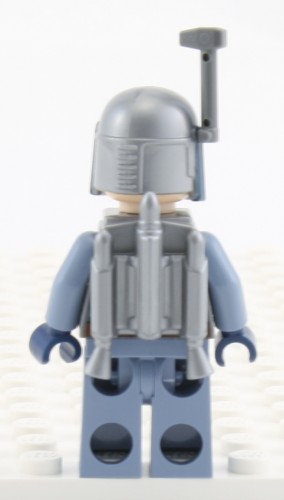 Â Jango is more-or-less a reskin of the new Boba Fett figure, and that’s not really a problem, given that Boba is basically an inferior re-skin of Jango. I like the sand blue over the green (nothing to do with my Boba hate, I just like blue more than green), and the helmet printing seems to work more here. The jetpack in pearl silver is a good bonus, and can easily be used in other applications. The most amazing part has got to be the legs… somehow LEGO managed to line up printing on the legs and belt… someone might want to check outside to see if its raining pigs. 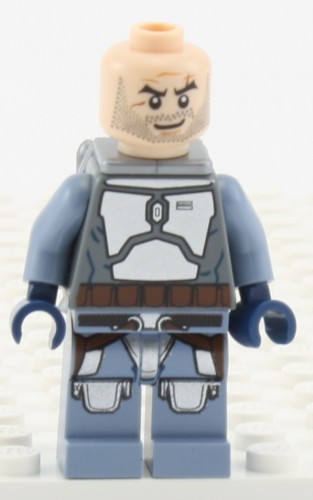 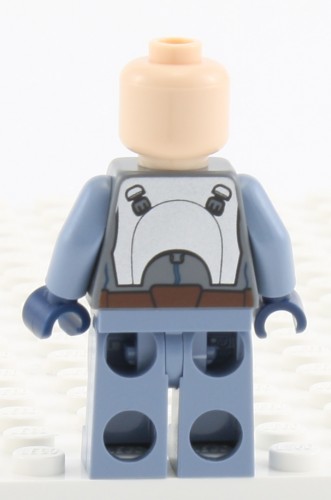 The printing works around on the back for his armor plates, and unlike a lot of other torsos that did this, it works here, given that the torso color matches on the background and top. The face is the same of Boba’s, which is right, though it seems strange they’d have the same scar pattern. I guess Boba is really serious about taking up his father’s look. No alt face, which I consider a bonus at this point. 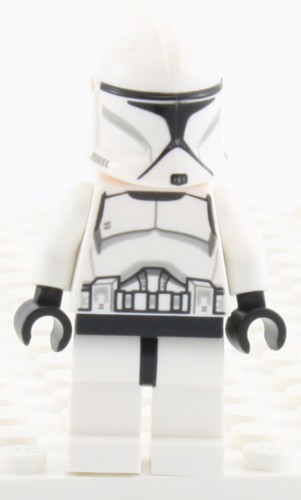 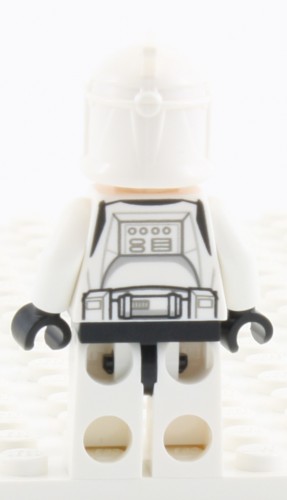 Our Clone Trooper is a regular, run-of-the-mill Clone Trooper. It’s the same as what we get in the CoruscantÂ Planet set, the Spider Droid Walker (review for that is coming soon), the Advent Calendar, and the Droideka battle pack. 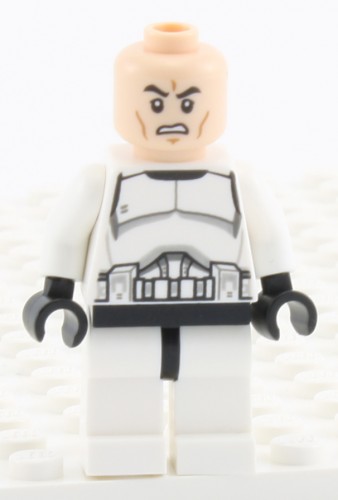 Vastly better than the Clone Wars one, better printing than the original Clones, and Phase I helmets. There’s a lot to like with these guys and that somewhat generic face you can work in to other figures. There are now three sets $20 or less where you can pick them up well (though that Planet’s set has never been in stock around here). 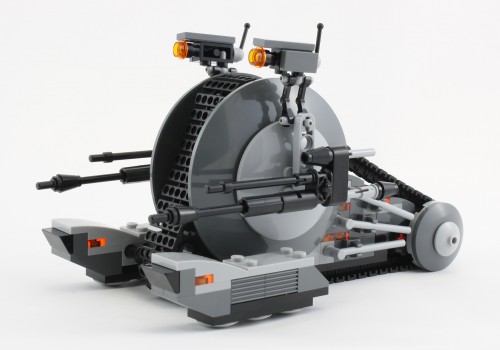 Would this qualify as a vehicle or just a very large minifigure, given that it’s a droid? The 2009 one (which i won’t compare here, because that thing was junk and got parted out long ago and I don’t want to find those parts) didn’t open like the 2005 variant that had those ugly trans-orange dishes, but it didn’t fit together well, which made it flimsy when you rolled it. The treads were also forward, making almost an even triangle (isosceles for you math nerds), and the dishes sat back to accommodate connecting the pylons with a long axle. 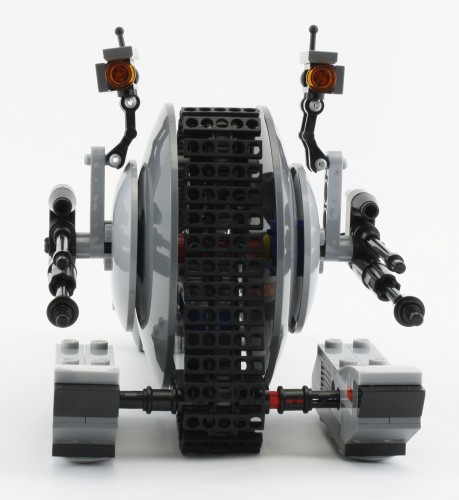 Here, the dish sets much farther forward, and the pylons are connected with a technic pin instead of an axle. This makes it quite a bit more sturdy, and there’s a lot more substance to the pylons. When you pick it up, this feels like a more solid build overall. It may be because it’s tighter when you thread it over the wheels, or maybe I’m remembering it wrong. But overall, it just feels like a better ship when you have it together. 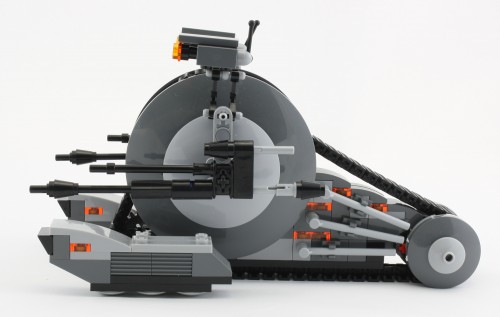 One of the coolest little features in the build is when you’re building the back part of the slope. Outside of including those delicious new mini-rounded slopes, when you’re building it, you’re lining up a bunch of pegs and side-stud bricks. At first, it doesn’t make sense… but when you add those bars and they all just fit into place, this goes from a “ho-hum” to “really cool” build. It’s not a big thing or feature, but it’s just a nice little feature that really makes the thing work. 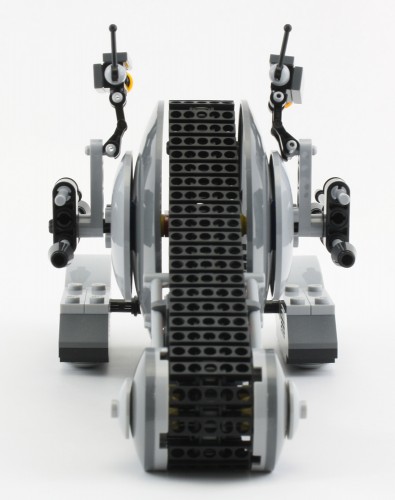 Likewise with the guns on the side and fitting the “eyes” for the droid, they just all fit together well. My only quibble is with the technic parts that holds the eyes up is that the connection feels backwards. I promise, I have it on right here, but if you flipped them 180, you can bring it up to the dish and hold it in place. I ended up doing that on this after I took these pictures, because it just feels right.

Ultimately, for $20, this set almost feels like a steal compared to some of the others. The piece count, 271, is certainly inflated by all of the technic parts that make up the innards and the treads that make up the… treads. But there are enough other parts to make it nice on that part alone. The huge variety of dishes, the slopes and grill bricks (including the little rounded slopes), and plenty of trans-dark-orange.

The minifigs are likewise very nice to have, and Jango is generic enough that you could almost just add him to the Mando armies we’ve been building as of late (the old Battle Pack and the Mando Speeder). A basic clone and droid also make this set a lot more attractive to buy multiples of, and that’s not a bad thing. Given that the battle pack only includes two figures (and two Droidekas), there is a case to be made that this might be the better way to build up your minifig armies. You certainly get more usable parts and don’t get a glut of green-stripe Clones.

You can pick up the Corporate Alliance Tank Droid right now from Amazon.com