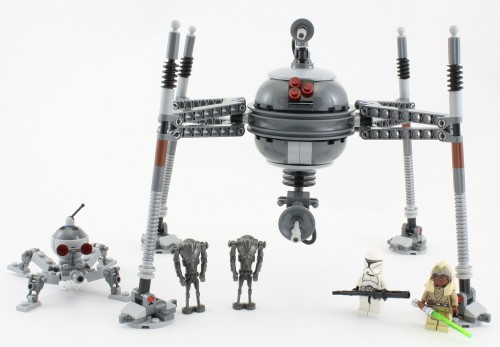 My love of walkers does have its limits, and the Spider Droid is one of those things I just never really understood. I mean, this is a universe where things can hover, jet into space, and use magic. I get why Republic and Empire used walkers, it was a mixture of intimidation and needing to move people from point-A to point-B.Â Droids don’t have that problem… this guy is basically an elevated target that has limited movement and a firing arc. Like the rest of the Episode II sets we got in this wave (well, except the Geonosis Duel), this set is a revised Clone Wars set. The AT-TE and RGS had a very high bar to live up to (and went 50/50 on that front), the Tank Droid was for a forgettable set, and the Spider Droid has one of the lowest bars imaginable. The original spider droid was fragile, ugly, and overpriced (compounded by being a TRU exclusive if I remember right).

This version keeps the same price ($30), loses the exclusive tag, actually increases the piece count, and adds a new Jedi to the ever expanding palette of victims of poor decision making. That’s not saying it’s all roses in the improvement category, but at least things look a bit more promising on the “I don’t feel like I’m being robbed” front.

We get four minifigs in this set, if you discount the little droid: a couple of Super Battle Droids, Stass Allie (which sounds like the punchline to “what sound does a Jedi make when he goes over a cliff… Alliiiiiiiiiiiiiieeeeeeeeeeee – Jango Fett”), and a generic Clone trooper. That’s not a bad little mix. 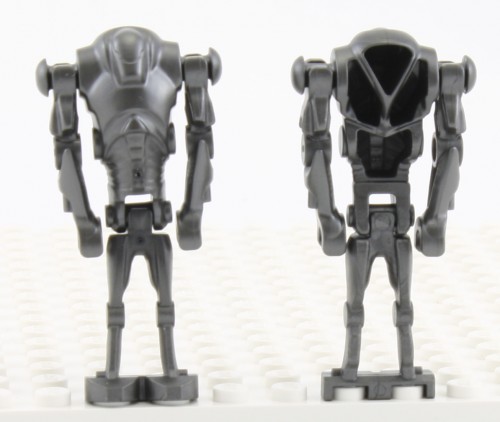 Super Battle Droids are a bit harder to get than regular battle droids (only currently available in the RGS or clearance 2012 Advent Calendars). These guys haven’t really changed all that much since they were first introduced in the inaugural battle packs. The only variation has been adding a blaster arm (you know, something that would actually make sense in a war machine). I like the general idea of the SBDs, but I still don’t like that hollow back. It seems like something that’s overdue to be fixed. 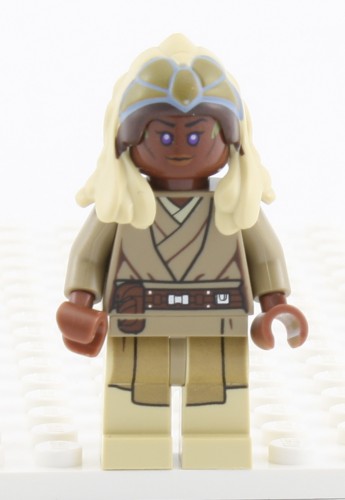 I’m pretty sure that we’ve gotten about eight hundred new Jedis this year in minifigure form (it may also be like ten, I’m fuzzy on numbers), and Â this is just another one to add to the mix for our Episode II fun. I know nothing about this character, though it somehow hits into odd territory for LEGO, in that we have a female minifig, strange on its own. But one that appears to not be lily-white is also very cool. 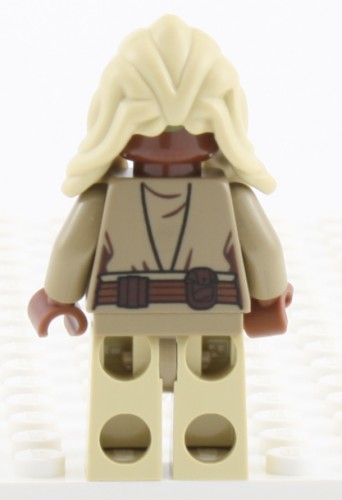 I’m thinking that head could be turned into a pretty serviceable Storm minifig for us comic fans, even if the eyes are purple instead of white. The hair is odd, there is no alt face, and the printing on the tunic matches. She’s a minor character, but I’m glad to have her to help diversify the Jedi palette. 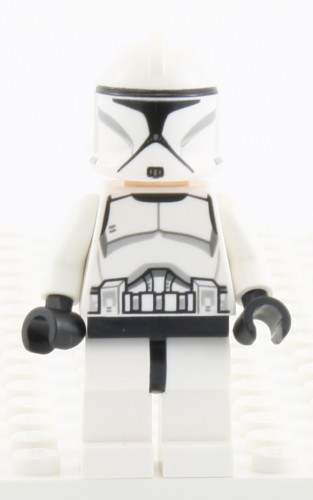 Our Clone buddy is a regular old clone, and that’s a good thing. A lot of sets need more of him, and I always need more clones. Turns out, there were a lot of them. 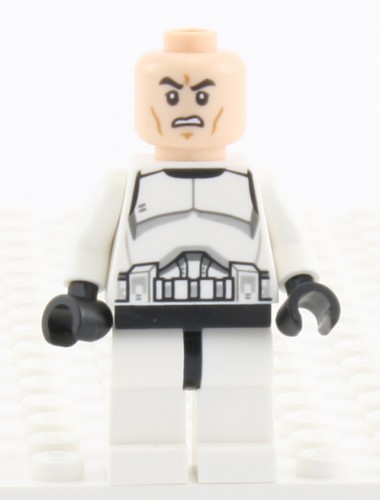 Regular generic face, no alt-face, and can be used almost anywhere. There’s a lot to like with the newer clone variety. The only thing to be unhappy with is that you can’t get more than one in any set. 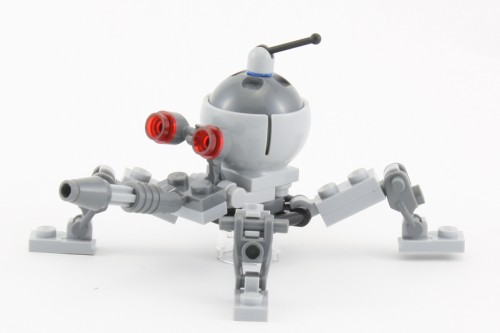 There are actually two Spider Droids in this set, the big guy and the annoying little thing that’s been a toss-in with a few different sets. I think this is the third version, but I’m way too lazy to go look it up (I seem to remember getting him once in blue and once in brown). I like little brick-built droids, typically, and there’s he’s simple but kind of nifty. I always like to see those little turret ball socket parts (and don’t feel like parting out an AT-TE to a whole mess of them). 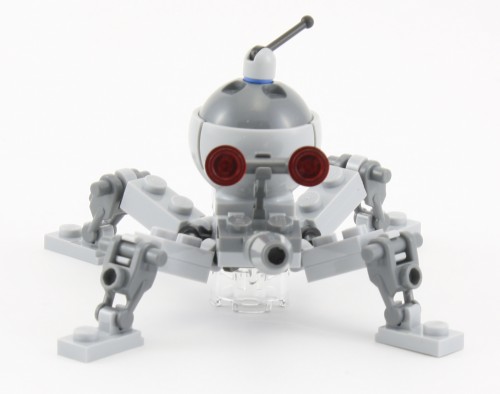 These guys make far more sense to me than Battle Droids and Super Battle Droids in general (as does the Spider and Tank Droid). I mean, if you’re going to build a robot army, what’s the logic in making them less efficient at doing their job by making them look human. A Battle Droid can’t do anything by itself… you have to give it a gun to actually be dangerous. I mean, look at it’s hands and arms, they’re not even articulated enough to be able to choke the enemy. Their best bet when sent out without a gun is to try to use overwhelming numbers so that when they’re shot down they’ll be able to crush an opponent or two to death.

This guy, on the other hand, is basically a walking little turret. Sure, maybe he’d be a bit more efficient with a repulsorlift or some wheels, but he doesn’t have to worry about visiting the armory before going out on the field. Even Skynet eventually knew that you wiped out humanity with giant robot space ships, not the fleshy little human analogs that they kept sending into battle. 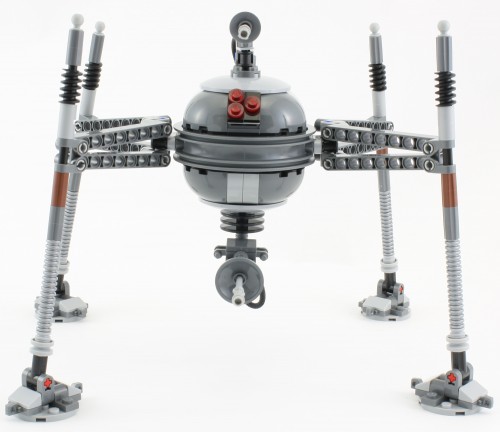 The centerpiece of the set is the “Homing Spider Droid” that its named after. Of course, those keeping count at home will notice that it’s about four legs short of being a spider (two if you’re feeling generous and let it count the guns). Sure, it’s probably just named for what it looks like, and maybe spiders in a galaxy far, far away only have four legs (thought it’s fairly unlikely they’d be called “spiders” unless the universe just isn’t very creative), but still…

The pictures really don’t convey the biggest problem with this set: it’s… awkward. It’s not flimsy or fragile, but it doesn’t sit all that well. It slides around on those feet badly, and the center ball tends to tip to one side or the other, causing one set of legs to bend in and the others to bend out. It probably took me two minutes to get this thing balanced just right when taking the picture, since just looking at it funny made it go off-center.

The biggest problem with the old one wasn’t the legs (though they were pretty bad as well), it was the center ball. The legs stuck into a technic brick on either side, and that made it somewhat wonky to pick up. The structure didn’t tend to hold up, and it was easy to accidentally “crush” the ball and send it flying apart. I don’t really rate a walker on how swooshable it is (what would be a good term, stompable?), but that hurt the set almost as bad as the price.

This design fixes that problem by using a large wheel as a center hub which connects the legs mechanism. Instead of a single pin, it’s now a double technic pin, and it makes the structure very sturdy, even if the legs themselves are wobbly. So, very stompable, not very disaplayable.

The center ball actually splits into three distinct parts that thread through that center ring. The inclusion of the rounded big corner slopes, introduced back with the Prince of Persia line (and a couple of years after the last Spider Droid came out) make a world of difference over the blocky slopes. While the whole droid on big legs thing is kind of silly, this build just looks great. It’s not even a contest for the look of this compared to the others, and this set marks a cheap way to stock up on those parts. Likewise, the little guns included on the top and bottom are quite improved, and I really like the general design of them. You could easily slap these parts as-is on to a capital or smuggler ship and they wouldn’t look out-of-place at all. 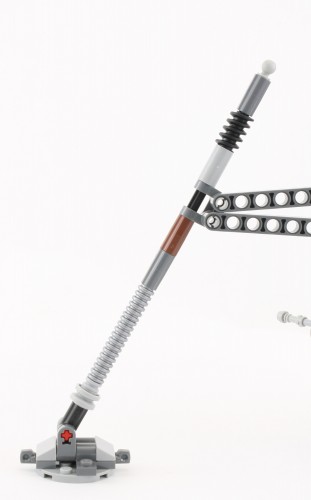 The last improvement in the set was adding some details to the leg. The old one was basically just a technic axle that looked awful when you put the thing together. Here, there are some tubes and a hub the hide that aspect and make it look like a leg instead of “we didn’t want to put enough parts in this set.” The real shame is that the leg doesn’t keeps steady. How you see it above is the natural state it likes to go in, like it’s ready to tip over.

It’s a weird set in the grand scheme of things. It’s obviously a big counterpoint to the big Episode II sets that favor the Republic (anyone want to bet we get an updated Hailfire droid next year), but it’s still kind of obscure. We get droids and a clone, along with a new jedi, so the minifigures are all nice to haves. The price isn’t bad at $30, and it actually is a far better deal than the old one, and it looks much better.

At the same time though, it’s probably the weakest of the Episode II sets (Duel on GeonosisÂ is just a bad set but has good parts). It’s a decent model, but if I compare it with things like the Corporate Alliance Tank Droid, it comes up short while being more expensive. It’s not as useful parted out as Duel, given that most of the parts are technic elements. I think the real difference for this set will be a good sale, maybe down into the $25 or less range. Or maybe just the need for more female jedi.

You can pick up the 75016 Spider Homing Droid on Amazon.com right now