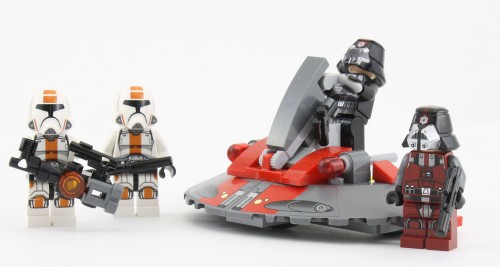 When I reviewed the Sith FuryÂ and the Republic Striker-Fighter, the basic worry I had was that Star Wars: The Old Republic (SWTOR) had a big jolt of freshness to add to the somewhat used up Star Wars palette. Don’t get me wrong, I love seeing updates of sets (at least when they’re done right, and not just an excuse to hide a cannon somewhere), but sometimes, it’s nice to see something unique. Sure, sometimes that’s a risk (like the TIE Crawler), and sometimes, it’s just awesome (like the Fury was).

Sadly, SWTOR was pretty much the duck that any of us who played it knew it was going to be. It could have been an amazing single-player (or even co-op) game, or it could have been a slick MMO, but they tried to make it both. It’s gone Free-2-Play, and managed to alienate just about everyone (okay, I don’t know that, but when I logged in, I was quite certain I’d have to pay a fee to try and log back out).

The ideas are all still there, though. The ships for the characters are all great, as are the general character ideas. And that led us to one of the Battle Packs released at the beginning of the year, Republic Troopers vs. Sith Troopers, tapped into some of that. For the first time in the history of ever, I think the throw-in speeder for a battle pack actually existed in the source material, so we’re in uncharted territory here. Then again, the Sith Troopers were also NPC-only characters, usually that you were just mowing down for fun (be it Jedi or Sith, lots of equal opportunity murder in the Sith Empire).

Obviously, the SWTOR based sets aren’t for everyone, but seem to be decent sellers (even though most people buying probably never played the game, given it’s terrible subscription numbers). At $13, this is one of the cheapest sets, but the real question out there is that $13 better spent on this battle pack, on getting more Clone Troopers (the other pack this year), or on Elite Troopers and Commando droids (last years pack). Sadly, if you waited on Endor Troopers, it’s sold out and discontinued, so you’re out of luck.

This is a very hard set to pin down for value. While I want to see SWTOR sets made, it’s not because I love SWTOR. I enjoyed the game, but it was easy to quit playing when my daughter was born and never pick back up. I only ever finished two character’s story quests, which was kind of a shame, but it’s not worth a monthly fee to pick back up and play the rest (and their F2P model makes doing it without the subscription far too annoying).

There are so many things in the game that are good both for the Star Wars visual universe and LEGO in general. I still want to see the Bounty Hunter ship get made, as well as some of the larger republic ships. Even seeing some of the other characters show up would be great. There’s a distinctive visual style to that universe (Old Republic in general), and there’s a trove of things to tap in to. The problem with seeing more, besides the failure of this particular game, is that the Old Republic games in general are still very niche. Yes, a couple of million people played this game (and a couple of million bought KoToR when it first came out), but those numbers are less than even the worst Clone Wars episode. That’s why we’ll get characters from Clone Wars (and the upcoming Rebels) before we see much more from this line.

We get four minifigs from the set, two Sith Troopers and two Republic troopers (not a surprise, given the name of the set). All are in some way unique to the set, though that guy on the left only has a different head. And yes, before you say anything, I do know I switched the helmets from what it looks like on the box art. That’s what I get for trying to line up that little stripe to the little stripe on the armor.

The republic trooper gets a brick-built vacuum cleaner too, though I may think that’s supposed to be a gun. I don’t even really cover it later, because it’s just such a mess, which is odd. They had a better gun with the Republic Striker Fighter, so it’s something they could have done right. 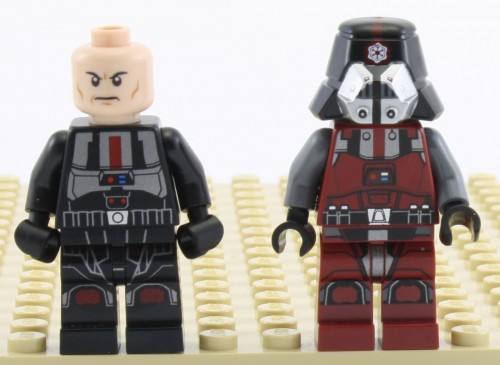 Our Sith Trooper buddies are both armored and have a couple of blasters. They sort of look like that in the game (there is actually a huge visual variety, and since the player can never be one, it’s something you see on the other end of a gun). Obviously, the look of both is inspired more from the Original Trilogy Empire than the Republic itself, with a distinct TIE-ish look to the armor with a smattering of Storm Trooper. 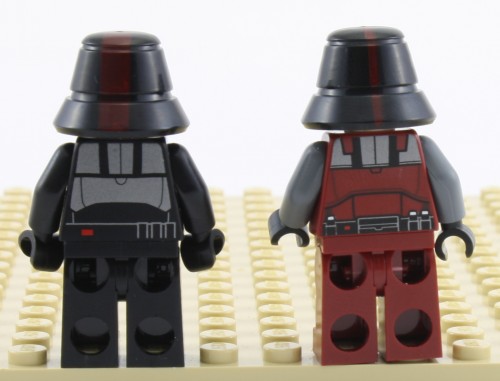 The red trooper fits the general red theme that Sith have going in TOR, but I don’t recall seeing a trooper specifically in that color (there were a lot of dark jedi wearing it though). It’s not just a recolor of the printing, there are differences in it, but it’s obviously inspired by the other figure. Nicest thing about the figures (other than having faces without alternate faces) is that you can easily drop them into most any setting and they’d still look right. Sure, that logo may look weird, but call them an elite commando force or something. That’s what they do for Battle Droids all the time. 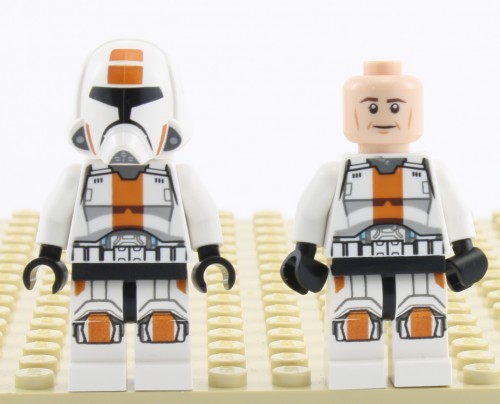 For the republic side, we get two troopers with identical armor, but different faces. I neglected to take a picture of the second face, which is the same as Colonel Hardy / Planets B-Wing Pilot / Cavalry Builder soldier… in short, generic fleshy face #2 or something like that. What I like about this armor, specifically, is that if you swap out the helmet, you’ve basically get “Generic Space Armor” type stuff. Given all of those orange and white helmets we’ve seen in the minifigs and with Galaxy Squad, I bet you can make some interesting figure mashups here.

The reason I say that the helmet probably needs to be swapped is very apparent when you look at the back of it. Was this armor designed by the Sontarans or something? Cause I’m pretty sure I know where to aim if I’m going up against these guys. I’m not sure how you fix this other than giving that head a black backing (like the scout and stormtroopers), or maybe something to go around the neck. That or maybe build a full helmet to put on their heads. 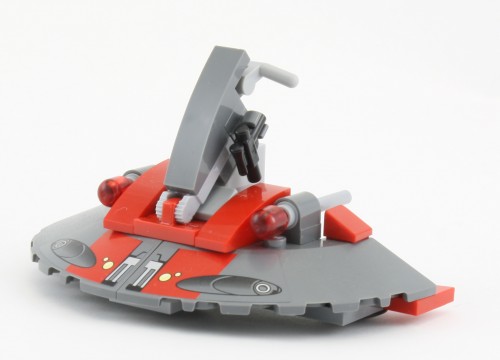 The “play” element of this, to make it somehow not an action figure pack, is a speeder. Like I said in the intro, these actually do exist in the game, sans the flick-fires (like almost all MMOs, it has vehicles that somehow become worthless when someone decides to throw a punch). So these are more like the things you drive around before you shoot at things, but sadly, cannot shoot from. 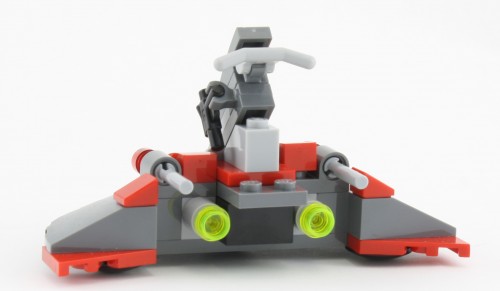 It’s fairly simple, a small platform and some gets. It’s got stickers for the details, which is fine for something like this, and if you break it down, there are some decent parts. There just aren’t all that many of them. Seriously, this thing feels like it’s got eleven parts in total. Lego says 63, but I assume that’s counting all of the minifig parts, the stickers, and perhaps even the box, instructions, and glue used to shut the box.

It’s a battle-pack, so there’s not much to expect outside of the figures. The Sith Figures are fantastic and the Republic Troopers are 80% fantastic. But unless you’re looking to fill out some unique troopers or really like The Old Republic (and their play numbers would lead me to believe no one is in that category), this set has limited value. At $13, it’s not as good as the other battle packs out there. But then again, Walmart.com currently has it (and the Clone Troopers vs. Droidekas) on Rollback for $10, and Amazon is matching it, which makes it a bit more attractive.

You can pick up the Republic Troopers vs. Sith Troopers at Amazon.com right now 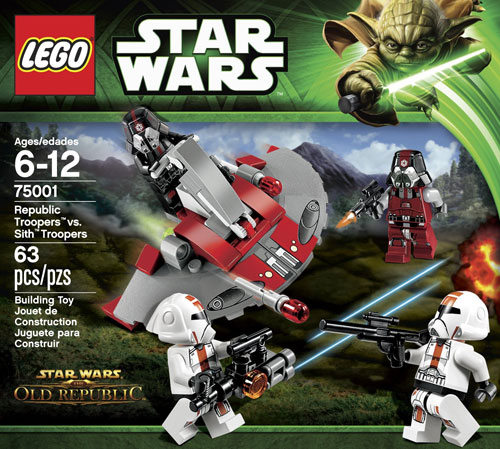