The Wizard Battle addresses one of the biggest gaps in the Lord of the Rings sets (Eowyn and Faramir are both still MIA) by giving us Saruman, as well as some hair for Gandalf. This is the iconic scene from the first film where we learn that the greatest of all wizards has basically turned to the dark side (this was before we knew that he was also responsible for setting up the Clone Wars). It also features theÂ PalantÃ­r, and gives us an excuse to have wizard battles while making little sound effects.

And to top it off, it’s only $13, the least-expensive set from the summer Lord of the Rings wave, and we have to ask, can it live up to the first impression we get after seeing all that Christopher Lee goodness?

The little sets have had a mixed history in the Lord of the Rings and Hobbit lines, and small sets in general are always the hardest to judge for value. It’s easy to decide if a $50 or $100 set has value… you’re dropping some serious money on something like that. But a $13 set is an afterthought to most adult collectors. I’m sure we’ve all blown more on a random action figure we didn’t even want, a game on Steam we never plan on playing, or on some food item because it has the word “Super Chocolate Bacon Adventure” on the side. 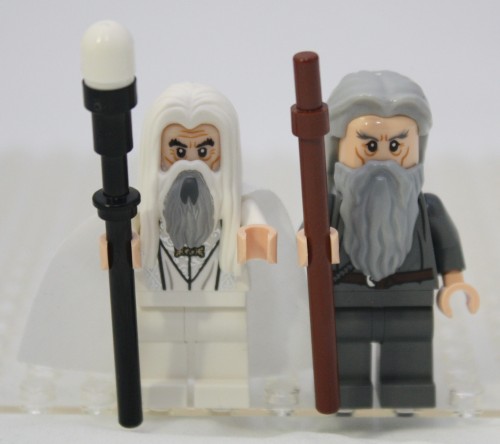 We get a pair of minifigs in this set, Saruman in his debut and Gandalf, who has been in several other sets, though this is aÂ unique version, featuring hair instead of a hat, no cloak, and a more stylized face. Both come with staffs, Gandalf his simple bar with a ring, and Saraman with a brick-built staff, featuring a black telescope, 4L bar, and a white light cover / eye.

The white eye is honestly the most exciting part, as this was a rare part only available in a Ninjago set and two huge sets (the UCS X-Wing and the Tower of Orthnac). While the part itself wasn’t particularly expensive on the aftermarket, it was hard to get in bulk. Now you can get it in bulk and… I’m not sure what to do with it at that point. Like most of my other parts, put them into a sorting bin and then stare at them thinking “I should really do more custom builds.” 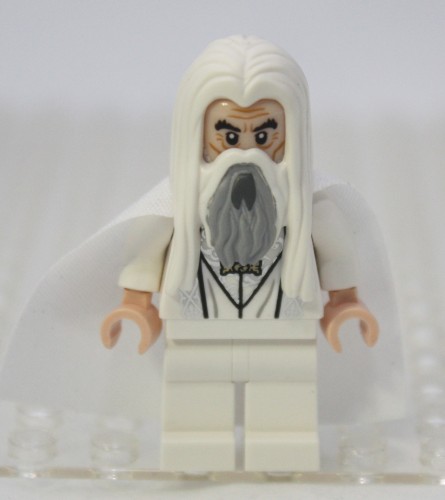 Saruman as minifigure is just perfect in the beard/hair. I’m not sure how I feel about the one-piece beard/hair combo for him. On one hand, it looks just perfect, and creates a good effect for the figure. On the other hand, it means that I can’t use the beard by itself on other figures. But that hair is just spot on. 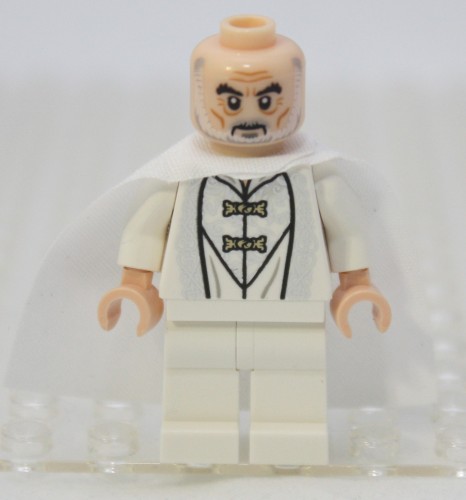 Can we just all go on the record and agree that the single best thing to come out of The Lord of the Rings trilogy was every moment where we had bothÂ Ian Mckellen and Christopher Lee on the screen together? Are there two actors that tie together more of the nerd universe than these two? The only one I can think of coming close is Patrick Stewart (who is also awesome… if he would have been in this scene my brain would have probably exploded from happiness). Okay, maybe Gary Oldman, but here we had Dracula, Dooku, and Magneto in the same scene. 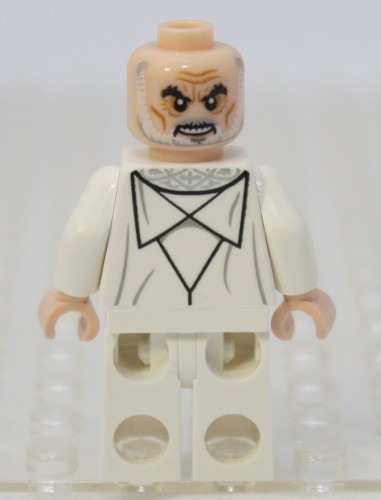 The torso is printed well, and looks vaguely robe-ish. Unfortunately, the plain white legs really ruins the look of that printing. There’s another version of Saruman in theÂ Tower of Orthanc set, which includes a slope instead of legs, and has printing down the entire length. I haven’t picked up that set yet, but the printing overall looks far more elaborate than this figure.

It would have been nice to at least see the line of the robes continue down on to the legs. That face, however, is all Christopher Lee (and also looks suspiciously like Sean Connery); the same face shows up on Dooku in the Geonosian Jedi Duel set that comes out August 1st, so we’re getting double the Christopher Lee this year (triple if you count the Tower set). 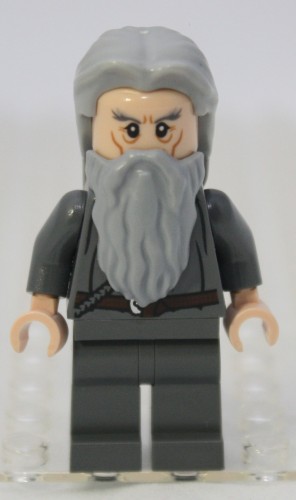 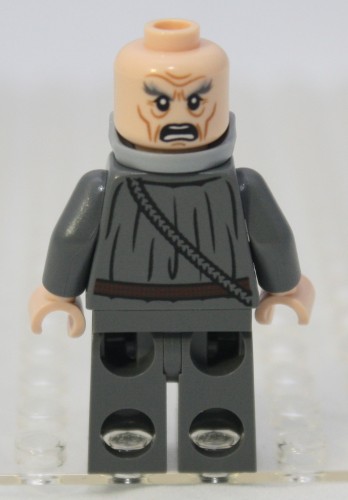 Gandalf’s torso, beard, and legs are unchanged in this version. The face is new, and includes an alt-face, thanks to having hair and no hat. A version with the cape comes in the tower set, and a “Gandalf the White” version uses the same face and shows up in the Black Gate set. Of course, seeing this face makes me want to go buy another copy of this set just to take the new face and put him on a Magneto figure, but that’s just how I am. 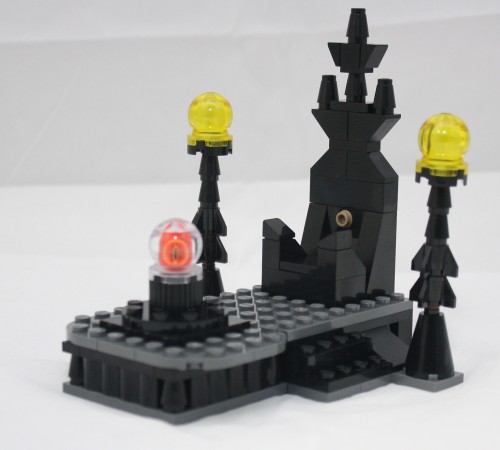 The set itself is basic, like most $13 sets are. Mostly, it’s a throne that includes perhaps the second-worst “don’t shoot out your eye” warning in a LEGO instruction book, a pedestal for the palantÃ­rÂ that includes some technic gears to rotate it, and a couple of lamps. Maybe it’s because my head is too big to get in there to poke myself in the eye with that, but I’m fairly sure my 11 month-old daughter couldn’t hit herself in the eye with it either. Though that may be because she’d put it in her mouth long before it got to her eyes… 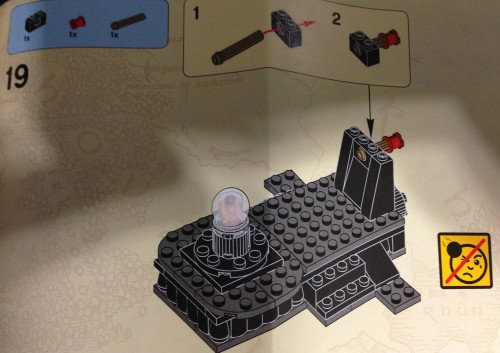 In case you’re curious, the worst flick-fire warning is in the Elrond’s Council set, which I’ll have reviewed in the next week or so. Not only would you have a hard time putting out your eye with it, but to do so would involve putting Gimli in a position to be launched a couple of inches into your eye. While I have to put an obligatory “don’t try this at home”Â here, if for some reason you disregard all of our advice, make sure that the hospital puts “eye injury via plastic dwarf” in the records.

The lamps on either side of the throne are interesting and include four rocket fins, which I’m always looking for in space custom builds (what can I say, I like missiles), along with some trans-yellow fish bowls. They are held together by a long bar, the same as Gandalf uses for a staff, but the connection on either side of the throne is just brick to brick, making them easy to knock off. 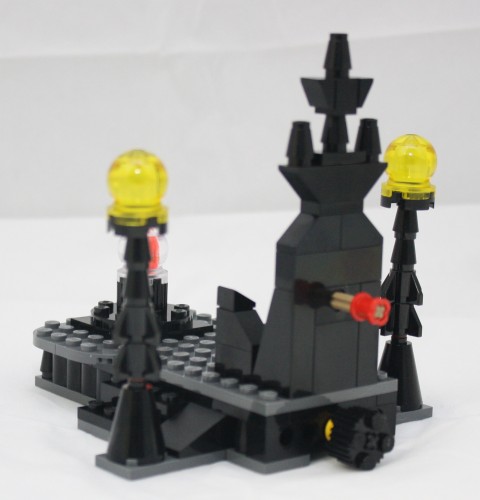 The actual flick-fire mechanism is designed to launch Saruman out of his throne once the fight starts between him and Gandalf (a fight that Gandalf ultimately loses). The problem is that it only works if you position him with his arms straight up in the air (and thus not holding his staff), and seated. And by works, I mean about a 1-in-5 chance of actually getting past the mechanism. There are several other ways they could have built a launcher in here that worked better, like making the chair tip, or at least the base of the chair. This is just wasted parts and space since it doesn’t work well.

There’s also a black round grill block that attaches to some technic mechanisms that you tread through the base of the set in order to spin theÂ PalantÃ­r. 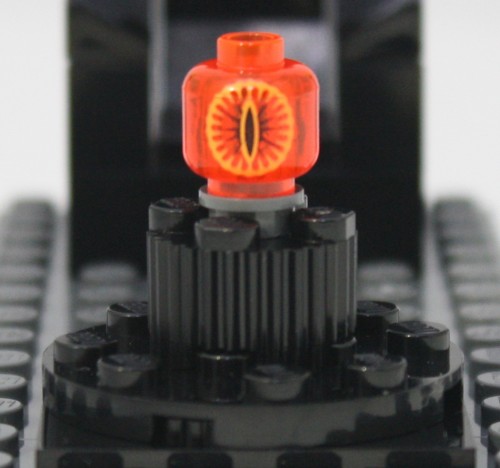 TheÂ PalantÃ­r itself is probably the highlight of the set other than Saruman. Sure, it’s just a printed trans-orange minifig head, but I for one can’t wait to get several more of these and find minifigs to put them on. It’s a cool effect for an alien head, especially if you combine with some good hair or a helmet. It also sits on a black grill block, which is another rare-ish part that is now easier to stock up on (being in, yes, the Tower set as well as the “no one really wants to buy this” Z-95 Headhunter).

In the end, this set delivers a decent enough value as both a set and a parts pack. While a lot of the technic stuff takes up bulk in the set that may have been better used to extend out the platform in place for a battle, you can’t argue with the parts you get. 113 parts isn’t bad for what effectively is a wizard battle pack, and all of the pieces are generic enough to justify getting more than one of the sets, if for nothing else than to update your Magneto minifigs.

There are better versions of the minifigs in other, far more expensive sets, so this is a good way to expand your LotR cast without breaking the bank. And even if it is a dangerous tool, theÂ PalantÃ­r is a powerful thing.

Verdict: Buy it, even if you don’t want the scene, it’s a decent parts pack and Christopher Lee demands you add him to your collection. You can pick up The Wizard Battle on Amazon.com right now.