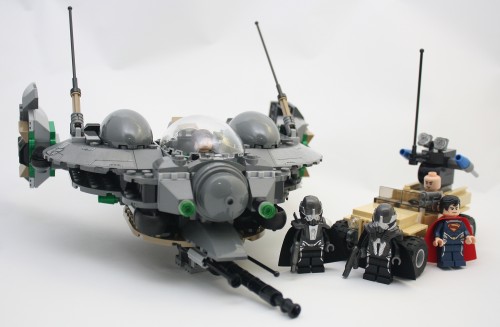 When I watched Man of Steel, I was overwhelmed by the fact that somehow, a “small town” had that much stuff that could get tossed around and blown up. Sure, it was effectively like a small town drag that absolutely litter the midwest, but it wasn’t accurate in the least, since there wasn’t a Walmart or Dollar General to be seen and most of the shops looked to still be open and in good repair. That and thinking that a bit of destruction could only serve to upgrade any place in Kansas (seriously, the only good thing to have come out of that state is the Interstate to somewhere else).

Really, the battle was almost overwhelming, at least until you saw the whole Metropolis scene at the end of the film and realized that this set should probably have been called “The Smallville Dust-up.” This set is the most expensive of the Man of Steel sets (thus far), and features the closest thing to an “iconic” ship that we saw, the Black Zero DropshipÂ thatÂ transported people who had suits that could fly. I know, I don’t get it either.

At $50, this set is certainly more of an investment than either of the other two sets (combined), and has a bit going for it at first glance. The question is, does it keep that going for it when you break it down?

Of course, there will be spoilers in here. So don’t come crying when you found out that Braniac killed a couple of polar bears while breaking in to the Fortress of Solitude during the Battle of Smallville.

Given that I’m writing this before I publish my review of the $40 Iron Man 3 set, Malibu Dream House Adventure (or something like that… I can’t think Malibu Mansion without trying to fit in a Barbie joke for some reason), I can’t quite compare the set in value to it. But some of the other $50 sets include the Daily Bugle Showdown (which includes some bricks and Nova… not Nick Fury which I’d originally put), the Batmobile vs. Two Face, and my personal favorite from the Super Heroes line, Hulk’s Hellicarrier Breakout, there is certainly some competition out there.

For minifigs, we get a couple of short sticks off the bat, with Zod and Clark being identical to what we got in the Black Zero Escape set (and Zod without the armor the same as Metropolis Battle). More than that, Zod is only involved in the first few seconds of the entire battle, right before Superman * bleeps * him up for hitting on his mom. Or threatening her. It sort of blurred together for me at that particular scene.

Side note on the movie, I actually really liked how they handled that whole powers when exposed to the atmosphere thing in this movie. Back to the set though… Zod was knocked out of the fight in the first few seconds, and the actual “battle” (if you can call a whole mess of collateral damage between accelerator suits and a super hero a battle) is between Superman, Faora, and Nam-Ek. Seriously, the armor really reminded me of the fight in Rise of Cobra, except it wasn’t just gawd awful. 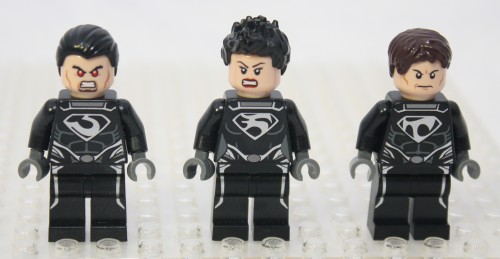 Which is probably why the set includes Zod, Faora, and Tor-An. For those not up in your nerdy Superman canon (I had to do quite a bit of time on Wikia and IMDB for the names), Faora was the woman and Tor-An was the doctor / researcher type that stole Superman’s blood. He did fly down in the ship and rescue Zod, but that was pretty much it. His figure looks nothing like theÂ disposableÂ actor who played the character, but I think the logo did match.

Faora looks pretty good, and is captured well. The hair, especially, works on the figure, even if the head is just a recycled Satele Shan from the Republic Striker fighter Old Republic set. It is a little strange that her armor was shorter than Zod’s was, but I can’t really remember if that is normal or not. 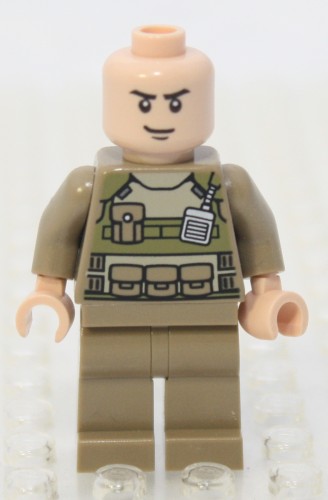 Rounding out the set, we’re get an Detective Elliot Stabler minifigure, who was playing Colonel Hardy in this movie. If you don’t know who Detective Stabler is, turn on your TV and start changing channels… within about five or six clicks, you willÂ undoubtedlyÂ come across a Law & Order: Special Victims Unit rerun. All questions should be answered.

I actually quite liked the role he played in the movie, even if he was somewhat under-utilized. He makes sense in this set as a figure, especially given his interactions with Faora at different times in the movie. However, I would have never connected his part in the movie to this minifigure unless I looked up the names on both S@H and IMDB. This is basically a generic soldier figure… it looks nothing like Chris Meloni, who was not bald (a military cut, yes, but he had hair). I can see a lot of people buying multiples of this figure though just for the military torso. I may even end up doing that…

The weird gun he has? Not so much, but I guess LEGO still isn’t ready to include a Sig 9mm sidearm given their strange policy on guns. Revolvers, rifles, bombs, lasers, swords… all okay. A modern sidearm? NEVER! What he is missing, given the scene between him and Faora, is a knife… and as I’ll get in to a bit later, the vehicle he was in for the battle.

Much like the Black Zero Escape set, the Battle of Smallville is defined by the figures that aren’t included. Why isn’t there a Nam-Ek figure, otherwise known as “the tall guy that wasn’t a real person” involved in the fight. Seriously, he was all CGI. I guess you just can’t find tall people to play bad guys anymore? He should have been in here over Zod, and honestly, for $50, I would have liked to see another figure, possibly Martha Kent, who figured prominently into setting up the whole battle, or another nameless soldier. 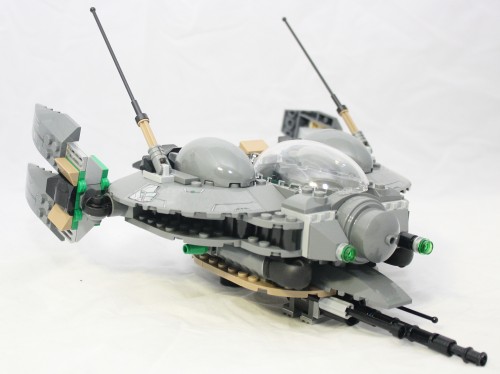 The actual LEGO part of this consists of two things… the Black Zero Dropship that shuttles off Zod and drops off Faora and her CGI friend, and a little military jeep. 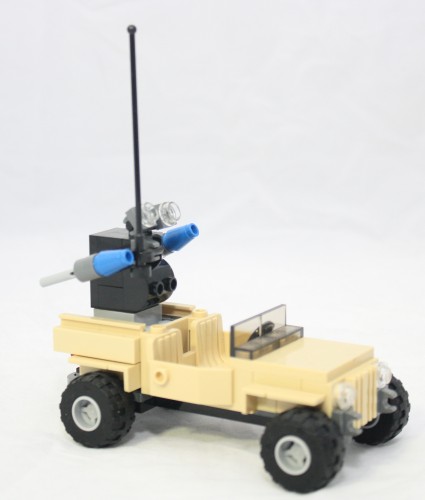 The inclusion of the jeep for the colonel is nice, though I am seriously wondering what movie they were watching, as the military came into Smallville to smoke the Super Friends Â in a pair of AH-6 Little Bird helicopters (one of which carried Hardy as the field commander), and a few AH-10 Warthogs. I guess capturing Superman and attacking the Kyptonians was a joint operation?

The Jeep isn’t bad, I suppose, but this thing really needed to have some helicopter presence. That was the character’s whole place in this scene. His chopper was destroyed, and he’s the one that had the stones to actually stand up and take on Faora even after discharging all of his ammo. He brought out the knife, in front of the wreckage, and stood his ground. He impressed her, something that I doubt any other human had. Given that this was a $50, and the chopper already small, they could have put in the right thing.

Otherwise, it’s a tan jeep with a silly missile launcher set up on the back, complete with flick-fires. It’s not a LEGO set without flick-fires. 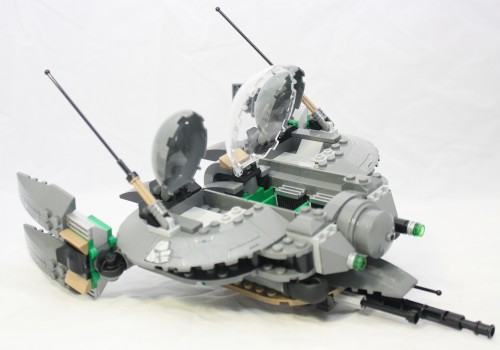 The dropship is big, and ties up the majority of the set. Compared to the movie rendition, it’s a decent LEGO representation. Sure, it has a few stickers, but the overall shape and style fits it… for the most part. The only part that really bugs me about it is the opening of the cockpit and storage areas above. 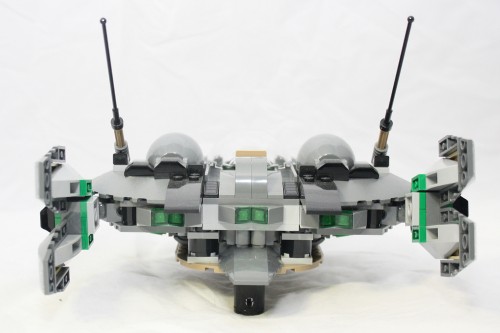 The dropships had a ramp that opened on the bottom, and the top was just a bubble. It would have added complexity, but it would have been more like the movie (and given a bit more playset value).

The underside is like most undersides of LEGO ships anymore (read, flat and boring), but does include a decent little cannon. We also get a bit of a throwback with the actual launchers for the big ship instead of flick-fires. I don’t remember it shooting missiles, so perhaps these are parts that could have been better being something else, but adds some fun feature to the ship. Plus, these could actually hit your eye from a distance, unlike most of the things that carry the “you’ll shoot your eye out, kid,” warning. 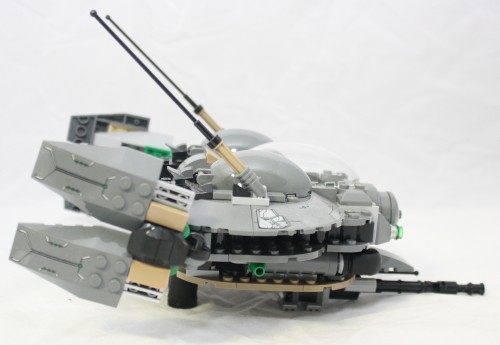 The side pylons and the antenna are both hinged, with the pylons on a technic pin that can rotate, and both can spread apart. It captures the organic feel of Krypton technology.

The whole of the dropship does have a decent collection of parts, including small saucer sections (which were also in the Escape set), a bubble cockpit in clear and two in dark grey, and other assorted goodies. Also, if you like trans green cheese slopes, this is the set for you! It’s a strange mix for stuff, but overall, I like the part makeup a lot more than I did in the Escape or Metropolis showdown. I’ll leave if that’s because of the big price difference or not up to you.

In the end, this set probably delivers the most value in the line. It actually looks like what was in the movie, and has characters that were (mostly) involved. At $50, this is firmly in the modern “mid-range” for LEGO, and it feels like a mid-range set. It would be a great set if it matched the $40 price-point of the Malibu Mansion Attack, but otherwise, it’s above average.

Verdict: Pick it up if it’s on a really good sale, but probably hold off at full price. You can get the Battle for Smallville on Amazon, along with the other two Man of Steel sets, Metropolis Showdown and Black Zero Escape.