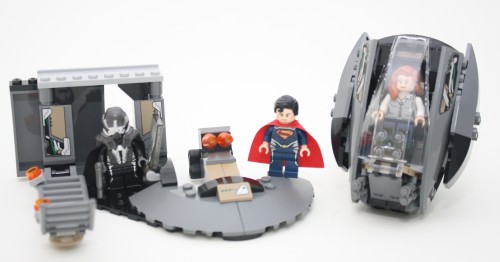 You know, I had no idea that the name of the really big ship in Man of Steel was called Black Zero until I looked it up in the product description. An interesting throw-back, since the original Black Zero was considered “The Destroyer of Krypton,” and later was a Superboy villain. In this case, however, we’re focusing on the escape scene with Lois Lane jumping in an escape pod and going typical Lois Lane on everyone (read, in need of saving).

I guess it’s better to be needing saving in an escape pod than it is to just be on a plane that happens to start falling out of the sky. At least here, Superman was around for a reason, and not just being a crazy stalker of his ex. And if you don’t get that reference, you’re lucky. The rest of us actually watched Superman Returns.

Black Zero Escape is the $20 entry in the Man of Steel line. The $20 sets in the Super Heroes line has some pretty notable company, with such hits like theÂ Superman Vs Power Armor Lex, Wolverine’s Chopper Showdown, and Cosmic Cube Escape all being in the same price point (and still available in most stores). Of course, given that Iron Man 3’s speed boat is also in the same price point, it’s obvious that no standard is perfect. Maybe Black Zero Escape can break the pattern?

If you haven’t seen Man of Steel, there are going to be some spoilers in this review. So don’t email us and complain that you found out Superman’s penguin friend from the Fortress of Solitude wasn’t as lucky in his escape.

This set is kind of hard to peg down, to be honest. Sure, it gives us Lois Lane, but it also has the exact same Superman as Metropolis Showdown, as well as the same Zod, only now it includes his armor. It has the escape pod, which is an important part of the plot and development of the relationship between Clark and Lois, but it also has a whole bunch of other junk along with it that have pretty much nothing at all to do with the ship. 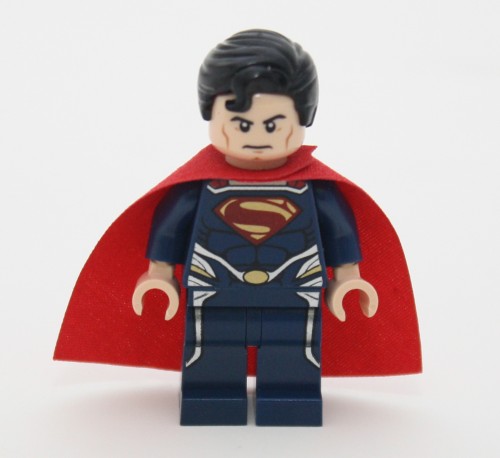 Superman is unchanged from all of the other sets that feature him. You can go hit up the review of Metropolis Showdown to see how the figure stacks up, if you like. I also get that this is called Man of Steel (there’s a reason it’s not called Superman: Man of Steel*, by the way; did you notice it?), but I have to ask, just like I did in the PotC and Batman sets… does the Superman minifig really need to be in every set? We got away with the Star Wars sets not all having Luke Skywalker in them, maybe we’ll get that these are Superman sets without Supes in there. 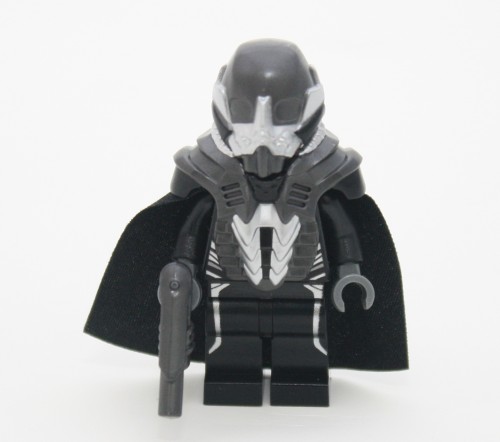 Zod, likewise, is the exact same figure under the armor. Â Also, he has a gun now, but that fits perfectly with the movie and his role. What doesn’t fit, really, is his inclusion at all in this set. While Zod was on Black Zero during the whole capture and fight, he was not heavily involved in the fight leading up to the escape. Faora-Ul was (the woman, which is far more lore-friendly than the made-up Ursa was in Superman II), who took shots at Lois in her escape and actually challenged the rest.

Zod was busy looking for the codex, etc, and Clark wasÂ unconsciousÂ leading up to the escape. In fact, the most involved characters in this whole scene were Lois, Faora, and Jor-El. So having Zod in here is just… weird. 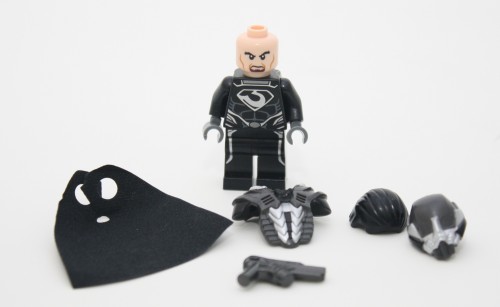 That aside, broken down, you get a fair amount of stuff here. I do like that LEGO bothered to include the hair along with the armor. That’s a fairly common gap in a lot of sets (see: every Iron Man figure), so always good to see. The big problem I have is that the helmet and the armor, while two pieces, don’t really work apart. The armor you can make work, but the helmet leaves way too much of the back of the head exposed. 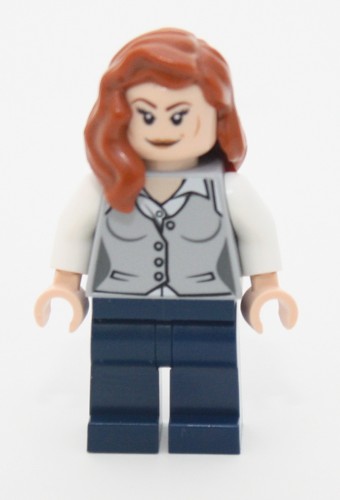 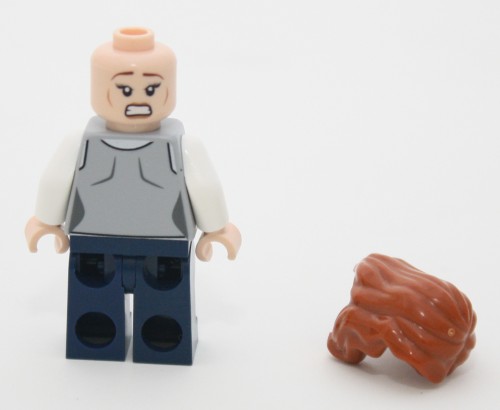 As for Lois, played in the movie by Amy Adams (thus explaining the red hair… even though Lois has always been a brunette), this is actually a fair likeness. The hair is not right at all, since she spent almost the entire movie with it tied back into a ponytail. It’s a strange choice, since there are other hairpieces that would have looked better and still fit (like the pirate maiden hair from the recent pirate line).

The outfit, however, is spot on. The regular face, not so much, but that’s more of a hard to get. The panicked face, though, actually fits the whole scene well, especially in the whole fall through space. 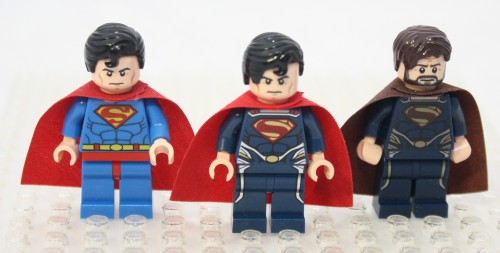 Again, the set is defined by figures that are missing in it. No Jor-El (you had to spend $75, or hit up Bricklink/eBay like I did, to get him), no Faora (she’s in Smallville) or Tor-An (also in Smallville), who were both more prominent in the scene than Zod or Clark. 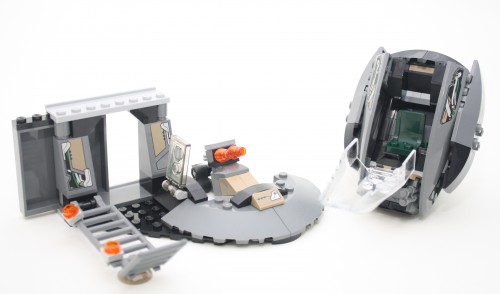 The rest of the set surrounds the “escape pod” that chucks Lois off the ship and a small control section and wall area, along with perhaps the most lazy “walkway” we’ve ever seen. 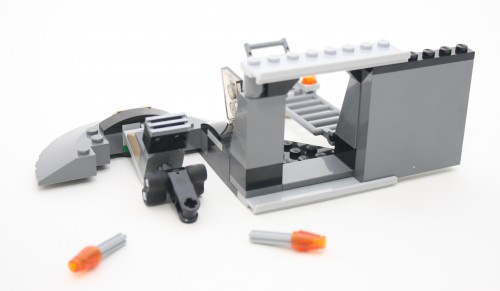 The walkway features a door, along with perhaps the worst flick-fire mechanism that has ever been made. I mean, did LEGO put this in here just to get people like me to never complain about the standard flick-fires again? Or… you know what, I can’t even imagine why they did it.

Where as the issue with this entire thing… it simply doesn’t look like anything in any of the scenes around the escape pod. The pod was in a small circular room at the end of a series of hallways. If you take out the flick-fires and put a table there, it might have been the bed that Clark was tied to, but that would remove most of the rest of it. 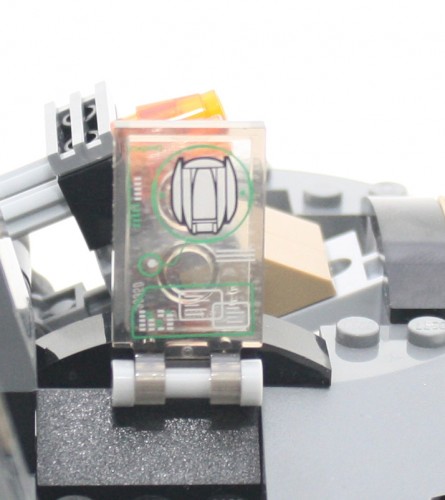 Also, you do get a fairly interesting sticker, apparently to launch the pod (or perhaps to punch a hole in the side of the ship). I actually like the sticker well enough, it’d make an interesting accent. There are plenty of other stickers that aren’t quite as nice, mostly to try and add some alien-looking accents to what is otherwise a big wall of grey. 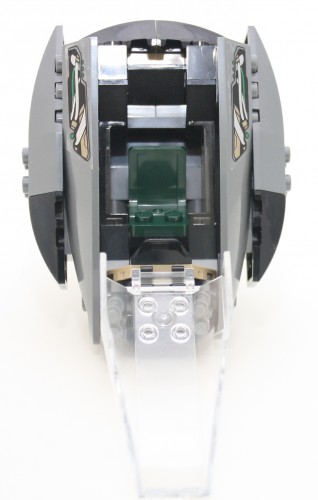 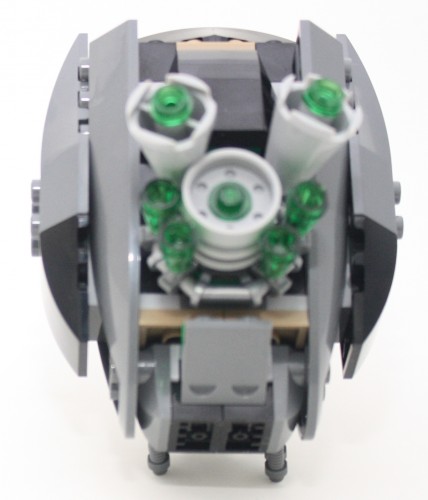 The escape pod is about as good as it can be in LEGO. It is both pod and escape-like, so it has that going for it. The engines are fairly cool, with a metallic silver octagon plate, and there are a few other interesting parts, like circular 1×1 tiles and some grates. Also, it has a pair of guns for some reason. 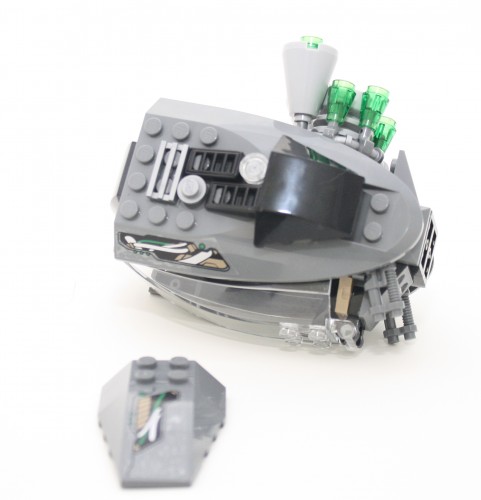 The strangest thing about the escape pod, however, is the details in the picture above. You detail both sides of the pod, and then promptly cover it with a stickered slope. There’s no indication in the instructions that breaking these off is a play feature, you just detail the side of the ship, cover it up, and forget it. Is it to try and simulate the damage from where Faora shoots her pod, and Clark has to rescue her? It’s just odd to put detail like that on a build and then not do anything with it.

In the end, this set is average, at best. Sure, you get Lois lane. Yes, the escape pod is done well (even if strangely). But the rest of the set doesn’t fit, the rest of the figures don’t belong, and there’s not a lot of parts utility in the set itself. Like I said earlier, tough to pin down. It’s probably a buy-once set, on sale, if you want to be complete. Otherwise, pick up a Lois Lane on some aftermarket site and get your Zod elsewhere.

*for those who don’t get it… the name “Superman” was only mentioned once. He was always called Clark, Kal, Kal-El or occasionally Joe

Verdict: Buy if you find it on sale, or really want Lois. Otherwise, skip it and grab a Lois Lane on the aftermarket.Â You can pick up Black Zero Escape on sale right now at Amazon for 15% off of MSRP, just $17.00: 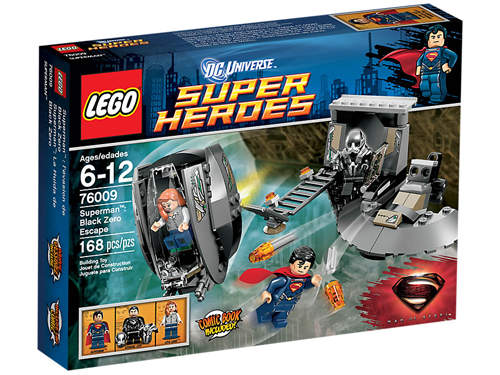