Have I made a joke lately about my proud history of timely reviews? Probably, given the sheer numbers of reviews that I have done well after the set was brand new and the movie in an out of theaters (or DVD), I probably have. To make matters worse, I often take the pictures right away, and then get busy before writing the review.

Case in point, Escape from Mirkwood Spiders, a set of pictures I took last year and uploaded to Flickr for comments. In the run of Hobbit sets, this set, along with Barrel Escape, stand out simply because they aren’t in the first movie, they appear somewhere later in the whole thing. Presumably, as this set includes Legolas, and he’s been shoehorned in to the second (and third) movies, it will probably show up in the upcoming “The Desolation of Smaug.”

Given that spider attacks are something of a thing in the series in general, it wasn’t surprising that they’d show up here. Though somehow, I doubt they’re the high fantasy, talking sort that Bilbo ran in to. All of that being said, how does this $30 set stack up in a world where the $30 sets often have been the stars of their line?

Part of me wants to say spider’s are icky and leave it at that (because spiders ARE icky), but this set is almost unique enough to stand out in a line otherwise awash in grey bricks, and with castle being on hiatus in giving us black brick overload, it does tend to look different. But at the same time… stuff like this is also somewhat odd when it comes to utility.

Honestly, how many of these parts would you use in building something else, and how much would look decent sitting on a shelf? Like all LEGO sets these days, the set is defined by its minifigs. Because the LEGO marketing department is full of people that are both evil and smart, the entire company of dwarves is spread across the entire line, so you have to buy almost everything to get the whole group. At least if that’s your thing. I’m ashamed to say that it’s mine (which is why I even own more than one TMNT set)…

We get four minifigs in this set, all of which are unique to this set (so far): dwarf brothers Fili and Kili and two elves, Legolas and Tauriel.

From a story point of view, Fili and Kili are probably two of the more interesting characters. In the book, they were actually fleshed out some, and not just “some random dwarf with a name” like so many of the characters were. Sadly, as we’ve only gotten part of their story in the movie, most of what we’ve seen from them is inexperience. They were the youngest of the dwarves Fili is our little redhead with a majestic beard dwarf. Unfortunately, like I touched on in my movie review, I had to actually go look up which one was Fili and which was Kili. Their minifigs look totally different, but as characters, nothing really distinguishes the dwarves outside of whatever joke they’re part of. Since Fili and Kili are always together, and the butt of the same jokes… well, you see the problem.

Of all the dwarves other than Bombur, Fili is the most striking physically in the movie, thanks in part to elaborate braids but more to the fact he’s got a really big nose. Of course, a lego minifigure has no nose, and the hair doesn’t show off those braids at all, so we’re left with a minifig that loses the traits of the character. It does have little mustache braids, which you can sort of see, but the printing ends abruptly at the bottom of the face, so it looks mostly like it’s just a bit dirty. Kili, on the other hand, bears a decent likeness to his movie counterpart. Partially shaven, the heathen, unkempt hair (which is the exact same hairpiece as Fili just in black). The torso smacks of Aragon from the LotR sets, so maybe they’re setting that up as some sort of cliffhanger in the third movie. Also, that gap in the torso was left for a certain member in the FBTB chat channel… you know who you are. Both dwarves come with an alt face, quivers, and bows, because dwarves are known for their bow use. Okay, Tolkein’s dwarves do use them, to be fair, but still. Both characters have an angry alt-face, something that has been noted as of late. Personally? I like the smiling face on Fili, but the indifferent face on Kili isn’t quite as well. However, both of those fit the characters better than the angry faces… especially on Fili. Next up, we get everyone’s favorite elf, Legolas. I mean, with a name like that, you know he should be killer in a LEGO set. Of course, apparently what that means is they want to try to make him look way more manly than Orlando Bloom did in the trilogy, but what can you do. Same hair and a slightly (and I mean slightly) different face, but completely different torso. I like the use of pearl gold for the arms, and that there’s no flesh printing on the torso. But like so many other figures as of late, the fact that the printing on the legs and torso doesn’t line up just detracts from the whole thing. Like most figures this side of The Lone Ranger sets, he has an alternate face. I don’t remember Legolas ever having an expression other than “concentration” or “hipster mirth face” in the trilogy, but apparently we can make him angry. We probably wouldn’t like him when he’s angry (I would, however, love to see what an Elf Hulk looks like)… After that, we get a “unique to the movie” elf, Tauriel. While I have absolutely no issues whatsoever in adding a bit of diversity into the lily-white sausage-fest that is Middle Earth (seriously, go check out LotR Statistics… it’s 83% men; good luck on that dating scene), this is kind of a strange way to do it. We don’t know much about her role in the upcoming movies (we don’t know much about Legolas either, other than Orlando Bloom obviously needed a paycheck), so maybe she’ll be given a prominent role like Arwen was in the movies.

I suppose we should at least be happy that she was given a minifigure at all, given that we still don’t have an Eowyn minifigure and finally just got a Episode II Padme minifigure in the Star Wars line. As for the look of the figure? The face is unique, which is nice, and another redhead, this time with freckles! As for the torso… it’s basically like Legolas’ torso except in green/brown and with breasts. She does have an alt face. Apparently, elves don’t smile.

The set itself includes a pair of the namesake spiders that our dwarf and elf friends are trying to escape from. Compared to Shelob, these are obviously quite a bit smaller and somewhat simple. Building wise, they’re nothing all that special (though the 1×1 studs on there are the glow-in-the-dark variety). Not a lot of feature to them other than legs and a pair of fangs, along with an abdomen that can bend up. Simple and I guess effective. There’s more thought put into the trees of the Mirkwood forest, at least based on the size of them. At first glance, it’s the sacs that really stand out, made of a mesh webbing that’s perfect for holding up the odd dwarf or two. The smaller of the two is basically just an exercise in slopes and leftover parts. One is left wondering how either of these huge spiders could climb up the tiny trees to make the webs. The spider sitting on the smaller tree part is glow-in-the-dark, and it has some small arches in black, which is kind of nifty. The larger of the two trees has some odd play features included with it, including a very awkward pin system to cause the tree to tip. If I was to guess, they’re basically trying to find a way to show the caught dwarves escaping from the silk sacs, I suppose. In truth, when you put it together, it just doesn’t feel right. The build itself is awkward, moving the pin into position to hold it up, and the whole thing just feelsÂ unnecessary. Add to that something to shoot out a spider (I think), and we’re looking at a set that’s just trying to up the “what the heck” factor over the flick-fires on Weathertop.

On the other hand, the one thing I just absolutely love in this set is the inclusion of the little mushrooms that decorate the base of the trees. We can always use some more foodstuff parts, and these fit the bill nicely.

In the end, this set is mostly aÂ disappointmentÂ  Nothing about it really stands out. Sure, it has four unique minifigures, but since even the games and T-shirts from LEGO these days come with “exclusive” minifigures, the shine has kind of come off that apple.

Parts-wise, there isn’t a lot of useful parts here. I love the mushrooms, the mesh has some utility, and the prospect of a few thousand of the dark-brown slopes makes the castle roof builder in me happy… the rest of the stuff is mostly pack away and never use stuff. Most everything is slopes and arches, the red plants could add some accent but are sadly in the largest (and least useful by themselves) size. In the end, this set reminds me a lot of the “Scorpion Knights” run of the castle theme “Knight’s Kingdom II” back in the mid-00s. Lots of black angles that lost utility when you broke down the set. I’m pretty sure that’s not a good thing.

Verdict: Buy it on sale for the minifigs, pretend like it’s just an expensive battle pack and put away the parts

You can pick up Escape from the Mirkwood Spiders, and the entire Hobbit or Lord of the Rings line, at Amazon.com. 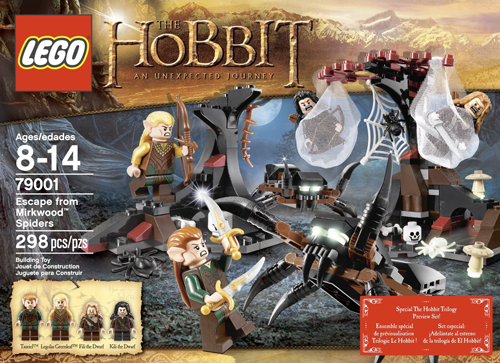