The second set of the series 3 planets is basically a wrap up of the final scene from Episode II. If you only watch the films, you many remember this ship from your “Hey, that kinda looks like a Star Destroyer… neat” moment. Though it’s really more of a Star Annoyer at best, so let’s see how it shapes up as a set. Coruscant is one planet that definitely stands out in the Star Wars universe, so I’m glad that it queued up in one of these sets sooner rather than later. Best print ever. So far for me anyway. I always liked the concept of a planet that is basically one big city and the printing on this not only looks great, but I think it could be useful in many different builds. It has a nice steampunk vibe to it and immediately made me think of a spherical control unit similar to the ones used by the Ferengi. It’s an attractive globe all around and I wouldn’t mind having an extra of this one. It’s difficult to tell if the three colours of printing are off at all, but if they are slightly misaligned it certainly works for me. The stand is the same as in the other two, so I won’t spend anymore time on it. As I mentioned in the opening, the Acclamator I – Class Assault Ship’s big moment was at the end of Attack of the Clones. It’s made numerous appearances in the EU including the Clone Wars toons, so some folks will be far more familiar with it than I. One thing I know though, it’s another big flying triangle and we certainly need more of those. It’s an alright little ship and this model is a reasonable facsimile of it. Of course it has it’s flaws and they are as numerous as they are pointless and uninteresting. The bridge is too big and shaped wrong, the ship isn’t wide enough and doesn’t come to a sharp enough point on the front. The attempt to recreate the dark grey center stripe is admirable, but it leads to chunky accents that may or may not work well for you and are an obvious (though fairly welcomed) attempt to add some detail to a big grey triangle. It’s a mini, they can’t always capture all the shaping and details and in this instance I don’t really care. The biggest issue I see is the angle of the “wing”. The sides didn’t slope enough on the JSF and on this one they slope too much, so I guess we could say it balances out and walk away. The Clone Trooper makes me laugh a little because it’s a new torso, helmet and face print, but it still looks like the same old clone. How many different clones do we need? At least he also shows up in the clone battle pack that is currently out, so if you feel the need to accumulate a mass of them you have a couple of affordable options. I don’t see the need to build up huge bunches of expendable soldiers anyway. Why bother trying to get your hands on, oh let’s say 500 of these guys when chances are you’ll never do anything with them anyway. They just become a sad reminder of wasted time and money, though they can be a valuable source of ammunition for the other geeks you hang out with that may want to tease you for their own amusement. Say, in a review, but they’d have to be a pretty big jerk to do something like that! Mwahahahahahaha!

Annnnyhoo. It’s a perfectly good clone, but it’s hard to take calling them clones seriously. Aren’t all clones supposed to look alike? Did all the complaining about getting the “same old clone” prompt the onslaught of unique ones? Didn’t they know that that would prompt more complaining? Silly LEGO…

Vedict: Based on the planet alone, I wanted it. The ship is uninspired and really doesn’t do much for me and I sure don’t need another clone. If it hadn’t been for Coruscant I might have skipped this one, but that isn’t because it’s a bad set. I have little doubt some would have more of a connection to this ship and figure than I do. 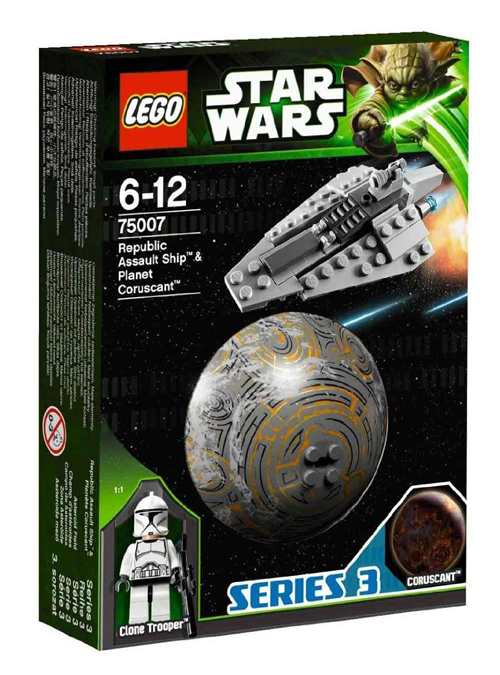