Ultimate Showdown. The name inspires visions of an epic battle between the Armoured Avenger and his megalomaniacal archenemy that would tax the limits of the two foes abilities and resources, ending in chaos, destruction and a spectacular defeat for one side or the other. Alright, so the name is ridiculous and if this is really how the end of the film will play out I can only hope that LEGO has either made a gross misinterpretation of the script/concept art or this represents only a tiny fraction of a larger scene. These three Iron Man sets threw me for a loop, because I expected them to go up in size as well as number and the naming seemed to go along with that assumption. If we’re still to take these sets as the progression of action throughout the film, it would seem to play out as follows. 1) Early on in the film, the Mandarin attacks Tony’s home with helicopters (the trailer confirms this one). 2) Iron Man teams up with War Machine (Shane Black has already confirmed there would be a buddy cop style act) to take on Aldrich Killian and stop him from infecting people with the Extremis virus via missile launching boat. And 3) His Ten Rings Organization depleted of air and water attack vehicles, the Mandarin confronts Iron Man with his flame-throwing ride-on lawn mower/golf cart… thing. I suppose this thing could represent a huge tank, that would make a much more formidable vehicle to take into battle against old shellhead. Or it might, if they hadn’t already shown him blow one up in the first movie with his old school Mark III suit, zero effort and a whole lot of attitude. I’m guessing the Mandarin won’t be a recurring villain. Forgetting about what this set could have been and speculating on how it will go down on screen, let’s focus on what we actually get. To start, we get a couple of exclusive figs and they’re actually better than I thought when I first saw them. The first fig we get is the next numerical suit in Tony’s closet, the Mark 17 Artillery Level RT suit or the “Heartbreaker”. Personally, I would have preferred the Mark 18 Enhanced Holographic Projection suit aka the “Dream Maker”, or the Mark 19 Experimental Pheromone Dispersal suit or the “Love Taker”, but let’s not mess around any further. This armour is the busiest of the bunch in my opinion and these new releases have not only waist printing to go along with the leg prints, but now the toes are inked as well. I can’t imagine anyone is spending that much time looking at Iron Man’s feet, except maybe shoe fanatics (not my first choice of name for such a person) or some sort of self aware robot with a foot fetish. I don’t really have a problem with the busy chest and back because they match the pictures of the suit well and even the legs are fine with me, but the helmet is another issue. The point they’ve painted on at the peak is off and the silver on the chin is too much. There’s basically just a silver pin-stripe on the chin leading up to a larger panel on the back of the jaw and the peak doesn’t encroach down that far on the face and certainly not to so sharp a point. I’ve already started calling him Avastark The Last Iron Bender because making fun of a tiny, tiny toy makes me feel like a big man. They should have left his hairline alone and just added the dark spot on his chin and called it a day. The blue eyes are a nice touch to match the chest and change it up a bit. I honestly didn’t even look at the Mandarin figs that closely when pictures first turned up and was pleasantly surprised when I received the sets to find that the figs were different. When I did notice, I thought I’d end up liking the fancy robed version from the Malibu Mansion set better, but I’m not so sure now. It may be more reminiscent of the classic Mandarin, but this torso strikes me as far more useful. A grungy, guerilla-ish soldier torso with a bandolier belt and tattered bandana… yes please! It screamed Full Metal Jacket/Tropic Thunder to me when I was putting him together and the olive pants are just a cherry on top for me. The beard and hair piece, don’t work particularly well together for me, but they’ll do and will be far more useful separate than together. I’m not sure the CMF sumo wrestler top knot will work here, but it’s worth a try and I will definitely be adding a face print with sunglasses to mine for laughs. Moving on to the Mandarin mobile, it’s time to address an issue with Super Hero sets in general. I’ve heard people lament that the majority of Star Wars poly bags are vehicles and they wish that they’d take a page from the Super Hero line and have more minifig-centric polys. This issue is actually the reverse problem for LEGO. It’s been stated that LEGO’s biggest seller are the vehicle based sets and that play sets don’t do as well generally because Vroom/Swoosh/Pew! (probably why most have at least a small vehicle). I’ll buy that because Star Wars is a perfect model for this being a huge universe filled with ships, speeders and space tanks. Sure, we may see some vehicles again and again, but that’s because LEGO knows we’ll recognize them. Super Heroes on the other hand, don’t need vehicles generally. Batman (who is a crime fighter not a super hero, but I digress) needs vehicles and he has probably the only truly iconic one in all of comics, the Batmobile. That would be why we primarily get Bat-sets on the DC side and why we’ve already had two regular Batmobiles, a UCS version and a poly, not to mention two Tumblers and a host of other Bat-traptions. The Avengers was a huge movie last year, so we got a Quinjet set and poly, but just think about what other Superhero vehicle could be considered iconic? How many kids would know what the Fantasticar looks like? The Blackbird X-jet was based on a real vehicle, but it was retired before a lot of kids building these sets were even born and it’s pretty hard to recognise an invisible jet. Amirite? Don’t bother listing endless Super Hero vehicles below, because none are anywhere near as famous as the Batmobile or Millennium Falcon.

This is why every time there is a new toy wave, we get Iron Man on a 4-wheeler or the Spider-buggy. I guarantee it’s why the new Ultimate Spider-man cartoon immediately brought in the Spider-cycle and it’s the reason Super Hero polys are primarily figs. In the super hero universe, vehicles are what bad guys throw at the heroes. At best they’re used for underpowered heroes to span greater distances, but they’re usually nothing to get excited about. With comics tendency towards each artist drawing vehicles differently every time, it’s difficult to even associate a specific “look” to many and so, here we are. The Mandarin drives a flaming Zamboni. It’s a small, solid build, but it falls short in every area. The design is boring and comes across as more laughable than intimidating. It doesn’t have any stand-out parts to speak of, but at least they’re useful if bland. We do get a couple more of the technic arms that came in the Spider-cycle set. The flick-fire missiles don’t feel tacked on as they do in many sets, but the entire flame-throwing function is ridiculous and is more apt to set the driver on fire then do any damage to Iron Man. The cockpit is designed to seat the Mandarin very tightly, unfortunately the second row of superfluous cheese grater slopes makes it so he can’t even lower his arms towards the wheel. He’s constantly raising the roof, because there ain’t no party like a Mandarin party… apparently. This little bumper car looks a bit like an amphibious vehicle as many LEGO models tend to, but it just fails on too many levels. I understand that these small sets must be difficult to keep different yet interesting, but I can think of a couple of redesigns right off the top that would look a bit better while keeping the piece count. I don’t know how well they would jive with the movie, but that remains to be seen for this set anyway. Verdict: Skip it if you care about sets. It’s not worth it at the $13 the US pays and certainly not the $16-17 here in Canada. If your main concern is minifigs, then this has two exclusives and you can’t complete you Hall of Armour without it. With the upcoming “exclusive” Iron Man poly containing the cheapest suit from last years sets and no Iron Patriot in sight, you may want to jump on what you can get. Wait for a sale or to pad an order if need be. 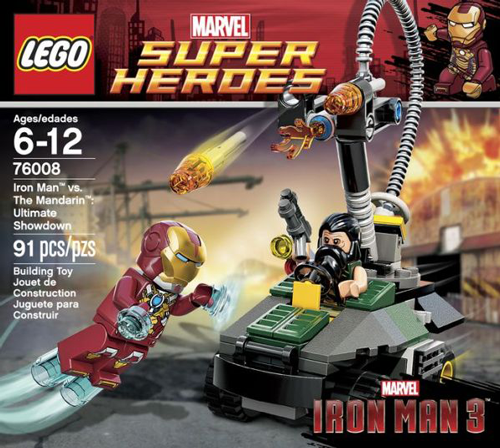