I’ve said before that I’m no real fan of the Ultimate Spider-man cartoon, but I’m a huge Spider-man fan in general. Seeing last year’s Spidey set got me quite excited, but in the end it failed to impress me and was a real disappointment. 2013 promised two new Spider-man sets in the first half and this one in particular caught my eye the right off, but I’ve been hurt before. I needed a set to come along and make me feel again.

Preferably one with Nick Fury. Oh Yay! All those Avengers sets last year and no Fury? I felt a bit ripped off since they even included him in the poster. Luckily, the Ultimate Spider-man’s resident super spy is influenced by the movie version which was based on the one from the Ultimate Spider-man comic that this show bares little resemblance to… and that Fury was modelled on Samuel L Jackson who ended up actually playing the character in the movie. Since I’m already on the subject of Fury, let’s look at the sets figures. Staying with Fury, I think it’s a good figure overall. I’m not sure why they went with his dark blue tactical suit since I think it’s been on screen for about 30 seconds tops, but a plain black torso is easy enough to come by so this is much more useful and it is the standard SHIELD look for the movie and cartoon. If they aren’t going to make an actual cloth trench coat, I’d usually have none rather than it be printed all down the torso and legs. The front and back printing of the holster strap and utility belt harken back to the characters classic design and I enjoy and appreciate that. The face is perfect for the cartoon and while it doesn’t have the scars from the movie version, I think it looks better without it and no one seemed to notice or complain when he went scarless on the Avengers poster.

Spider-man is the same figure as the one from the Doc Ock Ambush, but also from the other set this year. I’m glad they put him in this cheap, non-exclusive set, but Spidey needs some new threads. I know he hasn’t had many costume variants in the show yet, but we’ve seen him in the symbiote suit and the Iron Spider. Let’s face it, continuity is not LEGO’s strong point so why couldn’t the Iron suit be in this set, since the word is Symbiote Spidey probably won’t show up in any sets. Booooo. You know what variant has showed up in nealy every line of Spider-man toys? Battle damaged Spidey and Venom is one villain who loves dealing our hero some damage. Lastly we have the man in black, Venom. He’s quite a bit different in this cartoon, but the basic idea remains the same. The figure is a great match for the show and reminds me of Todd MacFarlane’s take on the character all those years ago. When the neckbrace is added to attach the tentacles he looks a bit odd, but we should all be used to that set up by now and honestly I prefer him without them because it lets you see the great back printing too. He also comes with two little tentacle ball things that represent when the symbiotes shoot pieces of themselves off as a weapon. They’re mostly useless, but my five year old enjoyed throwing them at the figures and the parts can be more useful individually. Call them a win.

So far, this set has my favourite figures of the year. They aren’t perfect, but I love them just the same and isn’t that what we look for in any relationship? Well, with figs this good the rest of the set must be really bad. C’mon, a flying bike and spy car, seems pretty stupid right? Of course they’re stupid, but they’re a lot of fun too. I mentioned in my review of Wolverine’s Chopper Showdown that I didn’t feel like the set had as much playability as some sets, like Shelob Attacks and this set. This set is great fun. The Spider Cycle is a totally foolish concept and Spider-man even brings that up in the series until Fury and Doc Conners explain the advantages of having such a ridiculous contraption. Once you get past that it makes for a fun little toy. In the cartoon it can do pretty much everything Spider-man can. Drive on walls. Shoot webs and drive on them. Leap great distances which it does by splitting the tires. I think that’s the implication the set is going for, but it comes with a flying car and it’s made for kids. Voila! The bike, she flies!

It looks a lot like the Batpod-esque bike from the 2012 Batcave set, but uses a couple sweet new pieces to create a deceptively simple mechanism for tire splitting. Lego really needs to make a part that allows the minifigures to straddle it like one of the actual bike molds, while also being built into more generic creations. Something like this, but taller and possibly having multiple connection points (front/back). Otherwise it’s a pretty quick build that has a nice pay-off in the play department. One gripe though is the sticker on the curved slope up front. They print, they sticker, they print, they sticker. I wish they’d make up their minds on that part and that it would be printed. I’m lousy at sticker placement and it makes me sadface. Fury’s car is a very solid build and again it’s short and sweet. The look of it doesn’t really come together until the very end, but I like the aesthetic when it’s done and even though green isn’t really a SHIELD colour… meh. When I say it’s a solid build, I mean this thing is sturdy. It’s basically built like a semi-hollowed out brick and all the bits that make it look car-like are tacked on. It’s not done as an after thought though. They used two of the 1×2-2×4 brackets for the front and back and six 1×2-2×4 brackets for the sides, so the bumpers and side panels are very secure. The main function of this build is the flying car transformation and it really works like a charm. I’m sure I’m not the only one that let out a little sigh of relief when they saw this and realized the Back to the Future set was in good hands. The wheels fold down individually and are smooth, but a little stiff. That’s a good thing though because I don’t want them flopping up and down all willy-nilly. The car rolls well on it’s wheels, but she’s quite the low rider so carpets are probably out. In flying mode she’s perfectly swooshable and makes you appreciate the little things like the SNOT techique that give the windshield a better profile. Sweet. I actually like the look of the sticker on the hood, mostly because I successfully put it on straight and I like the symbol. It makes me wish they’d printed the symbol on Fury somewhere, but more generic is probably better in the long run. The plates read MB 19 89 and I’m guessing that means Marcos Bessa designed this set and that he’s way too young. So well done young Master Bessa, well done indeed. Grumble grumble. Interestingly, that was also the year Volume 3 of Nick Fury: Agent of SHIELD began. Not his best run… This bad girl doesn’t just drive and fly around though, oh no. This lady’s got some bite too. The fold out flick fire function at the rear again works really well. You can achieve the needed pressure to fire the blast a good distance and it folds in and out smoothly while avoiding a flimsy construction. This mechanism is as sturdy as the rest of the build and goes a long way with me because if it can’t stand up to play then it misses the mark, plain and simple. Fun build all around. Vedict: Buy it, it’s well worth your money. If you see a sale, buy two. Great figures, nice build and a good value, what more do you want? This is the Spider-man set they should have launched with last year and is up there with the Lex Luthor, Aquaman on Ice and Shelob Attacks sets for giving a good balance of value, building and play.
I hope they include White Tiger in the next set. 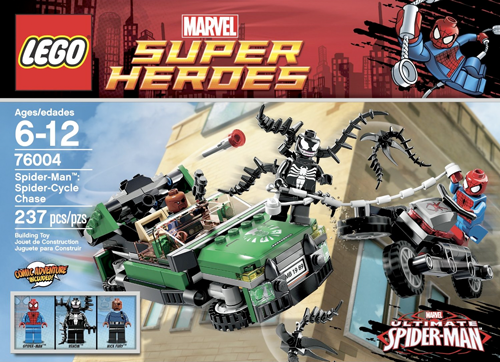