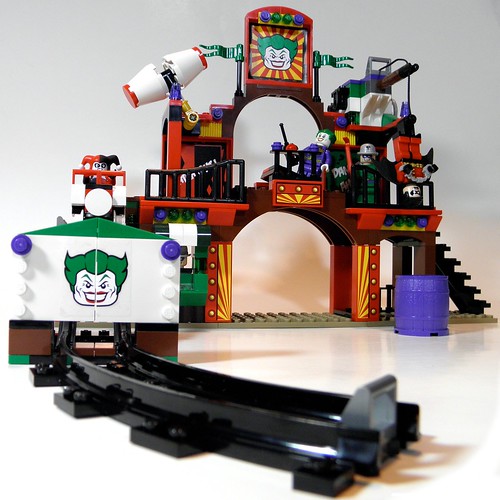 Thereâ€™s always that hard-to-find chase variant. 6857 The Dynamic Duo Funhouse Escape is the exclusive set in the first wave of DC Super Heroes sets. It can only be found in a LEGO Brand retail store, online at LEGO Shop@Home, or in a Toys R Us. Problem is, the LEGO store is always sold out, Shop@Home has shipping fees, and Toys R Us has marked up the set by $10. Iâ€™d been drooling over this set for months, hoping to find it in a LEGO stor. With some VIP points saved up and the Hulk minifigure promo, I was finally able to justify getting this set online. 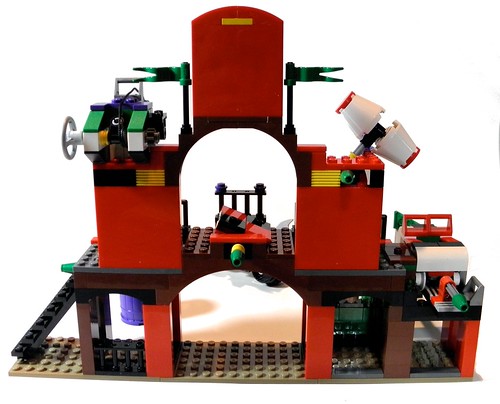 So how do I feel about my purchase? I donâ€™t regret it in the least. It was totally worth the wait. 380 elements for $39.99 isnâ€™t a great value parts-wise, but itâ€™s not bad at all. Besides, you get five awesome minifigures. 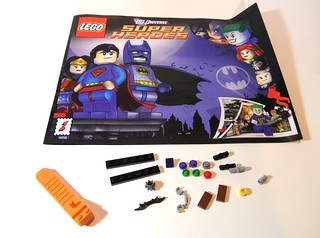 Extra parts and comic book. The comicâ€™s short, but nice that itâ€™s included. It pays tribute to Batmanâ€™s origins and provides a story for the set. I swear I missed a step or two and ended up with too many extra parts, but I couldnâ€™t find where theyâ€™re supposed to go. Oh well.

This set comes with Batman, Robin, the Joker, Harley Quinn, and the Riddler. Five core Batman characters in one set under $50. How sweet is that?

Batman and Robin are identical to the ones included with 6860 the Batcave. Joker also comes in 6863 Batwing Battle Over Gotham City. Harley and Riddler are unique to this set. It would have been nice if the others had something making them more unique, but itâ€™s not a huge deal. They are all great upgrades over their previous minifigure incarnations. Robin has a new hairpiece, Riddlerâ€™s got a new hat, and everyone but Riddler has a double-sided head print.

My one real complaint lies in Riddlerâ€™s crowbar. Itâ€™s cute that he has a crowbar, which resembles a question mark, but it would have been cooler to have a new cane accessory. That would have really brought this Riddler over the top. At the very least they could have molded it in green.

So the bad guys finally have a place to hang out. We never got one with the original series of sets. No, 7787 The Bat-Tank: The Riddler and Bane’s Hideout doesnâ€™t count. That wasnâ€™t actually a hideout. It was a gate with a post on either side to hold it up. 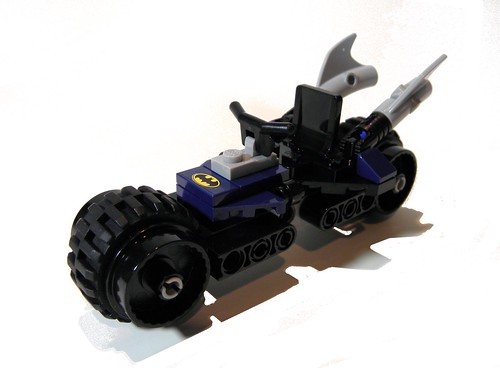 Batman gets a Bat-Pod, though this bears little resemblance to the one in the Dark Knight (Film, 2008). Batman sits upright in a seat, and it has weird fishtails sticking out the back. The dark blue and black looks nice. I like the use of the click hinge technic axels to hold the thing together. I have no idea what is up with those weird fish tail things on the back. It looks a lot better without them. Perhaps they were trying to aesthetically tie it to the fish in the acid vat? Curious. But waitâ€¦ no flick-fire missiles? Really? Is that even allowed anymore? Yes, this set has no flick-fire missiles anywhere. Even 30160 Bat Jetski has missiles on it.

As for the funhouse, itâ€™s jam-packed with play features, especially for its size. Itâ€™s gotten some flack from people for being sparse, but funhouses are usually just facades anyway. It does a good job evoking a carnival atmosphere, and Iâ€™m reminded of Jokerâ€™s hideout from Arkham City (VG, 2011). Itâ€™s got an industrial vibe, and the graffiti, mine cart feature, and Riddler fortune teller bear striking similarity to the game. If only we could get minifigures based on the Arkham game series. An Arkham City Mr. Freeze would be super cool.

There are a lot of stickers, but they rock. You get three 1x6x5 red panels, and each villain gets their own sticker for them. They are colorful and really make this set really pop. The Joker face on the saloon doors are a pain to line up properly, but itâ€™s nifty once assembled. The color scheme is a nice blend of real-world colors like dark tan and brown with primary colors like reds and yellows as accents. They work together to create a sinister carnival, which happens to be the best kind of carnival there is. 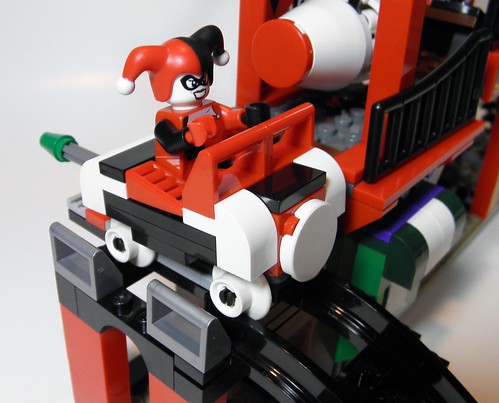 Starting on the left, you have a quick getaway cart that launches down the track with the push of a technic axel. This feature is simple and works great. The track is narrow gauge, originating in dark bley with 7199 Temple of Doom from the Indiana Jones line. The black curved track also appears in 7065 Alien Mothership from Alien Conquest, which has been found at pretty good clearance lately, and makes a great parts pack. You can add some twisty turns to expand the track. It would be nice if they could come out with a section of straight track. Right now there are only curves and slopes. Funhouse Escape comes with one of each. 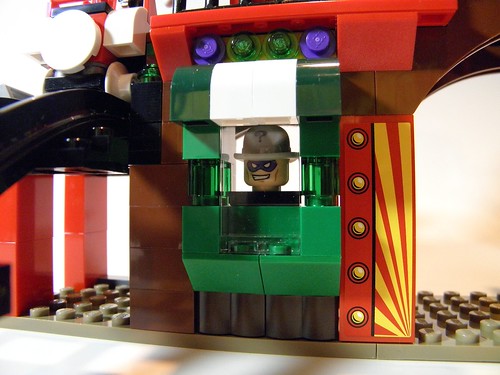 Moving right along, there is a Riddler automated fortuneteller machine on the ground floor. It doesnâ€™t do anything, but itâ€™s my favorite part of the set. Itâ€™s also cool also because it means an extra Riddler head and bowler hat. 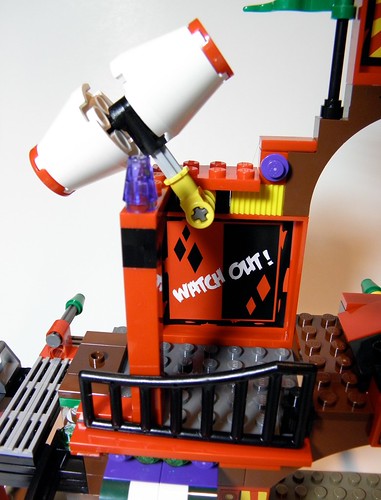 Just above that, you get a giant hammer, a Harley Quinn trademark. The sticker behind it says to â€œWatch out!â€ and has Harleyâ€™s red and black colors, so you know who put it there. Itâ€™s a simple technic pin swinging on an axel, but itâ€™s effective. Place Batman in its path and heâ€™ll go flying. BONK! 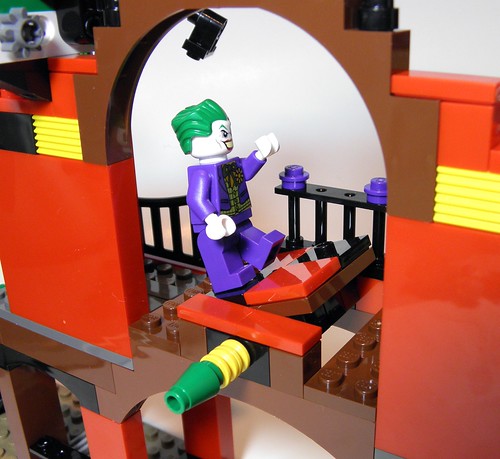 The middle of the upper level brings the disappointing part. Joker has a swiveling 4×4 platform, which doesnâ€™t do much. Its pivot point is right in the middle of the platform, so it just teeters back and forth. It would have been better to have a catapult that launches a minifigure out that large opening right behind it, but funhouses do have earthquake simulators on occasion. 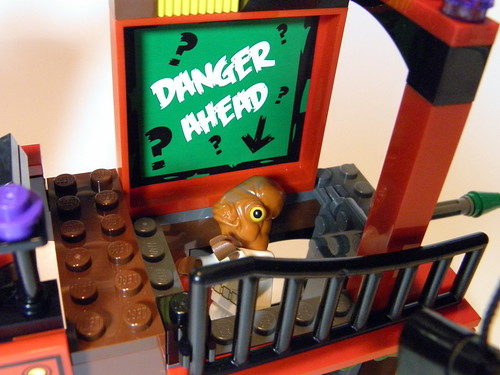 Shouldaâ€™ seen that coming, Admiral. To the right of Jokerâ€™s platform is the old standard; a trap door. Riddler has graffiti warning â€œDanger Ahead!â€ Again, itâ€™s a simple but working mechanism. 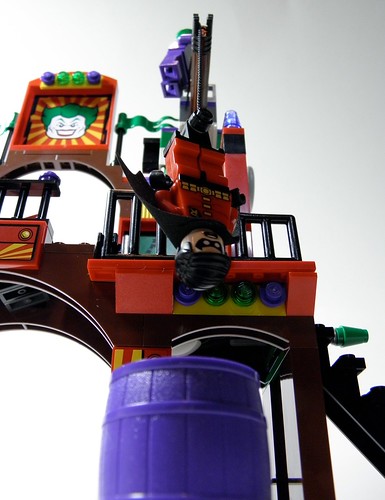 Something’s fishy here…
Above the trap door, thereâ€™s a small crane with Robin hanging over a vat of acid. Thereâ€™s a fish in it though, so it canâ€™t be that deadly. The box art shows the fish looking very much alive. My only complaint here is that the crane is fixed and doesnâ€™t swivel, but thatâ€™s an easy fix. The acid vat is a large dark purple barrel. Itâ€™s cool to get the big barrel in a new color, but Iâ€™m hard-pressed to think of a different way to use it. Robin just barely fits inside, so I would have preferred something using quarter cylinder panels for a bigger industrial-sized vat. It also could stand a warning sticker labeling it as acid. That would really sell it and make it seem that Robin is in more danger. It almost looks like heâ€™s about to be dumped in a barrel of chum.

WHAT I LIKED:
-funhouse is colorful and well-designed
-lots of play features
-good parts selection
-stickers are actually cool and really accentuate the set
-the minifigures are awesome

WHAT I DIDNâ€™T LIKE:
-only Harley and Riddler are unique, get every set and youâ€™ll have doubles of Batman, Robin, and Joker
-â€œcatapultâ€ feature doesnâ€™t really work
-lots of sticker application, Jokerâ€™s face hard to line up

VERDICT:
Buy it! Itâ€™s hard to find it at MSRP, but at $39.99 itâ€™s a must have for any fan of this line. Some recent playsets only feel recognizable due to the minifigs included, but this set goes above and beyond to make it uniquely Batman-themed. Fun play features, decent parts selection, and excellent minifigures. Get one if you can! You wonâ€™t regret it.

You can buy 6857 Dynamic Duo Funhouse Escape at LEGO Shop@Home.