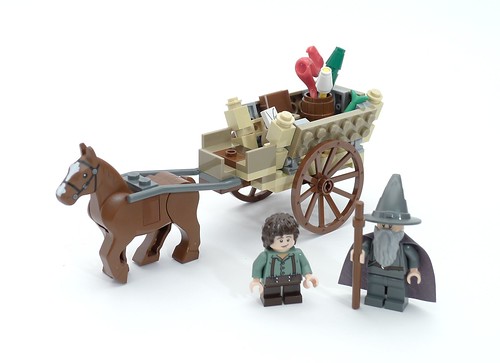 Here we are in 2012 and weâ€™re finally getting The Lord of the Ring LEGO sets. Can you imagine if these had been timely? Weâ€™d have yellow-headed Gandalfs, Aragorns, and Frodos. But they werenâ€™t and we donâ€™t and thanks to the upcoming The Hobbit film (Part 1, no less), LEGO fans and LotR fans can rejoice. We finally have our favorite characters immortalized in high-quality ABS plastic. So, what a better place to begin our not-so-new journey back into Middle Earth than with 9469 Gandalf Arrives, based on one of the earliest scenes from The Fellowship of the Ring, in which Gandalf arrives. 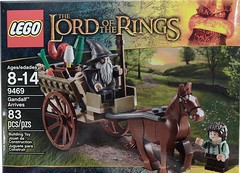 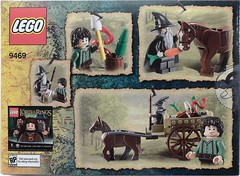 There really isnâ€™t a reason to take pictures of the front and back of the box. I do it for completeness sake. I usually have nothing of substance to say about the box, but in this case, I wanted to share that it was a pain to photograph. This box is glossy. 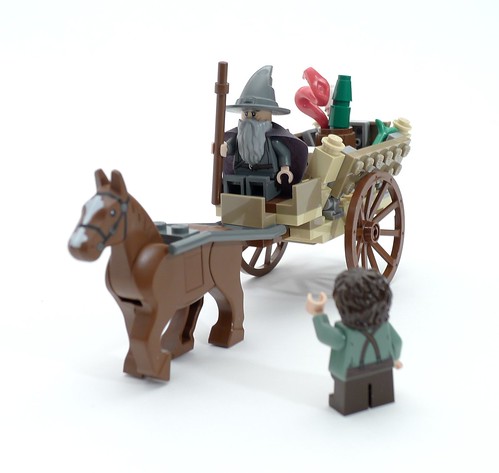 Itâ€™s not much for the MSRP of $12.99. Iâ€™m still, and probably will remain, miffed at LEGOâ€™s price hike on the small â€œbaseâ€ sets. I have yet to buy a $13 set that I can say gave me my moneyâ€™s worth. This set is no different. Sort of. There is one significant difference between this set and mostâ€”if not allâ€”other $13 sets. No conflict. This is a cart, a horse, and two hero characters. While some people might appreciate its authenticity of the moment, I canâ€™t see too many kids being engaged. 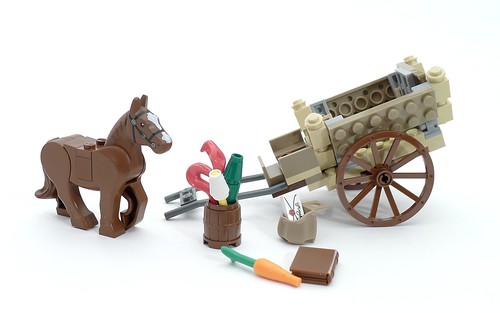 This isnâ€™t a set very many people are going to buy multiples of. Accessory-wise, thereâ€™s very, very little. I suppose if you want to stock up on horses, carts, and beards it might be up your alley, but other than that, itâ€™s a one-shot deal. 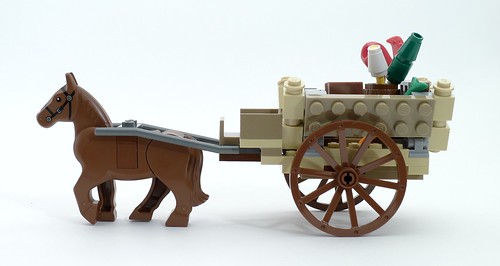 LEGO has produced a lot of carts over the years. This one manages to be different enough to warrant consideration, yet similar enough that you could easily adapt the cart for other themes, such as Castle/Kingdoms. Overall, itâ€™s a great LEGO cart, maybe not the greatest, but with its detailing and solid frame construction, Iâ€™d place it on the â€œTop Fiveâ€ list of LEGO carts. Just donâ€™t ask me what the other four are. 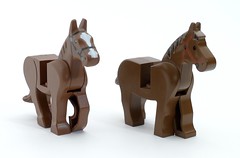 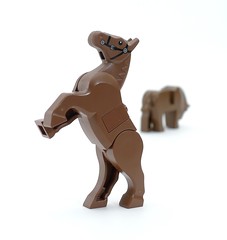 A cart is nothing without its horse and this is one spiffy horse. LEGO did an excellent job updating the horse without over-doing it. It matches the other newer animals perfectly. What makes this horse special, however, is its ability to rear up on its hind legs, as you already know. The legs â€œclickâ€ and hold in place. When the horse is back, itâ€™s very well balanced and will stay upright on flat surfaces.

Gandalf the Grey is a magnificent minifigure. Itâ€™s a good thing heâ€™s available in the smallest set, because it would be a shame to miss out on him. Iâ€™ve seen some debate over the minifigureâ€™s accuracy, that he should feature a bluish hat rather than the dark grey he comes with. Based on watching the film, grey looks suitable and it works for me, but you can decide if itâ€™s true to the character. I canâ€™t wait to see this beard in use on future minifigures. Much like the horse, itâ€™s a wonderful update of a classic piece (that is, if it is an update).

Frodo Bagginsâ€™ charm is in his simplicity. Itâ€™s amazing that in such few printed lines, LEGO captured Elijah Wood, particularly in the â€œconcernedâ€ expression. There is one glaring omission with the minifigure, however. No hobbit feet. It may not be worth complaining about, but it is a defining aspect of the Shirefolk. Iâ€™m sure LEGO could have gotten away with printing a few hairy toes on the stubby legs.

Pros:
+Gandalf. This minifigure nearly makes the set worth it and itâ€™s currently the only way to get the integral character.
+New horse. Itâ€™s a worthy upgrade.
+Versatile cart.
+Captures the brief scene exceptionally well.

Verdict:
Itâ€™s a charming, peaceful set that may turn off some kids who are interested in an action or conflict-oriented experience. It’s as superb rendition of Gandalfâ€™s initial appearance from the beginning of The Fellowship of the Ring and each element on its own is great: the cart, the horse, and the minifigures. But, at $13 itâ€™s a sparse set and difficult to justify paying full price for. Hold off and get it on sale or during a buy one get one, but do get it.