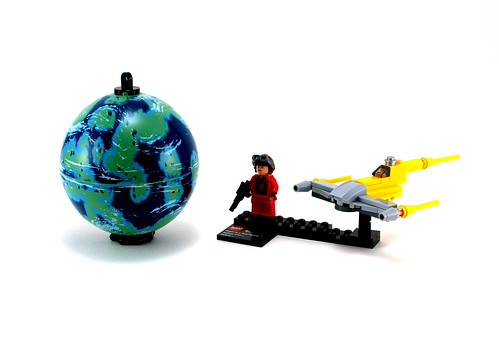 LEGO’s latest offering on the lower end of the pricing scale seemed to produce some strong feelings from folks on either side of the fence. From what I’ve personally seen they seem to be selling quite well so perhaps they’re the kind of sets that appeal to the youthful target demographic only. Does the unholy marriage of a Star Wars themed X-Pod with a minifigure thrown in for good measure work and if so, who is it really aimed at? 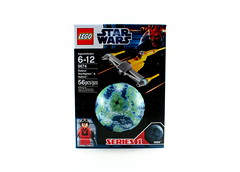 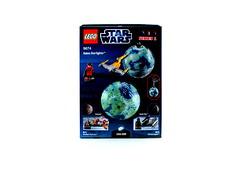 Personally, I love the concept. I’m a big fan of mini builds and have fond memories of the first bunch of Star Wars minis that came out before the polybag trend nearly a decade ago. This first offering has the advantage of being the only ship in the first three Planet minis that has not previously been produced as suprising as that is, but the disadvantage of being first and thus getting all the generic flack/praise for the line in general that I can throw at it so let’s take a closer look at this new breed of set starting with the packaging. I won’t deny it’s eyecatching, however it’s annoying for being simultaneously needlessly big for the set inside while not managing to actually cover the contents. I’m sure the point of having the planet protrude on either side like it does is to give kids a good look at what they’re getting, but it does nothing to protect the orbs printing while it rattles around on the store shelves. I managed to get mine quickly so there was little to no shelf wear, but this may be the worst packaging job LEGO has ever done. 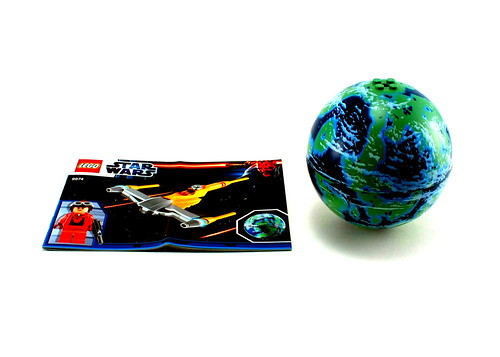 Inside the box is, well nothing. The ball sits tightly in the middle of the two holes and the only other thing in the box is the small instruction book. I would have liked to see a small cube box just big enough to fit the planet snugly with all its contents tucked safely inside as this would protect the set and definitely make it easier to stuff a case full of these, maximizing space. Unfortunately the “curb appeal” equivalent of shelf facing won out once again, furthering the mindset that where packaging is concerned, size matters. 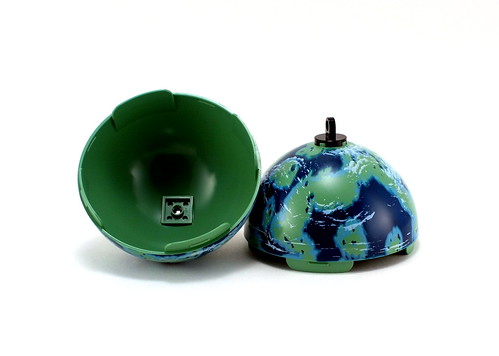 The real star of these sets is the new planet part itself and I say part because if you haven’t noticed already there’s only one new piece used twice to create the sphere. The printing on this planet is acceptable and the general look of Naboo is captured in LEGO’s usual cartoonish style, but the printing on this one suffers the most from mirrored effect. The fact that this planet is actually coloured sand green makes me wish I could get a hold of a couple before they were printed to use as architectural domes, but that’s not going to happen. The planet also suffers from the two halves being studs out though again I know this stems from the attemp to keep the cost lower for the production of this new theme. I’d still rather see the other half with holes on the outside even if it had to be the same printing which I hope won’t always be the case. One of the main reasons I really liked this concept when it first appeared is I’m hopeful they’ll use this part to make an Earth and give it a really nice printing for some NASA, Earth Day or other promotional set. 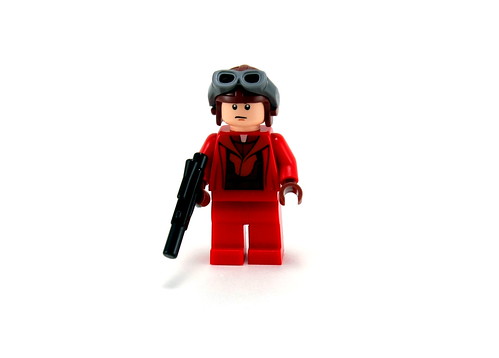 Moving on the the minifig, this one is a bit bland overall, but that doesn’t mean it isn’t useful. For one thing this Naboo pilot has only been in one other set which wasn’t widely available and cost $50 if you could get it, so this is a less expensive way to increase your Naboo space force. It’s still a nice figure and the face while generic adds an air of slight disgust/extreme indifference. Also, it’s dark red if you’re into that kind of thing. Which, I am. 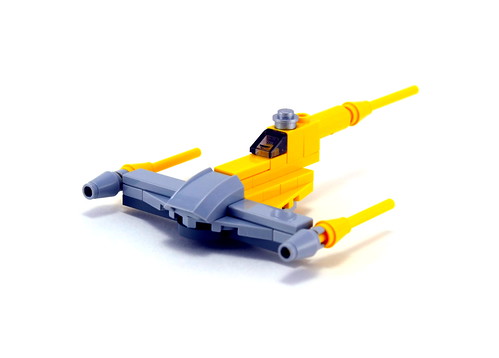 On to the actual build, overall this is a nice little version of what is arguably the most iconic ship from TPM. If I was forced to bitch and moan about some tiny details (no need to twist my arm, I’m happy to do it!) I can see a couple of small issues that could be easy to fix. 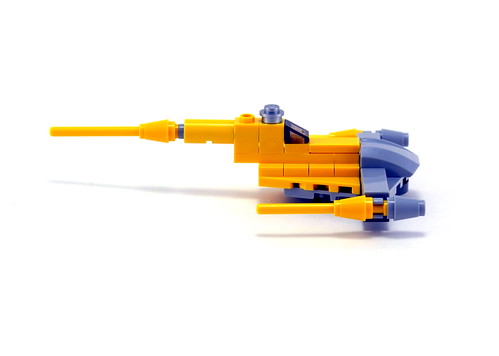 When you look at the profile you can see that there are a couple of spots where the colouring is needlessly broken up. On the front engines they used this: 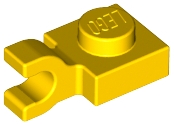 When they should have used This: 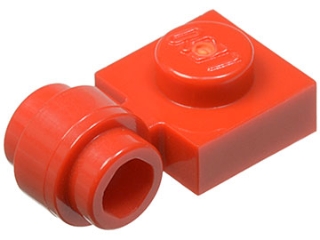 As it would have made the transition less jarring and been an easy fix, requiring a simple switch out with no addditional parts. Secondly, the tail seems a tad too long to me and if you switch the yellow Technic connector for a 1×1 round brick you could elimininate the grey stripe and give the tail a more even flow. Lastly, the front completely ignores the transition from grey/silver to yellow that is prominent on the wings. I understand that the size of the model makes this difficult, but it wouldn’t be the first time LEGO put a little printing on a tile to add some detail and they seemed to have forgotten that along the way. One small yellow stripe down the edge of the grey tile would really pop and this isn’t a $4 polybag it’s a new $10-12 line they want to be successful, but it’s still easy enough to forgive on such a small model. 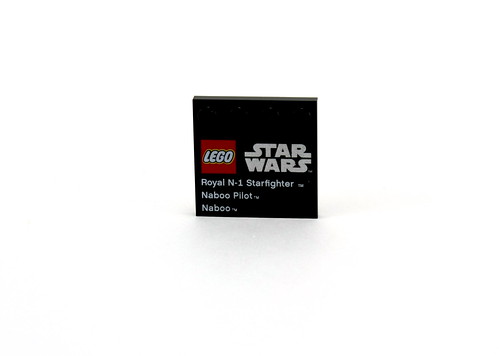 The last part of the build is a stand, Finally! This just goes to show how simple it would be to throw 3-4 extra pieces into most of the mini builds letting the builder display the model nicely, right out of the bag. The one really great feature of the stand is the printed tile included to display the set info. Now would one tiny extra printed tile have been so difficult? I don’t think so… 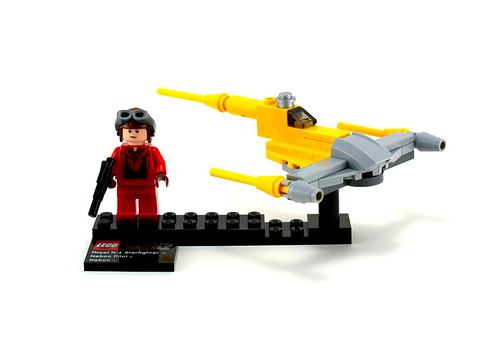 If you like mini sets, buy it. If you like minifigures and appreciate the opportunity to get rare ones cheaply, buy it. The price point is right and the Planet is a nifty part. With the upcoming spend X amount and get ____ free deals, it’s an easy way to bump up your total a few bucks. If none of those things interest you then you’ve already made up your mind and I’m surprised you made it all the way to this point in the review. Final word, it’s the weakest of the first three planets sets and I still like it. 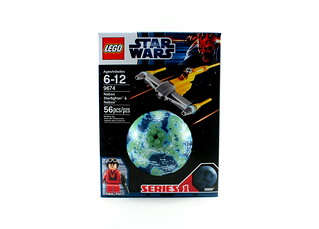