Oh Toys R Us and their exclusives… 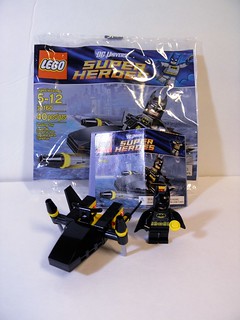 30160 Batman Jetski is the first of what will hopefully be many Super Heroes polybags. The best parts of the DC and Marvel lines are the minifigures, so a cheap way to get them is always welcomed. It’s not as cheap as it could be, thanks to Toys R Us, but it’s a start. 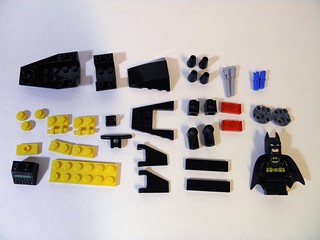 As usual for polybag sets, there isn’t much going on here. The Batman minifig is the star here. It’s the exact same black-suit version from 6863Â Batwing Battle Over Gotham City and 6864 The Batmobile and the Two-Face Chase, but those are $34.99 and $49.99 respectively.$4.99 isn’t too bad for just the minifigure, especially after several years of Batman costing a lot on Bricklink. The jetski just adds a little playability. There’s only one spare piece; a single 1×1 yellow round plate. Batman doesn’t get any accessories either. Come on, LEGO. Give him at least a Batarang! Or some Bat shark repellent. 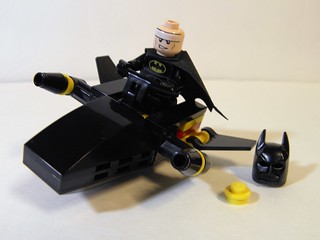 So yeah, the jetski. Well, it resembles a jetski, so mission accomplished. It’s a simple build and basically works for what it is. It’s got Batman’s color scheme of black with yellow highlights. That, plus the flick-fire missiles and fins make this clearly Batman’s jetski, as goofy as it is.

Of course, I have a few problems with it. First, the fins get in the way of the flick-fire, but those rarely work anyway. Second, the jetski has no motor. How does it go? Third, the jetski rests on two bley “boat stud” plates, making it impossible to balance straight. Not an issue if it’s in the water, but this thing can’t float. I’ll forgive it because it looks like Batman’s always going for a sharp turn when you rest it on the shelf. Very action-y. Turn Batman’s face to the smirk and he looks like he’s having a grand olde time.

-A (fairly) cheap way to get Batman

-The jetski serves its purpose, has good parts like the computer monitor.

-No accessories for Batman? Come on.

-Expensive for what you get (Toys R Us exclusive.)

-Jetski design is passable at best.

Verdict:
Buy it. It’s a great little impulse set, even for $4.99 USD. It’s Batman! And he’s riding a jetski! Why wouldn’t you buy it? Unless you already have this Batman from other sets. Or you don’t like Batman. Otherwise, there’s no reason not to get one. 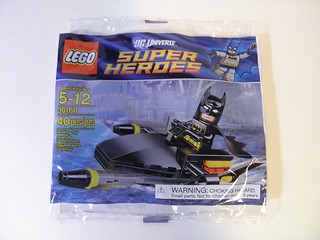