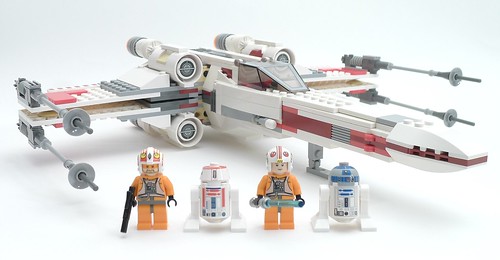 Get ready to lock your s-foils in attack position all over again. It hasnâ€™t been long since LEGO discontinued the last version of the classic starfighter, 6212. That version, originating as the 4502 X-wing Fighter, has been around since 2004, winning the non-existent award for LEGO set longevity. With the anticipated introduction of the 9493 X-wing Starfighter in January 2012, there havenâ€™t been any extended periods since 1999 that some form of X-wing hasnâ€™t been available. Can this new version match the staying power of its predecessor or will it fade away in two years, only to be forgotten until itâ€™s ultimately remade yet again?

That question can be answered by how well 9493 defines itself. 6216 defined itself by being adaptable. It was a set that crossed the entire original Star Wars trilogy. It wasnâ€™t just Lukeâ€™s X-wing. While LEGO gives people unprecedented control over the way they can engage with the toy, in this instance the builder was given even more immediate choices. 4502 was adaptable, too, but to a lesser extent. In both cases, these sets allowed the builder to recreate a range of scenes from the films out of the box. Price is also a factor. The first X-wing (7140) was a $29.99, the second (4502), $49.99, and now the third, $59.99 (CA$74.99, Â£49.99, â‚¬69.99). In other words, itâ€™s more expensive and potentially less accessible, which means 9493 has more to prove.

A brief note on the box: I mentioned in the 9432 TIE Fighter review it was packaged in a large box for the contents. Itâ€™s the same case with the X-wing. Iâ€™m not going to make a big deal about it here, since itâ€™s redundant. What Iâ€™m going to say is perceptions need to change. If box sizes donâ€™t change, become smaller and more appropriate for the contents, then their size relative to their price becomes ingrained into the consumersâ€™ consciousness (arguably, this has already occurred). Shrink the boxes and over time, consumers will adapt. I know itâ€™s more complicated than this, controlling retail shelf space in the toy aisle is also a factor (the bigger your boxes, the less room there is for the competitorâ€™s boxes and grabbing consumer attention), but itâ€™s a major aspect in marketing this particular product. 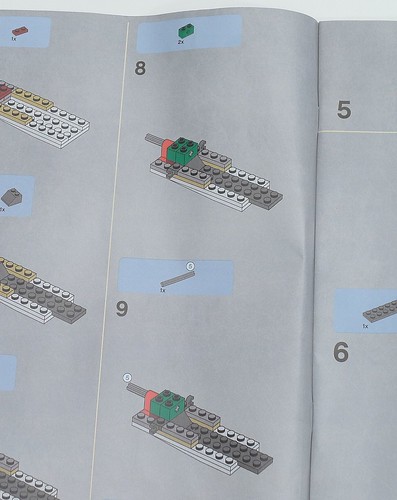 Something I didnâ€™t mention in the TIE Fighter review was the coloring in the instructions. In the past quality of the color, the ability to differentiate colors such as black and grey, has been an issue. The instructions in these newer sets represents the first time I didnâ€™t have to pause at all and study the instructions to be sure what color I was looking at. Also, I thought Iâ€™d take this opportunity to point out another minor error (step repetition). 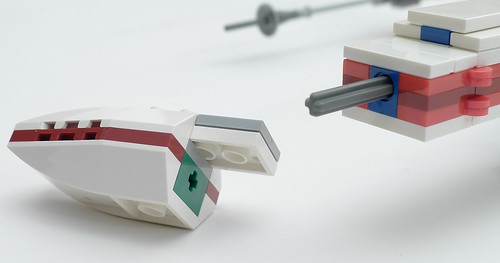 Since 1999, LEGO Star Wars has evolved in the way the sets use inappropriately colored parts, usually blue, yellow, or red. Over the years these colors became either concealed better or substituted for less out-of-place colors. 9493 is a set that harkens back to the early years of the theme with its liberal use of colorful elements and not necessarily in a bad way. Most of the vibrant pieces are well concealedâ€”green, blue, and yellowâ€”but like 4502/6212, red is overused and not welcome. Donâ€™t get me wrong, in the correct places itâ€™s fine and thank the makers, 9493 is not the horrific red blotchy mess 4502 was.

What is welcome is the dark red. Technically, itâ€™s less accurate than regular red (as far as I can tell by watching the films), but LEGO red has always looked to clean, bright, and cheerful. The dark red fixes this, but ends up creating another problem. It doesnâ€™t mix well the bright red. It would have been better to pick a hue and go with it throughout. 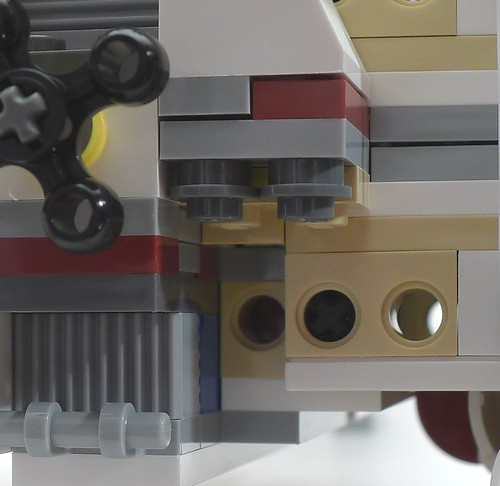 The build was more fascinating than I wouldâ€™ve imagined. By now youâ€™ve seen the slopes forming the hexagonal shape toward the rear of the model. Before I built the X-wing, I thought they were new inverted slopes. Nope, theyâ€™re just upside down. Points to LEGO for surprising me. I canâ€™t recall if Iâ€™ve ever seen this technique used in an official LEGO set and I always enjoy seeing LEGO incorporating unconventional SNOT into their products.

What I donâ€™t enjoy quite as much is the Technic, or rather the exposed Technic. I understand itâ€™s required for the s-foil mechanism to function, but itâ€™s visually distracting, bulky, and disrupts the flow of the starfighter, inhibiting a sleek fuselage. Thankfully, the mechanism has been refined since 2006 and isnâ€™t the aesthetic nightmare of 4502/6212. 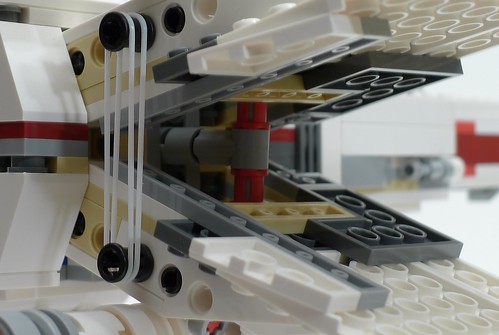 If youâ€™ve handled any of the previous X-wings or ARC-170s using an s-foil mechanism, then you know it can take a quite a few turns to put the ship into attack mode. Not so here. One short turn and the wings pop into attack mode. The trade-off is that â€œpop.â€ It isnâ€™t as smooth a transition like the older models, but Iâ€™ll take the speed over â€œturn, turn, turn.â€ Due to the tension imparted by the rubber bands, the wings tend to snap closed when returning to normal flight mode. It might be a little startling for a younger child and may result in pinched fingers (Iâ€™m speaking from experience). 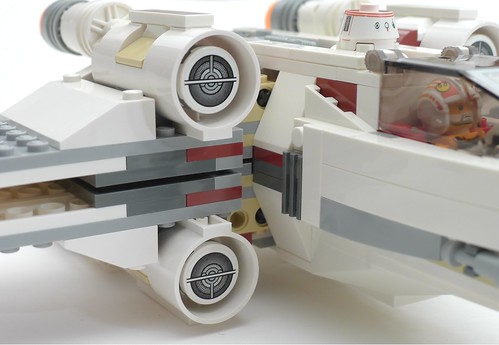 The continued, unfortunate side-effect of the Technic mechanism, besides the bulk, is the placement of the engines. As you can see, theyâ€™re still positioned incorrectly with way too much space between the top and bottom sets.

The engines do get a makeover, however, and individually are much, much better than the last version, from the intakes to the thrusters (they are still undersized, of course). The stickers representing the intakes shouldâ€™ve been printed. In general, stickers arenâ€™t a burden, but on pieces like the round tiles I find them a pain to align properly. LEGO printed the round tiles for the 9492 TIE Fighter, why not here?

While the Technic components offer a fun play-feature in the moving s-foils, Iâ€™m in the camp preferring accuracy. Iâ€™d take click-hinges, ala 7140, with a sleeker fuselage and accurately placed engines over whatâ€™s here. The beauty of LEGO, though, is we can build our own custom X-wings, as many have, with astounding results. 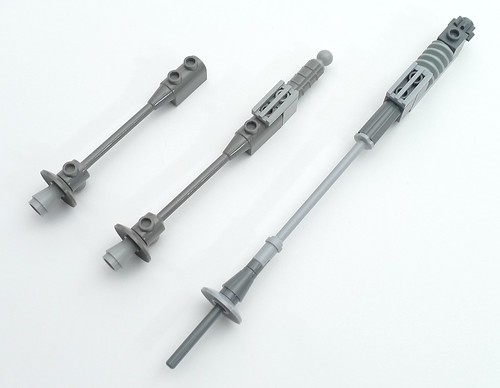 Also getting a makeover: the laser cannons. Not only are they much closer to the correct size for the scale, their overall shape is hugely improved. No more dinky, pathetic laser cannons for us! 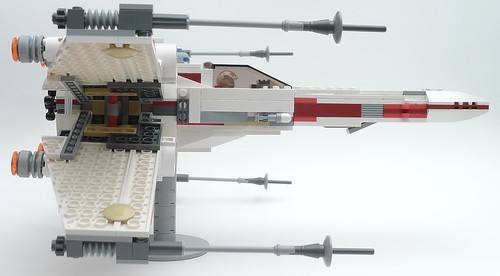 The less noticeable makeover is the fuselage. It’s better proportioned, not as long and narrow toward the front, and the cockpit is centered better. It’s much more pleasing to look at than before, but from the side it looks way too flat. 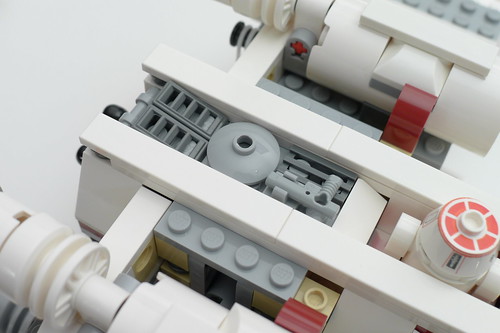 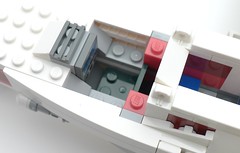 I hope youâ€™re not the type of person who chooses LEGO sets based on the amount of interior cargo space a set has. If you are, this set isnâ€™t for you. It takes a step backwards in its design from both 7140 and 4502 (and note, the classic targeting display piece has been replaced. A moment of silence, please). Those sets had considerable cargo space to store lightsabers, helmets, and megaphones. 9493 only has a miniscule space behind the pilotâ€™s seat. Yes, you can fit the included accessories (lightsaber hilt, blade, and blaster), just make sure youâ€™ve place the droid in first.

Iâ€™ve always thought LEGO stocked each X-wing with a great selection of figures. The Rebel mechanic, Biggs, Yoda, and Wedge (eh, I liked his helmet). 9493 introduces Jek Porkins and R5-D8, who are exclusive to the set and join Luke Skywalker and R2-D2. I believe up until now, this is the first appearance of this pilot Luke outside of the 8129 AT-AT Walker. 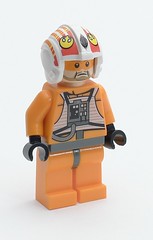 Points off for not including a turkey leg for Porkinsâ€™ to munch on before his (spoiler) untimely demise. Points back for including another cool printed helmet, well, two.

Itâ€™s a shame the white printing on 9493â€™s flight suits has some of the worst bleed-through from orange torsos Iâ€™ve seen. Iâ€™m not sure what can be done about it other than adding an extra layer of grey or white to help neutralize the orange. This may vary from set to set. 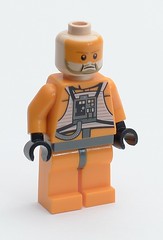 On the subject of printing, neither minifigure features a double-sided head. This is especially disappointing in Porkinsâ€™ case. He has unique facial features (great beard, pudginess), which would shine without the orange visor. Instead his usefulness is limited. Given how prevalent double-side heads have become, itâ€™s puzzling. Lukeâ€™s less of an issue, but I know his helmet had an orange visor in the films.

Since weâ€™ve been given a choice of pilots continuing the trend of 7402 and 6212, LEGO made sure to include the â€œRedâ€ markings to give the builder options. When Lukeâ€™s the pilot, you can adjust to â€œRed 5.â€ When Porkinsâ€™ in the seat of fate, put on the extra tile (all stickered tiles, by the way) and â€œRed 6â€ can be standing by. Or you could defy the box and go out as â€œRed 1.â€ 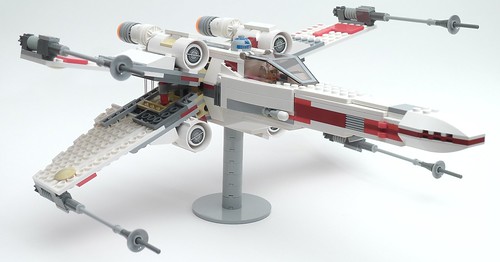 Pros:
+Itâ€™s better than the previous X-wing. Better proportions, shape, and color. Butâ€¦(See Con #1).
+Offers a choice of pilots and droids. Choose Luke and R2 and save the galaxy or choose Porkins and R5 and â€œhave a problem here.â€
+New, improved Technic mechanism quickly opens s-foils and takes up less space that previous X-wing allowing for a slightly sleeker look.
+Varied build, designed to be accessible to a large range of fans, both experienced and inexperienced with LEGO.
+No flick-fire missiles.

Cons:
-Itâ€™s only an incremental improvement over the previous X-wing (6212), not a leap forward like other sets, such as 7658 Y-wing Fighter or 9492 TIE Fighter.
-Lots of exposed Technic. Unavoidable, but unsightly.
-Stickers on round tiles. Younger fans may need assistance aligning them (older fans may need patience).

Verdict:
After spending time with the 9493 X-wing Starfighter, swooshing it around and popping open the s-foils, it feels like an attempt to create the definitive LEGO X-wing. Itâ€™s designed to be accessible to consumers in the way itâ€™s constructed and how it can be interacted with. Like the X-wings before, it offers builders choices and thatâ€™s always a win. Itâ€™s a fun and solid set, but by being accessible, it makes several compromises. It takes many design cues from the 4502 X-wingâ€”though with refinementâ€”and by doing so recreates many of those shortcomings.

Because of that, it doesnâ€™t feel like it offers something more than the last X-wing, especially for the extra cost, other than a facelift. It does have more pieces (437 vs. 560), but some of those pieces seem unnecessary (see this pic). It certainly doesnâ€™t offer more than 4502 X-wing (3 fewer pieces, no Yodaâ€™s hut). If you donâ€™t yet have a LEGO X-wing, yes, your collection needs an obligatory X-wing, but there really isnâ€™t a compelling reason to jump on this set right away. Wait, get it on sale and youâ€™ll be satisfied. In the end, this seem like another draft in the quest toward the (official) ultimate LEGO X-wing.