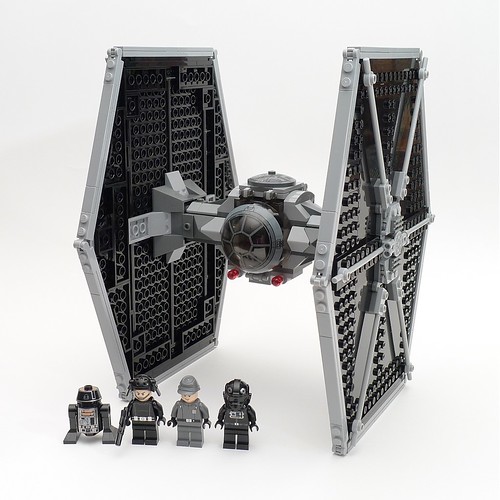 If youâ€™ve been collecting LEGO Star Wars since 1999 with any seriousness and/or obsessiveness, then thereâ€™s a good chance you have too many TIE Fighters. Iâ€™m not saying thatâ€™s a bad thing, well, at least not from a certain point of view. You may say to yourself, â€œNo more, please, Iâ€™m stuffed. I donâ€™t have the room.â€ I donâ€™t blame you. Itâ€™s only been a couple of years since the last TIE Fighter, the TIE Defender, sat on store shelves (and in some cases, may still), but weâ€™re going on about 7 years since the last honest-to-goodness TIE Fighter, the signature fighter of the Imperial Navy and perhaps one of the most iconic Star Wars starfighters second only to the X-wing. You may be stuffed, you may have no room, but 9492 TIE Fighter may very well be a set you loosen your belt for. 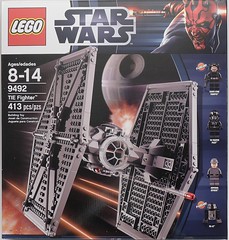 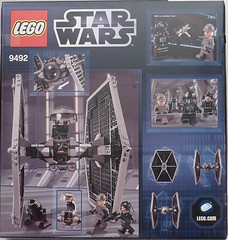 Ok, enough metaphor. Donâ€™t eat your LEGO, kids. You can eat the box if you like though, since, as many people have pointed out, itâ€™s big enough to feed a family of 4. There is no logical reason for a box this huge. It may convey on a psychological level to consumers that the contents may be worth the MSRP of $54.99 (or CA$69.99, Â£49.99, â‚¬49.99). It may help illustrate to those of us who have too many TIE Fighters that this is bigger and better than the last version, which retailed for $19.99. Maybe LEGO wanted to show consumers the TIE Fighterâ€™s actual size on the box. Itâ€™s very close. Itâ€™s also very unnecessary. 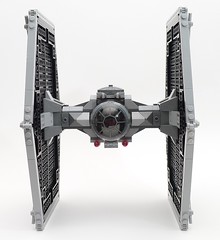 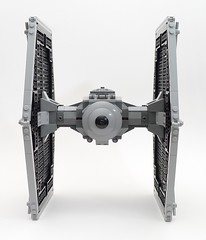 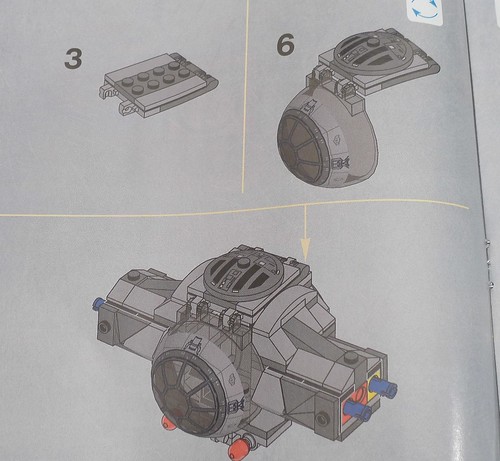 Well, letâ€™s back up for a second before we take this out of the hanger bay. Before any sort of swooshing commences, they, you, or anyone, are not going to follow the directions on page 18. Doing so would absolutely tarnish theirs, or your, reputation in the community. Iâ€™m sure this has been caught by now and will be fixed in future copies down the line, but it through me off when I found. I questioned my knowledge of the TIE Fighter. I had to look it up to confirm my suspicions. I could have looked on the box, but who was I supposed to trust? 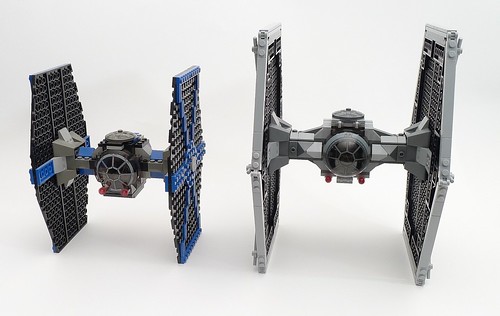 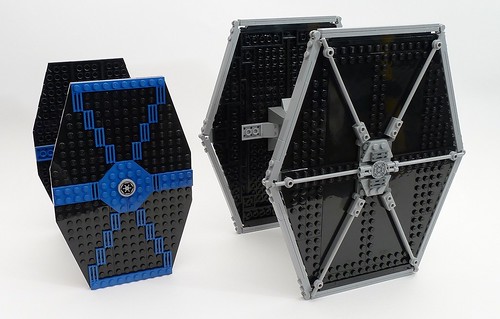 Outside of that one little bump in the road, this set has a lot going for it. For one, as youâ€™ve probably noticed, itâ€™s one good looking hunk of plastic. In terms of remakes and rehashes, 7658 Y-wing Fighter has been one of the gold standards in the sheer contrast between original and remake. 9492 comes very close to setting a new standard. Itâ€™s almost something youâ€™d find on a talented builderâ€™s Flickr or MOCpage. 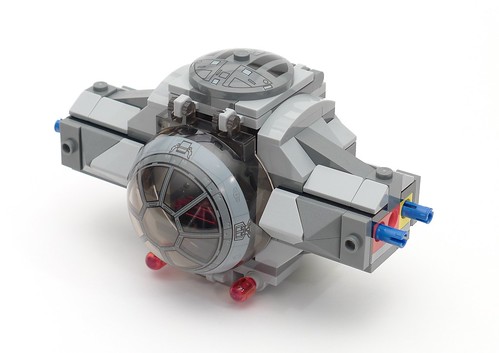 Almost. Itâ€™s most glaring shortcoming is in the â€œballâ€ cockpit. Itâ€™s better than all of the previous versionsâ€™ cockpits, but it doesnâ€™t quite advance itself enough to be significantly better. The biggest change is obviously the canopy, which finally ditches the cumbersome old mold in favor of a dome. This helps shape the â€œballâ€ better than the previous piece, but the construction around it flat out looks awkward. From a distance, itâ€™s hard to notice this awkwardness, but get close and the slopes are out of place. 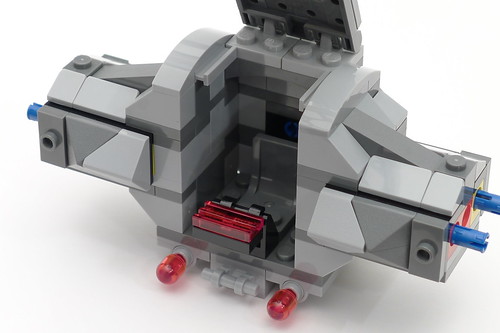 And what’s the deal with these red grille “control panels?” There are multiple sets that use the grilles in this manner and I don’t get it. Put in the printed control panels, LEGO. Everyone loves those. 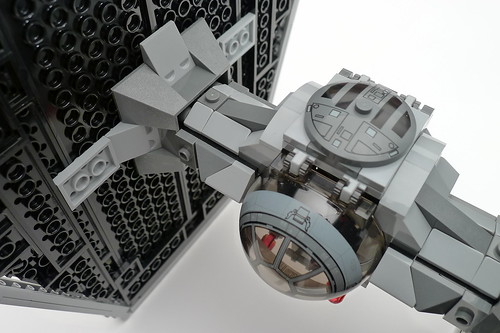 This awkwardness extends to the pylons connecting the body to the wings. As a result, they look bulky. Itâ€™s not terrible by any means and it does allow for significant support for the wings, but aesthetically it takes away from the overall model. 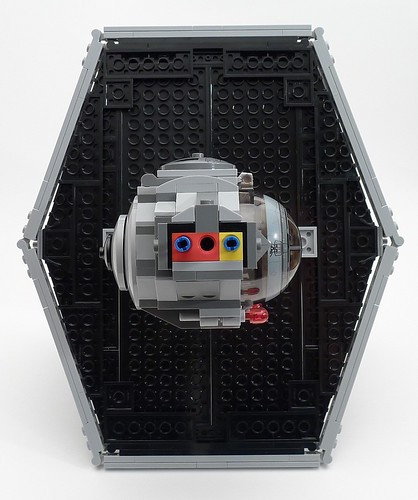 I can understand the dilemma, though. With greater accuracy generally comes more pieces and more pieces comes more cost for the consumer. Iâ€™ll give the designer(s) credit. At least they tried on this one and weâ€™re finally past the days of what passed for ball cockpits on the previous iterations. 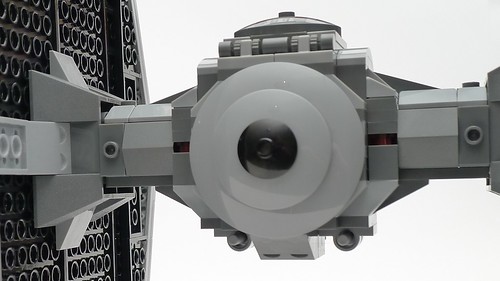 The other shortcoming, which is much less noticeable, are the â€œTwin Ion Enginesâ€ in the rear. Theyâ€™re basically the same as before, only positioned better. I wasnâ€™t a fan of them then, and Iâ€™m not now. I know the engines are supposed to be tiny, but this would have been the perfect opportunity to use some of those new round tiles (facing outward, rather than integrated). This is an easy fix, but more accurate engines should have been there from the beginning. If youâ€™re going to put in the effort for accuracy, why not? 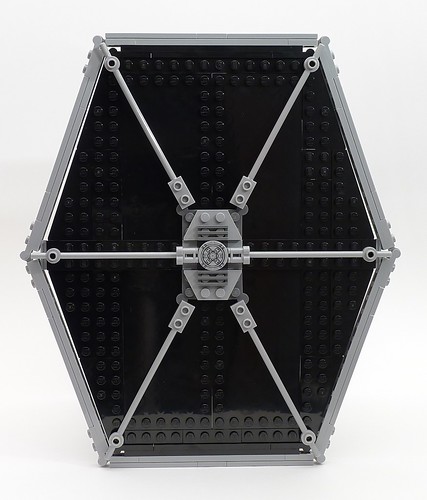 The highlight of this model is undoubtedly the wings and deservedly so. They were a repetitive, yet quick build, but they come out looking fantastic. For one, they arenâ€™t wobbly, and two, the grey border is makes this model pop. They certainly take cues from fan builders and itâ€™s about time. They may need further reinforcement, however. Some of the large black plates arenâ€™t as secure as they should be and during play there is a good chance they may pop out. Itâ€™s another easy fix, but a potential concern nevertheless. What isn’t an easy fix is the gap you see between the grey and the black. I don’t believe there is much that can be done about it. It’s unsightly, but only visible when at the angle the picture was taken. 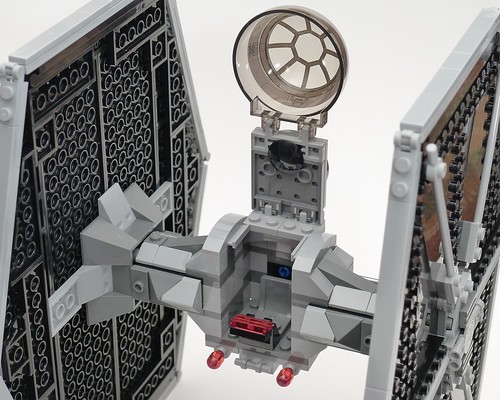 On a side note, Iâ€™m hoping LEGO has more TIEs in development that match this style. Weâ€™re about due for a TIE Bomber, arenâ€™t we? And another TIE Interceptor? Yes, I think we are and if they manage to look this good, Iâ€™ll be very willing to gorge myself. 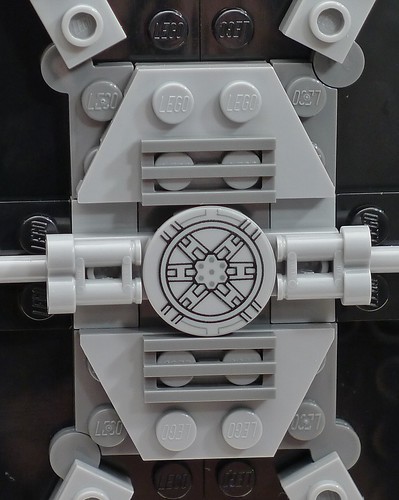 And look, LEGO was kind enough to print this round tile. Why couldnâ€™t you have done the same on the 9493 X-wing Starfighter as well, huh?

Complementing the TIE Fighter are 4 minifigures, two of which are unique to this set. There wasnâ€™t any reason to include any minifigures other than the TIE pilot, but Iâ€™m not complaining. These minifigures are wonderful. If youâ€™re someone who bases their LEGO Star Wars purchases on the minifigures (Iâ€™m not judging), this set doesnâ€™t disappoint.

R5-J2 debuts the new R5 dome mold in black and the Death Star Trooper debuts a new helmet mold (which doubles as a colander for when he needs to rinse vegetables). The Death Star Trooper also sports a double-sided head for those sunny days. The other two figures are your standard issue officers. Note the TIE pilot has the same printed face as those found on the stormtroopers from this product wave. 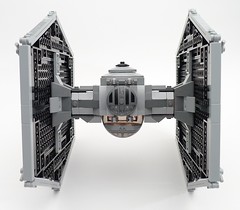 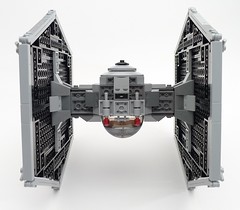 Cons:
-On the expensive side, at about 13 cents per piece. Ultimately doesnâ€™t feel like a $55 set. It is more substantial than the overpriced 8087 TIE Defender, however.
-Though improved, the â€œballâ€ cockpit still doesnâ€™t quite capture the accurate TIE look.
-If played with, the large black plates making up the interior of the wings may need additional reinforcement.
-Overly large box. Not a detriment to the set, simply wasteful and unnecessary.

Verdict:
If the opening paragraph of this review doesnâ€™t apply to you and you donâ€™t have many or any LEGO TIE Fighters, this is one set you donâ€™t want to pass up. If you already do, well, itâ€™s time to make room. Itâ€™s worth it to do a little looking and find it under MSRP, which, in my experience was a simple task. 9492 TIE Fighter puts all TIE Fighters before it to shame, and that includes the variants, such as Darth Vaderâ€™s TIE Fighter and the TIE Defender. This is the definitive LEGO TIE Fighter and deserving of being in any collection, big, small, or not yet in existence.