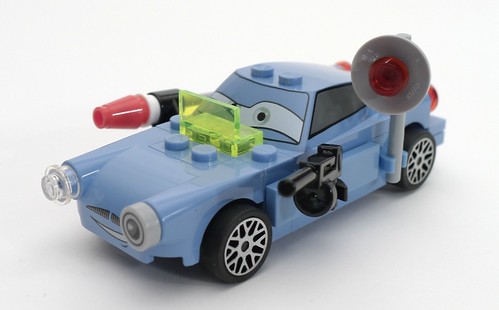 I have a confession. I have yet to be compelled to watch Cars 2. You might ask yourself, â€œWhy then, did you, Mr. Reviewer, buy a Cars 2 LEGO set?â€ I chose this set because of its tangential relationship so another series of films I have seen many, many times. James Bond. Yes, I bought 9480 Finn McMissile on the sole fact the character was based on the Aston Martin DB5. And LEGOâ€™s effort kind of resembles it. 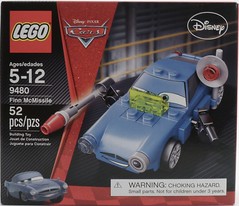 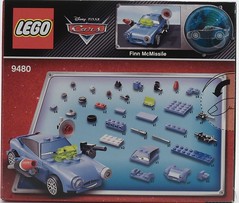 Okay, maybe Iâ€™m reaching a bit to say 9480 “kind of” resembles it, but this is as physically close as weâ€™re going to get with this scale and part selection. With 9480 Finn McMissile you get 52 pieces for $6.99. Not great, not terrible. Itâ€™s a fairly cheap source of medium blue parts, though that diminishes when you consider a bulk of the car is made of less than five pieces. I should also note a disappointing error on the back of the box. What looks like a 2×4 tile in medium blue does not exist in this set. Itâ€™s just regular old blue. 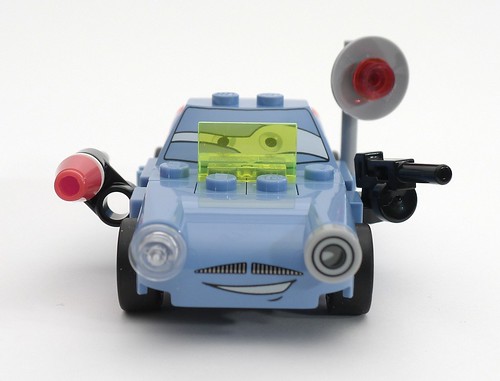 Itâ€™s a straightforward build. You get what you see, essentially. The eye and mouth printingâ€”as far as I can tellâ€”are exclusive to this set. Iâ€™m not sure what Finnâ€™s eyes are doing. Concentrating? Scoping out a target? Seizing? 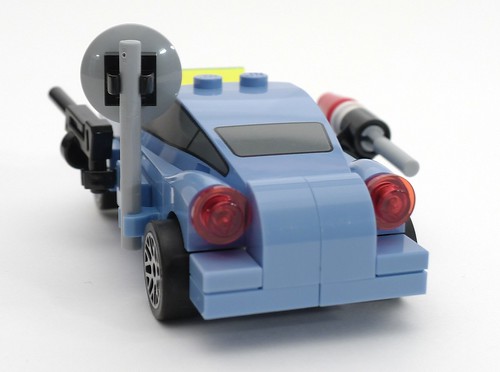 Finn’s boot is the poorest designed area of the set. The taillights end to soon and in doing so disrupt the flow of the car, which, even with the array of gadgetry flowed remarkably well, due in part to those bulky pieces.

Also, does anyone know what the deal is with these headlights? Itâ€™s cool to get the new 1×1 round tile, but this looks awkward with the two different pieces. Apparently both of the 2012 sets he appears in are like this. Luckily the set includes enough extra pieces to create a little more symmetry. 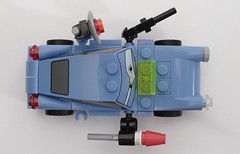 He comes with an assortment of gadgets: a machine gun, a radar dish, a heads-up display, and, of course, a missile (a McMissile?). As a flick-fire missile it works as well as expected with a range of a few inches or so. The problem with the gadgets, however, is their points of attachment. Remove the gadgets and you can see the results for yourself in the pics. He cut himself shaving.

Pros:
+Exclusive eye and mouth printing.
+Weapons for car on car carnage.
+Cheapest way to get Finn, unless you want all the Finns (he appears in five sets).
+Sort of resembles an Aston Martin. I guess itâ€™s the closest weâ€™ll get to LEGO James Bond.

Cons:
-No extra pieces included to alter his appearance to â€œnormal.â€ Not that I would expect it, but two additional tiles isnâ€™t much to ask for.
-Sand blue wouldâ€™ve been a more accurate color than medium blue.

Verdict:
This little car has a lot more going for it than I expected and doesn’t look as cheesy at first glance with his gadgets. If youâ€™re into the Cars films or LEGOâ€™s offerings, this is a fun and worthwhile set to pick up.