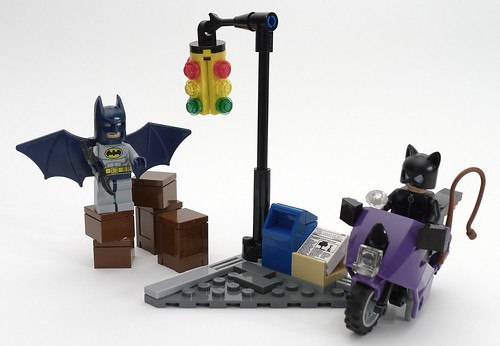 Do you remember back in 2006 when this set was known as 7779 The Batman Dragster: Catwoman Pursuit? Stop. Donâ€™t answer that. Itâ€™s a trick question. This set is not 7779. It canâ€™t be. Thereâ€™s no dragster. No, instead, 6858 Catwoman Catcycle City Chase (say that five times fast) comes with a traffic light and three fewer pieces. And a $12.99 price tag. I wanted to like this set. I thought it would fill the hole in my brick-loving heart left by missing out on 7779. I thought wrong. 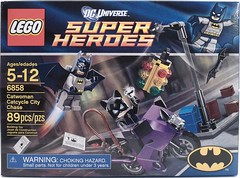 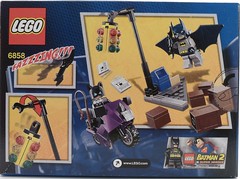 Excuse my over-dramatic opening paragraph. I suppose when most of the sets in the initial DC Universe Super Heroes sets are mediocre remakes, I shouldnâ€™t have gotten my hopes up. Not to say I was hoping a retread of 7779, which I didn’t think was all that great to begin with. I admit, I was mostly interested in the minifigures. 6858 contains roughly as many pieces (89) as a Star Wars battlepack, yet contains half as many figures. Where is the substance? 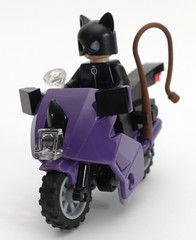 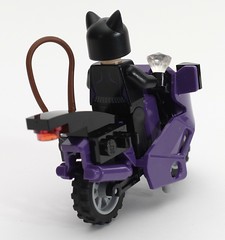 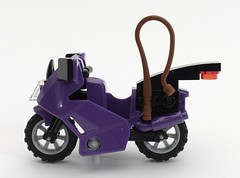 Is it Catwoman with her purple motorcycle (er, catcycle)? It looks similar to 7779’s catcycle, though with a notable improvement. Itâ€™s slightly more cat-like, sleeker, with a curved slope representing a tale and thatâ€™s about it. The bike is still made up of a few bulky pieces. Catwoman’s whipâ€™s also been updated to the new style, which would’ve been better in black to match the motif. Catwoman herself has been slightly updated as well. I dig the purple lipstick. Mee-ow. 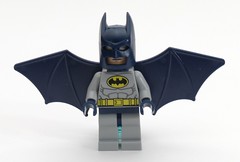 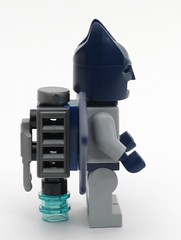 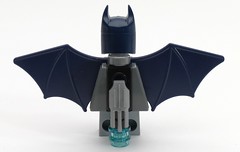 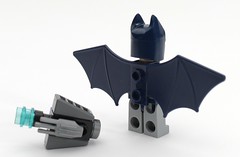 Is it Batman with his jet pack (or bat pack)? Itâ€™s cool, looks neat, designed not to fall over, and may be the best part of the set until you realize that if you take it off Batman has no cape. Really. Also, Iâ€™m beginning to suspect Batman may be daylighting as Superman, or it might be the other way around. Weâ€™re getting into dangerously confusing territory here. Is it so much to ask for better differentiation in the faces of these prominent Super Heroes? 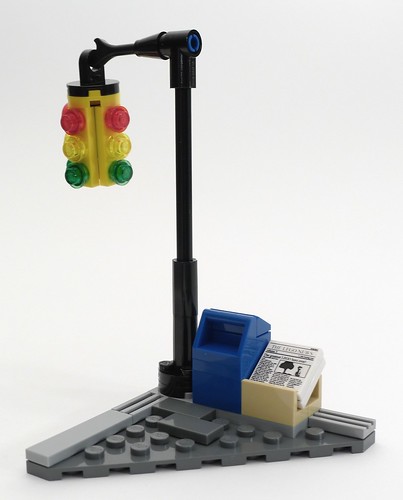 Is it the traffic light? It’s not a bad traffic light at a glance. It features one of the set’s signature play features, the “falling” light. Too bad it’s not complete unless this is a three way street. And what is that blue thing supposed to be? A mail box? A recycling bin? You can’t put anything into it. There is no clear answer and my imagination hurts. 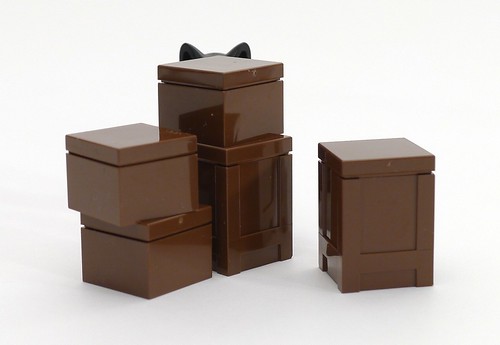 Is it boxes? I guess Iâ€™m supposed to crash Catwoman into them and then throw newspapers at her. Bad kitty. I would have rather had new dragster or a bat pod. 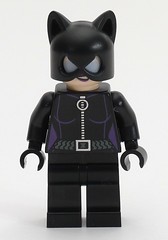 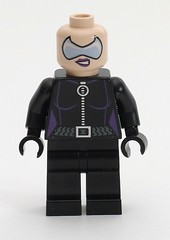 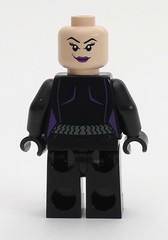 Pros:
+Another opportunity to get Catwoman for those who missed out the first time around. She’s even better the second time around.
+Blue-cowled Batman and his batwings and jet pack. Heâ€™s highly swooshable, though arguably less swooshable than Superman.
+Varied part selection, surprisingly so for a small set. 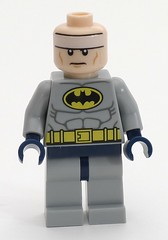 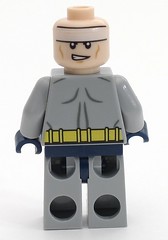 Cons:
-The set lacks substance and tries to make up for it with filler. Boxes, a blue thing, and an
-Incomplete traffic light. Yes, LEGO, you could have included four more pieces to complete the stoplight (this is admittedly a very easy at home fix).
-No cape. This is unforgivable. Batman already looks ridiculous with his enormous cowl, which the cape helps to offset. Without it he looks doubly ridiculous. Are we expected to leave the batwings on?

Verdict:
Itâ€™s hard to say â€œget this set.” Donâ€™t buy this for the MSRP of $12.99 if you can avoid it. The part selection is decent and it’s the cheapest way to get Batman at the moment, but for the price, there isnâ€™t anything in this set that screams “must have.” A stronger vehicular presence or one or two more minifigures might have swayed me to a recommendation. Wait for a sale on this one, or better yet, a clearance.