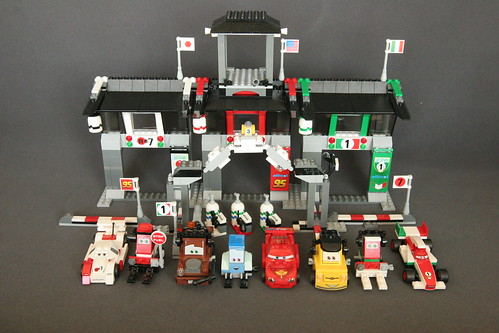 And here we go with another LEGO Cars review where you’re probably expecting me to go off angrily at some miniscule aspect of the set and pile on more complaints. I can promise you that there’s less anger, but still a high level of disappointment.

This set is supposed to represent the first leg of the World Grand Prix, the Tokyo International Circuit, hence the name, Tokyo International Circuit. Specifically, it’s supposed to represent the pit stop of three racers: Lightning McQueen, Francesco Bernoulli, and Shu Todoroki. It’s a Toys’R’Us exclusive with a price tag of $94.99, a few bucks more than what Shop@Home has it for at $89.99 . 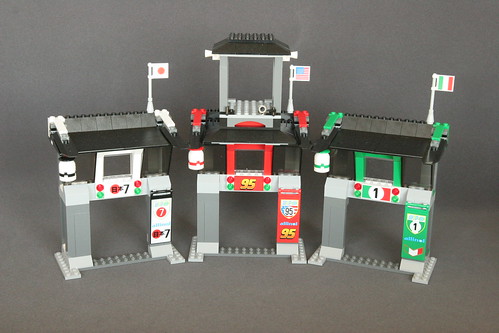 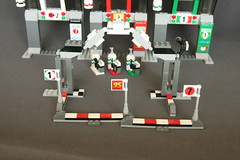 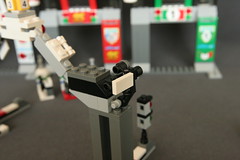 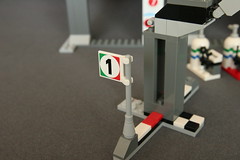 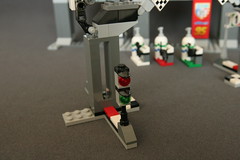 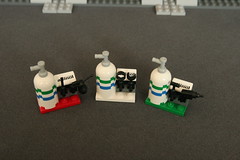 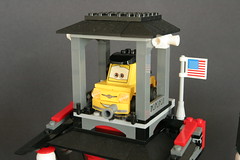 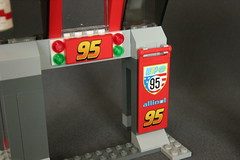 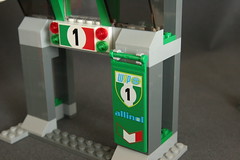 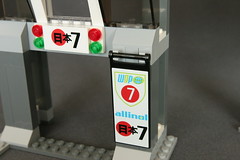 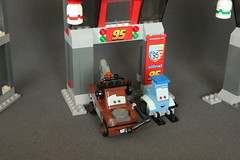 The three pitstop buildings are rather tall, with box seat viewing without the seats. Lightning’s pit has another level higher with what looks like an announcer’s box. You can put Luigi in there the way that the back of the box shows. It’s all very strange since, if memory serves, Luigi was never inside a building like that. Each of the pitstops is color coded according to the racer, and each pitstop has an Allinol fuel pump, and a flag with a lane marker. There is also a flimsy gate. Oh, and each pitstop comes with its own creepy-eyed Pittie, a non-creepy Guido for Lightning naturally. 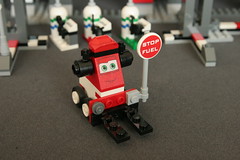 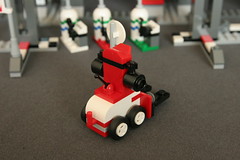 The assortment of Cars characters isn’t very vast. Pretty much every character can be found in other, more inexpensive sets so I won’t bother going into detail about them. Here, they get a set of headphones or a boom mic or some other accessory. Technically, they are variants, but overall it still feels like you’re getting hosed. Shu along with his Pittie are the only real new and exclusive Cars and while Shu is an excellent build, it doesn’t save the rest of the set from being a huge mess of props and recycled characters.

In terms of accuracy, the only eyesore would be the announcer’s box that Luigi seems to have commandeered. The gate is laughable and the set would almost be better without it and just had a regular lane marker for Francesco like the ones for Lightning and Shu. The box art looks nice when it’s all set up and beefing it up with more racers that are coming out in January 2012’s assortment should fill it out nicely to give it a more complete appearance. 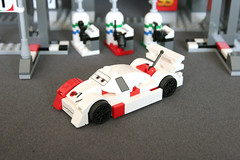 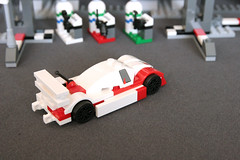 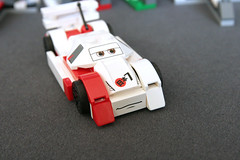 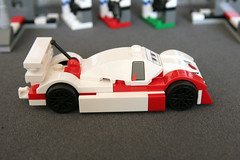 What I liked: Shu Todoroki is absolutely amazing. His Le Mans-style body translates so well into LEGO form that I dearly wish he was made available cheaply through a $7 set like 8200 Radiator Springs Lightning McQueen and 8201 Classic Mater so that everyone can have him in their collection. The actual car has this awesome red flame asymmetrical paint job on the body. You get a very slight hint of that on the slope element used for his eyes: there’s a red fang-shaped graphic over the right side window. However, the other pieces are blank as can be. It makes me think that the intent was to give Shu his full body paint job on the wedge element, the white mudguard/fender element, and possibly the 1×4 tile on the side to complete the effect. Heck, even stickers would have been welcome to give him his complete look. This is one question I would love to have answered by a designer. Despite the lack of his graphics, Shu is still amazing and one of the best Cars character in the whole assortment. The only thing wrong with Shu is the color of his wheels. I’m sure there’s a silver rimmed wheel out there that can replace the all black ones that he’s currently outfitted with.

Wishful thinking time: if Shu can come out this awesome, I can only imagine what Carla would be like. While Carla Veloso has a much curvier body, most likely because she’s female and Brazilian to boot, she too is a Le Mans-style race car and would also translate really well into LEGO form. I can only hope and pray that she will somehow see the light of day and be available in a LEGO set.

What I disliked: I keep harping on this over and over, but a few baseplates to keep everything together and standing would have been nice. I hate that there are no baseplates included in the Cars sets; they could really benefit from them to keep all the buildings, gates, lane markers, and other accessories together. The gate especially since it’s so flimsy, it will need to be adjusted and fixed every time you pick it up to move it. 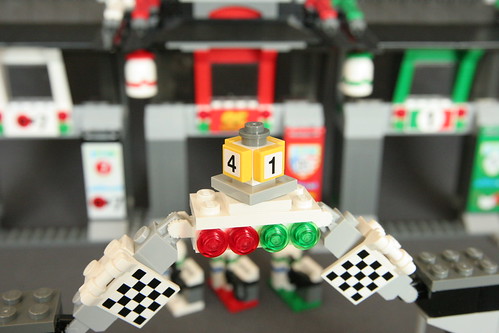 Stickers on 1×1 tiles. You have to put numbered stickers 1 through 4 on yellow 1×1 tiles. Probably the second most frustrating sticker application in a licensed theme. The first being in EV-A4-D in 8095 General Grievous Starfighter. It’s not like LEGO’s never printed numbers on a 1×1 tile before either, so I really don’t know what gives. I don’t even know wha that numbered turnstile is for anyway. 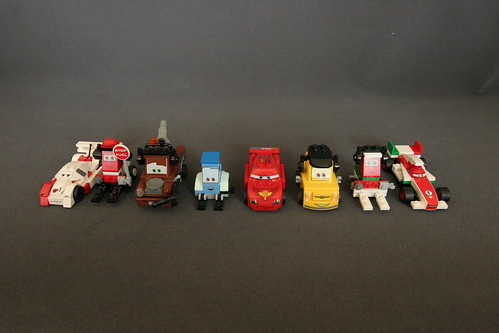 You get a lot of repeat Cars characters. I can understand including Lightning McQueen and his crew of Luigi, Guido, and Mater, but including Francesco is a bit of a missed opportunity to not include someone else. We are getting a larger variety of race cars in the January 2012 assortment, but without knowing that, it could have included Jeff Gorvette, or Nigel Gearsley, or any of the other World Grand Prix racers. Not everyone’s a completist, I realize, but other than Shu, there’s VERY little reason to buy this set. Throwing in a second exclusive racer would have definitely tipped the scale to “must buy” instead of “only get it if you’re swimming in money.”

Verdict: Only get it if you’re swimming in money. Should you desire to own more than one copy, or there is another set similarly priced that you want from TRU, with a little patience you can probably pick it up during a BOGO sale and yield a respectable discount. Your other option is to wait and see if Shop@Home deep discounts it when it’s discontinued. If you managed to skip buying any other LEGO Cars set, it’s probably worth getting then. But if not, then honestly, the main draw for anyone to want to own this set is because of Shu Todoroki; he’s awesome but he’s not $90 dollars awesome. It’s also a good start for a racing diorama; just add a few more racers and you’re set. 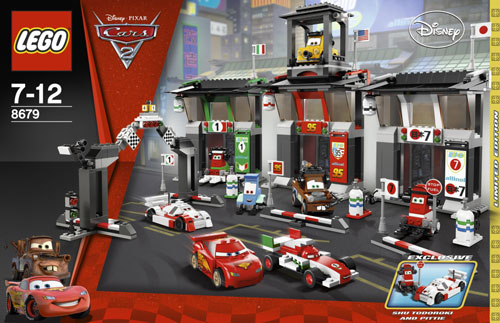