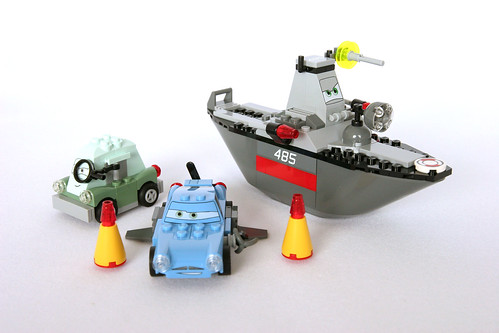 Priced at $19.99, you get 159 pieces for your hard earned Jackson, so it might be a tough pill to swallow for some. It’s got two large hull pieces that most likely contributed to the seemingly high price point. You do get three movie characters out of those pieces, though, Submarine Finn McMissile, Professor Z, and Tony Trihull, without many extras. In fact, the only extras you do get are two buoys. 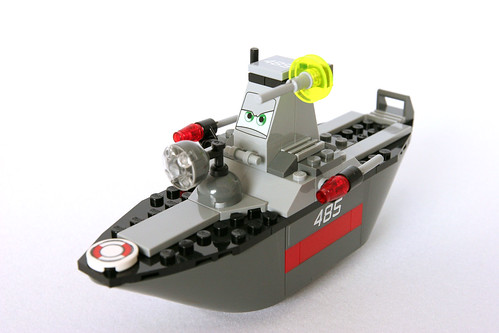 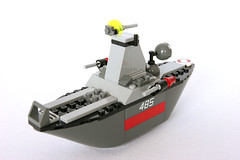 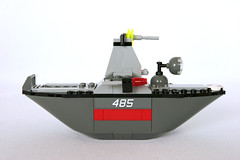 Now, we all know scale is pretty much thrown out the window when it comes to the Cars 2 sets and 8426 is no exception. Tony Trihull is way too small. Since Tony is based on a real-life military vessel called the Littoral Combat Ship or LCS for short, I think LEGO missed an opportunity in making a larger scale set priced somewhere near $50 or even as high as $100. And in this day and age with boys obsessed over firearms and the military, I would think a large ship set based on a real-life ship would have been a no brainer and attractive to the target market. Now I’m not saying he should have been built to scale; he would have been gargantuan, but something a little larger would have made the set much more impressive. 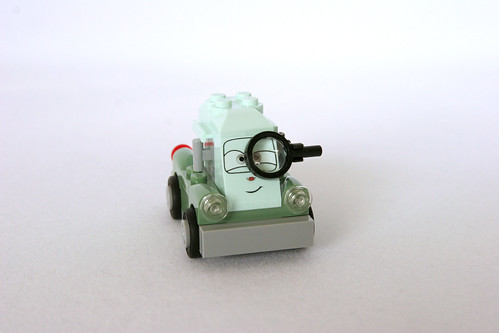 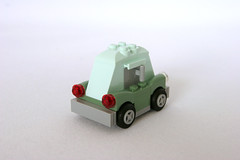 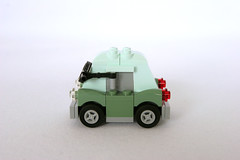 I’m amazed at how well the Cars 2 minicars translate to LEGO sets. Every minicar thus far has been built as small as possible with the palette of available elements and they are all spot on accurate. Professor Z is made from a combination of seafoam green (or light aqua as Bricklink calls it) and also sand green. His eyes are the only the only printed element and he comes with his characteristic monocle made from a minifig magnifying glass. 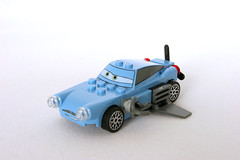 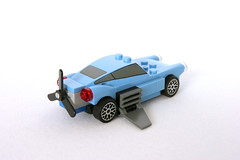 Submarine Finn McMissile is unique to this set and looks nothing like his on-screen counterpart. Not much else to say about him but I’ll expand this more later. 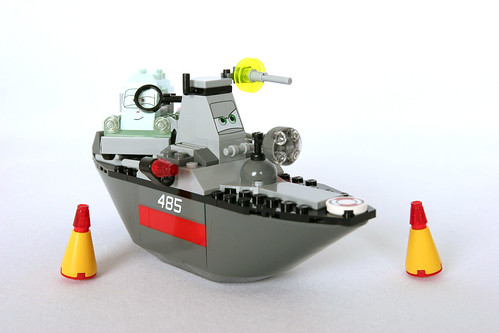 What I liked: Despite the scale being completely out of whack, I actually like the model for Tony Trihull. He’s a fun little ship and is at least big enough to let Professor Z piggyback for a ride recreating the escape scene.

What I didn’t: The scene that the set attempts to recreate is a bit lacking in the finer details. While the buoys set the stage of being out at sea, a few extra wheels and tires for Finn to leave a trail of as he makes his underwater escape would have made the scene more complete.

Submarine Finn McMissile looks nothing like his on-screen counterpart. Here’s a pic of the Mattel toy as reference: 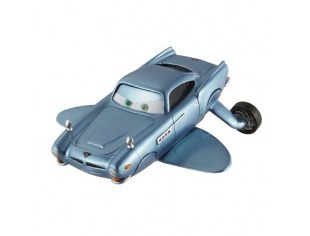 Complete and utter failure on LEGO’s part. I can’t imagine that it was modeled after a pre-release screening; maybe a concept sketch, that’s a possibility, but this Finn model is an oddball and doesn’t belong no matter how you look at it.

Verdict: Wait for a sale. Professor Z shows up elsewhere; Submarine Finn sucks; and while Tony is a neat little ship, it’s not enough to justify the high price tag. But you can bet if I can find this on clearance, I’ll be buying armloads of them to amass an army of Tony Trihulls.

But hey, if you feel the need to get this set, buy it from Amazon. As I write this, the set is on sale for $15 flat with free standard shipping: 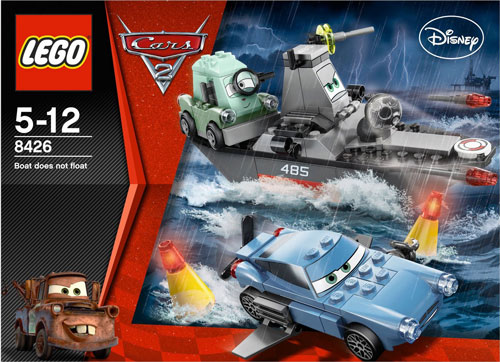