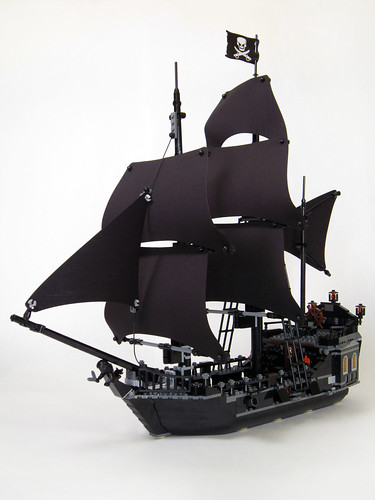 When the first wave of POTC sets came out in May there was a gaping hole in the collection. While the Queen Anneâ€™s Revenge was a pretty cool ship, where was the Black Pearl, Captain Jack Sparrowâ€™s beloved ship?! Well that gaping hole has finally been filled with the arrival of 4184 The Black Pearl. I took some time last weekend to build the Pearl with my ten year old son Connor. This review is from two perspectives: The jaded, overly critical analysis of a long time LEGO enthusiast, and mine. 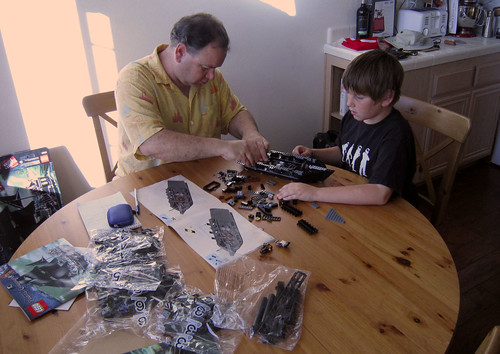 First Impressions
Tommy: Thatâ€™s a dark box, thatâ€™s a really dark box. I know first hand experience that itâ€™s very difficult to photograph a black model, and they did a fine job of it (of course, theyâ€™ve mastered the art) but why make all the box so dark? But itâ€™s a beauty, canâ€™t wait to dive in.

Connor: What movie is this from? I donâ€™t remember Davy Jones on the Black Pearl. The ship is cool, looks just like it. Six minifigs, cool.

As we opened the box and put the contents on the table we found six bags, all numbered, as well as the cardboard backed instructions, cardboard packed sails (a nice surprise), hull parts and a misc bag of masts and rigging. After arranging it all my first thought was it seemed a bit sparse for a $100 set. A quick glance back at the box revealed it was only 804 pieces, thatâ€™s over 12Â¢ a part. With five boat hull pieces the size of the box can be justified, but it still seems a bit light on the contents. We broke out the instructions and opened the free poster. Itâ€™s a pretty cool scene on one side, and an ad on the other, meh. Two instruction booklets, which is a bit misleading, itâ€™s really not that big of a set. 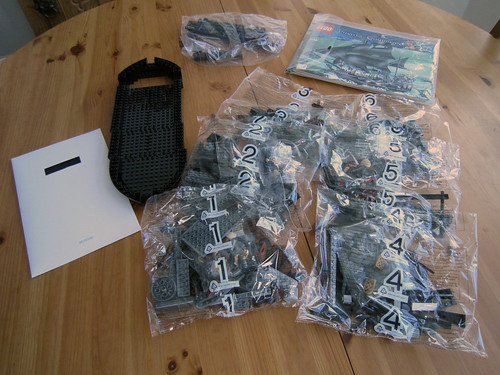 As we started building we noticed something unusual. Only one minifig in the first bag. In our house itâ€™s a long standing tradition that everybody but dad builds the minifigures, even my wife gets into it. Normally Iâ€™m a few pages into the instructions before theyâ€™re all built. As we continued to build we discovered there was a single minifig in each of the six bags. Not really good or bad, just unusual. Connor was impressed at the stage where we had to flip over the hull to put the 2×2 round boat bottoms on that the hull laid flat on the table. I was more impressed with the clever reinforcement of the masts and the connection of the jib boom. The last ship I built was 6243 Brickbeardâ€™s Bounty and the rigging on that was always wonky. The Black Pearl has pretty sturdy rigging overall. I was pleased to see that the cannons fire. Iâ€™m old enough to have witnessed the declawing of the toy industry. When I was a kid the toys were properly dangerous, from the scolding hot Thingmaker to the launching missiles of the Colonial Viper. Then things changed and toys got â€œsafeâ€, fingers werenâ€™t burned, cannons stopped firing and kids were sad. Because of this Iâ€™m always just a little surprised and pleased when a toy will actually fire a projectile. So Connor and I spent a little time playing with the two cannons and shooting 1×1 round bricks around the kitchen. By the way, that was not a typo, I did say two. Despite the fact that there are six gun ports on the Black Pearl there are only two cannons included. I have to say the box art is a little deceptive as well, featuring both cannons on one side of the ship, leaving their starboard side completely defenseless. The figurehead is a nice touch, with her little black wings. 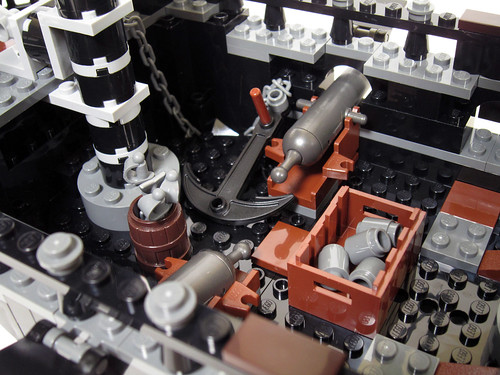 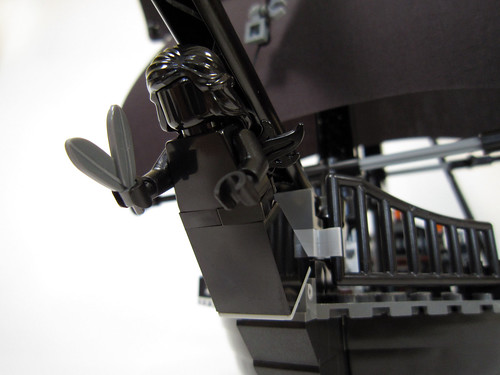 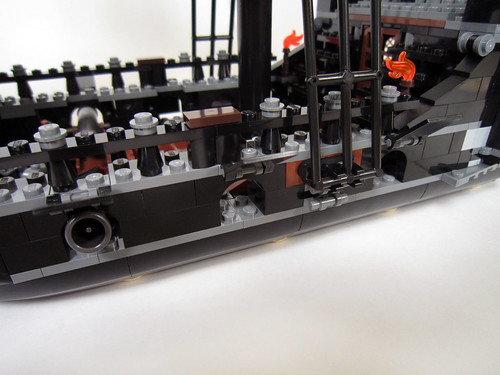 The figure assortment in this set is pretty good. Davy Jones is an awesome figure. His presence in the set is a bit baffling, as far as I can recollect he was only aboard the Pearl in one scene, to confront Calypso in the brig. Of course this was in that confusing, clusterfrak of a movie Pirates of the Carbibbean At Worldâ€™s End, so I could be mistaken. Connor made this same observation though. Davy belongs aboard his own ship, the Flying Dutchman (which hopefully will come to the POTC line someday as well). 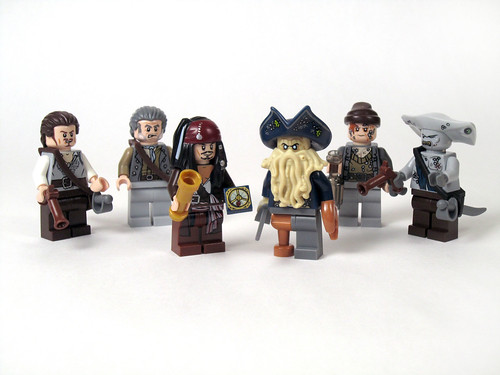 All the figures are quite nice, and it’s a good amount for a set and ship of this size. I don’t know if the figures alone would prompt anyone to buy the set, but the hardcore pirate fans out there just might. 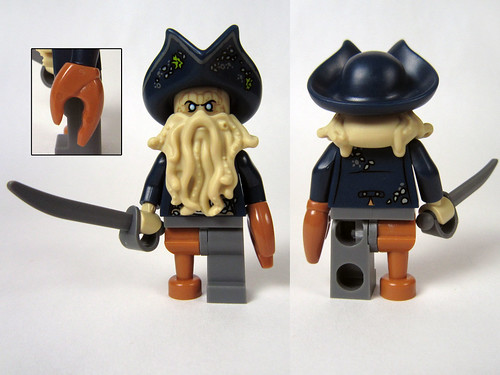 Davy Jones. Weâ€™ll start with the stand out figure from the set. Even though he seems out of place in the set, this figure is excellent. He features front and back printing on his upper body as well as printing on his hat. The custom beard/tentacle (beardacle?) part as well as his clawed left hand make this a truly unique figure. Connor was impressed that the claw is able to grasp standard rod parts and was sure to test this capability as soon as the figure was complete. We were both impressed with the figure. Connorâ€™s only complaint was the eyes, which he thought were a bit too â€˜zombieâ€™ and I had to agree. The head was also the only one in the set with printing on one side only. 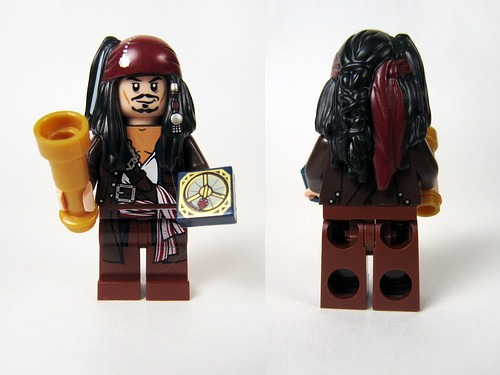 Jack Sparrow. This figure was an instant classic from the moment it first appeared in prototype form at Comic Con in 2010. If Iâ€™m not mistaken this is a version of Jack we havenâ€™t seen before with a combination of a printed overcoat and no hat. He has double sided printing on his torso, front printing on his legs and printing on his hat. As with all the other sets he comes with his compass (plus an extra one). 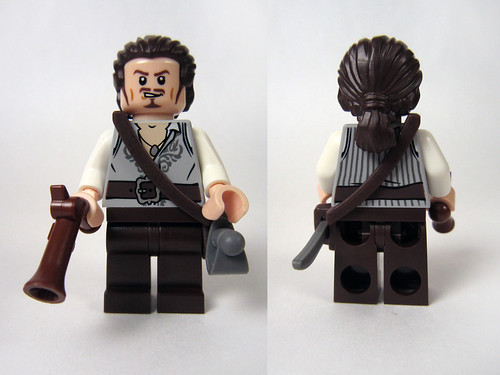 Will Turner. This figure features front and back printing on his torso, a scabbard, sword, flintlock and a great hair piece. Itâ€™s interesting that his face printing only has sideburns on one side. 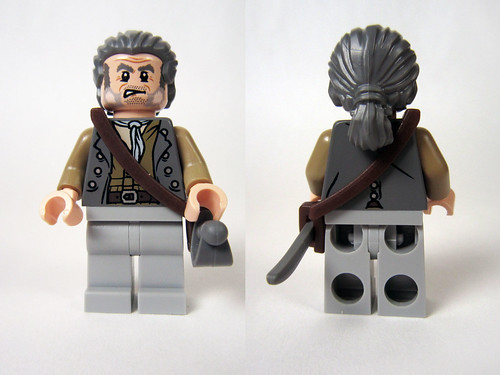 Joshamee Gibbs. If Iâ€™m not mistaken this is the exact figure from 4193 London Escape. It features front and back printing on the torso, cool hair, scabbard and sword. 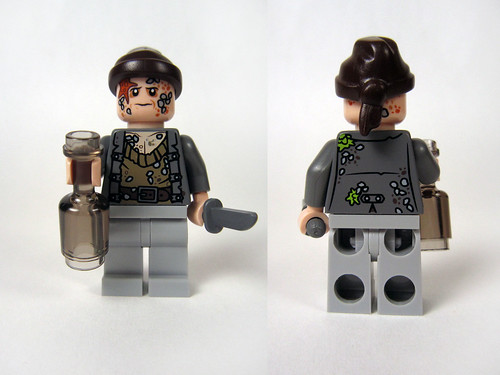 â€œBootstrap Billâ€ Turner. This is pretty strait forward figure with some excellent printing. No unique parts, but he does have one of the new(ish) bottles. I can see this torso coming in handy for anything disheveled or decayed. The head is printed on both sides, but not with a face on both. 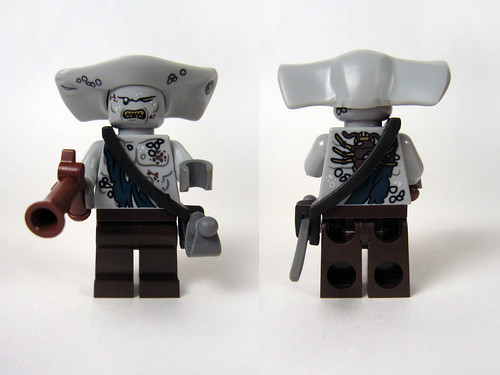 Maccus. Another unique figure and a pretty cool one. It features front and back printing on the torso and head, but with a face on one side only. Itâ€™s interesting that the back printing on the head is there, but almost completely obscured by the head piece specifically designed for the figure. The hammerhead piece is also printed and I look forward to seeing some creative uses for this new part. He also has a scabbard and flintlock. 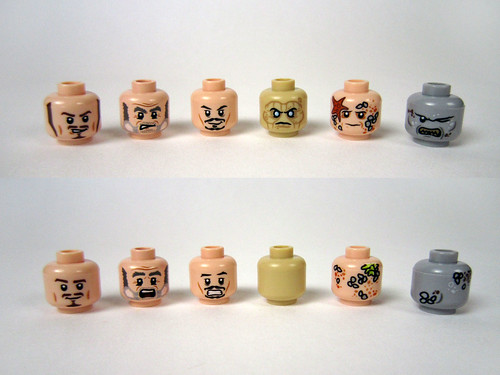 Overall We have to say this is a good set, with some minor disappointments. While Connor is pleased with the realism I have to admit I think it could be a bit longer, and not sit quite so low in the â€œwaterâ€. Iâ€™d like to see it with one more hull section and a slightly larger cabin in the back with a few more play features. As it stands itâ€™s a little difficult to get a figure in the cabin and really all they can do is sit in the chair at the table. Itâ€™s not clear if the hinged sides are there for play access or just to keep the lines of the ship. 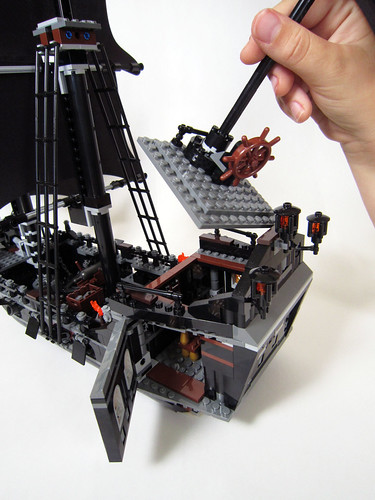 Connorâ€™s favorite aspect of the ship is the quarter deck and cabin. The removable top is easy to take off and put on. At least a couple more cannons would have been appreciated as well. Jack the monkey would have also been an excellent addition to the set, and I would happily lose one minifig for that. Itâ€™s a cool set though, and fully built and on display itâ€™s impressive. Something about all that black makes a striking silhouette. Itâ€™s proudly on display on top of my entertainment center now.

The Bad. Not much play action. Price per piece is a bit high.

The Ugly. Only two cannons, grrr. 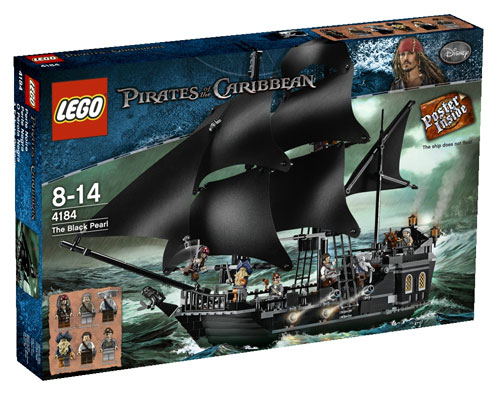