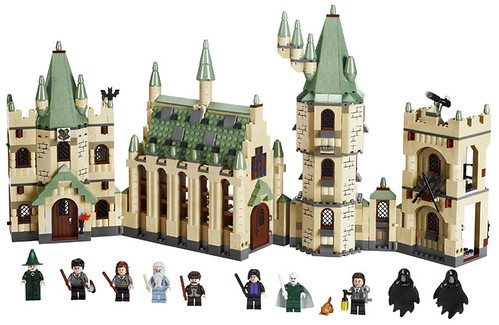 4842 is the 4th edition of Hogwarts Castle, and will probably be the last.  At the top of the pricing schedule, this set has plenty to offer both Harry Potter fans and LEGO collectors.

First, you may be wondering “what sets this apart from previous versions of Hogwarts Castle?”  Each castle has been very different from preceding renditions, and this is no exception.  4709 (2001) was centered around The Sorcerer’s Stone and included the gatehouse, Gryffindor Tower, the owlery, and the Great Hall.  4757 (2004), based on Prisoner of Azkaban, was vastly different from the first and featured a motorized clock tower, as well as a revamped Gryffindor Tower.  5378 (2007) focused on Order of the Phoenix and featured several unique spaces, such as the greenhouse, trophy room, and the pink lair of Professor Umbridge.  While previous versions have focused on events from a particular film, 4842 is more of a catch-all tribute to the entire Harry Potter saga, featuring many of the most iconic Hogwarts settings. 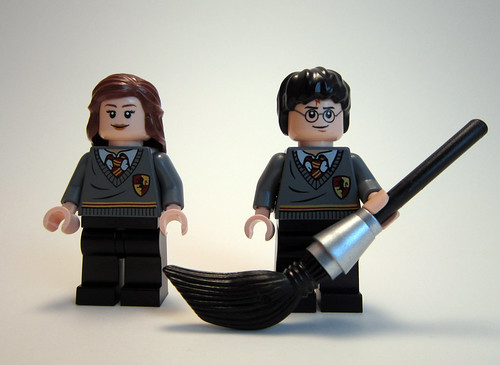 This set also includes an invisibility cloak for Harry, which does the trick pretty well. . . close enough for government work, anyway. 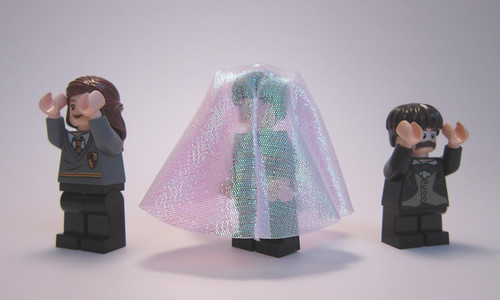 As you’d expect with a premium set like this, there are several exclusive minifigs, nearly half in this case: Professor McGonagall, Professor Flitwick, Argus Filch, Professor Snape, and Albus Dumbledore.  The latter two can be had in the Harry Potter magnet sets, but of course those are fused these days so this is the only way to pick up Snape and Dumbledore unharmed. 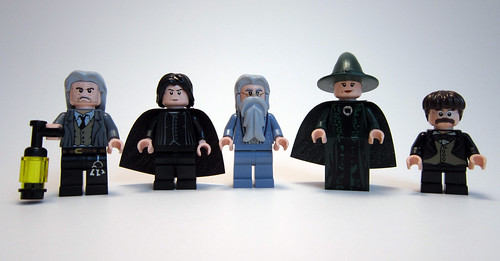 Most of the figures in this set feature front-only torso prints and no double-sided faces, but they are so beautifully done that it’s not a sore point.  Just check out the detail on McGonagall’s dress, or the sweet janitor’s keys on Filch’s pants.  The notable exception in this set is Dumbledore, who is printed front and back and also two-faced, glasses on and glasses off. 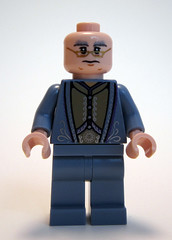 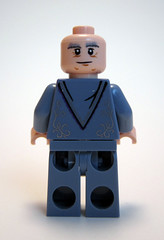 With LEGO’s penchant for conflict, no set would be complete without the baddies, so we get Voldemort and a pair of Dementors.  Voldemort’s treatment is unremarkable, though I’m not sure what could have been done to make him a really stand-out figure.  The Dementors include “patrol face” and “soul-sucking face,” seen left and right. 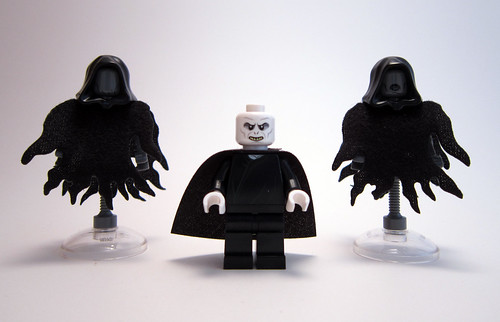 Also included is the Gryffindor Knight statue, which is a basic grey minifig with the breastplate and closed helmet w/ eyeslit that have been around in the Kingdoms and Vikings lines.  On top of all these minifigs is a veritable petting zoo of creatures, including owls, spider, bat, rat, and cat.

Given its size, this set is fairly light on play features.  Most notable are the appearing face of Sirius Black in the Gryffindor fireplace, rotating Gryffindor Knight statue (revealing Tom Riddle’s diary), and the unfolding spiral staircase in Dumbledore’s office.  The first of these is simply a plank that slides through the wall to reveal Sirius Black, and the designs of other features are just as plain. 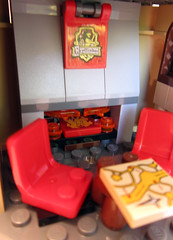 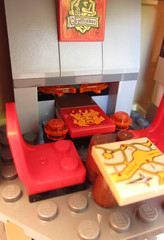 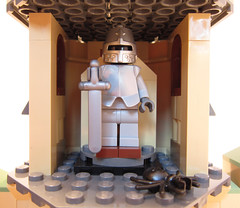 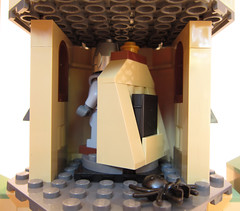 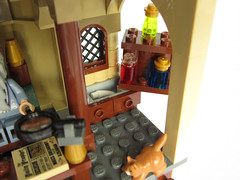 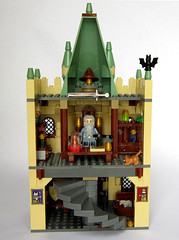 The real play value of this set is in the comprehensiveness of the representation.  So many memorable Hogwarts locales are depicted here that kids could play out all manner of Harry Potter fantasies.  Outside of the most obvious Great Hall and Dumbledore’s office, you’ll find the library, vanishing cabinet, astronomy tower, Gryffindor commons, and Slytherin commons.  Aesthetically, some of these leave much to be desired; Slytherin commons is represented by a pair of black chairs, a table, and a crest (2×2 tile), for example.  The standouts here are the Great Hall and Dumbledore’s office.  The latter is chock full of keen details and it looks great both outside and inside.  The Great Hall also has a lot going on, with a whole turkey, decorated cake, house banners, and stained glass windows.  There are also some nice details on the exterior, such as the window detail and the asymmetry of the turrets.  But the lack of ceiling height makes it fall just short of “great.” 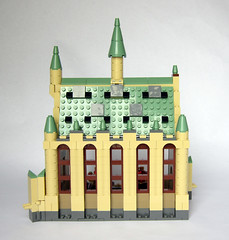 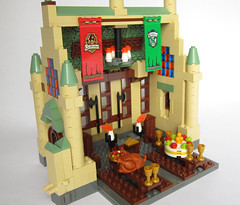 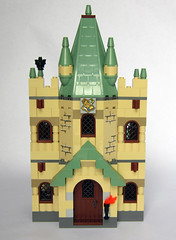 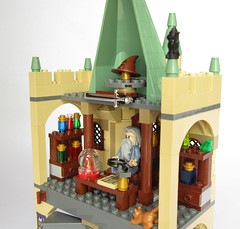 As far as the build goes, this set is fairly straightforward.  Mostly architectural, there are few surprises, but one element that’s a little different is the hung roof on the great hall, which essentially hangs in place from a hinge on a central crossbeam.  The build is also modular (of course, as the overall design is modular), which is actually a pretty cool feature here because it affords this set a lot of customizability right out of the box.  Each component is built with 2-hole 1×2 technic bricks at several base points, which allow them to be combined in various ways with 3 little connecting structures (see below).  Further, the rooms in each tower are based on the same floor plan/footprint, so it’s very easy to rearrange the rooms at your discretion.  These features also make it really easy to combine with 4867 Hogwarts and mix-n-match between the two. 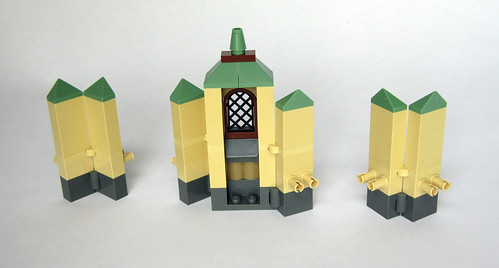 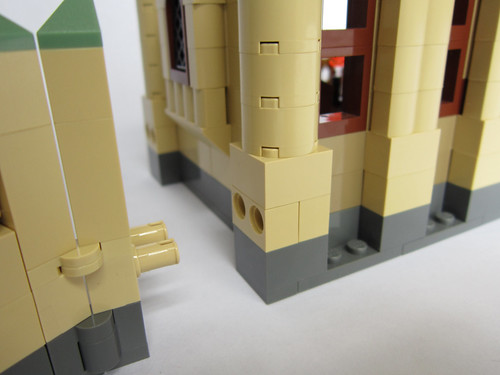 Many of the parts in this set are basic brick, plate, and slope elements.  You get lots of basic bricks in tan, sand green cones, slopes, and plates.  There are a handful of printed parts, the stand-out being the printed Sorting Hat. 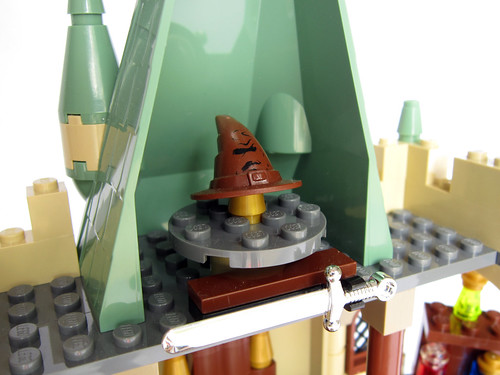 Also a fair number of nice accessories, like the chrome sword seen above.  But outside of some minifig accessories, roof parts, and the folding stairs, there aren’t too many specialty parts here.  This set is really a testament to what can be accomplished with very common elements.  It also reads to me as a very versatile parts assortment, which will be a boon to many collectors and MOC’ers. 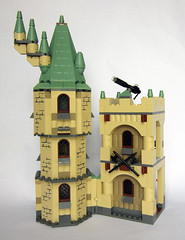 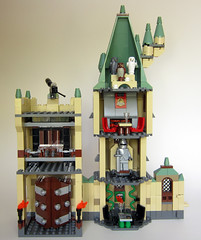 What I Liked: The look of the components.  The exterior facades of each structure look great and each has its own unique touches.

Modularity. There’s a lot of flexibility to customize the layout, which is great for play but will also make it easy for collectors and MOC’ers to rearrange and enhance to their liking.

The minifigs.  You get quite a handful, several of which are exclusive and many of which are finely detailed and stunning.

The small things.  You get tons of accessories and sweet small pieces, like the trans 1×1 bricks and cylinders.

What I Didn’t Like: The scaling.  While each of the 4 components look great on their own, they are all scaled differently, damaging the overall look of the whole model when they’re strung together.  This also creates a bit of an identity crisis.  The weird scaling makes it seem more like a playset, but it’s short on play features.  By the same token, the many details and memorable locations suggest more of a collector’s bent, but the odd scaling prevents a cohesive model.

Verdict: Pick this one up.  This will undoubtedly be a rewarding set for all Harry Potter fans.  If you’re just a casual follower, make this the one HP set you add to your collection.  On top of a sweet-looking castle, you’ll also end up with great MOC fodder for architecture and desert landscapes. 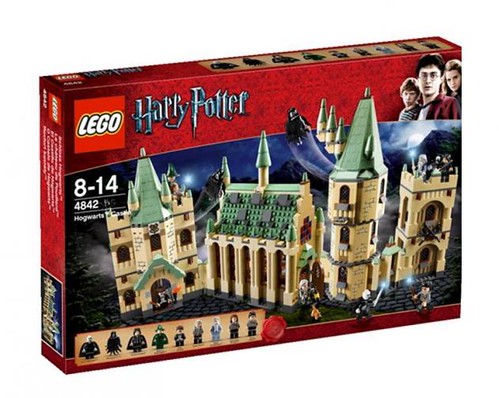 A Bunch of New LEGO Harry Potter Sets Announced, Some Available for Pre-order