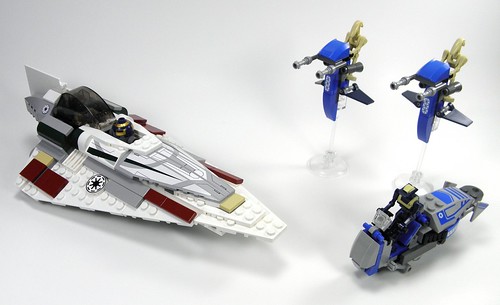 Since 2002, weâ€™ve gotten a slew of Jedi Starfighters in all shapes and sizes. Weâ€™ve gotten seven unique starfighters in System scale alone! Somehow Iâ€™ve managed to skip all of them except the very first: 7143 Obi Wanâ€™s Jedi Starfighter. It is still one of my favorite sets and one of my favorite Star Wars vehicles. The ship has recently been appearing frequently in the Clone Wars Animated series, and naturally LEGO has been producing sets based on the animated variants. 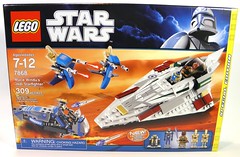 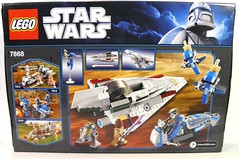 Like all retailer exclusives, the box has a â€œSpecial Editionâ€ stripe running down the side. The front box art does a good job making the set look pretty. The battle appears to be taking place on Geonosis or a similar rocky planet. The back of the box is poorly designed though. Your eye doesnâ€™t know where to look. Thicker, more defined borders for all the images would help.

On the plus side, there is not a whole lot of empty space like a lot of sets have been guilty of lately. Iâ€™m glad LEGO is working to reduce its waste and environmental impact. Maybe now they can find an alternative to those horrible plastic bags. 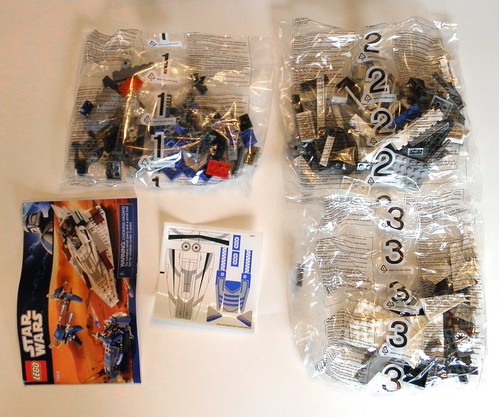 Inside the box are three numbered polybags, plus very crinkled instructions and sticker sheet. The instructions always tell you to open one bag at a time, but unless itâ€™s a huge set I donâ€™t think thatâ€™s necessary. With a set this size, I like to be rebellious. 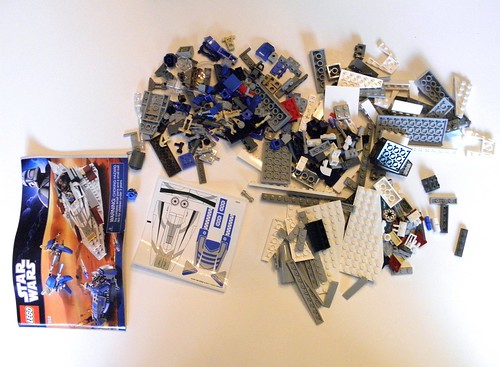 Much better. Numbered bags make it too easy. Half the fun is searching for parts out of the pile. The instructions have you start with the minifigures, followed by the Separatist speeder, STAPS, and finally Maceâ€™s Starfighter.

Not a bad assortment. You get one minifigure and four droids. Pretty good for a set this size.

The Tactical Droid is a nice addition to any Separatist army. Thereâ€™s some nice micro printing on him. Not sure why he has an anchor tattoo on his chest. Maybe he’s in the Separatist Navy. His head reminds me of something out of Star Fox 64. From what Iâ€™ve seen of these droids in the cartoon, they are cold and calculating, a quality the entire droid army should possess. Not slapstick antics and helium voices.

Mace Windu is his usual creepy Clone Wars self. At least heâ€™s not as bad as the Mandalorian Battle Pack head prints, which are pure nightmare fuel. This is the exact same minifigure as the 8019 Republic Attack Shuttle from 2009. He has no back printing, which we have been seeing in other recent releases. Plenty of room for improvement, and this was a wasted opportunity. 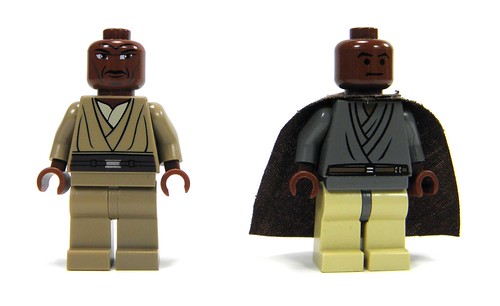 The last six years have not been kind to Master Windu. The 2005 minifig wasnâ€™t anything mind-blowing, but at least he looks human. This Clone Wars print looks more like a fish.

The real shining star here is R8-B7. I love astromechs, and this one is one of the best in LEGO form. The color scheme is pretty slick, and heâ€™s a great addition to the LEGO astromech family. I love that theyâ€™ve stuck with the new printing that covers the entire dome. At least this cartoon has LEGO churning out cool R2 variants.

The Bricklink inventory of this set lists two blasters as extra items, though I did not get any. It would have been nice to get weapons for the Battle Droids. They donâ€™t stand a chance against Mace even with blasters. This is just cruel! I would also like if LEGO included extra battle droid limbs, especially for the Tactical Droid, which has exclusive dark blue parts. 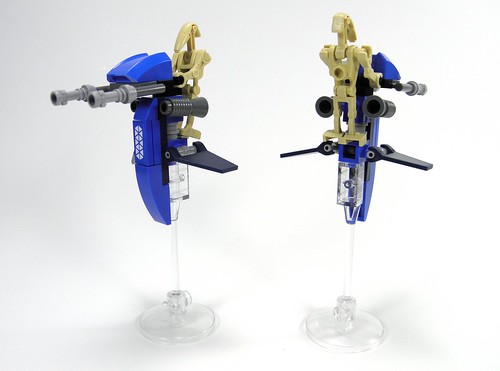 The STAPS are pretty much identical to the 30004 UK polybag. They really nailed the STAP with this design, and itâ€™s nice to see slight improvements while retaining the same design. The STAPS are now completely blue, and there’s a sticker on the 1×2 tile. 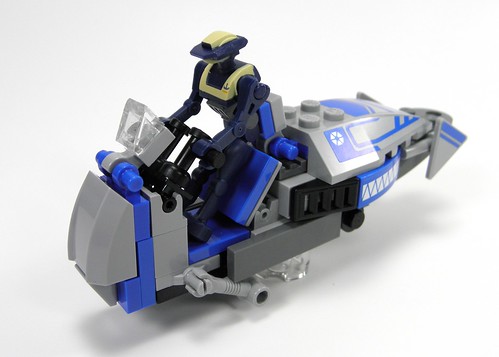 The Separatist Speeder is similar to Count Dookuâ€™s speeder from 2002â€™s 7103 Jedi Duel set, but itâ€™s been overhauled with newer parts. Itâ€™s mostly a solid build, but the foot rests and rear flaps are pretty loose. Dookuâ€™s speeder wins in that regard. Itâ€™s nice they gave the Tactical Droid something to ride on. I just wish it didnâ€™t have so many darn stickers to apply. 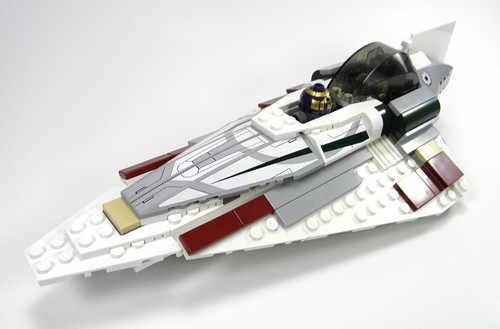 So hereâ€™s the main attraction- Maceâ€™s Jedi Starfighter. There are now four versions of the Clone Wars model, each with its own color scheme and slight build variation. First we got Anakinâ€™s, then Ashokaâ€™s, and now we have Maceâ€™s and Plo Koonâ€™s. Unfortunately, this one has the worst color scheme. I would have much preferred if Mace had a purple starfighter. That just makes more sense, and would be a great parts pack for purple. Hasbro gave him a purple one! 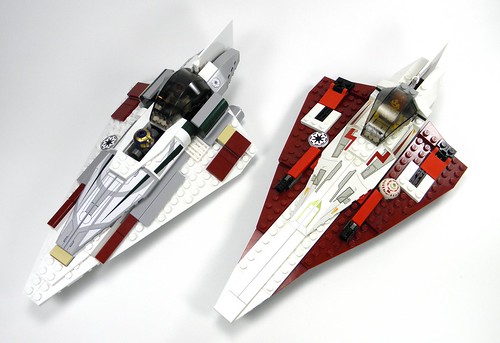 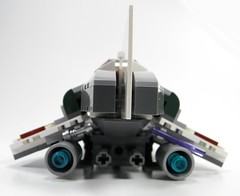 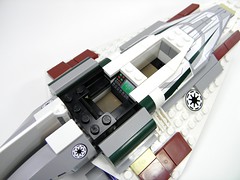 Weâ€™ve come a long way since 2002. The wings are still a bit flimsily attached, but the overall shape is more compact and cleaner. They tried to add a storage feature for Maceâ€™s lightsaber by adding 1×2 clip plates on the back, but they are impossible to access without knocking the engines off. The stickers for formerly printed parts is also super-lame. Oddly enough, the round 2×2 tile with the Republic insignia is printed, just like it was in 2002. The instrument panel slope in the cockpit is also printed. So the two easiest parts where stickers could be applied are printed. Thanks, LEGO. Overall it’s a tight design, but the stickers and color scheme hold it back. 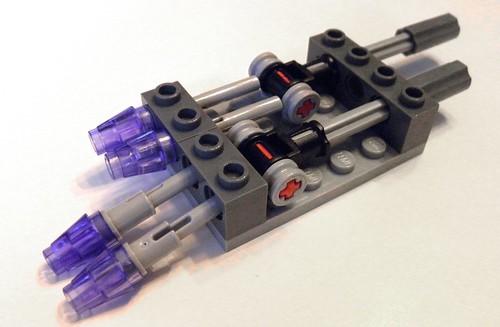 This starfighter has the best flick-fire function I’ve ever come across. What you see above is the complete mechanism. Elegantly simple, and easily removed from the model if flick-fires aren’t your scene. It actually works well too. Nicely done.

What I liked:
It is a great set with lots of playability. Thereâ€™s a neat collection of swooshable vehicles, and you get a couple of cool exclusive droids. It was a fun build, and it would make a great first Star Wars set for a kid. While the price/parts ratio isnâ€™t spectacular, you do get four vehicles and multiple Clone Wars characters. The flick-fire play feature is the best Iâ€™ve come across, and everything in the set is swooshable.

What I didnâ€™t Like:
My biggest gripe with this set is the sheer number of tiny stickers they want you to attach. Worst of all, the Starfighter has a complex geometric pattern across four stickers, all of which go on angular wedge slopes. It was a real pain to get all the stickers to line up, even for a veteran sticker-applier. Also, the inclusion of guns for the droids would have been cool. It would just add a little more playability.

Overall it’s a pretty good set with lots of playability and some cool ships for a decent value. If you’re into Clone Wars, I’d recommend picking one up.