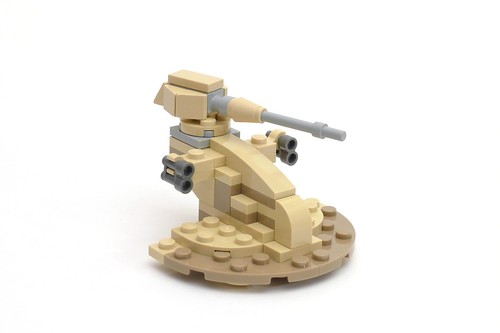 How awesome would it be to go out trick-or-treating and receive a Mini LEGO set instead of flavored high fructose corn syrup? It may not necessarily be the point of Target exclusive 30052 Mini AAT, but since this and other polybag sets are typically found in the seasonal department mixed with other seasonal items, I couldnâ€™t help but imagine the possibility. Of course, with the economy being as it is, I canâ€™t see too many people willing to purchase this $3.99 MSRP set for every kid who may traipse up to their front door. 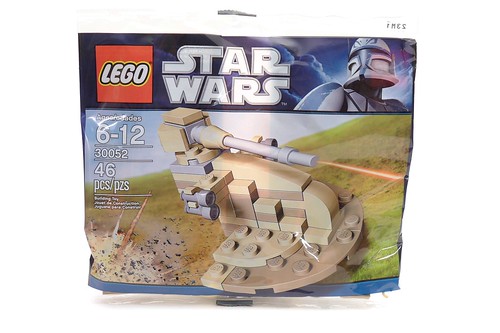 Star Wars Mini sets have always been a cheap, fun little diversion in contrast to the full boxed sets. I skipped many recent Mini sets either because I didnâ€™t find them interesting (AT-ST, have the superior original) or there wasnâ€™t a reasonable way to get them (Brickmaster exclusives, Iâ€™m not into subscriptions). It’s nice to wander into Target and find these on the shelves and the AAT is no exception. 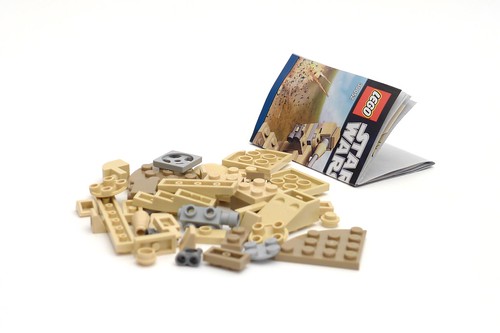 The first thing you notice about the AAT: itâ€™s tan. On that fact alone, itâ€™s tempting to buy multiples. Itâ€™s a decent source of tan 1×1 cheese slopes (nowhere near the 566 in 10214 Tower Bridge) and jumper plates. Not particularly remarkable, but at about 9 cents per piece (46 pieces + 2 extra), itâ€™s not a waste of money. 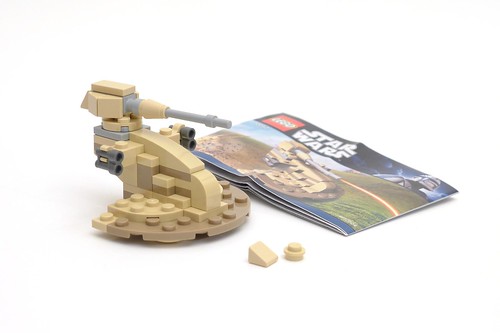 After itâ€™s built, well, it is what it is: a fairly decent representation of the on-screen AAT. It has the basic structural shape, the gun swivels, and it’s not very swooshable. Can you even swoosh a tiny tank? 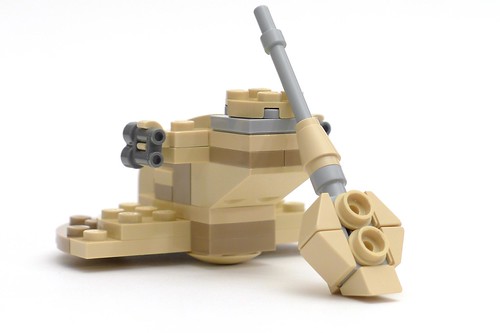 Here you can get an idea for how the main gun connects to the hull. Itâ€™s a technique I wasnâ€™t expecting and it works well. It doesnâ€™t provide the strongest clutch, but I havenâ€™t any problems with it falling off yet. 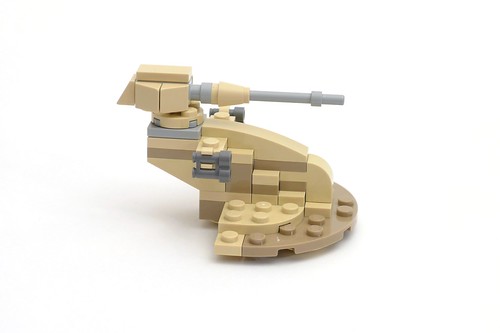 The main gun is also the most glaringly inaccurate part of the Mini AAT. It sits way too high. I stated before that this was a decent representation of the vehicle, to a point. This inaccuracy throws the model off for me. I tinkered with it a bit and determined it would have been simple to lower it closer to the body of the tank and set it slightly back, thus achieving a more accurate look, all without adding pieces. 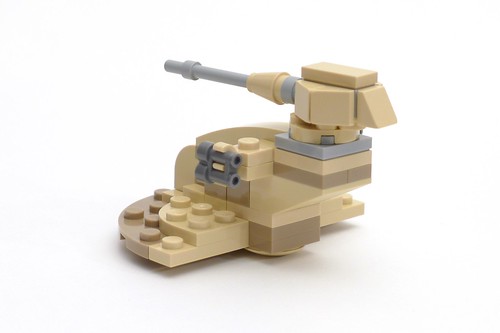 I thought about being lenient in my judgment of the model given it was a Mini set and detail was sparse to begin with, but I canâ€™t get over such a simple inaccuracy. It doesnâ€™t quite ruin the set, since I like the way the rest of it looks, but itâ€™s prominence makes it impossible to ignore. 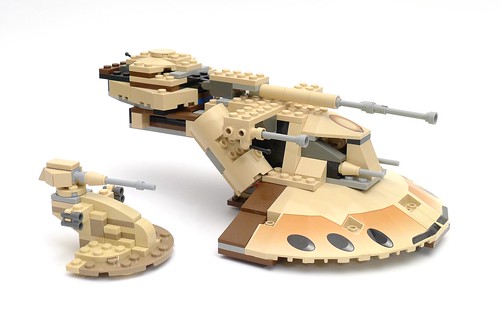 The other major inaccuracy is the lack of detail on the sides of the hull. This detail is represented on the larger 7155 AAT as the two large tan cylindrical pieces. I’m a little more forgiving of this oversight because of the scale and I’m not sure of a practical way to make the improvement. 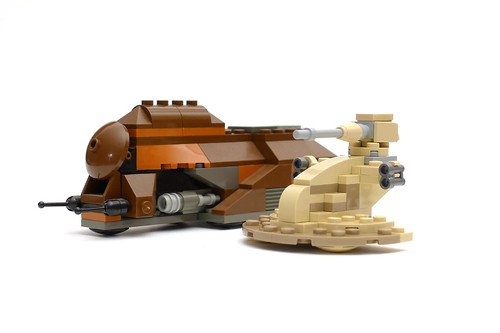 30054 Mini AAT is an ok entry into the Mini Star Wars line-up. Iâ€™m not overly impressed how it looks next to the 4491 Mini MTT, but it is better than many of the the other Mini sets. If the position of the main gun had been more accurate, Iâ€™d be lauding this set, but as it stands it makes for a slightly better parts pack than an AAT. I donâ€™t plan to dismantle the set and piece it out just yet (there is the option of returning to Target and getting a few more while they’re available). I like it just enough to place it on the shelf with the rest of the Mini sets. However, if one day Iâ€™m working on a creation that requires a part or two or more and this set happens to have what I need, Iâ€™m not going to think twice.