This set is mis-titled; it should be called Ultimate Letdown Francesco. 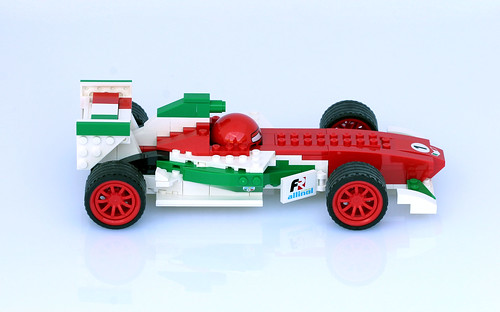 One of three Cars sets labeled with the “Ultimate Build” moniker, this Target stores exclusive set has the lowest piece count (196) out of the three and is severely overpriced at $29.99 MSRP. It brings Lightning McQueen’s main rival in the Cars 2 movie to a larger scale. It’s quite puzzling though why Francesco would be chosen for an UB set; his role is minor at best with others, such as Finn McMissile or Holly Shiftwell, having a much more significant role plus more screen time than Francesco. Still, with his open wheel design, he stands apart as being one of the few if not the only Formula 1 car featured in the World Grand Prix race. Only one other LEGO set comes to mind to compare Francesco to, and that is the Shell service station exclusive, Model Team 2556 F1 Ferrari. But after building this set, sadly, Francesco does not even come close to the Shell F1 set. 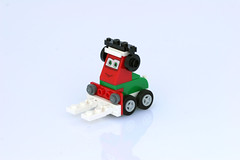 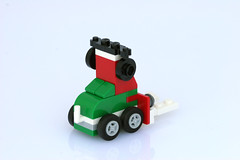 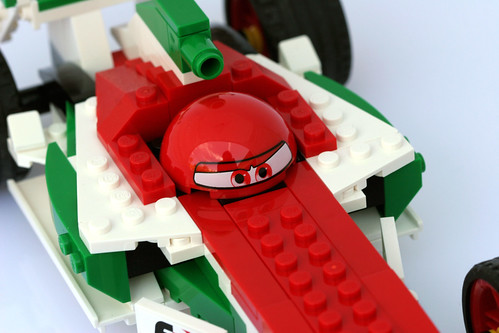 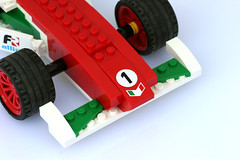 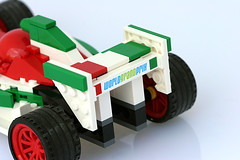 What I didn’t: There is nothing “ultimate” about this build. Truth be told, when I first heard of the “Ultimate Build” sets before seeing any official announcements, I was imagining something along the lines of the UCS sets from the LEGO Star Wars line or, as I mentioned earlier, a Model Team set. I admit I set myself up for disappointment, but sitting at $30 bucks for 196 elements, I already had a bad feeling about it. The design is simplistic with stickers adding a few accents here and there. I wondered if the source material is to blame with it’s clean lines and lack of detail, so I hopped on youtube and found the following turntable video:

And I’d have to say no. There are so many interesting angles and lines on Francesco, that it seems like the designers just gave up and dumbed everything down. The low piece count made this build a short affair. You’ll be done somewhere between 10 and 11 minutes and immediately after realize how sucktastic this set is. 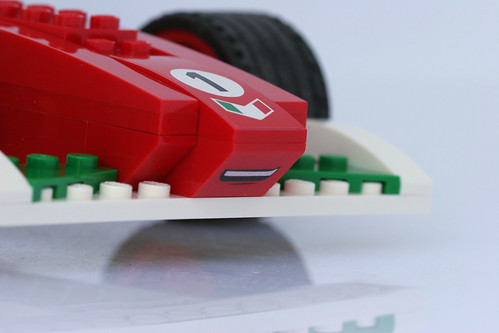 The mouth element. I bought this set and had it built before I went to go see the movie, so I was paying particular attention to the way his mouth was rendered. In the set, his mouth is printed on a 2×2 45 degree inverse slope. In the movie, there is a slight hint of a inverted slope, but there is more of a curved front end than anything else. And it’s at such a bad angle, you’d never see it unless you were eye level to the ground. 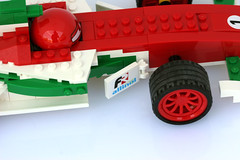 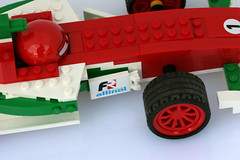 The side flaps. This is one of those building techniques that annoy me to no end: positioning an element at a particular angle with no support. This plagues the V-wing fighter’s wing flaps. And, you guessed it, it rears its ugly head on Francesco as well. Try as I might, every time I picked up Francesco, I’d invariably push the Allinol stickered flag elements against the body.

The price. I’ve said it like three times already but it’s worth harping on a fourth time: the set is way overpriced.

Verdict: Avoid it like the plague. Even finding it at 50% discount, it’s still hard to recommend. Had LEGO brought the scale up a few notches, made an extremely nice sculptural piece with a few hundred more pieces and priced it at $99, I think they could have had a real winner. Heck, make it into a Technic set a la Williams F1 Team Racer from a few years back. Ultimate Build Francesco should be called Ultimate Letdown; it is an embarassment to the franchise. It almost angers me that this set is so bad. It’s so bad, I’m not even going to include the “buy this set” link like all the other reviews have. Avoid it. Seriously. Don’t even give it as a gift, unless you want to punish the gift recipient.

Have you gotten the hint yet?