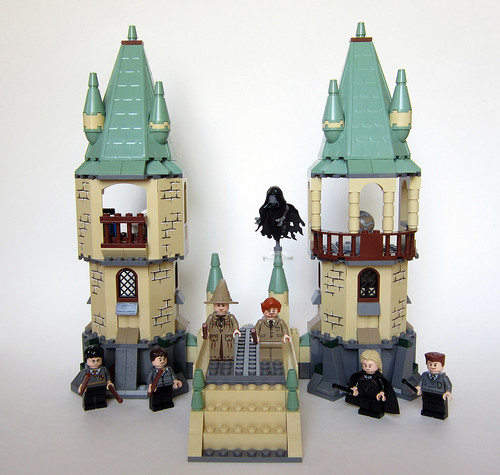 At first glance, 4867 Hogwarts looks like just a poor manâ€™s version of the full-blown Hogwarts Castle.Â  Even more puzzling is the fact that right next to it on the shelf IS 4842 Hogwarts Castle.Â  So beyond scope and size, what really sets the smaller 4867 apart from its big brother?

First off, it should be noted that 4867 is intended to depict a couple specific events from the Battle of Hogwarts, notably the collapse of the entry bridge and destruction of the Room of Hidden Things (hence, the Gregory Goyle minifig).Â  By extension, all of the minifigs here are included for their various roles in the battle.

In this corner, we have our hero Harry Potter, flanked by his pals Neville Longbottom, Professor Sprout, and Remus Lupin.Â  Harry and Neville are each two-faced, one of Nevilleâ€™s showing his buckteeth. 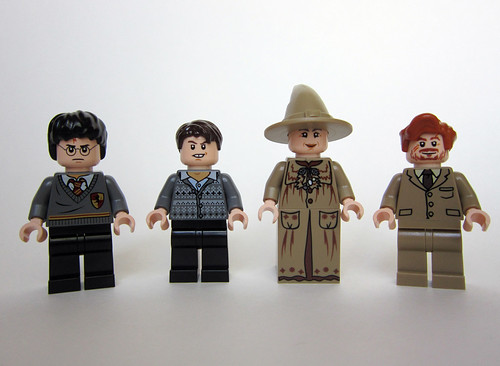 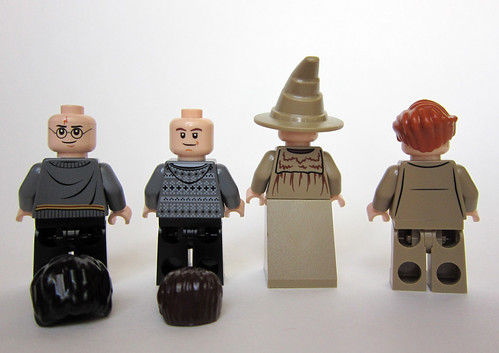 And in that corner, the challengers: Lucius Malfoy, Gregory Goyle, and a Dementor.Â  Lucius has a sweet alternate face print of a death-eater mask.Â  The Dementor also sports two looks, his â€œpatrollingâ€ look and his â€œsoul-suckingâ€ look.Â  Lucius’ hair piece is a blonde version of Dumbledore’s hair, and it’s great to get a Slytherin torso with Goyle to offset all of the Gryffindor torsos from this and other sets. 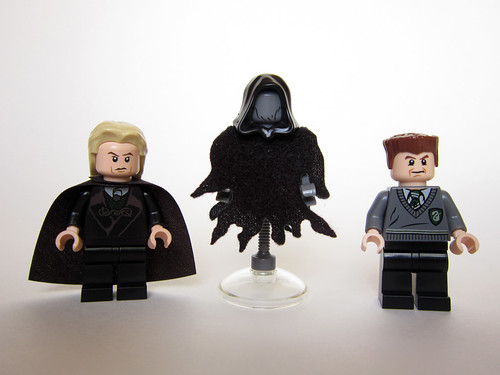 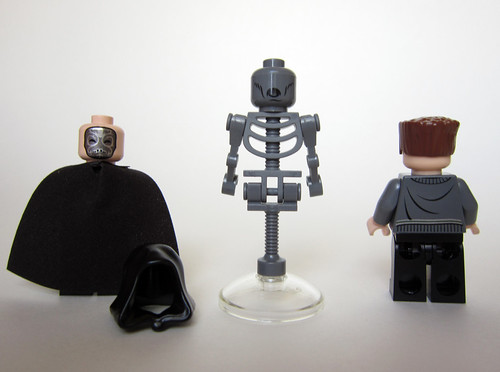 Neville, Goyle, Lupin, and Professor Sprout are all exclusive to this set. Â While I appreciate there being so many figs (both heroes and villains), the inclusion of Goyle is just strange because heâ€™s such a minor character and is only ever mentioned as a member of Dracoâ€™s posse.Â  It wouldâ€™ve been nice to see Draco, Ron, and Hermione to really fill out the set.

For this being a mid-range set, it is awfully light on features.Â  The only actionable feature is the â€œcollapsingâ€ bridge.Â  Well, in the movie it collapses.Â  Here itâ€™s more of an â€œexplodingâ€ bridge.Â  The bridge is busted by turning a spindle with some claws on it to lift the panels out of place.Â  Itâ€™s a simple design, but if just an inch more thought had gone into it they could have built it to destroy the bridge in a domino-like fashion.Â  On the upside, itâ€™d be an easy modification to make it movie-accurate. 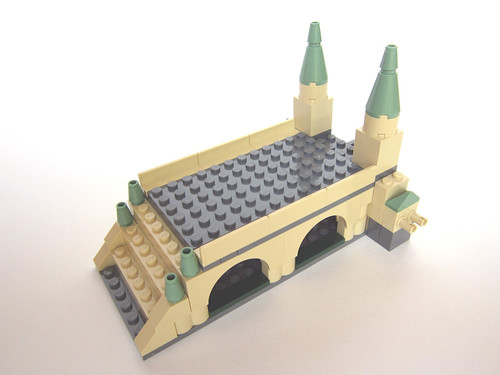 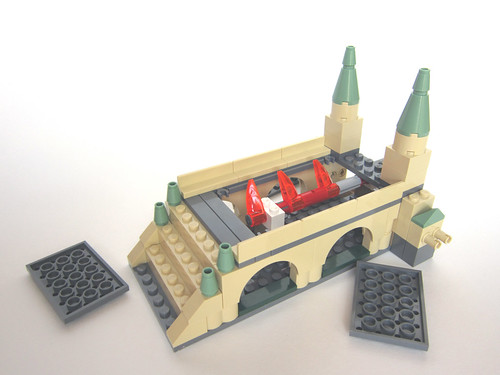 Outside of that, thereâ€™s not much to report.Â  The towers are hinged so can be moved around and so-forth, but unfortunately do not come together to create a single, complete tower.Â  Each tower is comprised of a few rooms that are iconic in some fashion, including the Astronomy Tower, Harry & Ronâ€™s Gryffindor bunk, Lupinâ€™s classroom, etc.Â  Most are recognizable, though one room is completely unfurnished and merely alludes to all of the stairwell paintings in the castle.Â  Each tower is built on a completely empty cellar, as well, so you get a fair amount of airspace here. 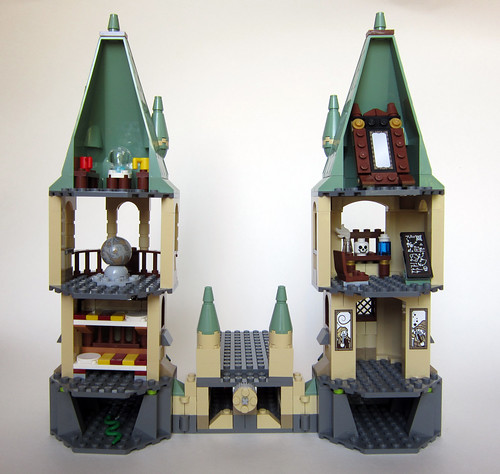 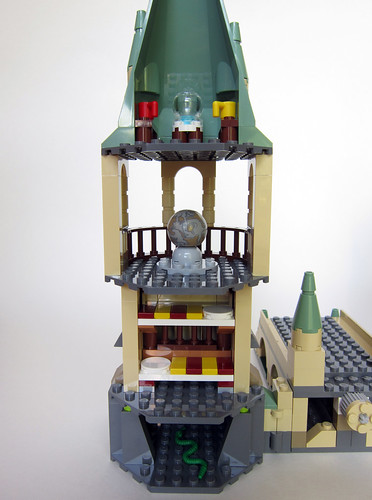 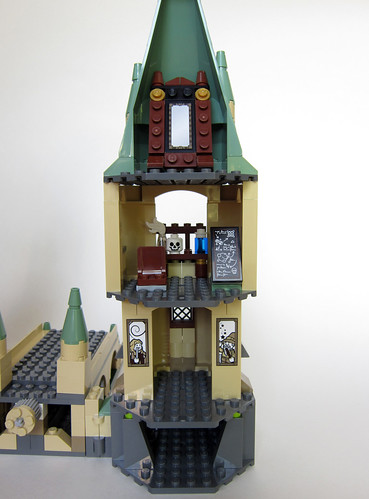 As far as the build goes, it makes the cut as a young builderâ€™s Hogwarts Castle.Â  Itâ€™s a modular build, which isnâ€™t that offensive in itself.Â  But the bridge is exceedingly simple to build and the towers are virtually identical in their overall construction.Â  With all of the large plates, wall panels, and pre-fab roof parts, this set builds up quick and doesnâ€™t have much else to offer in terms of parts.Â  There are a couple of small goodies, but nothing to go nuts over.

What I Liked: The overall look of the model.Â  When finished, it looks quite nice and the symmetry gives it an air of grandeur (albeit a very small air).

The figs.Â  There are several of â€˜em, almost equal sides of good and evil, enough key players to play out the Battle of Hogwarts with this set alone, and enough variety that thereâ€™s virtually no overlap with 4842 Hogwarts Castle.

What I Didnâ€™t Like: Lackluster build.Â  Again, modular builds arenâ€™t so off-putting, but everything about this build is just. . . plain.Â  And repetitive in many respects.

Too many large parts.Â  This hurts the quality of the build mostly, but also means that thereâ€™s little opportunity for other, more interesting parts.Â  Unless youâ€™re into building mammoth medieval mansions, thereâ€™s not enough here to appease parts hounds.

Verdict: This set is really best as an augmentation for 4842 Hogwarts Castle as youâ€™ll have many of the best-known scenes and characters covered between the two. 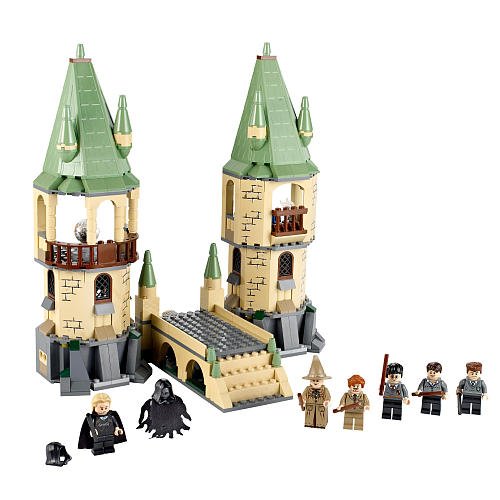