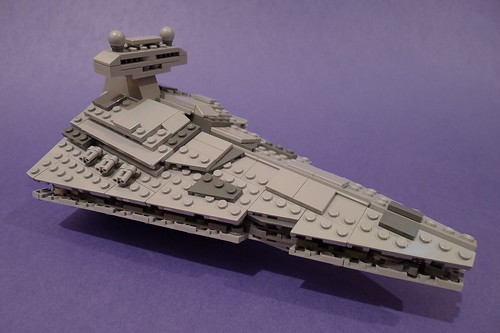 Itâ€™s 2009, I get a glimpse of the first Midi set, 7778 Midi-scale Millennium Falcon. I completely dismiss it. I decide Iâ€™m not going to bother with it. Itâ€™s too small. Itâ€™s too expensive. Itâ€™s too boring. What place does it have in my collection? I move on and forget about it. Several months pass and one day while Iâ€™m at Wal-mart (where both 7778 and 8099 are retailer exclusives) I stroll into the LEGO aisle and there sits the Midi Falcon with a red clearance sticker of $19 (MSRP was $39.99 US). What do I do? I buy it and guess what? Itâ€™s awesome. So youâ€™d think if I ended up liking 7778 enough to call it awesome, I’d be eager to get my hands on the latest Midi-scale set, 8099 Midi-scale Imperial Star Destroyer. Not quite. 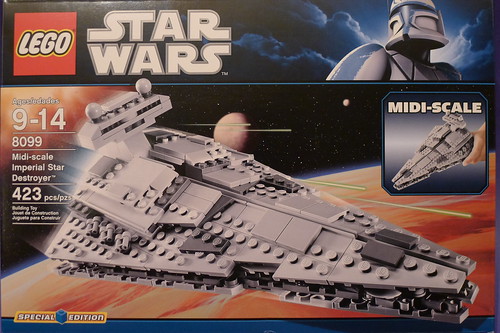 I dismissed this set, but for a different reason. You see, when the Falcon was on Wal-martâ€™s shelves in 2009 through 2010, I noticed something. Nobody seemed to be buying it. I donâ€™t know if it was confined to my region of the world or if it was widespread. Interest in the set appeared, to put it politely, minimal. I was convinced that if I waited on the Midi Star Destroyer, I would find it on clearance in a few months. I was right. This was simultaneously fantastic and disappointing. 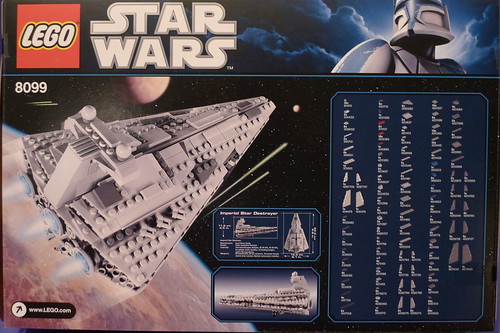 Itâ€™s fantastic because otherwise I might’ve skipped this great “little” set. Like the Midi Falcon, the Midi Star Destroyer had an MSRP of $39.99 US, which at 423 pieces (and about 9 cents a part) is notably unusual for a licensed theme set. One of the initial problems with the set (and the Falcon) is itâ€™s difficult to judge by the box or images on the internet. I dismissed the Falcon because what I saw on the box didnâ€™t justify the price tag. That thought crossed my mind with the Midi Star Destroyer, but instead of jumping to conclusions, I decided to wait until it was in my hands to form an opinion. 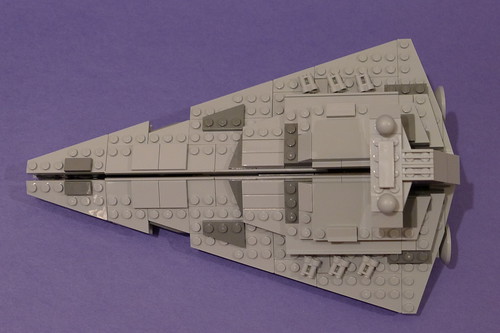 The Midi Star Destroyer is surprisingly substantial. Donâ€™t get me wrong, itâ€™s small in comparison to the other Star Destroyers (10030, 6211), but thatâ€™s the point. You can easily hold it in your hand and it remains stable. Because of that stability, itâ€™s the most swooshable LEGO Star Destroyer to hit the market (putting aside the Mini Star Destroyer, but letâ€™s not go there). I swoosh it all the time. I know it doesnâ€™t swoosh in any of the films (does jumping in and out of hyperspace count as swooshing?), but if I can, Iâ€™m going to do it. Itâ€™s much more satisfying and less frightening than trying to swoosh the UCS Star Destroyer. 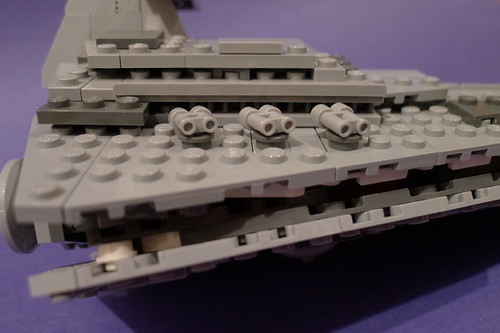 It packs a large amount of detail, though not always the most accurate (three turrets per side, instead of four), in its compact frame. The details, both obvious and subtle, look great for the size without much detraction. My biggest complaint with the appearance is the sporadic use of dark gray. It does bring out some surface detail and removes some of the monotony on each of the four wedges, but I canâ€™t help be feel it looks wrong (thatâ€™s because it is!). Also, there are no stickers or printed parts, so if youâ€™re looking for a gray parts pack filled with wedge plates of various sizes, tiles (including 1x3s), and a handful of plates with clips, this is a great choice. 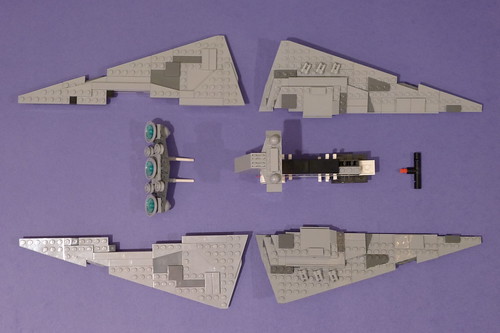 Speaking of monotony, thatâ€™s how Iâ€™d describe the construction of those four wedges. 8099 isnâ€™t the worst offender in the monotony category (usually reserved for UCS sets), but itâ€™s worth noting if youâ€™re looking for a quick, interesting, or varied build. 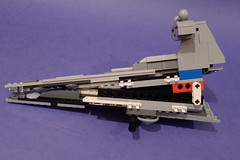 The most interesting portion of the build was the interior structure. It holds everything together and it does this job incredibly well. The design is rather clever while being more straightforward than I imagined from looking at the box. Attaching the wedges to this structure was a breeze and I think I only had to do it twice to get it right without breaking it. 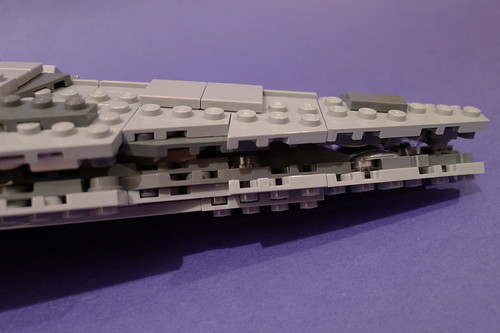 One aspect of the diminutive size that really works is the greebling detail along the sides. There isnâ€™t much in terms of interesting pieces, but because of the toothing on the wedge plates it manages to look more detailed than it otherwise would. The designer(s) did throw a few white and transparent round 1x1s for additional detail, but on this scale I find them to be visually distracting. 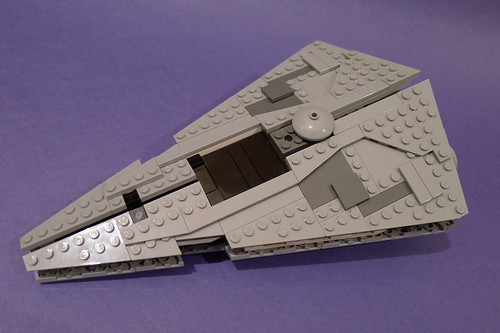 A complaint I hear or read frequently about LEGO Star Wars sets is the lack of a detailed underside, or in some cases, the complete lack of an underside. Well, here you go, a genuine underside! That should’ve been on the box and as an exclamation in the catalog as a selling point. Granted itâ€™s the underside of a Star Destroyer where there wasnâ€™t much to begin with, I still can’t help but love it! Iâ€™d even call it more detailed than the underside of the UCS Star Destroyer (10030). Why? This set includes that dome thing (uh, Solar Ionization Reactor, thanks Wookieepedia)! Thatâ€™s major points in my book. Iâ€™m not even disappointed by the docking bays, which are represented by black tiles. I would have like each bay to have been sunk in one plate deeper for added emphasis. 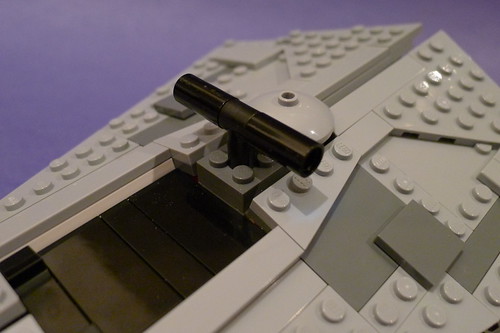 Also present on the underside is a simple and effective five-piece stand. Itâ€™s held in place by a Technic axle and pin connector and a red Technic 2 axle. It keeps the ship level when displayed and can easily removed when you want to go for a swoosh. 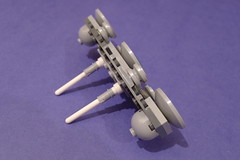 At the rear of the ship we have the least stable component of the build, the thrusters. They connect to the body of the ship with Technic half-pins slid over antennas. This design holds the thrusters to the central structure fairly well. Iâ€™ve found while playingâ€”testing, I meanâ€”this section tends to rattle ever so slightly and in some cases, if bumped, it falls off leaving the half-pins and antennas behind. The real problem comes from the three dishes along the back. Since they only have one central connection point, even the lightest touch will pop them out of place. In display situations, this isn’t much of a problem, but in play scenarios (or holding the set from the rear) it might be. 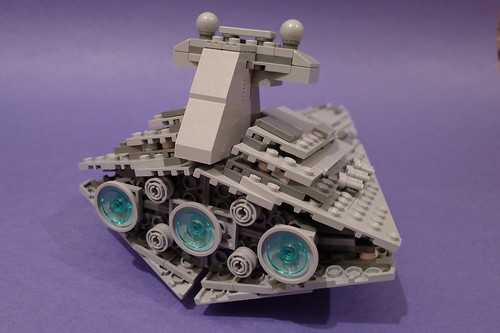 Remember how I said finding this on clearance was both fantastic and disappointing? Well, I ended up liking this set much more than I thought I would. I’d like to see the Midi line continue, but if the trend Iâ€™ve witnessed continues and these only sell on clearance, I doubt thatâ€™s going to happen. Iâ€™m not even entirely sure who the market is for this scale. Is it the people who ogle the UCS sets, yet aren’t in a position to buy them? Maybe. Is it for the people who don’t have the space for the UCS sets? Again, maybe. Theyâ€™re recommended for kids aged 9-14, but with the lack of minifigures and play features I canâ€™t imagine too many kids in the age group would be excited to get this as a birthday present.

Since Iâ€™m not aged 9-14, I look at it differently. I see a superb representation of the Imperial Star Destroyer that isnâ€™t $300+. Itâ€™s easy to display nearly anywhere and looks nice among other Original Trilogy sets. Itâ€™s a bit less visually interesting than the Midi Falcon since itâ€™s a mass of gray and only gray and thatâ€™s where I’m conflicted on the $40 price tag. Itâ€™s too plain and unexciting as a LEGO set to justify a full price purchase if it can be avoided, even at 9 cents per part.

That said, if you have the opportunity to get one I still recommend it and highly if you can find it under MSRP or missed out on previous Star Destroyers (Note: As of this writing 8099 is no longer in production so you might have to do a little searching to find one. I did a quick search and found several sub-MSRP). Even if you donâ€™t care for Star Wars it makes a great parts pack, so if you have an active imagination, you can’t lose.