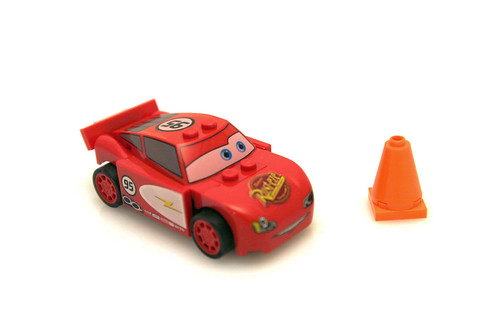 You wouldn’t think such a small set would garner so many complaints.

8200 Radiator Springs Lightning McQueen is one of two entry level Cars 2 themed sets priced at $6.99. Clocking in at 35 pieces, there isn’t much going on in this set to feel like you got a good value since nearly a quarter of that piece count goes towards wheels and tires. You do get a traffic cone as an accessory and that’s pretty much it. I’m still trying to figure out why the set is labeled as “Radiator Springs Lightning McQueen”. In Mattel’s Hot Wheels line of Cars and Cars 2 die-cast vehicles, they use such monikers to differentiate the multiple versions of the same character. You have versions of McQueen such as Dinoco Lightning McQueen, Cruisin’ Lightning McQueen, Tongue Lightning Mcqueen, and the list goes on and on. So I wonder if LEGO labeling this as “Radiator Springs” was because they intend on releasing more versions of him, they wanted to differentiate him from other versions found in other sets, or if it was imposed by the licensor. 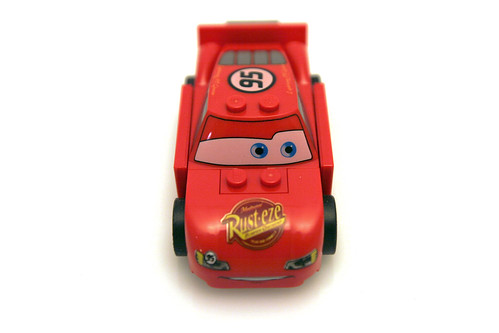 What I Liked: They nailed the shape of Lightning. There are three new molds in this set: the windshield/roof, the front end, and the rear tail lights. Some of those elements appear in other minicars, but here combined together it perfectly captures the look of Lightning McQueen.

The elements are printed, even the door panel tiles, which is surprising given LEGO’s propensity to include stickers wherever possible. With the other Cars sets in queue for review, though, this is the norm for the minicars and not the exception. The level of detail they were able to achieve on the prints is nothing short of amazing. The headlights on the hood are sharp with plenty of detail and the racing decals are still legible despite their small size. I can clearly read “Piston Cup” without a magnifying glass. 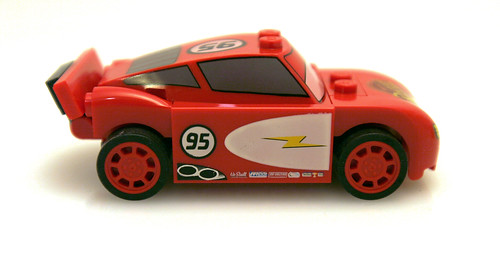 Though the elements are printed, they aren’t without flaws. The whites of the eyes and the round 95 on the windshield/roof element isn’t as opaque as you are lead to believe from the box art and fancy photos on Shop@Home. They are translucent to a degree, enough to let the red from the base ABS show through making him look like he has a bad case of pinkeye. The white printing on the door panels is slightly better, but on one of my tiles, the racing decals suffer from misaligned colors and a little color bleeding. I bought this set when they first hit the sales floor at my local Target store and I’m tempted to buy another set just to see if these issues were addressed in later production runs. 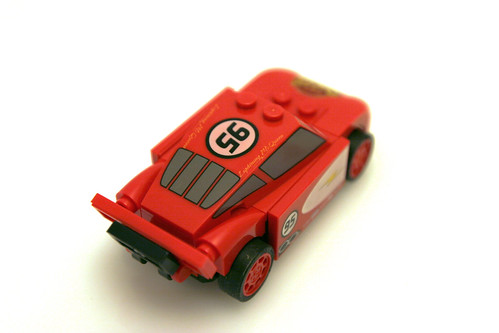 Where are the fenders? The way that McQueen is constructed, and this goes for almost every other LEGO Cars minicar, the tires visibly protrude from the vehicle body and it looks like he is missing fenders. LEGO opted to use the wide version of the wheel holder plate which makes the wheels protrude out enough to line up against the door panel plates. It was the only way to keep the width uniform from front to back, but despite that it still looks like the vehicle left the factory unfinished.

Finally, my last gripe is that this is the exact same version of Lightning McQueen you get from Flo’s V8 Cafe. This is a missed opportunity to provide a unique eye print in either set and for those collectors whose gotta have them all, it would have justified purchasing this set. Sure, it gives kids easy access to Lightning if they can’t afford to get the more expensive Cafe, but a unique eye print would have been nice.

Verdict: Avoid it if you plan on getting any other set that has Lightning in it, especially Flo’s. But hey, I’ll link to the Shop@Home page anyway: