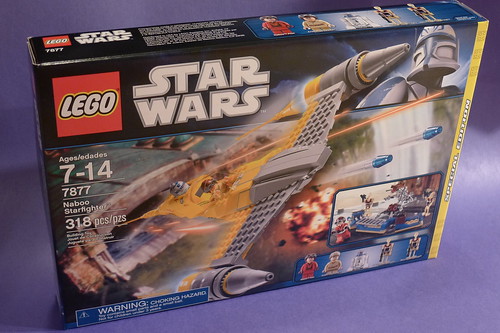 This sleek starfighter was one of the few memorable starship designs to come out of the Prequel Trilogy. Itâ€™s one of the very few I liked, with the clean and polished appearance contrary to the dingy, beat-up ships with character in the Original Trilogy. It wasnâ€™t like the X-wing of old, a ship that stayed with Luke over the films. Instead it was a means to move young Anakin from point A to point B and blow up a Trade Federation Control Ship, only to be forgotten by the characters, and later to pop up for a few seconds worth of screen-time to become nothing more than a background ship. 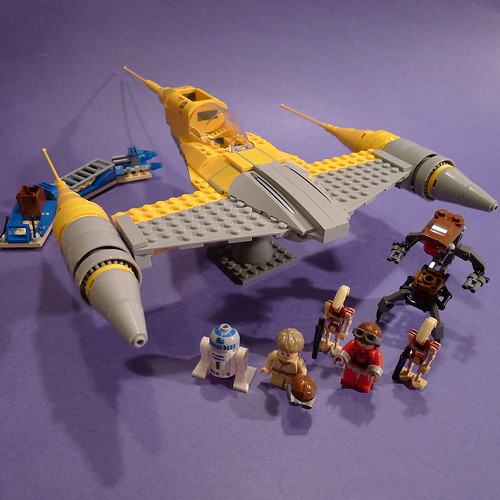 7877 represents the fourth iteration of this yellow and chrome (or gray, in Lego’s case) starfighter. The first Naboo Starfighter (7141) was released in the first batch of Episode I sets way back in 1999. It was a lump of 179 bricks barely resembling its on-screen counterpart. It included Anakin, R2-D2, two plain battle droids, and a cart. There were three things about the 1999 version I liked (and still like): the clear canopy, the printed slope with screen-accurate computer display (which only appeared in two sets, the other being 7163 Republic Gunship), and the $20 price. 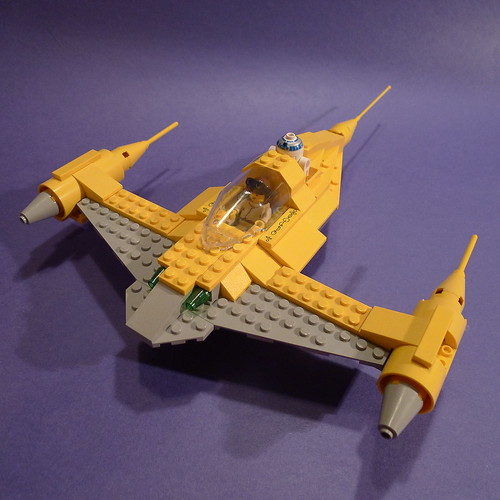 The second version of the Naboo Starfighter showed up in 2002 as an Ultimate Collector Series set (10026). A major departure from earlier UCS sets, such as the X-Wing and TIE Interceptor, this UCS was small and lacked the detail found in the aforementioned sets, but it made up for these shortcomings with beautiful chromed pieces. Sure, it made the small set of 187 pieces seem expensive at $40, but it was so nice to look at. 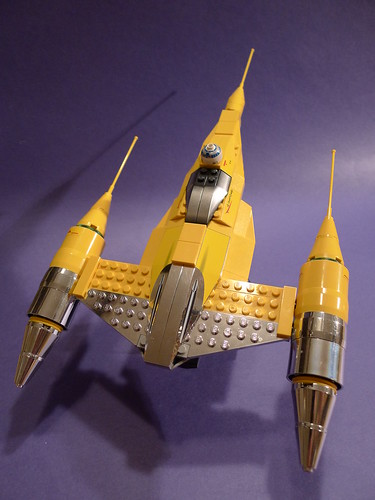 The third version (7660) was a massive improvement over the original. It didnâ€™t have chromed parts, but it actually resembled what we saw on-screen (minus that odd gray line behind the cockpit). Plus, it included a Vulture Droid and a Naboo pilot to give Ani some much needed time off from being the sole pilot for the Naboo forces (R2 doesnâ€™t get a day off). This 280 piece set was $30 when it hit stores in 2007 and at about 10 cents per piece, I donâ€™t know who was complaining (yeah, Iâ€™m sure someone was). With the Vulture Droid and the spring-loaded missile launcher, it had excellent playability. (Note: My pictured 7660 is modified. R2 isnâ€™t covered in the official set.) 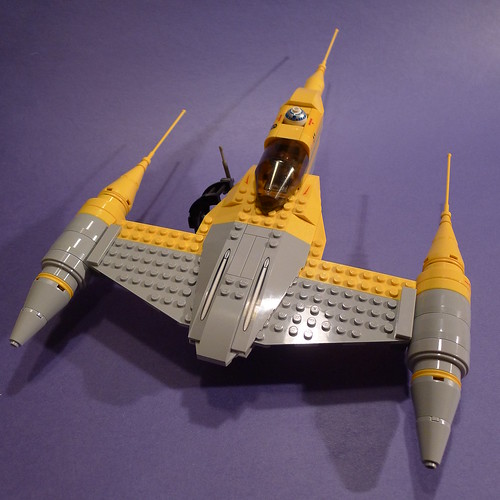 When the Target cashier scanned my new 7877, he said to me, â€œWow, thatâ€™s pricey.â€ Seriously. As my credit card slid through the reader, I replied, â€œYes, it is.â€ Driving away from Target (where this set is a retailer exclusive), I thought, Why did I buy this set? Why did I spend $49.99 (CAD 59.99/EUR 49.99) plus tax (and gas) on this set? My justification: Iâ€™m a fan of the ship. I own all the previous versions, so why not? And who can say no to that awesome box art (I mean really, look at it). Not me, obviously, but I didnâ€™t give it a whole lot of thought when I purchased it (actually, I intended to buy the pod racers, but those werenâ€™t in stock yet). As I continued home, I put my reservations about what I had spent in the back of my mind. After all, I hadnâ€™t yet built it. 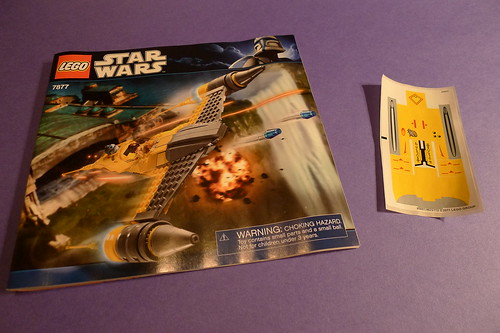 But then I did. Standard contents: instruction booklet, sticker sheet, numbered bags, nothing unusual. The modified, clear canopy is a whole-heartedly welcome variation. It isnâ€™t quite as sleek as the previous versions, but I canâ€™t complain since the hinge-bar now means I donâ€™t have to completely remove the canopy to get at the interior. The downside is the canopy doesnâ€™t lock down completely. Thereâ€™s a hair of a gap where the canopy meets the body of the ship. Not a big deal since the grip on the hinge is tight, so it wonâ€™t flop around, but I noticed it once so that means Iâ€™ll notice it always. 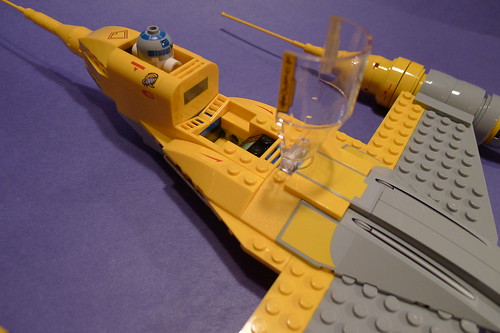 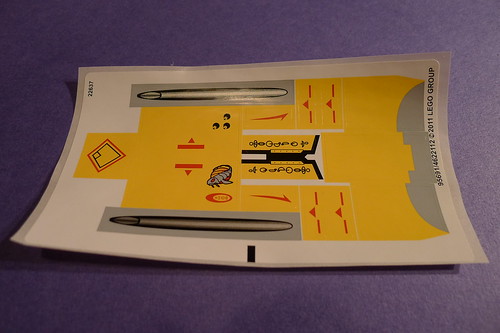 7877 stickers are color-matched much better than the stickers in 7660, which were the wrong shade of yellow and looked terrible, or mine were anyway. Here, my first complaint with the stickers is the ridiculous gaps present toward the front of the ship. Even from afar theyâ€™re noticeable. If you look at 10026, youâ€™ll notice the stickersâ€”serving the same aesthetic functionâ€”fit perfectly. My second complaint: about an hour after building, the stickers around the droid socket started to peel. I havenâ€™t been able to get them to stick. I may have to contact Lego for a replacement sticker sheet. 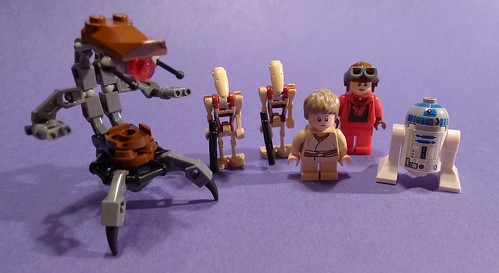 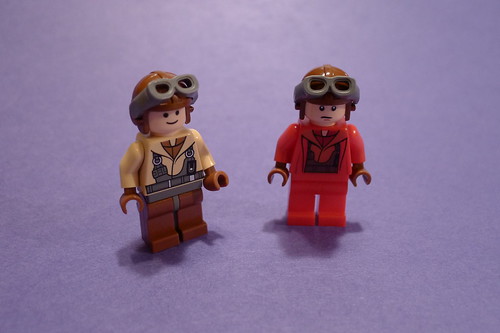 I can tell you, I didnâ€™t buy this set for the figures, which out of the entire summer 2011 line-up are the least interesting . Like 7660, we get an additional pilot. This time, heâ€™s red and heâ€™s had it rough. Gone is the idealistic smile, replaced with an expression of pessimism. I guess heâ€™s keenly aware of the price of the set heâ€™s in. His head isnâ€™t unique to this set, but his torso, with single-sided printing, is. I wouldnâ€™t call it much of an improvement over the tan version, just different and perhaps more accurate to the film. 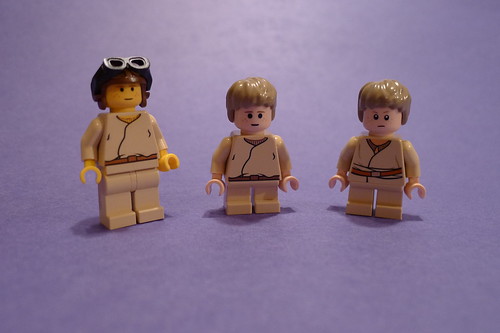 Anakinâ€™s gone through some changes since the 90â€™s. For one, he lost weight a few years ago, and two, like the generic Naboo pilot, heâ€™s lost a lot of his idealism, going from a subtle smile to the hint of a frown. 7877â€™s Anakin is identical, font and back, torso and head, to 7962 Anakin, minus the gray podracing helmet. Twice the goggles, twice the protection in space battles! 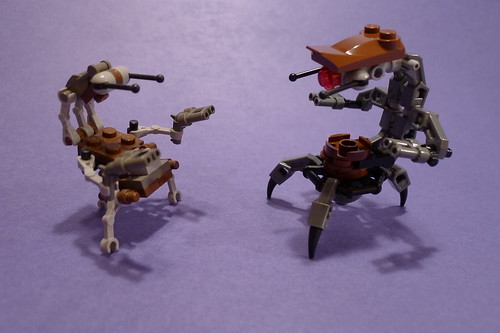 Someoneâ€™s been juicing. I donâ€™t have the other recent droidekas for complete comparison, but the evolution is startling. This thing is comically massive next to the other figures and next to its older brother. It doesnâ€™t form up into â€œball modeâ€ any better than the old version and it isnâ€™t any sturdier, just bigger, bulker, and uglier. The clawed feet are a nice touch, but overall, an improvement, this is not. Iâ€™m glad I bought those extra Jedi Defense Iâ€™s (7203) when I had the chance. 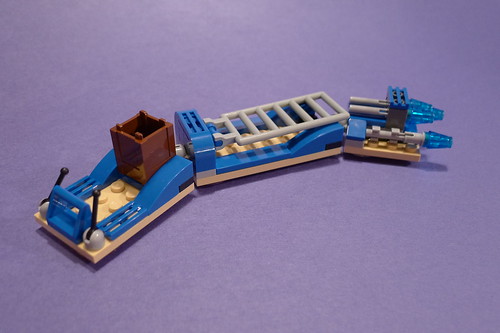 Instead of a Vulture Droid, you get three droids (well, four, but itâ€™s just R2) and a sled thing. This isnâ€™t cool or interesting like the rebel sled from the original X-Wing (7140) or the cart thing from 7141, this is more on par with the sled from the last A-Wing set (6207). I canâ€™t remember if it has a filmic counterpart, but come on, how boring can you get? From a Vulture Droid to a sled thing? Of course, Iâ€™d still be complaining if they had included a Vulture Droid (â€œCan these designers be more unimaginative?â€ Iâ€™d ask). It does carry extra flick-fire missiles though, if youâ€™re into that sort of thing.

Now to the starfighter itself. At first glance, it looks very similar to 7660 and yeah, it is. Side-by-side, the body of 7877 is sleeker than 7660, but only slightly. The unsightly studs in front of the cockpit are gone and, well, thatâ€™s about it beyond the clear canopy. Somehow the nacelles of 7877 managed to become less sleek than the previous version thanks to two noticeable gaps in each. 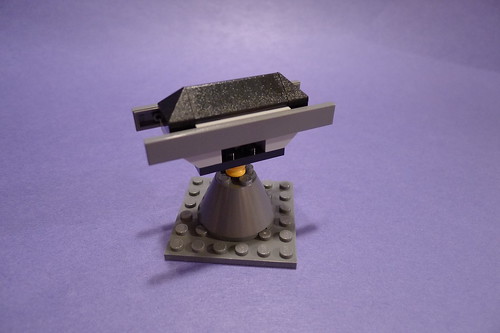 On the underside, the spring-loaded missile launcher has been replaced by two flick fire missiles, so donâ€™t expect to blow up any Trade Federation Control Ships with this one. The only visible â€œadvantageâ€ to removing the spring-loaded launcher is the flatter profile and the front is quite flat. Oh, and the incorporation of a stand. 7660 had a stand too and that one served as access ladder (yay, playability!). This one is just a stand and a loose one at that. Place the starfighter on it and it becomes a ride for the minifigure. Ah, nothing beats countless hours spinning in a circle. 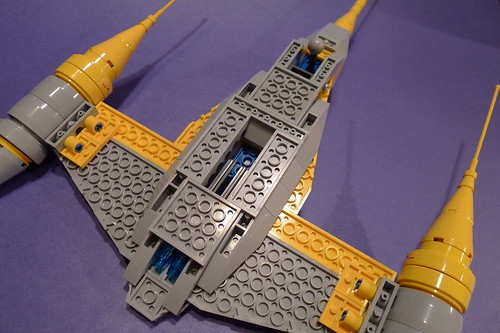 Also removed from 7877: the droid hatch under the ship. Instead, we get a modified flick-fire mechanism, which protrudes from underneath the ship. Thatâ€™s right, instead of loading R2-D2 in the bottom of the ship (which was nifty, but pointless in 7660 to begin with since he could be inaccurately top-loaded as well) you can launch him out of the top. Because thatâ€™s how it happened in the movie, right? And be careful when you set the ship down on a flat surface. Iâ€™ve already had R2 go on a few misadventurous flights.

If you already own 7660, I canâ€™t give you any reason to get this set. I canâ€™t recommend it for parts due to the high cost and I canâ€™t recommend it for the bland minifigures. If you donâ€™t own 7660, or any other Naboo Starfighter, or this is a set you want, wait for a sale or clearance (remember, this set is a Target exclusive so future sales or clearances may vary by store). At a lesser price, I say pick it up if you see it. Of course, if youâ€™re like me and have an irrational love for this ship, then sure, pick it up regardless, that tiny itch of regret will eventually fade. 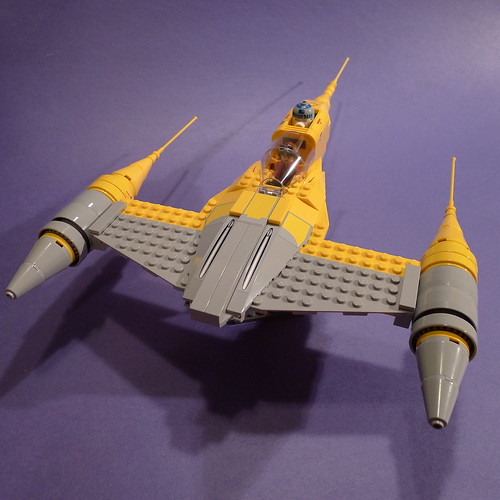 This is a well built, highly swooshable fighter, which captures the â€œrealâ€ Naboo Starfighter better than many sets tend to do this size, and the minifigures, while not spectacular in any way, complement the ship as well as you would expect. However, for the price of admission, I expect a whole lot more. At the end of the brief build, one marked with déjÃ  vu, I was left wishing that this really was pod racing.