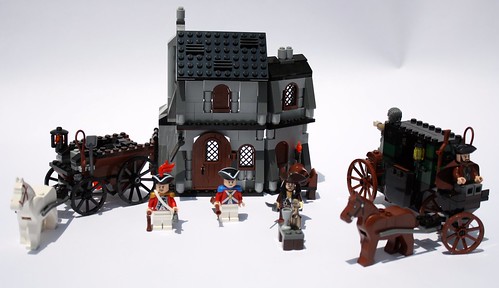 In the latest PotC movie, there apparently was an escape from London. I wouldn’t know, because I couldn’t bring myself to go see the movie. I know, it sounds strange that the guy who’s reviewing all of the Pirates of the Caribbean sets hasn’t seen the movie (I didn’t see the third one either), but you really only need to read my review on 4183 – The Mill, to find out why. I really did love the first movie, and that spirit is something that could have been captured in the sets. LEGO Jack Sparrow? It seems like a no-brainer. Who wouldn’t want that?

4193 – The London Escape, is the mid-priced ($49.99) set in the PotC line. London in this case is 1/3rd of a two-story building (no floors though, people in Ye Olde London hated floors). There are also two horse carts and five minifigures, so… it’s really more of an Escape from one person and a poorly constructed facade. It could be movie accurate though, if they went old-school and just built the front of the building.

We’re treated to five minifigures in this set, and a different bunch from most other sets. We get the obligatory Jack Sparrow, the more expensive variety that’s done up in red and brown instead of blue and white. This is the cheapest set you can get this particular variety in, so if you want it, there you go. 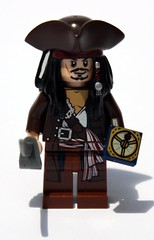 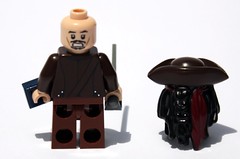 We also get Jack’s old first mate (I used Wikipedia), Joshamee Gibbs. Not a bad figure, simple, but a nice grey hairpiece (Draco’s from HP’s mold) and some tattered clothes. A good generic figure that could be worked into a lot of other builds or scenes, which is a nice change of pace. 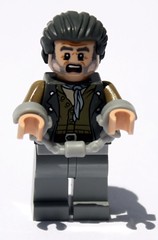 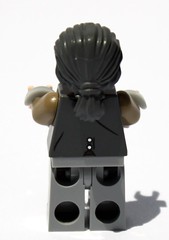 The others are more generic figures, no-named characters that fill out the scene. We get two “King George’s Soldiers,” one officer and one trooper. Both are just fleshy replacements of the soldier’s from the LEGO Pirates line, and do not incorporate any real changes. That’s fine by me, since I can either yellow them out to put them on the pirates ship, or turn all my others fleshy to make my pirates crews bigger. The torsos are varried, have good details, and can easily drop in. 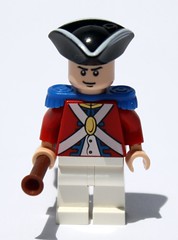 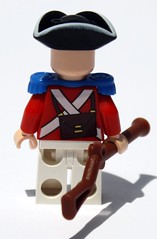 The last guy is the coachman on the pursuit cart, with a printed torso, cape, and triangular cap. Another good generic figure. 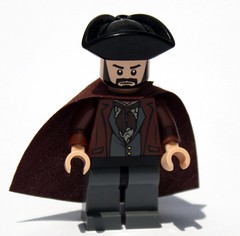 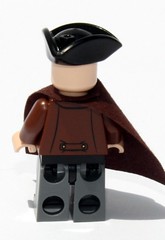 In 4183, I didn’t like the tower because of the huge wall bricks, when I felt it would look better with bricks built around the windows. This set doesn’t use the wall bricks, but goes one worse and doesn’t even build the full building. I guess these are supposed to be a tavern or something like that… must be why it came with a keg and table. 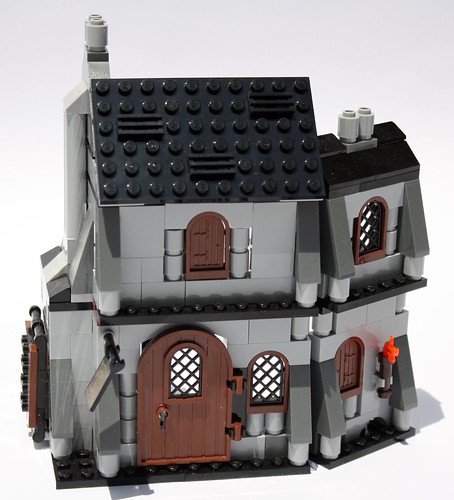 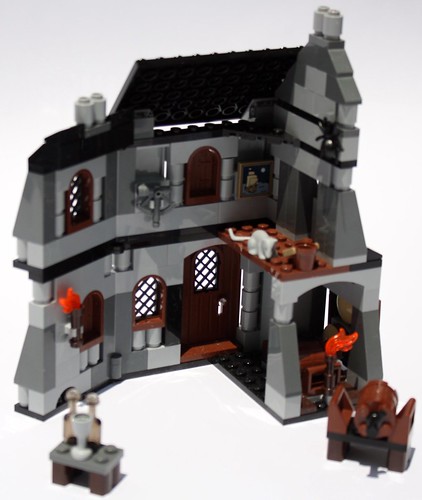 The interior is sort of implied, but in truth, the whole thing just looks awful. This is either a sadÂ  bar or a wonderful picnic area. The parts themselves are okay, you get plenty of grills and windows, but nothing here is new or unique, outside of the bottles and bucket. As soon as LEGO makes a wine bottle parts pack, they will kill the Pirates line. If these were on Pick-a-Brick, I’d be sending people out there to fill up multiple cups for me. Even the roof is just a plate slapped on a couple of hinges. 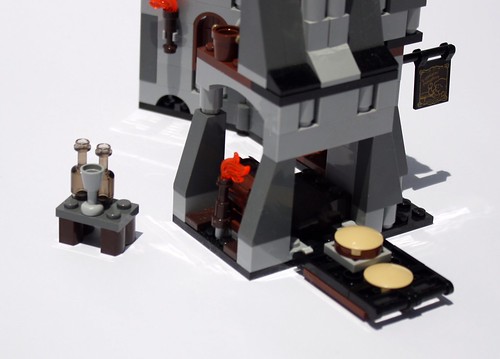 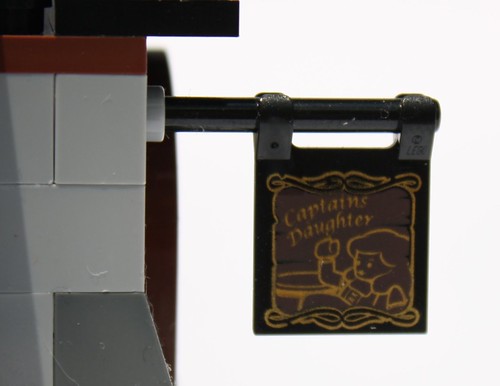 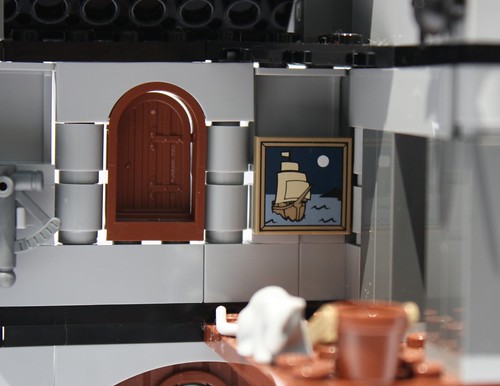 The real core of the set is the two horse-drawn carriages that make up the chase. One is just a prison-style transport (I think), with the coachman, a gun, and treasure chest on the back. Newer revisions of the set have the gold coins, which is nice, but nothing in the cart is really all that inventive or cool. It’s the same old horses, same wheels, only a couple of minifigs slapped on a simple carriage. It’s not bad, but nothing special. 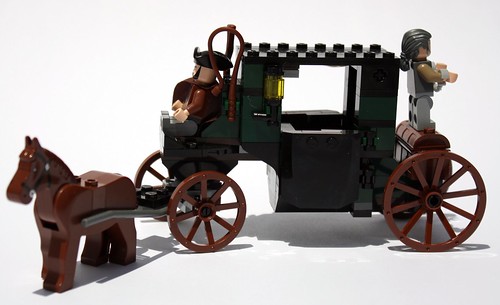 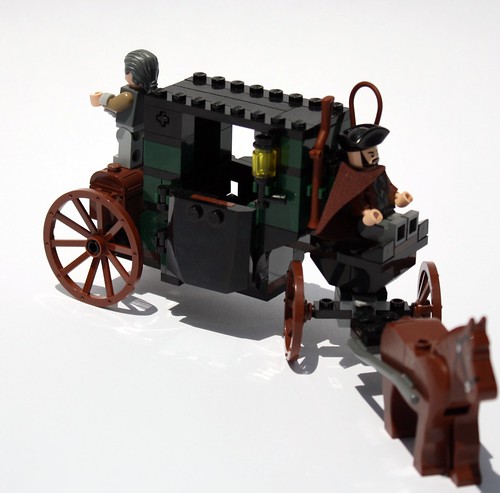 The second cart is modeled as if it was on fire, or capable of carrying fire maybe, and at least has a couple of different sized wheels. You can flip it between being on fire or not, but it really doesn’t look quite right regardless. 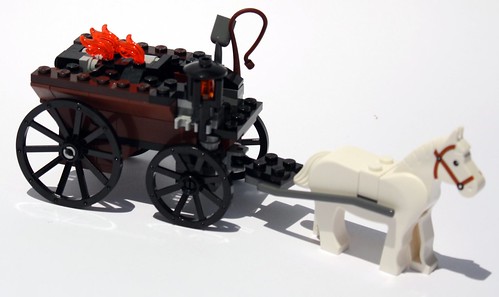 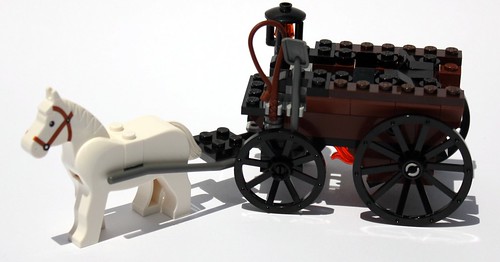 And sadly, that’s about it. By the time you finish building the set, you check and see how many parts it’s supposed to have. It says 441, but it really doesn’t feel like that. It feels like a much smaller set than the Mill, and really even than Cannibal escape. I know that it has more looking at it, but the unfinished building makes it feel like junk.

This set is kind of curious for me. The minifigs strike me as something you could really use a bunch of if you wanted to build a scene or MOC based on the American Revolution. A lot of these figures feel like they’d drop right in to something like that. This may be the worst set in the PotC line, only saved by having some good generic minifigs to toss around. Given how my other reviews have looked, that’s saying something. Then again, the Fountain of Youth set is probably worse, but not by much.

Verdict: Skip, if you want a pirates set. If you’re looking to build a revolutionary war set, get them on sale.