I received my order for LEGO Star Wars: The Visual Dictionary from Amazon.com yesterday. Sadly, this is probably the first book I’ve read since college. 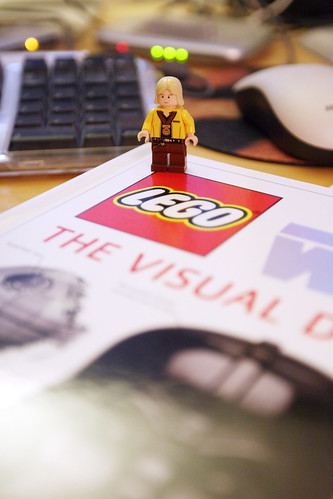 Long have I had dreams about creating a LEGO Star Wars reference book, so when I heard about DK Publishing’s book, LEGO Star Wars: The Visual Dictionary, I was both a little excited and trepidatious. Excited that a reference book would be made and uneasy that I wasn’t involved with it. But, selfish feelings aside, I looked forward to the book to see how it would be done. 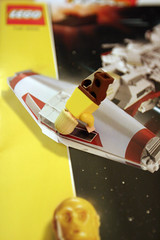 Note: To avoid copyright infringement, I am not posting any scans or photos of the contents of the book. I apologize for the wall of text, but I’ll throw in some random images to help alleviate the monotony.

The front cover boasts a very large logo of LEGO and Star Wars and an even larger image of the Darth Vader minifig. The bottom right hand corner of the cover is diecut and showcases the exclusive Yavin Celebration Luke minifig. The book feels rather thick, but it is quite misleading since half the thickness is packaging for the minifig. You flip open the front cover of the book, pull on the top layer of the plastic clamshell prison, and Ceremonial Luke is now free to join the rest of your minifig population. I’m not sure how else the minifig could have been packaged and included along with the book, but it certainly won’t stop sticky fingers from acquiring their hands on the figure without purchasing the book. 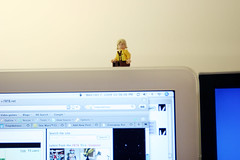 The book is organized by theme, dividing all the sets up into four chapters, Movie Saga, The Clone Wars Saga, Specialist Sets and Beyond the Brick. I skipped ahead immediately to Beyond the Brick check out the community section and see which members of the LEGO community got a nod or mention. Sadly, FBTB is not mentioned, but I was happy to see Mark Borlase’s Hoth Rebel Base included as well as Nathan Sawaya’s Han Solo in Carbonite, Tim Goddard’s Imperial Base, and The Brickish Association’s Mos Eisley diorama. There is an interview with Jens Kronvold Frederiksen, Design Manager of the LEGO Star Wars team. The most interesting photo in the chapter though is a picture of every single LEGO Star Wars minifig ever made, mounted on a series of gray baseplates categorized by franchise. The picture is small, but one can still make out a few details such as three different C-3PO minfigis, two different gonk droids, and a series of protoypes. 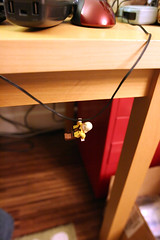 After poring over Chapter 4, I went back to the beginning and thumbed through the rest of the chapters. There is a timeline in the introduction, showing which sets were released in what year and what franchise they belonged to. This section could have been a real treat, as I think the packaging for the sets itself has a certain level of artistry and historical appeal, but the images are so small, it’s nearly worthless. Still, I had to remind myself that the book is intended for a younger audience and since it carries the Visual Dictionary moniker, it isn’t intended as the end-all, be-all reference book. 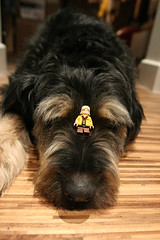 The majority of the photographs used for the publication were provided for by The LEGO Group. There are a handful of new shots but the feeling of deja vu is overwhelming since you’ve basically seen everything before on packages minus the background or on LEGO’s Shop@Home website product pages. The book does provide some nice large images of the minifigs. It’s a little disconcerting though to see a minifig image printed so large it completely dwarfs the image of the set it came in. Despite this book not being sold as a collector’s reference manual, it still would have nice to get clearer, more detailed pics of sets at the cost of smaller minifig images.

Each photo in the Visual Dictionary has at least one notation of a specific feature on a set or minifig. There isn’t a lot of text treatment to the labels, no border, background color, or anything else, just the label and a line pointing to the feature that the label was describing. So when you’re skimming through the book, each page is a series of images, and an ocean of black text on white background. I may exaggerate slightly, but it feels like you might be missing a label to read since they are a little hard to differentiate apart from the rest of the flavor text on the page. I guess what I’m really trying to say is that the pages feel cluttered with all the content crammed onto all 96 pages. There are “Brick Facts” scattered throughout the book giving a little bit more detailed information about a particular minifig, set, or aspect of the LEGO Star Wars universe. One great aspect of the book is the “data boxes”. Each data box is placed next a set and gives the set name, the year of release, the set number, the number of pieces, and the franchise the set was based from. It does not give the number of minifigs included in the set, nor are there any data boxes for any of the minifigs. For a few of the more popular characters that have appeared in multiple sets, it does give a brief rundown of which sets the character was included in. 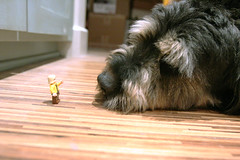 One of the things I was most impressed with in the book was the inclusion of every set released to date, including 10198 Tantive IV. There are a few errors to spot in the book if you look hard enough. The omission of 10134 Ultimate Collector Series Y-wing Attack Starfighter in the section devoted UCS sets was a pretty glaring one in my opinion. 10134 is the most beautiful UCS set ever made, second only to the Millennium Falcon and its only appearance in the entire book is in the timeline’s tiny thumbnail gallery. Another error I spotted was the photo for the MINI V-19 has the set sitting upside down. 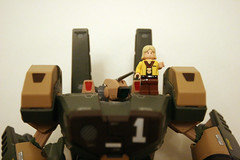 I have to remind myself that the book is targeted towards a younger generation, ages 7+. How do I know? It says so on the cover. For a kid just getting into the hobby and whose parents may not have the deepest of pockets to buy all the discontinued sets aftermarket, it’s a nice little addition to the bookshelf to see everything LEGO has ever done with the license from 1999 to 2009. That being said, I can’t recommend it to any AFOL’s of the line who’ve been around since the beginning. Other than the exclusive minifig, there isn’t enough there that would appeal to the demographic. And for the diehard fans? Well, let’s be honest here, you’d buy it anyway.

And if you’ve read this far into the review, go ahead and send me an email to giveaways@fbtb.net with Visual Dictionary as the subject. You’ll be entered into a random drawing for a copy of the book (subject to eligibility, read the giveaway rules for complete details)! You have until midnight Pacific Time October 15th 2009 to enter.