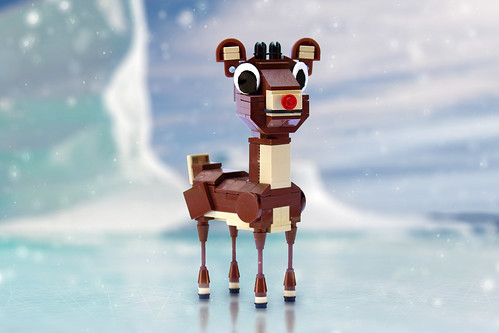 Carson Hart recently won an exclusive Green Lantern minifig with his Lantern 9000 and now he’s won me over with this adorable rendition of everybody’s favourite Reindeer.

You might be thinking “what does this have to do with Star Wars or Harry Potter?” and admittedly, nothing. It does however share a great deal with possibly my favorite cartoon of all time, the 1967 Spider-man series. A large portion of the incredibly talented voice cast worked on both shows. Billy Ricahards who voiced Rudolph was also Lizard Jr. Billy Conners and it also included Carl Banas (Head Elf/Scorpion), Peg Dixon (Mrs. Donner/Betty Brant) and Paul Kligman (Donner/ J. Jonah Jameson). Most inportantly, Paul Soles was the voice of my favourite character Hermey the elf as well as Spider-man/Peter Parker himself from the 67 series. I’ve never been able to watch one without thinking of the other and both shows are always represented on my family tree. Rudolph and Spidey are just a couple of misfits I suppose.