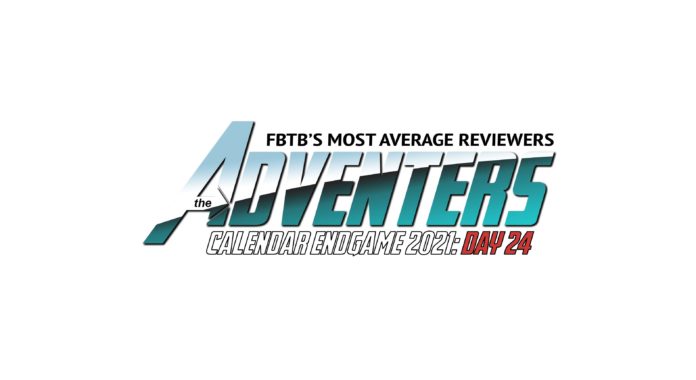 Here’s hoping we all end our calendars on a good note! The current standings going into the last day: 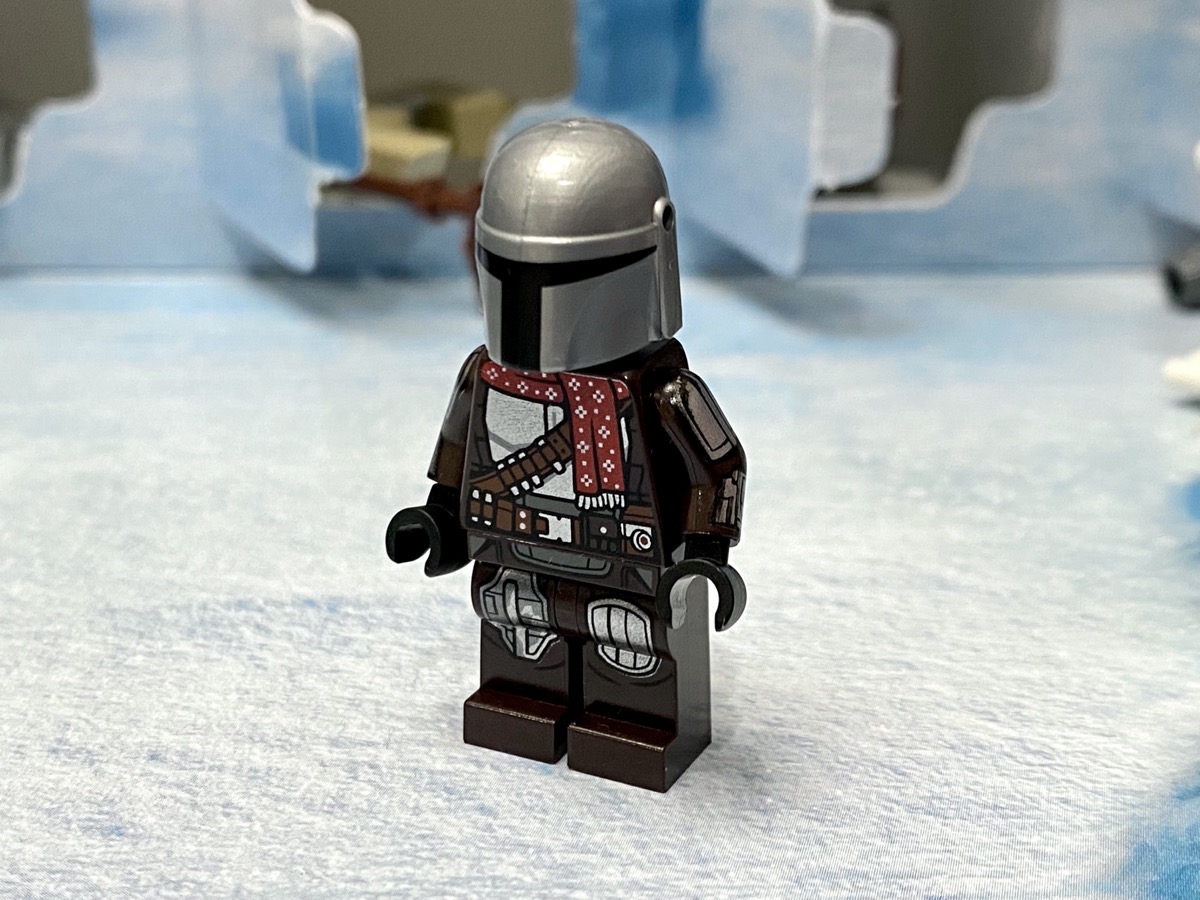 Ah Mando, there you are! The simple addition of a scarf print is, in my opinion, just PERFECT. It honestly looks like something he’d throw on in the show. The figure itself I feel is balanced just right in the printed details department: not overwhelmingly so. The printed arms are a real nice touch. I do have issue with the head though. While we NEVER see what’s under a Stormtrooper’s or Scout Trooper’s helmet, they get a fully realized fleshy head, but here we only get a blank black head for Din Djarin, whose mug we actually see. Thrice! I didn’t take a picture of the blank black head, so you’ll just to take my word for it.

The best part of the last day isn’t the Mando fig though. It’s combining him with the last couple of days into all sorts of configurations. There’s the backpack carrier: 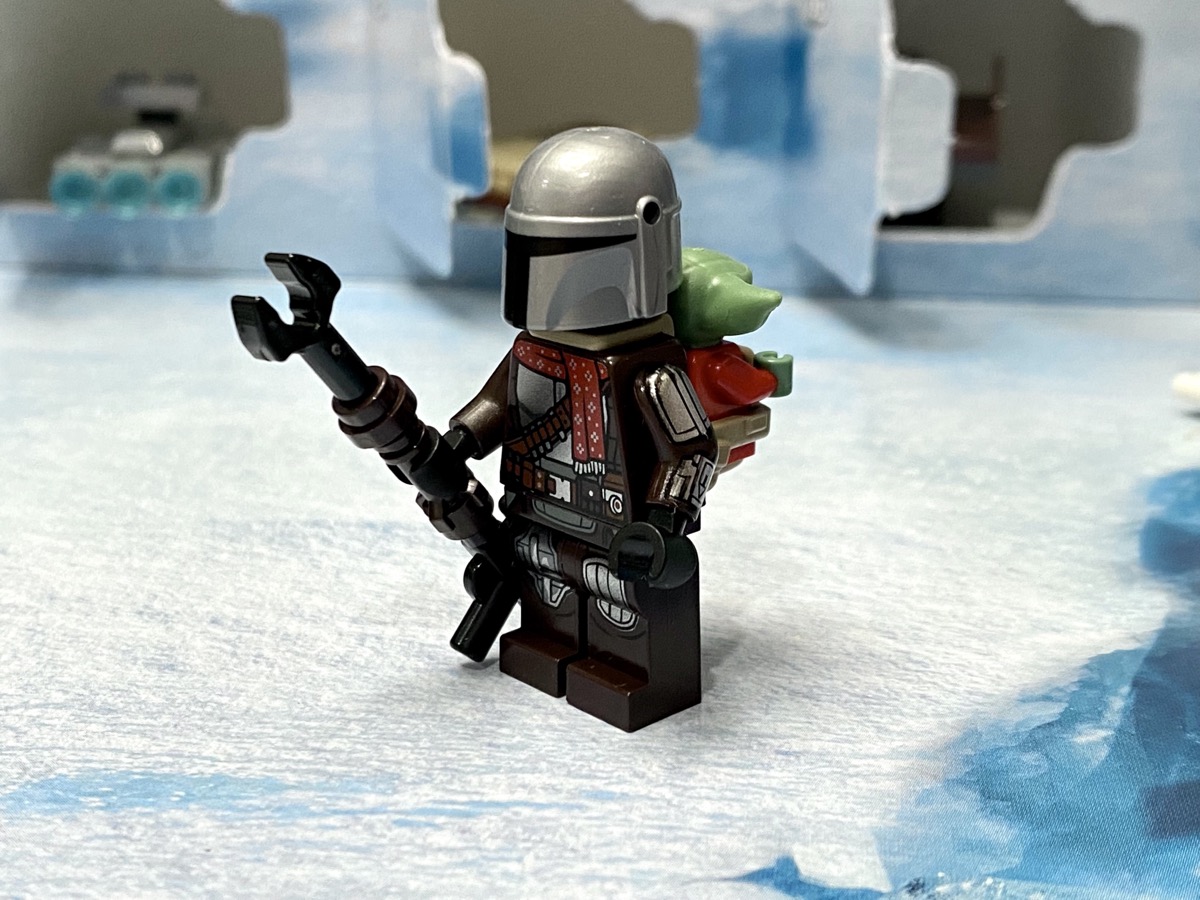 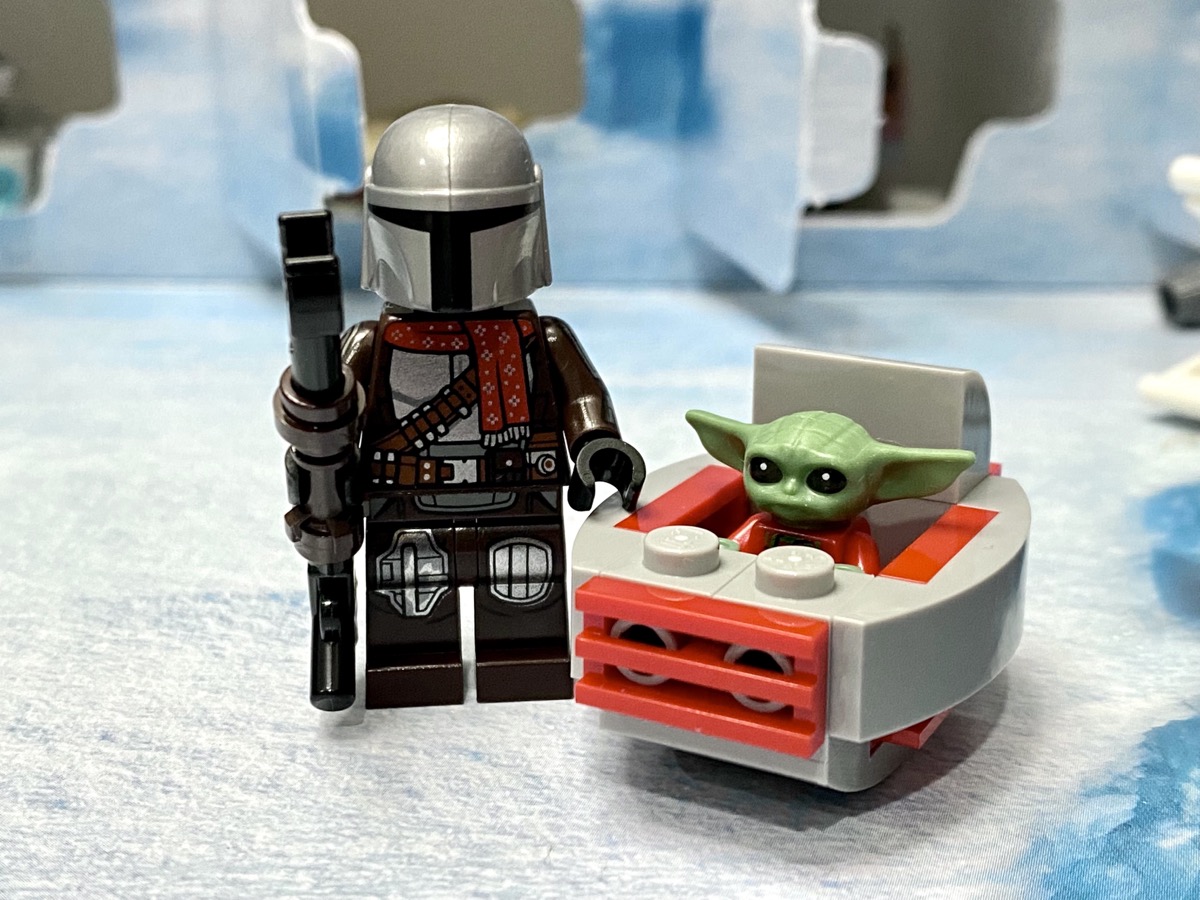 This right here is a really nice vignette in my opinion. But my favorite has to be the Baby Bjorn configuration: 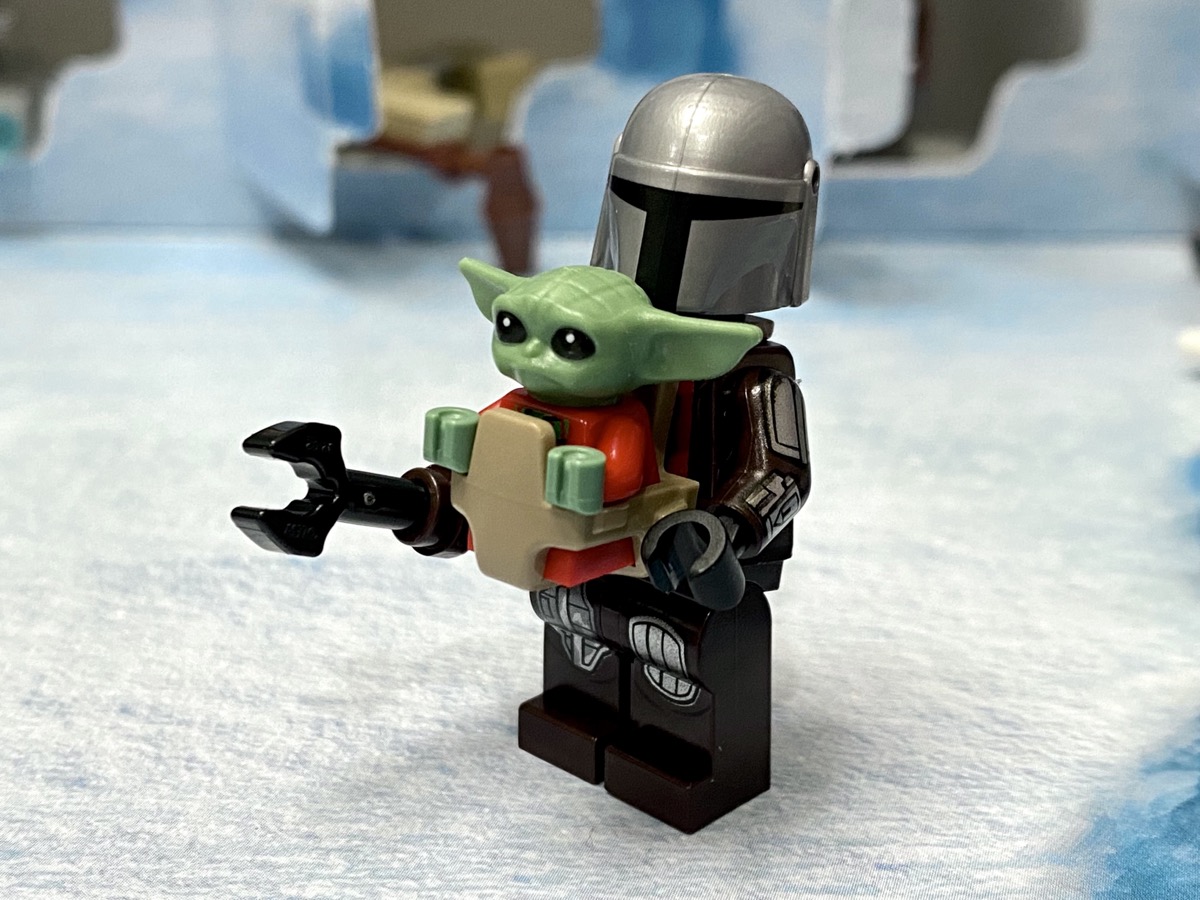 Okay, last day. Let’s end it on a good note: 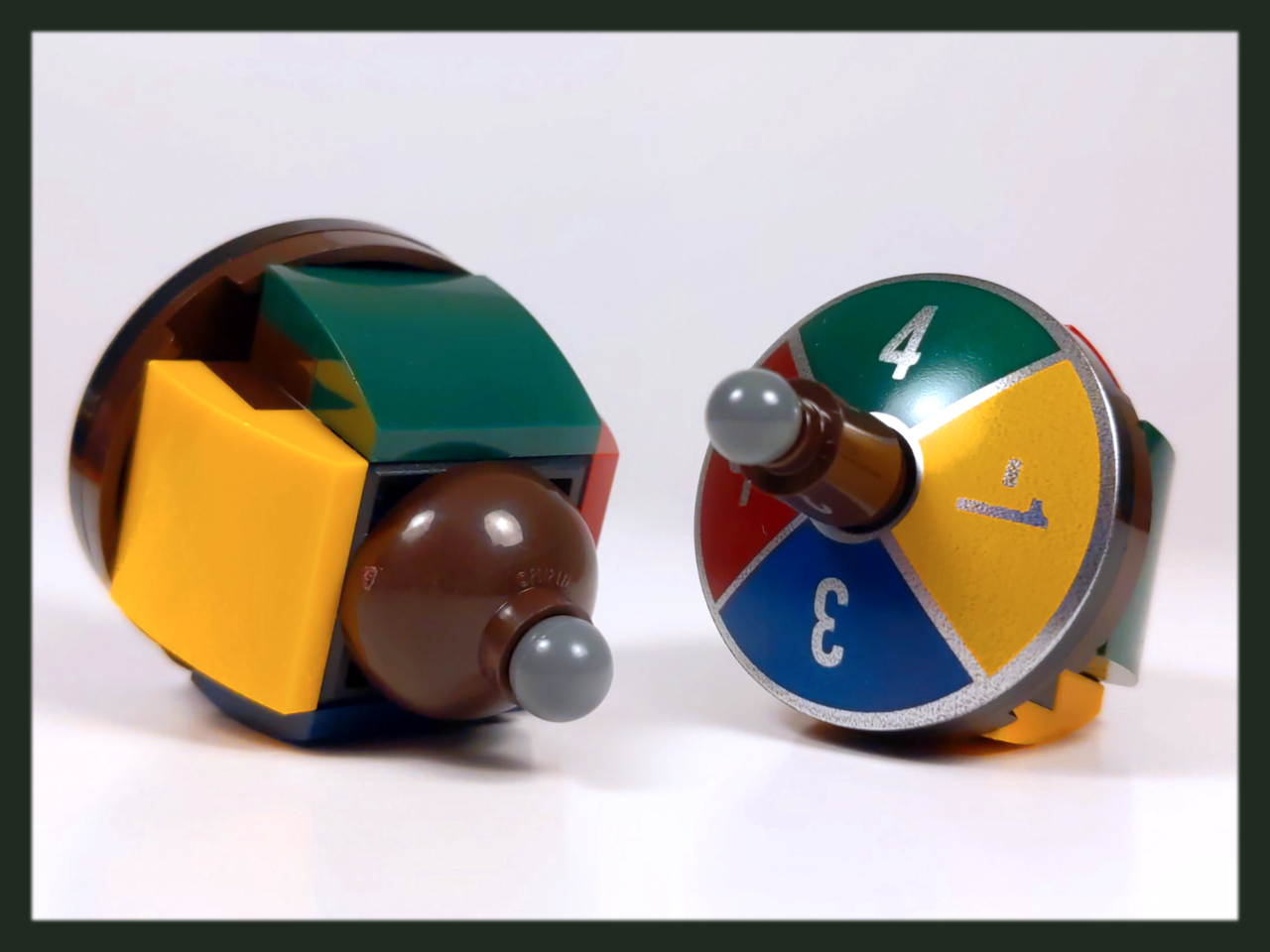 A top. Yeah, so remember how I mentioned way at the beginning that this advent calendar was a board game? So here’s the top we spin to move the minifigs around the board. Pretty much you have a 1/4 chance to move backwards. It’s sort of like the Game of Goose but even simpler, somehow.

Also, I got this top to spin one time successfully, and over the next five minutes could not get it to spin well a single time. Not sure if it’s me who’s deficient or if it’s the top.

This was a holiday Advent Calendar, right? Am I missing something with Day 24, which, traditionally, has been a full-on “Santa” version of a popular character. Let’s see… we’re missing two of the mainline Avengers still, Hulk and Cap, and could have gotten either of them. Steve in a Santa Hat or better yet Santa Hat and sweater would have been perfect. But nope. We get the Infinity Gauntlet, and a whole bunch of stones.

The calendar can’t close the deal, ends on a wet thud. It feels very on-brand, kind of, with so many ties to Endgame, a movie that seemingly is epic but when you think about it, is really full of as much bad as it is good (I’d actually rank it in the lower-third of the MCU movies). Probably best we didn’t get Steve, because they’d give us old Steve and that whole scene can go straight to hell.