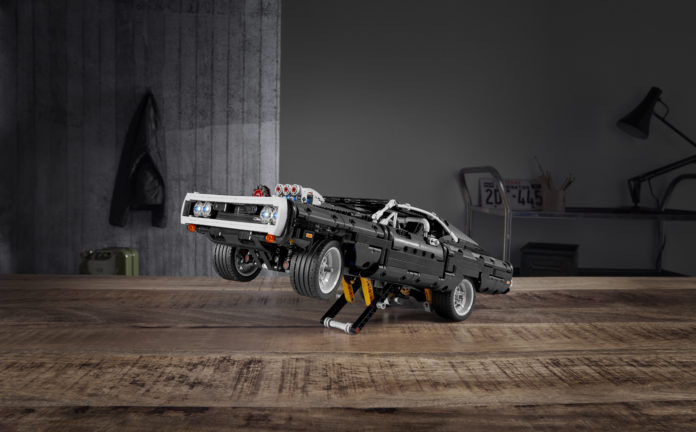 Announced weeks ago prior to Toy Fair, LEGO is finally showing off the first set based on the Fast and Furious license, and it’s Dom’s Dodge Charger.

Here’s a screen grab of the source material: 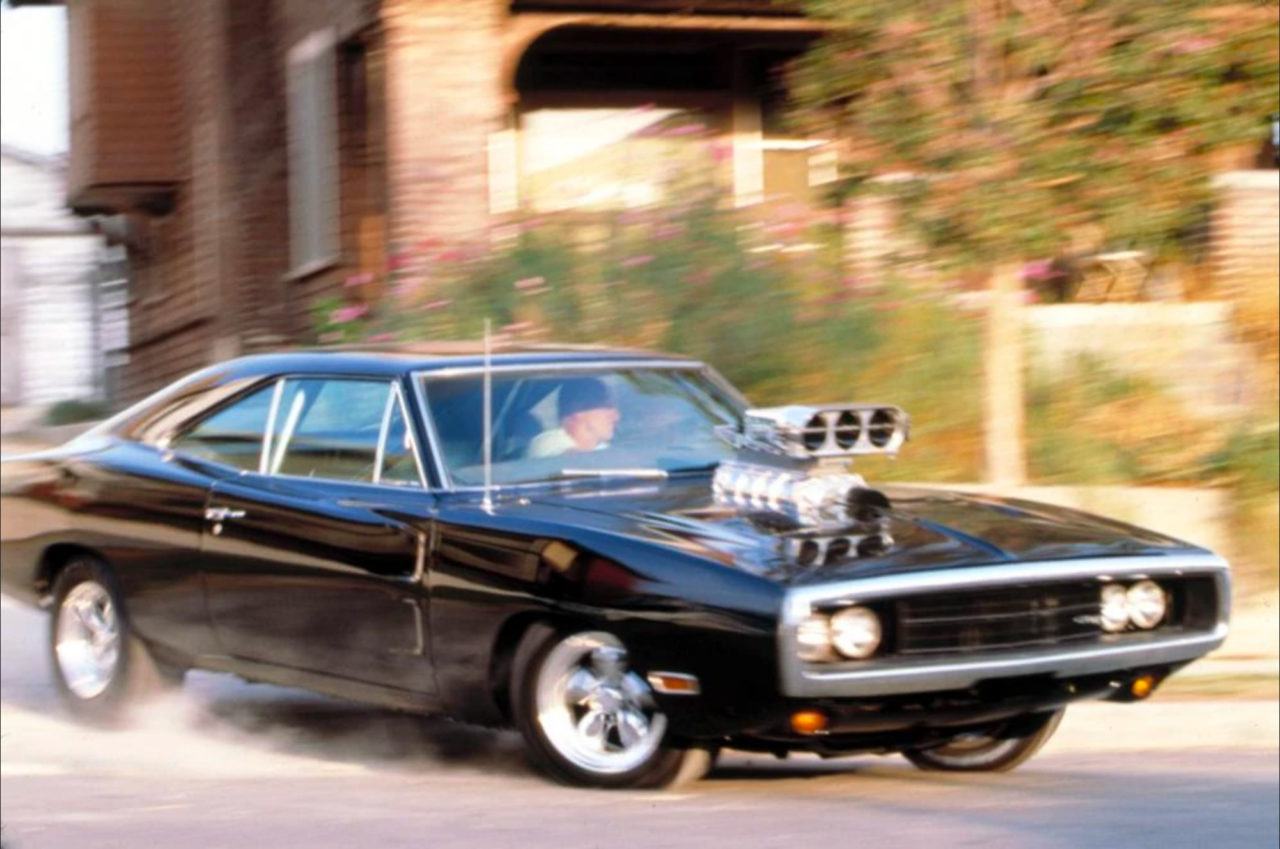 I assume it’s the correct source material. The image was lifted from Fast and Furious wiki so I assume it’s correct. I mean, how many 1970 Dodge Chargers could there be in the franchise? Anyway, I don’t think the medium translates the source material well. It’s passable but I equate it to the Aston Martin model level of execution.

Using Technic panels does introduce a subtle curve that isn’t achievable with rigid right-angle bricks. But it comes with a drawback of having these unsightly holes and attachment points. Give and take. 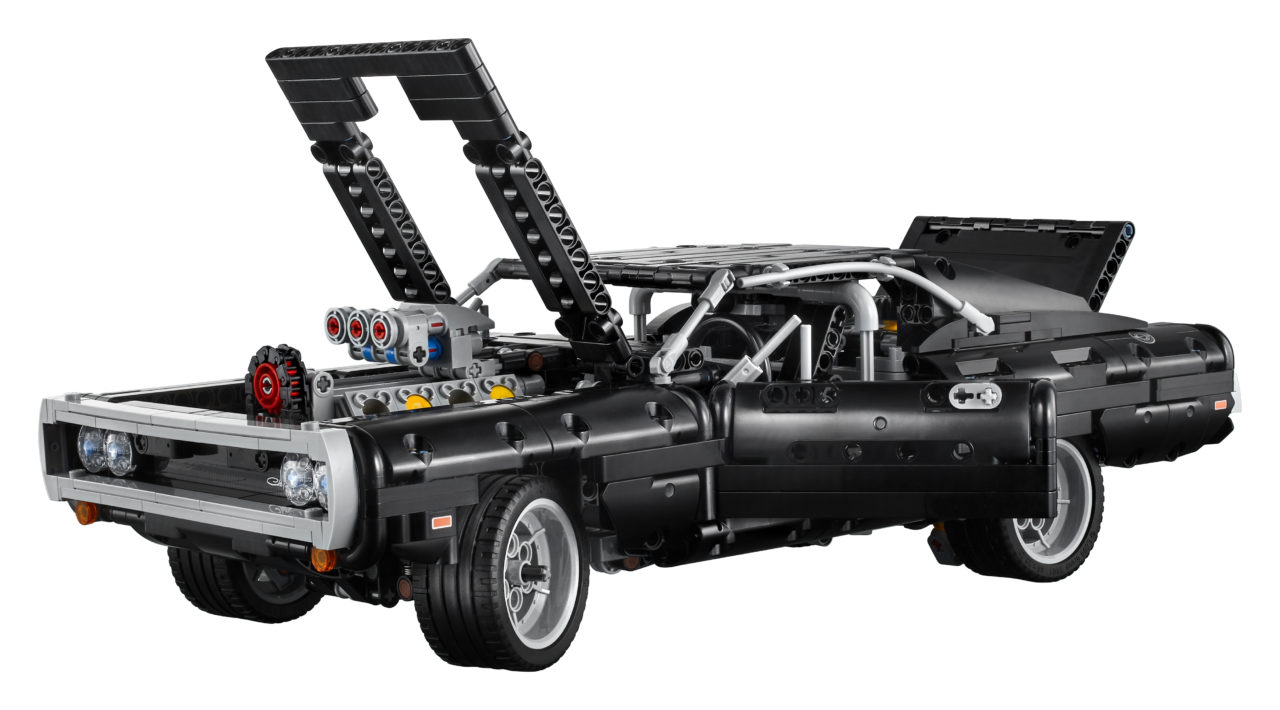 You can pop the hood open for to tinker with the V8 engine. The doors and trunk pop open for additional access to the insides. Here you can see the how the door vent windows were done, which is also not great.

I think if a clear plastic element was in place for the door windows, and a sticker was used to draw the lines of the vent window, that would have gone a long way to add the smaller details without making these kinds of concessions. I get that the there are no such elements that are the exact shape of the windows a model like this would require, but this is the precise issue where the medium is showing it’s limitations. If you squint at it, the compromises are less distinct and the model works better, but you shouldn’t have to do that on a hundred dollar model. As with all LEGO sets based on real life cars, the larger the set is, the better the final model out of the box is. Had Dom’s charger been at a higher price point wiith a matching piece count, then I’d probably have less to complain about.

Yep, 42111 Dom’s Dodge Charger will cost $99.99. You can pre-order it right now directly from LEGO Shop@Home with an expected ship date in late April.

But the fun doesnâ€™t stop once the chequered flag comes down. Once the build is complete, fans can try out Domâ€™s cool stunts and recreate the daring high-speed chases from the Fast & Furious movies with the model. And when the streets need a rest, the model can be proudly displayed in its famous wheel-stand position.

The authentic replica of Domâ€™s all-time favourite car is packed with the same realistic details seen in the films. Just like the full-size version, the hood of the LEGOÂ® Technic™ Domâ€™s Dodge Charger pops open to reveal the iconic V8 engine. Fans can feel like theyâ€™re in the garage with Dom fixing up his latest project as they build moving pistons, double wishbone suspension, a wheelie bar to show off the carâ€™s best moves and (of course) put the nitro bottles in the trunk. If things get too hot, thereâ€™s a fire extinguisher in the cockpit too.

Inspired by the action-packed scenes from the Fast saga, the 1:13 scale LEGOÂ® Technic™ Domâ€™s Dodge Charger is designed for builders aged 10+. The set will be available to pre-order from 30 March from LEGO.com and to buy globally from 27 April 2020.

Samuel Tacchi, designer of LEGOÂ® Technic™ Domâ€™s Dodge Charger, said: “The high-octane action of the Fast & Furious franchise has captured the hearts and imaginations of petrol-heads the world over. We want to inspire people of all ages to explore their creativity through building whatever their passion is, and we know fans of LEGOÂ® Technic™ and the blockbuster franchise love cool cars and adrenaline-fuelled fun. Brought together by that same passion, we worked really closely with the Universal team to bring Domâ€™s Dodge Charger to life in the most minute detail to inspire Fast & Furious fans and LEGOÂ® Technic™ builders around the world.â€

About the Fast & Furious Franchise

Over the course of nine films that have successively stoked passion in an ever-expanding audience and earned nearlyÂ $6 billionÂ at the worldwide box office, Universal Picturesâ€™ record-smashing homegrown franchise has become the studioâ€™s most-profitable and longest-running one.Â Across social media platforms, fan following for the movies and cast has grown into the biggest of any active franchise.Â On the heels ofÂ The Fate of the Furious, which debuted in theaters as the biggest global opening of all time, the blockbuster franchise has expanded to a multitude of offerings â€“ from toys and video games, toÂ an all-new animated series and successfully launched spin-off franchise. The Ninth Chapter in theÂ Fast & FuriousÂ saga â€“ F9 â€“ hits theaters around the world beginning in April 2021.

About The LEGO Group

The LEGO Groupâ€™s mission is to inspire and develop the builders of tomorrow through the power of play. The LEGO System in Play, with its foundation in LEGO bricks, allows children and fans to build and rebuild anything they can imagine. The LEGO Group was founded in Billund, Denmark in 1932 by Ole Kirk Kristiansen, its name derived from the two Danish words Leg Godt, which mean â€œPlay Wellâ€. Today, the LEGO Group remains a family-owned company headquartered in Billund. Its products are now sold in more than 130 countries worldwide.