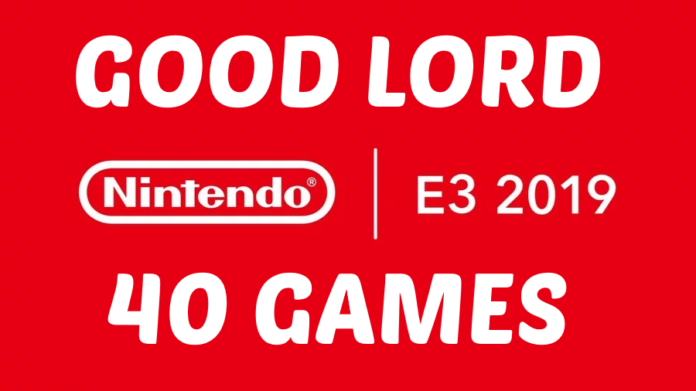 The Hero from the #DragonQuest series will be joining Super #SmashBrosUltimate! Purchase the Fighters Pass now and prepare to take to the battlefield with your hero this summer.https://t.co/hJmYO8YgVN pic.twitter.com/1YzOEgEZmA

New DLC fighters for Smash Ultimate. The Hero from Dragon Age XI, with alternate skins of the other Dragon Age characters. He (they?) come out this summer.

Your favorite bear-bird duo, Banjo & Kazooie, is joining Super #SmashBrosUltimate! Grab the Fighters Pass and get ready for when Banjo-Kazooie arrive on the battlefield this fall. https://t.co/hJmYO8YgVN pic.twitter.com/tsypQJpdBC

And, probably more exciting for American Smash players, Banjo and Kazooie, who have been rumored and theorized in Smash for the past three installments. The bear and bird show up in Fall 2019.

We saw footage from Luigiâ€™s Mansion 3. The game looks to be multiple times larger than the first two games, and includes an eight player mode. It comes out in 2019.

A little more for Linkâ€™s Awakening, including a simplified, Mario Maker-esque dungeon maker. Iâ€™m interested to see how it plays into the full game, or if itâ€™s an alternate game mode. The game releases on September 20th this year.

A surprising release on Switch is The Witcher 3: Wild Hunt. From the trailer, the graphics take a nosedive, which could draw some people away, but the writing in these games has always been strongest. Pops out in 2019.

Animal Crossing: New Horizons came out of the gate with new footage and a hint at the â€œstoryâ€ (never really important). Youâ€™ll be on a tropical island with just Tom Nook and family. I would guess villagers start moving in as you develop the island. It comes out March 20th, 2020.

Mario and Sonic at the Olympic Games Tokyo 2020 was briefly shown. Never played these games, but I figure to be shown at Nintendoâ€™s E3 it must be good enough. It releases in November of this year.

The sequel to The Legend of #Zelda: Breath of the Wild is now in development for #NintendoSwitch! pic.twitter.com/eGKFqceSAo

And, to wrap up the Direct, Nintendo showed some spooky and very Majoraâ€™s Mask-y footage from the next mainline Zelda game. Looks to be using the same engine and graphics as Breath of the Wild, as well as the same setting. Most importantly, however, is that Zelda got a haircut. No title or any other details released, but itâ€™s good to know theyâ€™re working on it and have a concept ready.

As for the rest of the games, Iâ€™ll list them and their release dates as I could find them below.

Short and sweet. Nintendo Directs trim the fat and just deliver you games.