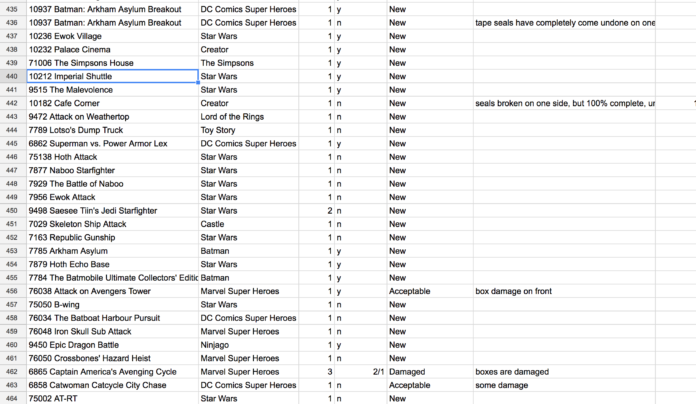 That took a really long time, a lot longer than anticipated but it is finally done. At least the cataloging part of it. I still need to price things out but that I can do at the comfort of my desk without doing any heavy lifting.

As I was going through all my stuff, I had this strange feeling wash over me. Lord knows I’ve said that I need to sell all my stuff before. Don and Ryan can attest to that. But I’ve always stopped for a couple of reasons.

That last point, that’s ones hard to describe. I’d jump through hoops to acquire things at clearance. Driving 40 minutes out of my way to score a set at half off, I’d spend more money on gas than what I was actually saving. Plus, there was no guarantee that the set would even be in stock when I got there. But if it was, oh man, the rush, the feeling you’d get. That gigantic dopamine hit to your brain. The effort to get that set would be used as justification to keep it.

How twisted is that?

And that dopamine rush? I’d still get it later ’cause looking at that set would remind me of what it felt like. Is that nostalgia? I dunno, but I had this out-of-body experience the entire time I was doing inventory. It was like a cloud had lifted and I saw clearly for the first time just how bad it had gotten.

But no more of that kind of talk now. I’m only sharing all this because, like I said in my previous post about having too much stuff, I wanted to be held accountable. So here we are. Next step is to get pricing done and contact the previous people who contacted me that expressed interest in buying. Ideally, I’d like to sell it all in one transaction or at least a great portion of it. I don’t think I can hang onto this stuff long enough to sell it one by one here on FBTB. I’ll have to figure it out as I go along.