Hoth Bricks posted this image of the next CMF series which will be based on The LEGO Movie and I have to admit it looks like a lot of fun. They list the names as: Calamity Drone, Gail the Construction Worker, Abraham Lincoln, Larry the Barista, Panda Guy, Mrs. Scratchen-Post, William Shakespeare, Taco Tuesday Guy, â€œWhere are my Pants?â€ Guy, Wiley Fusebot, President Business, Wild West Wyldstyle, Hard Hat Emmet, Scribbe-Face Bad Cop, Velma Staplebot and Marsha Queen of the Mermaids.

I personally can’t wait for Lincoln, Shakespeare, Panda Guy, the Liquid Terminator and everyone else. 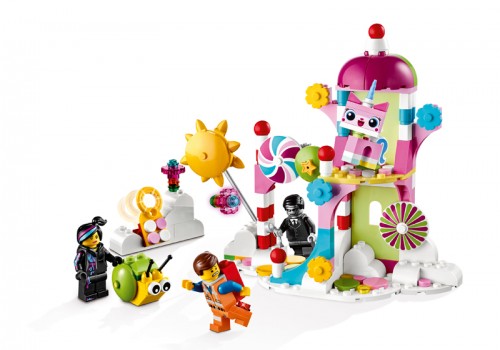 Also, Yahoo Movies unveiled the above set in an exclusive peek last night of the Cloud Cuckoo Palace set featuring a character called Uni-Kitty (voiced by the adorable Alison Brie) and a set so colourful it should rival the Friends sets on the shelves for eye burning rainbow appeal. They report the set should cost $20, so I can see multiples being picked up quickly… by me.

Thanks to chat troll murphquake for rattling the bars of his cage and waking me up.