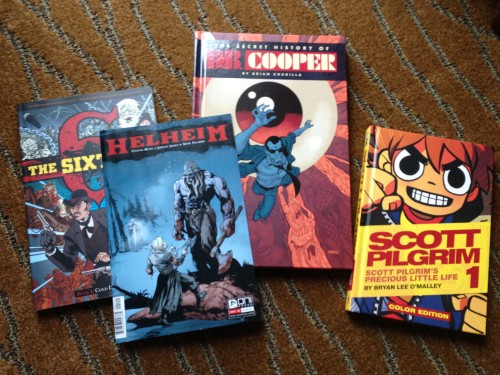 While making the rounds on the show floor here at Comic Con, I swung by the Oni Press and met forum member legobuddha. He’s an all around nice guy and set me up with some comics which you can see above. I did not know this, but they publish the Scott Pilgrim comic book that was turned into a movie, Scott Pilgrim vs. The World starring Michael Cera back in 2010. I’ve only recently begun to read comics again, just the all-female X-men comic, so I appreciated the recommendations and look forward to sitting down with my new books. So, I invite you to take a break from the stupid lines and the disappointment you normally experience at the con and go visit the Oni Press booth and browse their comics. Sometimes you forget that one of the C’s in SDCC stands for “comic”. Thanks again, legobuddha!