It is with a heavy heart that I write this post. Mike Crowley aka Count Blockula has passed. I got wind of the news last night from Ryan via text message. I had just finished watching an episode of Homeland and rushed to my laptop to see for myself. I hit Facebook and saw this: 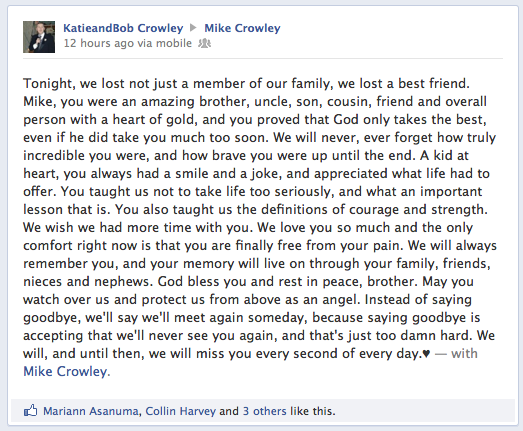 After the initial shock passed, I spent some time last night going through his flickr stream and his website (and you should too if you haven’t yet) and I was reminded at how incredibly talented, wildly creative and gifted he was. I consider myself very lucky he became part of the FBTB family. He did some illustration work for the site; I’m pretty sure he was responsible for all of the avatars on the old forums site and he was also the illustrator for our short-lived Well Played comic.

Beyond his artistic ability though, his building talent set him apart as one of the best. I remember being awestruck at his minotaur: He was a trailblazer in many ways when it came to LEGO. He was responsible for Brickfa, FOITSOP, and probably some other concepts that I can’t remember right now. Do you remember Mike’s Miniland? Well, you should: He’s got a ton of other great stuff in his photostream.

But beyond what he was able to do, it’s his character that really made an impact. The details are fuzzy to me now and hopefully I’m not remembering things incorrectly but Mike was ill for almost all if not his entire life, fighting some form of lymphoma. And if there’s one thing you should know about Mike it’s that he never let that get in the way. He had a zest for life that most of us wish we had. Reading over the facebook messages left for him just solidifies that fact. He’s touched everyone’s life he’s come into contact with. And he left us far too soon.

Knowing all that about Mike, there is one thing I will always remember him for and that’s how much he loved his niece. He adored her. He would regale me with stories of the times he’s spent with her watching old black and white Godzilla movies. Playing with Duplo. Eating popsicles. Spending the weekend together. I tear at the thought of how much she’s going to miss her Uncle Mike. Everyone who’s ever known him is right there with her though. Cue Michael Jackson’s You Are Not Alone song. We’re all going to miss him. Peace, Mike. We love ya.