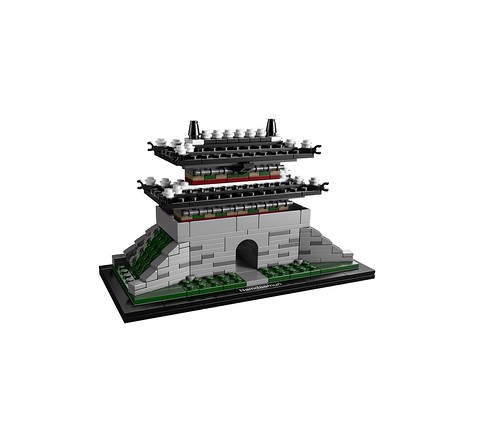 It’s nice to see the LEGO Architecture line doing a bit of a world tour with its most recent run of sets and the latest touches down in Seoul, South Korea with the Sungnyemun (Namdaemun). It’s interesting to see how the pagoda-style gateway was achieved at such a small scale and I have to give credit for the use of studs and other bits to at least attempt to capture the exotic textures of such a beautifully elaborate style.

BILLUND, Denmark â€“ LEGOÂ® Architecture, which uses the LEGO brick to interpret the designs of iconic architecture around the world, has added its first Asian landmark – the Gate of Exalted Ceremonies in Seoul, better known as the Sungnyemun.

Sungnyemun has stood in the heart of South Korean capital since 1398 as one of the most complete examples of Joseon Dynasty architecture. It is listed as the countryâ€™s foremost National Treasure.

â€œSungnyemun survives as a symbolic marker of a lost place in time,â€ says the architect and designer of many of the LEGO models Adam Reed Tucker. In capturing the essence of Sungnyemun in LEGO bricks Adam looked at the aesthetics rather than engineering, especially the use of colours, patterns and materials that define the â€˜spiritual DNAâ€™ of a culture.

Construction of Sungnyemun started in 1396 and was completed two years later. Further alterations and renovations continued over the next 600 years. In 2008 the wooden structure was completely destroyed by fire and it is expected that the restoration â€“ using traditional hand tools â€“ will be complete at the end of 2012.

The LEGO 21016 Sungnyemun will be launched officially at the Danish Pavilion during the EXPO 2012 exhibition held in Yeosu, South Korea. It will be available for purchase from June 1 in LEGO brand retail stores, LEGOLAND Stores and online at https://shop.lego.com/. The product is designed for ages 12+ and includes a booklet with facts and history about Sungnyemun. Recommended retail price is $34.99 in the US and â‚¬34.99 in most European countries.